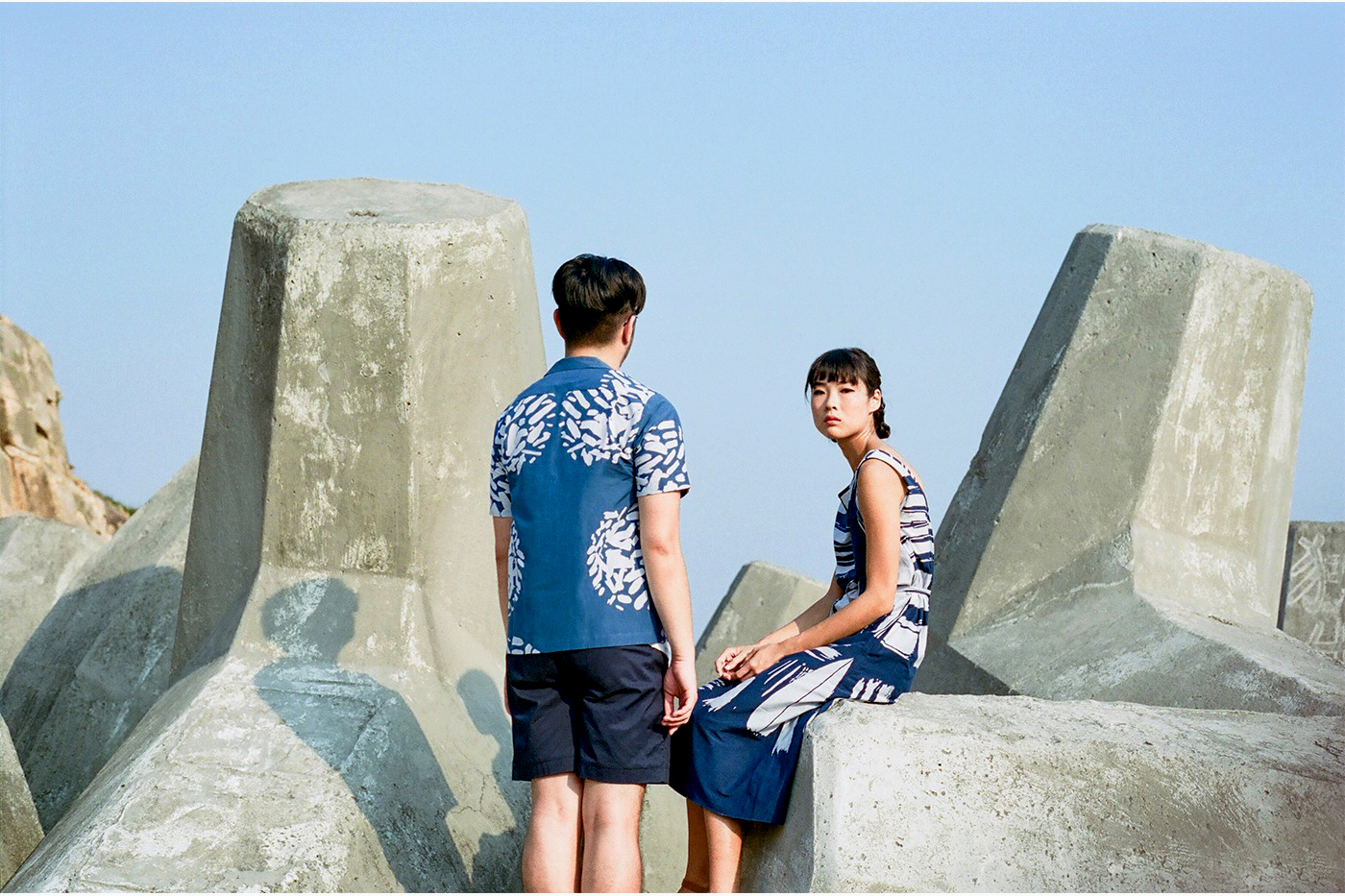 When British Chinese textile designer Elaine Yan-ling Ng first visited a series of villages in Guizhou, China, back in 2013, she had no idea what her voyage would bring about.

She ended up falling in love with the region’s sophisticated techniques for weaving and batik, a dyeing method for producing designs on a fabric with hot wax. These craft skills date back as far as the 6th century, but few are being passed along to the next generation. Most young women from Guizhou prefer to spread their wings to nearby cities; staying in their home village and weaving scarves with their mum isn’t quite what they perceive as an exciting career path.

Ng likes to call herself a “material girl in the most literal sense of the word.” She brings together textiles, electronics, and biomimicry to create innovative materials, interiors and installations at her studio workshop, The Fabrick Lab. She didn’t arrive in Guizhou with the end goal to develop products. “I just wanted to see what they’re doing and retell their story, so someone [else] could go back and help them,” she recollects. “But after three years of research and spending time with them, I felt that if I didn’t create anything tangible, no one will understand my academic story or see the value in it. So I created a few product prototypes with the villagers, and then they asked me what’s next.” “I created a few product prototypes with the villagers, and then they asked me what’s next”  says Ng – Photo courtesy The Fabrick Lab

Their zeal led to the launch of UN/FOLD, an initiative that helps the villagers preserving their heritage and support their daily living by co-creating a collection of products that do their skills justice. When Ng arrived in Guizhou, she learned that the villagers’ beautiful fabrics either get made into dime-a-dozen touristy knick-knacks, sold to their peers or end up in a museum for visitors to gawk at from behind the glass. At local markets, authentic and machine-made fabrics are often sold together to make a quick buck. “I thought this was extraordinary,” Ng says, sounding genuinely bewildered. “They’re trying to cheat on their own culture.”

So how does one do justice to an ancient craft, bring it to the 21st century and make people in cities like Hong Kong talk about it? Cue Arnault Castel, an adventurous Frenchman whose love for Wong Kar-wai’s iconic film Chungking Express made him buy a one-way ticket to the Fragrant Harbour in 1996. A decade later, he founded Kapok, a lifestyle shop that has grown into a chain with several locations in Hong Kong and Singapore. At Kapok, locally-designed products by rising talents sit shoulder to shoulder on shelf with carefully curated paraphernalia from established international brands such as Common Projects, Hay, and Maison Kitsuné.

It’s the Hong Kong-based creatives for which Castel has a soft spot. Ever since Kapok’s inception, he has dedicated himself to nurturing homegrown talent. “They’re cool, talented and nice, and I just really want them to have a career,” he says. However, Castel isn’t being charitable and he won’t compromise on quality: he genuinely wants to help the designers improve their work. “When I tell people to come back later because [their product] is not ready yet, I try to mean it. A lot of people say ‘come back later’ when they mean ‘I never want to see you ever again,’ but it’s a real thing when I say it.”

Ng is one of the designers Castel told to come back. The two met at business incubator The Mills in 2015, where Ng was pitching for the UN/FOLD Project and Castel was one of the judges. Immediately intrigued by her project and impressed by the aesthetics of the designs, he bought a few items to sell at Kapok. “I’m sitting on one of them,” he says, pointing at an indigo-dyed wooden stool. “Of course I love this, but that’s not what I am doing. I’m not doing a Future Classics furniture collection.”

He is talking about Kapok’s own gender-free fashion brand. Launched in 2016 and now on its third collection, the brand’s in-house designs echo that chic je ne sais quoi the French are famous for. On the racks hang Breton tops, plain A-line skirts and collared dresses in classic silhouettes, bringing to mind Brigitte Bardot and the films of Jean-Luc Godard. But Castel’s aim isn’t to simply sell oldschool French flair. He wants to offer something that is both unique and catered to Hongkongers’ style and needs. Future Classics’ pieces are developed with his local team, cut to flatter the Asian body type, and made with fabrics that can withstand the city’s notoriously humid climate.

Castel admits that there’s a lot left for him to learn, as he doesn’t have a fashion background. He’s not just helping local designers to improve their work, he is looking for ways to take his own creations to the next level as well. “We were too cautious,” he says of his first collection. “We figured out that a design only works when we are adding something that people can’t find elsewhere.”

Hence his decision to work with Ng. He wanted to see how they could turn handmade fabrics into contemporary, eye-catching designs that highlight the beauty of the craft. “The silhouette of a garment completely affects how it’s being perceived: the same fabric can turn into something a lot less classic if it’s not [cut in] the right shape,” says Ng.

“We figured out that a design only works when we are adding something that people can’t find elsewhere.”  – Photo Courtesy Kapok

Together with Castel, she came up with the idea to revamp two items from the first Future Classics collection, a dress and a shirt, into a capsule collection. The garments feature modern circular patterns made up of bold brushstrokes, the two fundamental shapes that Guizhou villagers have to master first when they start learning batik. Their objective is to create something that people won’t buy because they sympathise with the villagers, but because they actually want to wear it. “We’re only actually helping the villagers when customers love it, wear it, take pictures of it, have their friends ask about it and retell the story,” says Castel, gesticulating passionately. “And it’s nice for the villagers’ pride as well, knowing that they’ve made something relevant that people in big cities [love] in the year 2017.”

The villagers, no matter how passionate they are about UN/FOLD, don’t always immediately understand or oblige to Ng’s modern ideas and demands. “They often tell me that they don’t want to do something,” she says. She recalls how one time, when trying to create a woven material, it took her two weeks to negotiate the concept of changing a thread. “They’ve never been to the city like Hong Kong, so they don’t understand why they have to use brushstrokes instead of thin strokes. I have to explain why people in Hong Kong will like it. And then they’ll help to scope a new vision, and looking for ways to improve it. And that’s what we want – to co-create together.”

Ng created a 30-minute documentary on the UN/FOLD project, and when younger villagers see it, along with pictures of the Future Classics collection, it helps the younger generation feel proud of their heritage – and hopefully makes them more keen to stay close to their roots. “They’re like, ‘Actually, my mum is very cool!” laughs Ng. “We have daughters coming back [to the village] just to see us, look at what we’re doing and be trained in our programme. Then they can decide whether they’re going to take part or not. It’s very cool because I get to understand this generation, what their desires are, what they want to achieve, which helps us to understand how we can fix the situation better.”

But as much as Ng and Castel are excited about repurposing the past, both of them don’t want to think too far ahead. “If you plan too much for the future, I think it’ll ruin the current excitement, because you’ll start worrying too much about what you’re planning. This isn’t creating milestones, but fences, such as expectations, says Ng. Castel’s vision for Future Classics echoes that sentiment. “It’s all really new, we’re just trying things, and I want to keep it like that. No big goals, just keep doing what we’re doing – and have fun doing it.”

Textile designer Elaine Yan-ling Ng teams up with Kapok's Arnault Castel and a group of village weavers in rural China to create a new fashion collection.