A New Wave of Chefs Are Transforming Cantonese Cuisine 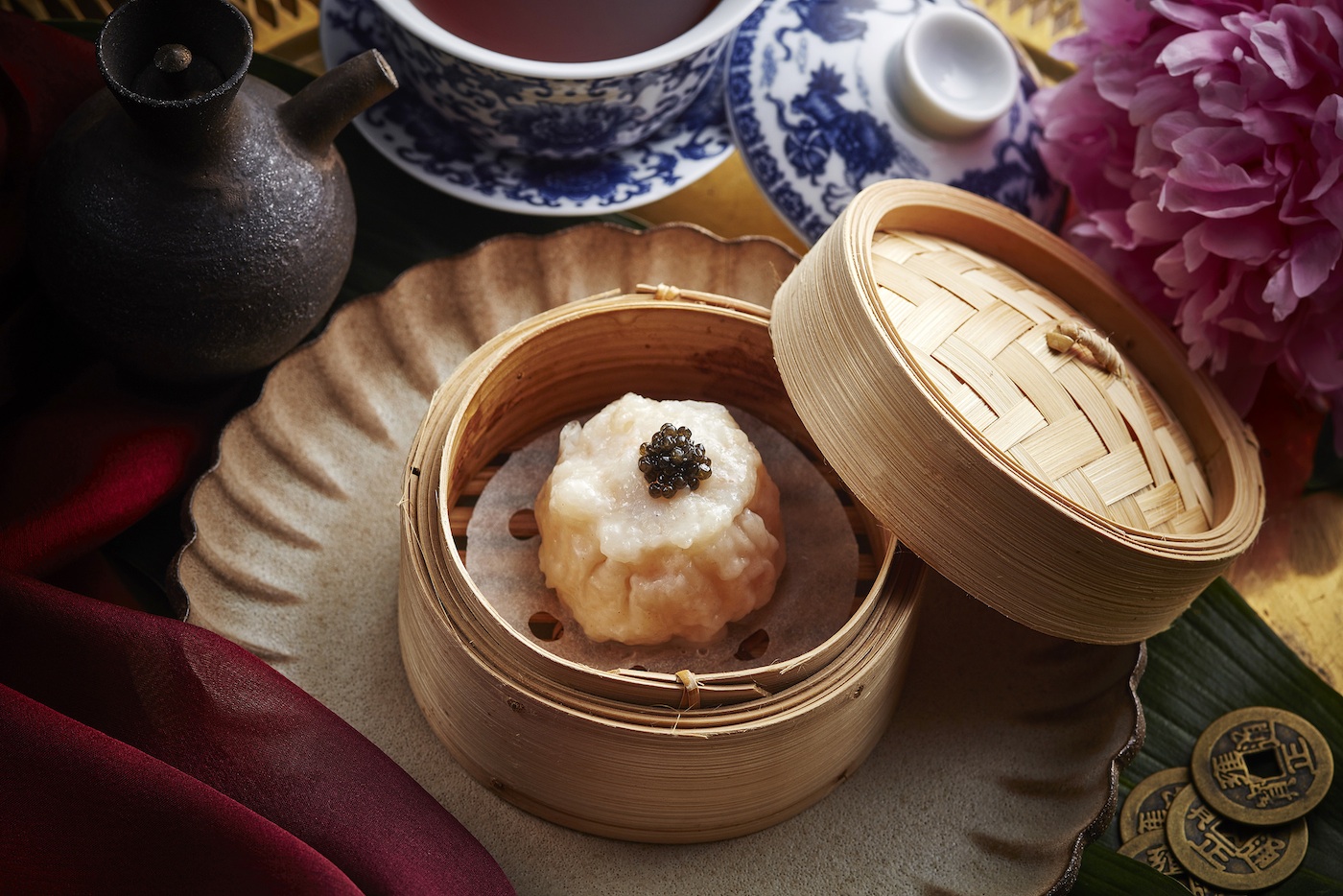 Amidst the quietly stylish surrounds of contemporary Cantonese fine dining restaurant Duddell’s, a traditional bamboo steamer arrives at the table. The lid is swept off, revealing three siu mai – an open-faced shrimp and pork dumpling that’s a staple of any typical dim sum menu. Biting into the succulent morsel quickly reveals that the dish is not what it seems. Beneath the classic juicy pork filling is a soft-boiled quail’s egg and savoury shrimp broth. Instead of the usual orange crab roe, the dumplings are topped with shiny clusters of caviar. The dish is both a symphony of premier ingredients working harmoniously together as well as the result of expert cooking technique, since both the dumpling and the egg must be perfectly prepared without over-cooking either.

Work your way through Duddell’s menu and you’ll find an abundance of dishes that elevate tried and true Cantonese classics with upscale ingredients: rice rolls filled with Iberico pork, lobster dumplings with gold leaf, pan-fried Wagyu buns. The restaurant is one of many such establishments that have begun cropping up across the city over the past few years, and incorporating luxurious or Western ingredients is only one way they’re transforming traditional Cantonese fare in new, fascinating ways.

Some restaurants might grant typical Cantonese recipes an innovative twist, while others are inspired by other regional Chinese and international cuisines, creating unique fusion dishes. The Dim Sum Library’s dan dan xiao long bao incorporates the classic Shanghainese xiao long bao dumpling casing but replaces the pork filling with a spicy Sichuanese version. Meanwhile, Dragon Noodles Academy offers its take on poached chicken with ginger, where the bird is instead deboned, rolled and tied, and cooked sous-vide.

“The explosion of new ideas is amazing,” says chef May Chow. “I think we will influence Western cuisine more instead of vice versa.” Chow launched her first venture Little Bao in 2013. The street-side hipster joint, which pairs a neon logo of a cheeky child and a bright blue doorframe with a cha chaan teng-like tiled floor, serves up your typical white fluffy bao with East-meets-West fillings like slow-braised pork belly with sesame dressing and hoisin ketchup.

Her story continues at gastropub Second Draft, where she reinterprets Cantonese recipes and ingredients in a more Western style, pairing them with local craft beers. Flower crab (which originates from the South China Sea that borders Hong Kong) and noodles combine with Chinese vinegar, julienned cucumber to delicious effect in a crab pasta. Her dishes — which draw on her experience living in both Hong Kong and North America — have earned her San Pellegrino’s Asia’s Best Female Chef award and recognition from international media like the BBC. The thought process behind her complex, mouthwatering dishes, however, is relatively straightforward and intuitive. “I play with very simple ideas that make sense to me,” she explains.

Also to be found on the vanguard of Cantonese dining is cha chaan teng-inspired eatery Ho Lee Fook, whose lively interior is filled with with neon-hued tiles and golden lucky cats. The restaurant serves up fusion dishes like Kurobuta pork char siu and “prawn toast x okonomiyaki,” a play on classic Hong Kong-style shrimp toast and a Japanese savoury pancake. Its menu takes inspiration from countries as close to home as Thailand and as far-flung as Jamaica.

Although this new generation of restaurants is reinventing Cantonese cuisine, their dishes are also firmly rooted in tradition. These chefs are hardly pulling recipes out of thin air and presenting them under the superficial guise of Cantonese food. Quite the opposite – many of them draw from firm backgrounds in Cantonese cooking to create thoughtful, modern takes on traditional dishes. They agree that there are certain elements that are essential to Cantonese cuisine, no matter how many transmutations the dishes have gone through.

“The fundamentals of Cantonese cooking always focus on using only the freshest ingredients possible and preparing the dish with integrity,” explains Fung Man-ip, executive chef at Duddell’s, who has been whipping up Cantonese dishes for over 35 years. While freshness is of course important to any type of cuisine, in Cantonese cooking it’s especially significant as it allows the chefs to achieve the strong “base flavour” that’s emblematic of the cuisine. Grey mullet, for instance, is steamed and served chilled so that the fresh flavours come through without the need of excessive spices or sauces. “There needs to be clarity to the dishes,” says Fung.

Jowett Yu, executive chef at Ho Lee Fook, elaborates on this sentiment. “Rather than covering the true taste of the ingredients, Cantonese cuisine does very little to it, adding only whatever is necessary to enhance it,” he says.

There are quintessential cooking techniques such as high-temperature stir-frying that incorporates wok hei or “breath of the wok” into the food – a complex, smoky flavour that is the result of caramelised sugars and smoking oil. The manner through which the meal is consumed can also be just as important as the way it’s prepared. “Dim sum and the act of yum cha is a culture in itself,” says chef Leung Kwok-wah of The Dim Sum Library. “It’s really meant for sharing, bringing together family and friends, and it’s deep rooted in our heritage.”

Dim sum and yum cha (the meal during which dim sum is served) are longtime traditions where the whole family goes out to eat and bond in the morning for breakfast – although the meal can easily extend past noon as more of a brunch as the group happily feasts on the small plates of dumplings and pastries, washing it all down with tea. A uniquely Cantonese way of dining without equivalent in other Chinese cuisines, coming together for dim sum is as much a gathering as it is a meal. Historically, Cantonese gourmands have always been interested in trying the widest range of ingredients possible, incorporating rare ingredients such as sea cucumber and abalone before the days of widespread commercial fishing and diving. Guangzhou and Hong Kong’s roles as trading hubs meant that ingredients imported from other countries frequently featured in dishes, too.

“What’s fascinating about Chinese cuisine is that it’s very adaptable,” says Yu. “Chinese chefs — Cantonese chefs especially — are able to create a cuisine wherever they are in the world.” Cantonese chefs often work overseas and then bring what they’ve learnt back home after their contracts have ended, he explains, outlining a process he dubs a “reverse diaspora.”

Indeed, as one of the first types of Chinese food to be brought overseas by Cantonese émigrés, Cantonese cuisine is a well-known globetrotter. Immigrants from Guangdong flooded San Francisco in the 19th century during the California Gold Rush. Over the next several decades, Cantonese migrants worked on steamboats, built railroads, mined and ran businesses around the world. In 1957, over 68 percent of the overseas Chinese population originated from Guangdong – and, they brought their cuisine with them.

Contemporary Cantonese cuisine is difficult to pin down or define due to how purely experimental and personal it is, with each menu emerging quite differently under the pair of hands that creates it. That’s part of what makes it so exciting. With this young generation of chefs at the helm — a generation that tends to question why things are done the way they are in a traditional kitchen, and to strike out with their own endeavours if they dislike the answer — such individuality is only to be expected.

“The spectrum of balancing the traditional with the new is highly personal,” says Chow. But one thing that everyone seems to agree on is that this is more than a flash in the pan; it’s a movement. And it doesn’t look as though it’s going anywhere anytime soon. “I’m glad there are chefs who are really pushing the boundaries,” says Yu. “Maybe this is the future of Cantonese cuisine.”


A New Wave of Chefs Are Transforming Cantonese Cuisine

From hipster joints to elegant fine dining, there’s a new movement of Cantonese restaurants that are taking the cuisine to unexpected new places.