A Place to Escape: Hong Kong’s Beach Culture Through the Years Sometimes it seems like the beach is the only free space left in Hong Kong. In fact, it’s one of the few spaces in the city where people seem comfortable doing not much at all. Elsewhere, life is structured around activities. You go to a dim sum restaurant to eat and chat with friends; you go to a park to play basketball or walk backwards while clapping your hands. At the beach, life is unstructured. Maybe you’ll go for a swim; maybe not. The allure of lying under a parasol while staring at the water is enough to overpower any urge to make it a productive time.

There are hundreds of beaches in Hong Kong, 41 of which are managed by the government’s Leisure and Cultural Services Department. Most of them are concentrated in just a handful of districts: Sai Kung in the northeast, the islands to the southwest, Southern District on the south side of Hong Kong Island and Tuen Mun in the west. There’s a stretch of particularly scenic beaches along the Rambler Channel in Tsuen Wan that were long closed due to pollution, but in recent years they have once again welcomed swimmers. Nearly 14 million people went to Hong Kong’s public beaches last year, a number that has grown by more than 20 percent over the past ten years.

As long as Hong Kong has been a city, people have sought out its beaches for escape from urban life. In the early days, some of its most popular stretches of sand were in areas now considered to be the heart of the city, including North Point, Kennedy Town and Yau Ma Tei. Today, the most popular beaches are Repulse Bay (3.078 million visitors last year), Shek O (849,160 visitors) and Clear Water Bay Second Beach (670,000 visitors). That ranking hasn’t changed in decades. But the way people have used the beach certainly has. When the roads to the south side of Hong Kong Island were improved for motor vehicles in 1910, the city’s elite began spending their time at Repulse Bay. In 1920, the Kadoorie family opened the swanky Repulse Bay Hotel, and with a 150-foot-long verandah, a huge ballroom and a sprawling garden, it became the go-to destination for weekend dance parties and see-and-be-seen sessions of afternoon tea.

The beach itself would have been unrecognisable to a contemporary beachgoer. It was physically much smaller — just a narrow strip of sand compared to today’s artificially enhanced expanse — and lined by shacks known as matsheds. “The whole beach was lined with matsheds, delightfully cool shelters divided into a wide verandah in front where we had our sandwich picnics, and two changing rooms at the back, one for the girls and one for the men,” wrote Betty Steel in her diary, which is available on the Hong Kong history site Gwulo.

Born in the northern Chinese treaty port of Wei Hai Wei, Steel moved south when she was five, growing up in the well-to-do bubble of prewar colonial Hong Kong. She served as a secretary for three Hong Kong governors and she was a keen observer of daily life. She described the 1920s as an “era of dancing parties in the winter and swimming parties in the summer,” both of which revolved around Repulse Bay. Her diary entries about Repulse Bay are particularly informative.

In the summer Derrick, Brian, Mike and “Uncle” rented a matshed on Repulse Bay beach, and every Sunday a party of us spent the day there. … We swam before tiffin, walked on the beach afterwards, meeting friends, and swam again later. There were rafts to swim to, and water taps on the beach to wash off the salt water. Repulse Bay was the most popular beach in the Colony, and crowded on a Sunday. When walking on the beach we wore pretty floral beach pyjamas or shorts, made by our Chinese tailor. Behind the matsheds, lining the beach road, flame of the forest trees were in full bloom.

It’s clear that Repulse Bay was the domain of Hong Kong’s colonial elite. When the Kadoories built a beachside entertainment hub called the Lido in 1935, it provided change rooms that allowed the public to visit the beach without renting a matshed. Some beach regulars were already starting to grumble that it would attract riff-raff. When Lady Southorn, wife of then-Governor Sir Thomas Southorn, opened the facility, she praised it for opening up the beach to a wider range of people, albeit in a rather backhanded way: “I gladly share the sea and the shore with others, always provided they do not strew the country or seaside with banana skins and paper bags,” she said.

After World War II, when public transport improved and refugees fleeing mainland China built shantytowns in the hills around Repulse Bay, some of the old guard did not take kindly to the beachgoers’ changing demographics. “In the eyes of the best people, the tragedy that has overtaken Repulse Bay is its popularity,” lamented the South China Morning Post in an editorial. “There the underprivileged now disport themselves in great numbers, and it is not longer a place for senior officials or the well-to-do.” Other beaches had always been more democratic in their appeal. The now-vanished Lai Chi Kok Beach was a convenient destination for working-class families in Kowloon. Further west, the beaches along the Rambler Channel drew people from the fast-growing industrial suburb of Tsuen Wan. Scattered like flakes of gold along the green cliffs that line the channel, the beaches look out to Tsing Yi and Lantau, with a panoramic view of the Ting Kau and Tsing Ma bridges. One stretch of sand, Approach Beach, is lined by old cottages – little-known remnants of a time when this was a prized getaway spot for city-dwellers.

Li Kwan-yau, who ran a hardwood furniture factory in Tsuen Wan, was born in 1953 and grew up going to Approach Beach and Lido Beach, which in the past was known as 11 ½ Mile Beach, for its location along Castle Peak Road. “The beach was always crowded. It was a cheapest form of entertainment,” he says.

But it was a far cry from the pristine setting enjoyed by Betty Steel and her friends. “The water was very dirty and there was a lot of rubbish floating around,” Li recalls. “In Sai Kung, if you taste the water, it’s nice and salty. At 11 ½ miles, it tasted foul and it looked like milk tea. You couldn’t see anything. Most people did breaststroke to keep their heads above the water, but I didn’t like breaststroke. I thought it looked girly. Freestyle was a lot tougher-looking so that’s what I did. Back then, we lived in a very tough environment, so our immune systems were very tough.”

The Tsuen Wan beaches were formally closed in the 1980s, but the introduction of new sewerage systems in the past decade has stopped raw waste from flowing into the Rambler Channel. In 2017, about 650,000 people visited the once-filthy beaches. That chimes with Hong Kong’s increasing love of the outdoors. “There was an upsurge in people heading outdoors during SARS and I believe this led to long-term change,” says writer Martin Williams, who runs the Hong Kong Outdoors guide. The shock of a highly contagious disease spreading through the city pushed more and more city-dwellers to enjoy the countryside; there are now more people than ever on Hong Kong’s hiking trails. 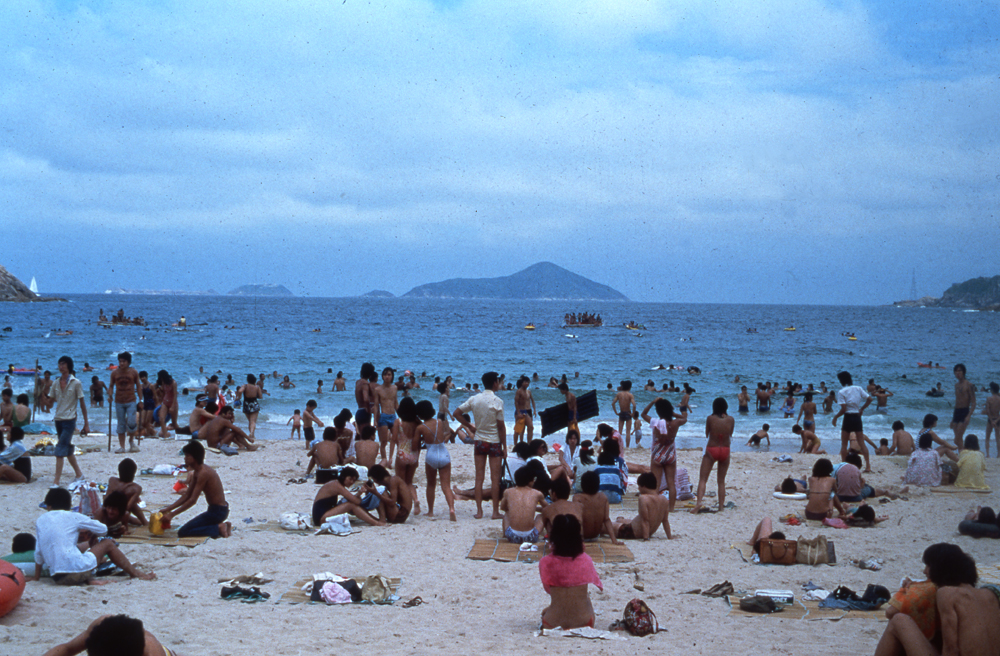 When it comes to the beaches, more and more people might be drawn by the sense of freedom they afford. (It’s a relative freedom, of course: there are still regular announcements prohibiting ball games, and each beach features digital clocks that make sure you never lose track of time.) The beach is a place with no fixed objective, an interface between the city and nature that is fun, accessible and refreshing. It’s a deeply repressed part of Hong Kong’s id, a point of escape for the residents of a high-pressure city. After all, for as long as there has been Hong Kong, there has been the beach.


A Place to Escape: Hong Kong’s Beach Culture Through the Years