Hong Kong has always been short of the single most important commodity for human life: fresh water. From the earliest days of British settlement, demand for fresh water has continually outstripped supply, due to the steady increase in population encouraged by a politically stable environment.  Tank streams were quickly over-utilised and wells sunk in urban areas rapidly became contaminated and unsafe. In the nineteenth century a number of reservoirs were built on Hong Kong Island. For a while they were adequate for the needs of the growing city.

By the late 1920s the growth of urban Hong Kong, both on the island and beyond the boundary of British Kowloon, made the need for a new reservoir extremely urgent. The only viable location was in the Kowloon hills, at the head of the Shing Mun Valley above Tsuen Wan. The project was for a long period opposed by the Colonial Office on the grounds that the reservoir would be built in the New Territories, which had been leased from China in 1898. As a leased area, logically it would revert to China in seventy years. Officials felt that it would thus be a great waste of money to build a capital-intensive scheme on someone else’s land, as it were, only to eventually hand it back to them. 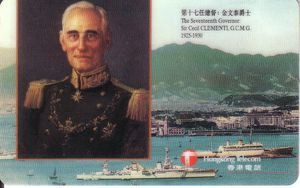 This was a view strongly countered by Sir Cecil Clementi, one of Hong Kong’s most able and visionary — and least remembered — colonial administrators. A possible solution to the problem of the Shing Mun reservoirs, in Clementi’s view, lay over a thousand miles to the north of Hong Kong. The small settlement of Weihaiwei on the coast of Shantung Province in the North East of China was leased at the same time as the New Territories, in 1898. Administrators from Hong Kong were periodically posted there, and these included Clementi’s contemporaries James Stewart Lockhart and Reginald Johnson. His proposal involved offering to return Weihaiwei to Chinese control — it was a quiet backwater and had never really prospered — in return for outright cession by China of the New Territories. By this the further growth of Hong Kong would be assured. In Weihaiwei the British had a disposable asset – and the New Territories was vital to Hong Kong’s continued growth. His proposal was rejected by the Foreign Office as unnecessary and unworkable, and likely to stir up demands from the Nanking Government for further abandonment of British concessions and privileges elsewhere in China. Yet in 1930, as a gesture of goodwill, Weihaiwei — never very much use except as a pleasant hot-weather station for the Royal Navy — was returned to Chinese rule. It has remained a backwater ever since.

The Shing Mun reservoirs were eventually built anyway, as the growing demand for reliable water supplies had overridden any objections concerning their theoretical return to China seventy years later. At the time of their construction the Shing Mun Valley scheme was the largest water scheme under construction in the British Empire. Extensive reforestation was undertaken to safeguard the water catchments. Photographs of the Shing Mun area taken in the late 1930s show large areas of thriving new forestry, in stark contrast to the treeless grassy hills in much of the rest of the New Territories.

The villages in the valley were removed and their inhabitants were resettled in Kam Tin. Rural people displaced from their villages by development were always resettled and well-compensated from early times, something that is not generally recognised today. The village built for them was named Shing Mun San Tsuen, or Shing Mun New Village. Located between Tai Hong Wai and Wing Lung Wai, the resettlement village and its inhabitants still maintain a distinct and separate identity. There are numerous old people who remember the move from the old village, now under water for decades. Even after more than sixty years, the Shing Mun people are still outsiders at Kam Tin.

By 1941 practically all of urban Kowloon’s water supply came from the Jubilee water scheme. A cross-harbour water main carried vital supplies to the heavily populated areas of Hong Kong Island. Within three days of the Japanese invasion of the New Territories, they had captured the Shing Mun reservoirs. Even though there were food stocks on Hong Kong Island sufficient to last for months, without water surrender would be inevitable – and indeed, it came very soon. Hong Kong’s largest supply of fresh water lay in what was not British sovereign territory. It could be cut off at any time, either by an invading army or a reoccupying landlord, and the urban area held to ransom.

The British failure in 1941 to safeguard this most vital commodity clearly demonstrated to any future planners that Hong Kong without the New Territories was simply not a viable entity. Nevertheless, development had to proceed north of Boundary Street as though the leased area was de jure British territory, irrespective of the expense of capital works. There was no possible alternative. Hong Kong had to have water.

After the end of the civil war in China in 1949 the population of Hong Kong increased dramatically over a very short period. All of them needed a reliable supply of water. The ongoing problem was exacerbated in the early 1960’s by prolonged periods of drought and near-famine conditions in neighbouring Guangdong province. This had the simultaneous effect of sending refugees across the border in search of food and work, and drastically limiting the amount of water the Guangdong authorities could supply to Hong Kong.

In the 1950s and 1960s, extensive reservoir construction took place at other locations in the New Territories, at Shek Pik, Tai Lam Chung, Plover Cove, High Island and elsewhere. All of these acted as a reserve supply and decreased Hong Kong’s reliance on water piped from the Dongjiang, or East River, in Guangdong. All of these new reservoirs served as a tangible and tacit recognition that the retention of the New Territories in some form was integral to the survival of Hong Kong. All of them by their sheer physical presence made a nonsense of any serious discussion to retain Hong Kong Island and the Kowloon peninsula at the expiry of the New Territories lease in 1997.

It is interesting to speculate that had Clementi succeeded in persuading the Foreign and Colonial Offices to press for the outright cession of the New Territories in exchange for the early return of Weihaiwei, the whole issue of “1997” and the New Territories lease may not have arisen. But this is one of history’s more unlikely and improbable “ifs.” Hong Kong and the New Territories would ultimately have gone back to China, but possibly under very different — and perhaps much more amicable — eventual circumstances.

How Hong Kong's thirst for water led to its eventual handover to China.