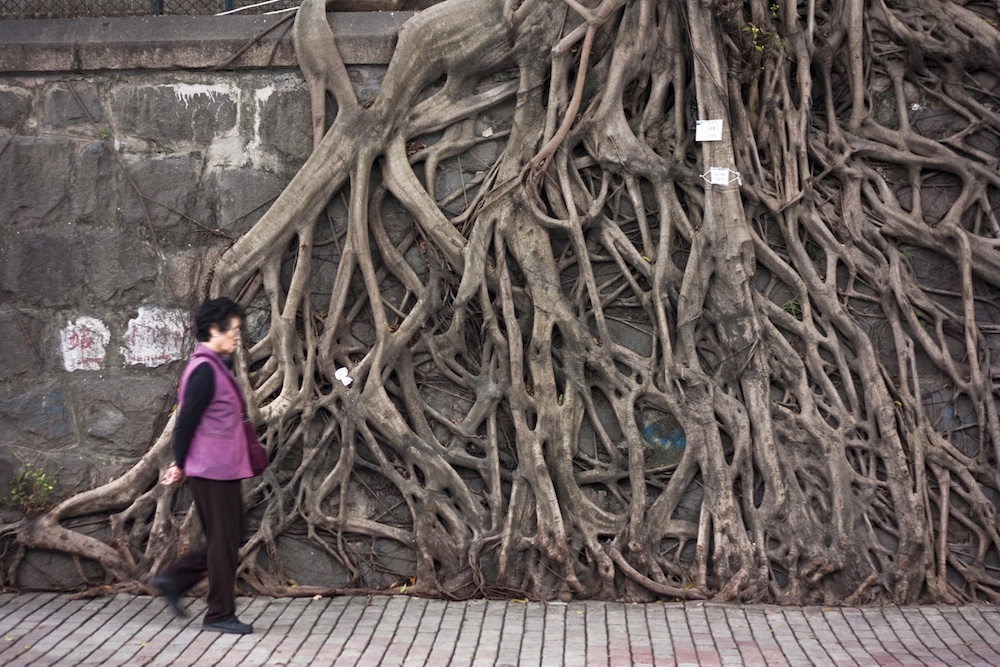 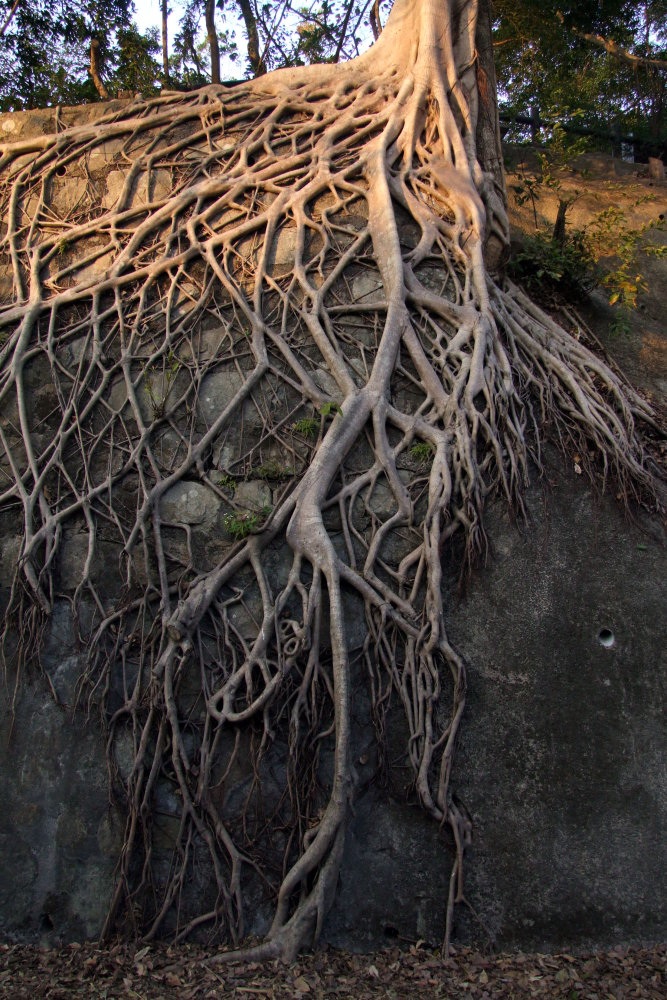 Mr. Lam was a teenager when he installed a shrine to the local earth god under a banyan tree in Tai Hang. “That was about 70 years ago,” he says. After World War II, he received permission from the government to transform the shrine into a temple, which he built nearby, next to a stone wall along Tung Lo Wan Road. The temple still stands today, guarded by Lam’s black mutt, who watches over a motley collection of statues and figurines.

“It started with the earth god, but people brought their own god statues or Buddhas if they had to get rid of them,” says Lam, who is 88 years old. “Now it’s a temple for everything.”

It is no coincidence that Lam’s temple started with a banyan tree. These behemoths are ubiquitous in Hong Kong, growing in parks, street planters and even between the cracks of stone walls. Their imposing presence defines the cityscape. “If Hong Kong was abandoned it would be taken over by banyans in a few hundred years,” says Jim Chi-yung, chair of the University of Hong Kong’s Department of Geography, whose is popularly known as the Tree Professor for his arboreal enthusiasm.

Banyan trees are immediately recognisable for their spindly aerial roots, which cast outwards in search of water and nutrition. When the root finds a suitable source, either in the soil or another tree, it becomes a thick, woody trunk. This is what allows the banyan to grow in varied conditions, which is why they are the most prominent forms of greenery in the hilliest and most densely packed parts of Hong Kong. Jim has counted more than 1,100 trees growing from the sheer surfaces of masonry walls on Hong Kong Island. “They can become 20 metres tall, as big as trees growing out of the ground, except they are growing out from the wall,” he says.

When I first met Jim, in 2009, he took me to Forbes Street in Kennedy Town, where 22 banyans grow out of the surface of a 12-metre-high stone wall, which was built using a traditional Hakka technique that does not require mortar between stone joints. Seeds carried by the wind or dropped by birds find their way into the cracks. As the tree grows, its roots plunge dozens of metres into the soil behind the wall.

Jim loves the way the banyans form a lush green canopy across Forbes Street. He sits on a number of government committees, and he told me he once proposed pedestrianising the street to make it a destination for al fresco dining, a place where people could sit and relax under the shade of the banyans. The government’s reception was frosty. Jim thinks part of the problem is that the government’s doesn’t truly respect or understand trees.

“See what’s happening here?” he asked, touching a root that had been concreted over to stop it from growing. “The people who do this, they don’t understand trees, they don’t conduct research, they don’t believe in science. They’re defacing heritage. Imagine doing this to an ancient monument.” Concreting roots can damage the tree, and every so often, the consequences of this lack of care becomes clear when a giant banyan comes crashing down onto the street below. Last August, after days of heavy rain, a wall tree collapsed onto Bonham Road, which led the Highways Department to surreptitiously chop down four healthy banyans nearby. Their sudden removal was defended by the government as a precautionary measure, but experts like Jim said it was an unnecessary overreaction. It sparked outrage from local residents, who tied balloons, ribbons and messages of support to the trees’ roots, which still clung to the wall that had supported them for 100 years.

While some officials within the Hong Kong government may view them with suspicion, respect for banyans runs deep in southern Chinese culture. Banyan trees are considered to have excellent feng shui, symbolising longevity, fecundity and perseverance. They are also believed to be home to earth gods, the indigenous deities that protect each village, and shrines are often built at their base. In many cases, people worship the trees themselves, not just the earth gods. That is the case in Lam Tsuen, where a pair of banyans known as the Wishing Trees have become a tourist attraction. Visitors write their wish on a piece of yellow paper, tie it to an orange and toss it onto one of the trees’ branches. After the weight of all the wishes caused a branch to collapse in 2005, worshippers were instructed to tie their wishes to a plastic tree instead. Tree Shrine beneath a banyan in Sheung Shui

Anthropologist P.Y.L. Ng notes that banyan trees were worshipped because they were often the only surviving trees in a landscape that had been steadily deforested over hundreds of years. “Its wood is gnarled and so cannot be used as timber, it will not flame and so cannot be used for firewood. Its very lack of useful properties ensures its invincibility and survival,” he wrote in a 1983 study of the New Territories. The Zhuangzi, one of the founding texts of Daoism, holds the banyan up as an example of the ideal of non-utility, as something that becomes sacred because it cannot be used for anything.

This phenomenon doesn’t just occur to other trees: banyans can subsume entire buildings, as is the case with the Kam Tin Tree House. In 1661, the newly-established Qing Dynasty ordered the evacuation of Hong Kong in order to root out rebels loyal to the defeated Ming regime. Villagers were forced away from their homes for eight years. During that time, a banyan tree gradually devoured the study hall of Shui Mei Village, leaving only its outline as a trace. The ghostly structure of study hall’s windows and doors can still be seen in the tree’s roots. Modern Hong Kong has found ways to accommodate banyan trees. To Yuen Street near City University forks around a particularly large banyan, an accommodation also made on Dragon Road near Victoria Park. Nearly two thirds of the 481 trees on the government’s register of Old and Valuable Trees are banyans. According to the government, there are 29,000 banyans under maintenance in city parks and streets, though many more exist undocumented in the wild. A total of 3,491 new banyans have been planted in the city since 2011.

And while the future of many old and prominent banyans is contentious — a number of them have been chopped down in recent years, such as several century-old specimens on Nathan Road in Tsim Sha Tsui — you can count on banyans to find a way to survive even in the most difficult conditions. New sprouts are already growing from the stumps of the severed banyan trees on Bonham Road. There’s a reason they are worshipped, after all.

Thanks to Brian Skerratt for research on Li Yu.

Why are banyan trees so ubiquitous in Hong Kong?