Hong Kong architect Nelson Chow’s favourite Hong Kong object is a traditional Chinese wooden cake mould, with the shape of a fish carved into it by hand. Although simple and functional, it encapsulates the principles of art and craft that underpin the designer’s approach to creating interiors across the city from residences to restaurants, bars and clubs.

Chow found the 40-centimetre-long mould in Yau Mau Tei, renowned as Hong Kong’s kitchen supply district because of its concentration of shops selling wares for restaurants and bars. “I often look at local kitchenware shops for design inspiration,” he says. Having found wonderfully rustic chopping boards at Man Kee Chopping Board, which has been in business on Shanghai Street since 1955, Chow suddenly spotted the shop owner’s collection of wooden cake moulds. “They were so beautiful, and they came in all shapes and sizes,” he says. “One had the outline of a tiny pineapple carved into it and others had traditional flower patterns, but I was immediately drawn to this fish. It seemed more interesting because the wood is older and darker and the fish pattern has such a handcrafted, almost naive quality. It’s very wabi sabi [an imperfect, natural appearance] and feels nice to touch.”

The traditional moulds come in a wide variety of sizes and shapes. The most popular are the classic round ones that are still widely used to make mooncakes thanks to the hand carving’s special qualities for shaping desserts. The festive delicacy and gift, usually made from a dense sweet lotus seed paste inside a pastry shell— although today there are many innovative flavours, low-fat varieties and designs—is eaten during the Mid-Autumn Festival around late September or early October each year.

Most classic mooncake moulds are typically carved from a single wood block and the decorative carvings are of auspicious symbols and have a specific meaning and purpose. Symbolism still plays a significant role in contemporary Chinese culture so a cake with a lotus flower pattern embodies purity and perfection as well as long life, while chrysanthemum flowers represent nobility and elegance. Fast-growing bamboo, a popular motif, is considered a powerful symbol of longevity and vitality. Chow’s larger sized paddle mould with a fish carving symbolizes abundance and prosperity and is used year-round as a mould to create a deep-fried vegetarian dish featuring soft ingredients such as taro. Other similar moulds are used to make Chiu Chow teacakes that are filled with sweetened mashed taro or skinned mung bean purée.

According to the staff at Man Kee Chopping Board, many customers order custom designs and master chefs prefer a wood mould as it gives the pastry a more crisp shape compared to plastic versions, and are easier to manipulate than metal moulds. 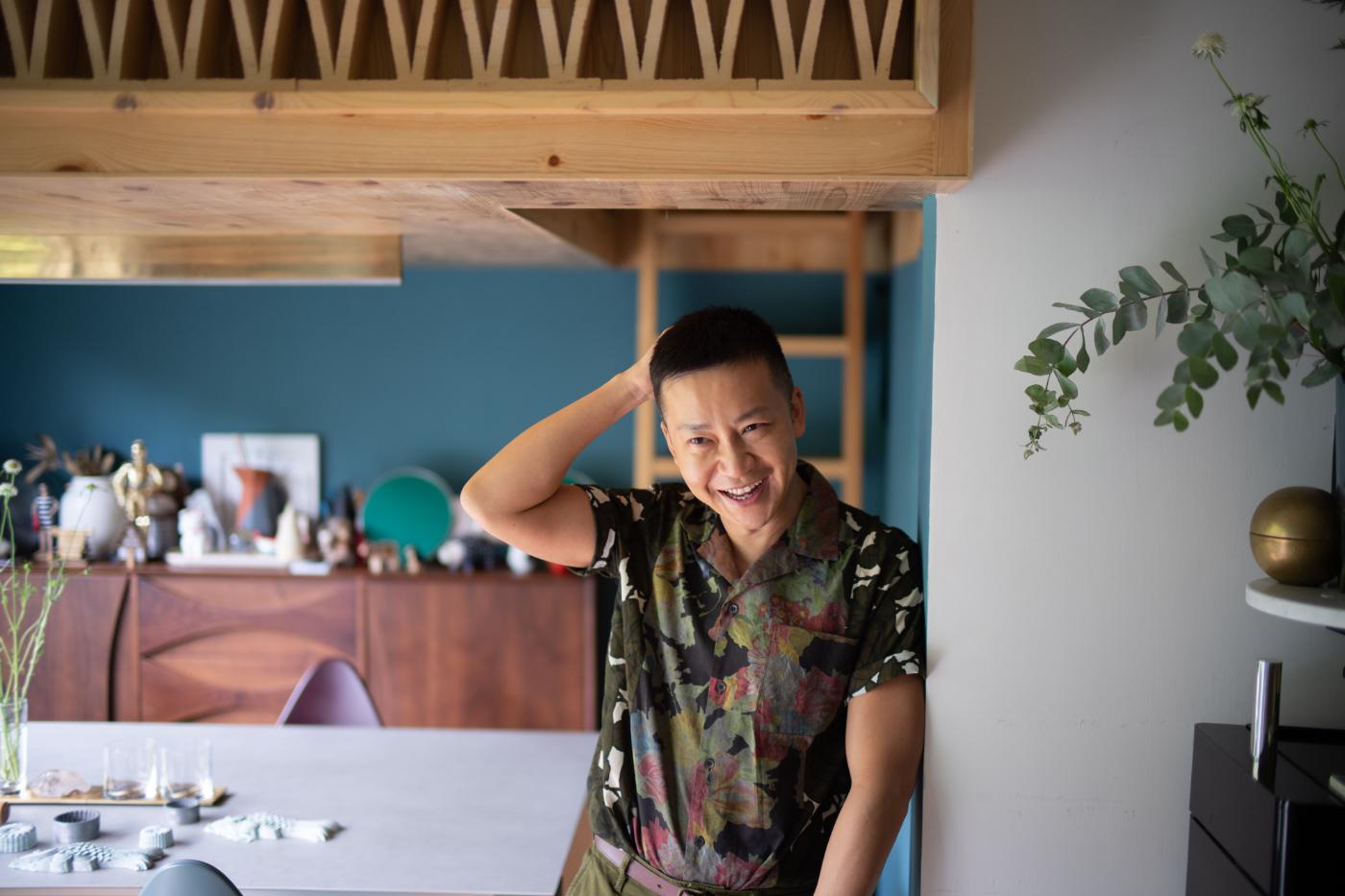 Nelson Chow at home in his treehouse-inspired Homantin apartment Nelson Chow at home in his treehouse-inspired Homantin apartment

Chow, who earned his Master of Architecture in 2004 at the University of Waterloo in Canada before completing a Menswear Tailoring Certificate at the Fashion Institute of Technology in New York City the following year, founded his studio, NC Design and Architecture (NCDA) in Hong Kong in 2011. The eight-person office designs, sources, creates and custom makes many of the inventive furnishings and decorative pieces which Chow believes are key to building original narratives that blend place, climate, culture, lifestyle, local materials and nature to develop a new, place-specific experience.

Intrigued by the creative process, Chow always makes time to explore the arts and crafts scene at home and abroad, seeking out everything from the most humble to the most refined, often coming back to the office with an eclectic collection of inspirational pieces he has found in shops, markets and artisanal workshops. “I love exploring Hong Kong as much as other cities. It’s always inspirational,” he says.

The cake mould has already inspired Chow to create a unique bathroom wall panel in a private residential project in Tai Hang, where the outline of the fish is integrated in a ceramic mix into which he drizzles ink by hand to make a wall that appears to be of watercoloured marble with the fish floating. “We always like to try new ways of creating something unexpected, and that comes from being mindful of how to blend place, history and sensory experience to make people feel comfortable,” he explains. The designer was intrigued by the mould’s rustic, handmade qualities

Chow places a special value on craftsmanship – as in the raw, hand-made quality of the wooden cake mould. In his home neighbourhood of Ho Man Tin, he has transformed his bijou apartment into a tree-house-inspired compact home designed to connect with the surrounding urban forest. The designer eschewed a typical residential layout with separate rooms arranged on a single level, instead of adding an elevated timber bedroom deck which overlooks the open-plan lower level given over to living and dining alongside a galley-style kitchen.

“In Hong Kong we don’t have a lot of space so we have to think very carefully about what we accumulate,” he says. “Materials are important for me because each one provides a unique tactile experience and I like to have things around that I can pick up and touch. Textures add a depth of craftsmanship to the design, which means we appoint more nuanced, emotional spaces. In my home, the natural materials reflect the natural surroundings, but I also enjoy using different materials such as stainless steel or Venetian plaster in other contexts, for instance, to create a futuristic or cave-like feel.”

Over the years, Chow has often commissioned and worked with artists and artisans to evoke a sense of place. In 2019, he engaged a local craftswoman to age a steel sculpture that doubles as a handle on shoji-screen-like sliding doors in a high-rise residential apartment. Its natural, unfinished state formed part of the wabi sabi design concept, where the beauty of imperfection and incompleteness is honoured.

“Sometimes it’s not about the new,” he says. “Sometimes it is the old, such as the cake moulds, that has the greatest impact. It’s about thinking of all the different elements that feel good, from acoustics and lighting and shapes to materials. For me, it’s as much about the experience as the aesthetics. We are storytellers, and creating narratives brings comfort and social connection that go beyond decoration. It’s not about merely adding local products, it is about combining essential elements.” Chow points to one of his latest interior designs as a case in point. Earlier this year he designed a subtly retro-classic setting for a new Cantonese restaurant, Mr. Ming, around a fictional character who collected Chinese coins and vintage cars. The distinctive narrative includes classic tiles and voluptuous custom leather and velveteen furnishings in vintage jewel-like tones inspired by retro car seats and coin wrappers that combine modernity and nostalgia. “People are looking for a unique experience that goes beyond decoration so designers need to think carefully about what the different elements mean and how they will resonate with the audience,” says Chow.

One of the advantages that Hong Kong offers is that it is inexpensive and relatively quick to custom design almost every element of an interior, and Chow argues that local makers should be included wherever possible. This is as pragmatic as it is ideological. Good design means confronting clichés and assumptions and aesthetic values to create an experience that people instinctively recognise, but which is still surprising and exciting.

“It is now more important than ever that we support small local businesses and artists,” says Chow. “And often it is these craftspeople who bring originality, variety and authenticity to a project.”

Why handcrafted objects provide a sense of place and authenticity.