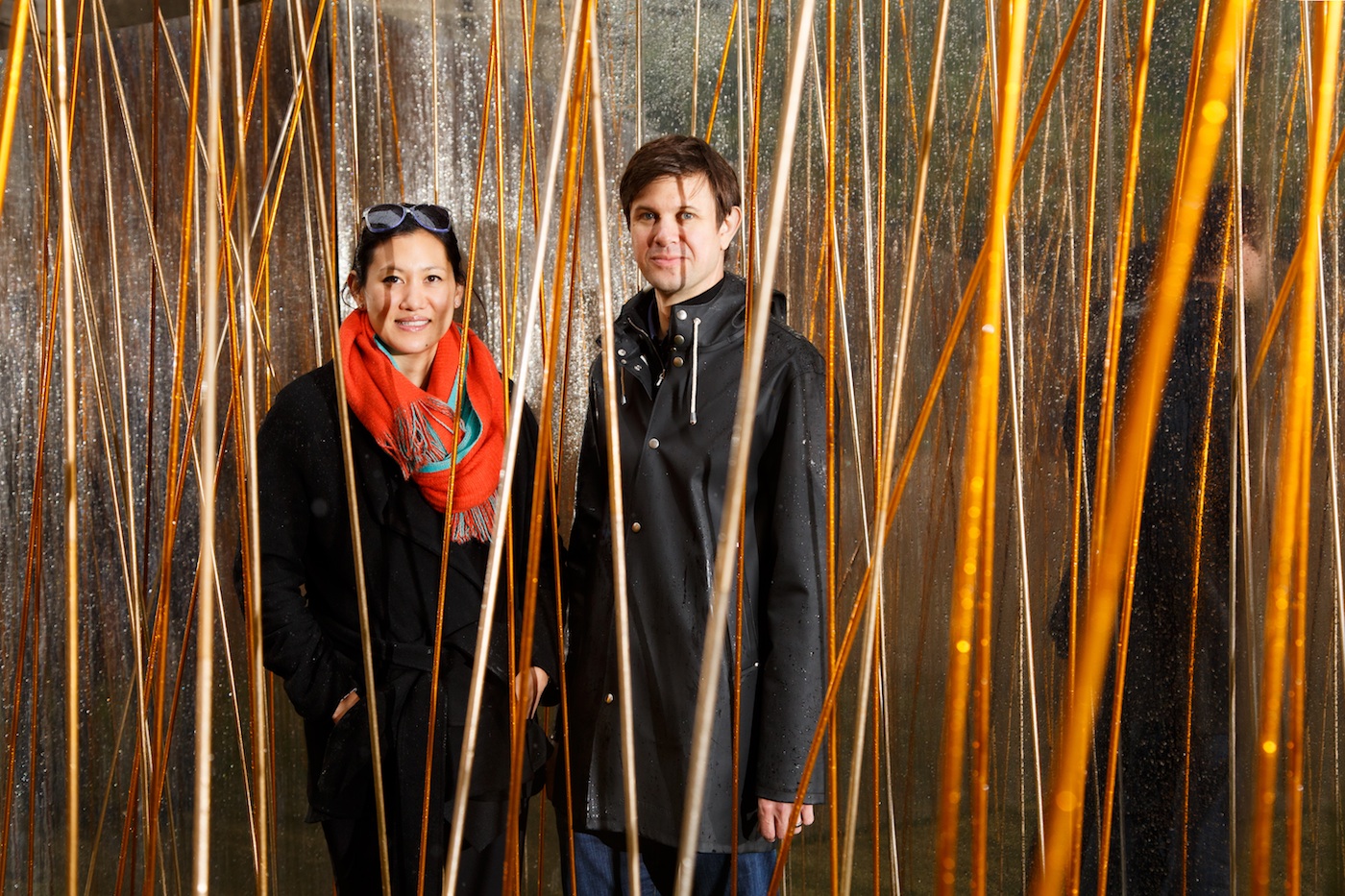 It was a grey day in late 2009 when Marisa Yiu and Eric Schuldenfrei stood underneath a paper canopy designed by Japanese architect Shigeru Ban on the shores of Victoria Harbour. A few weeks earlier, they would have been standing on a scrubby piece of forgotten land in West Kowloon, fenced off from the public ever since it had been reclaimed from the harbour in the late 1980s.

When they were chosen as the curators of the 2009-10 Bi-City Biennale of Urbanism\Architecture, Yiu and Schuldenfrei convinced the government to open the gates. They transformed the vacant lot into a wonderland of architectural marvels: a vintage street market booth marooned in the midst of some shrubs, a mock archaeology dig, a grove of trees dressed up in pink skirts that glowed at night, a tiny raft modelled on a prototypical Hong Kong apartment, complete with pink tiles, bay window and air conditioner.

Many still consider that edition of the biennale to have been the best; Wallpaper magazine praised it as “passionate and thought-provoking.” But it wasn’t easy to pull off. “What appealed to us about the site was the rawness, the idea that there’s this public space with the most optimum views of Hong Kong but also raw nature,” said Yiu at the time. “But we actually had to fight for it. We were originally given the very manicured waterfront promenade, but after walking through this wild bit, we fought pretty hard to get a permit to open it up.” That wasn’t even the half of it. Like many cultural events in Hong Kong, the biennale—now known as UABB—is plagued by funding shortfalls and administrative chaos. Yiu and Schuldenfrei had only a few months to prepare and they even needed to make a last-minute fundraising pitch to cobble together extra money when some of their funding was suddenly cut. They worked every day for months to keep the biennale going, stopping only for a brief moment to get married in an intimate ceremony with a handful of family and friends.

If there was anyone who could have accomplished such a feat, it’s Yiu and Schuldenfrei. The term “power couple” comes to mind. They make a striking pair: tall, gregarious and mysteriously energetic. Since moving to Hong Kong in 2007, they have managed to balance academic careers with their own architectural practice, ESKYIU, along with curatorial projects like the biennale. Now they’ve added twins to the mix. Last year, Yiu gave birth to two boys, Ethan and Marcus. It barely seems to have slowed them down. “It’s a feedback loop,” says Schuldenfrei. Academia, architecture, family: all of these things work together to feed their creative impulses.

Yiu was raised in Hong Kong; Schuldenfrei in Maine. They met in New York in early 2001, when they both attended a show by artist Sophie Calle. Yiu was finishing up graduate school at Princeton; Schuldenfrei was living in New York. “There were many art and architecture openings, lectures and activities – the cultural scene was super active – so there was lots to discuss and share,” says Yiu. She had lived in New York in the mid-90s, when she did her undergraduate degree at Columbia, and she was eager to return. She remembers how energised Schuldenfrei seemed by the city. “I still recall Eric whizzing around New York on his bike and rollerblades all the time.” They founded ESKYIU in 2005 and soon after moved to London, where Schuldenfrei began working on a PhD while teaching at the Architectural Association. When they were both offered teaching positions at the University of Hong Kong, they decided to move their practice to Hong Kong. Yiu had been away for 13 years and was interested in reconnecting with the city; Schuldenfrei thought it would be a good place to explore his interest in the relationship between film and urbanism.

It wasn’t an easy transition. “The biggest differences between running a practice here versus New York is [that] New York would embrace and support a culture of experimentation and positive urban activism,” says Yiu. Hong Kong offered much more resistance. In a sense, though, that is exactly the kind of challenge Yiu and Schuldenfrei needed. They are interested in architecture that goes beyond architecture itself – research and design that tackles big issues like community engagement, urban transformation and environmental sustainability. They are as much about ideas as they are about bricks and mortar. “We integrate art, design, culture and technology to create novel and exciting social experiences that embrace the public realm and empower positive interactions amongst communities,” says Schuldenfrei. The 2009 biennale was not about presenting interesting building projects; it was about exploring public ownership of the city by opening up a space for people to think freely about their built environment. Schuldenfrei says they are particularly interested in “highlighting the role of the individual or the collective to make changes in our city.” For these two, architecture is not just about space, it’s about the people who inhabit them. You can see that in their installations, like the whimsical Bamboo Forest in Wong Chuk Hang, for which they took inspiration from the neighbourhood’s name (which means “yellow bamboo grove”) and installed 320 metal rods on the balcony of Spring Workshop. And you can see it in their latest project: the Des Voeux Road Central Initiative, which aims to banish motor vehicles from Central’s main artery in order to dedicate space to pedestrians and trams. Schuldenfrei is working with a slew of local organisations to push the project forward, including think tanks and green groups like Civic Exchange, but also property developers like Nan Fung Group and the Lan Kwai Fong Group, both of which see the benefit of making Central a less polluted and more human-oriented place to be. “It is important to participate in society, to not just be a constant critic – but to engage by making proposals for the city,” says Schuldenfrei. “The DVRC initiative is just that, an opportunity to examine how to make Hong Kong better as a livable city.” Now that they have Ethan and Marcus in their lives, that mission has become even more clear. “It also makes us reflect on our own childhood experiences, Eric’s youth in Maine and Boston, the endless rolling hills and parks and gardens, and mine in dense Hong Kong and how swimming and tennis and outdoor play was essential,” says Yiu. “It would be exciting one day to create a new playground prototype for open-minded and explorative children — and for the elderly — so a cross- generational play can take place.”

Even with twins, the creative wheels keep turning. Just not as aggressively as before. “For us, it’s been a daily delight with our young twins,” says Yiu. “And yes, for people like us a constant reminder to now free up weekends instead of a seven-day workweek.”

The duo behind Eskyiu are looking at ways to challenge Hong Kong's urbanism.