Artists Are Fighting for Justice in Hong Kong Given how the protests have been such a prevalent part of life in Hong Kong since last summer, it’s no surprise that they are the focus of many of the 33 works shortlisted for the 2020 Human Rights Art Prize, organised by the Hong Kong Justice Centre. The winning work, Magus Yuen Kam-wa’s “Hong Kong Symposium 2019″—the photo that depicts a flower in a gas canister—asks what basic human rights are by exploring the impact of tear gas during the protests.

But the protests are not the only thing considered by the works, which are on display at Goethe Institute until June 6. They also explore a myriad of socio-political issues from poverty and labour rights to migration to eroding freedoms. While Christiana Papadopolous’ “Perpetual Climb” of mini black figures scaling a fancy skyscraper stacked is a critique of modern capitalism, Sharyn Wortman’s “Made for Export” references the years after World War II, when migrant children “exported” their homeland to foreign countries, with biting wit. Made for Export by Sharyn Wortman – Ceramic

It raises the question of what exactly art can do about the problems of the world in which it is created. For KY Wong, an artist and the curator of the 2020 Human Rights Arts Prize exhibition, activism goes hand in hand with art. “My work has always focused on issues like gender equality, LGBT rights and labour rights,” she says.

Although the award’s shortlist is compiled by a judging panel, it is up to Wong to ensure that the works form a coherent narrative within the exhibition. Her curation starts from a place of hope, something hinted at by the title, Year of Gengzi. A gengzi (gang1 zi2 庚子) year occurs once every 60 years and is often associated with unrest and disaster. One only needs to turn to 1840, when the First Opium War was in full swing, or 1900, in the midst of the Boxer Uprising. As bad as it may be, the gengzi year inevitably passes, along with the things that made it terrible.

Using the gengzi year as a framing device, Wong sees the Covid-19 pandemic as an opportunity for the world to rethink its problems. “It’s not just about changing personal habits, but also existing systems,” she says. Social injustice is one “glitch in the computer system” that she wants to fix. “These days, justice appears to exist only for the rich and powerful. Say, you need to go to court, if you are poor, you cannot afford a lawyer, you might not have the right connections to write you a plea letter.” In front of the water cannon: Hong Kong People – Photograph by Kenji Wong

As the pandemic temporarily puts a halt to large-scale street protests, it’s a moment for Hongkongers to reflect on issues like identity, community, and justice – all of which have taken on very different meanings compared to a year ago. In the art world, some are turning a critical eye towards their own institutions. Wong says underpaying and unfair work contracts plague the Hong Kong art industry, something that organisations such as the Hong Kong Artist Union, of which she is a part, aspire to counteract. Set up in 2016, the HKAU provides such services as artist contract reviewing and legal consultation and copyright education. It has 300 members.

This week, Para Site tried to address some of those disparities through the launch of PS Paid Studio Visits, which will give participating Hong Kong artists the chance to host virtual studio tours in exchange for a fee and one month of private health insurance.

There has also been discussion about whether art is even an appropriate medium to respond to these social and political challenges. Wong brings up the example of street art. “The explosion of art in public spaces is talked about in a positive light, but one question I always ask is: is that what residents want?” she says. “In some cases, art could lead to problems such as unwelcome foot traffic and gentrification.”

Year of Gengzi isn’t the only exhibition that has touched on the protests. It has been addressed by a slew of shows over the past nine months, some more explicit in their focus than others: Chow Chun-fai at Gallery Exit, Bicycle Thieves at Para Site, Ching Chin-wai and South Ho’s dual solo exhibitions at Blindspot Gallery, and Ho Sin-tung at Hanart TZ Gallery. Viewing these shows, it’s too easy to slip into an existential torment. In a world afflicted by political unrest, disease and injustice, what exactly can art do about it?

“It’s easy to think, well, what is all this for?” says artist Angela Su, who produced a zine about Hong Kong protest songs and organised a Hong Kong-themed exhibition at New York City’s Chinatown Soup in January. “I try to find projects to work on. Something concrete,” she says. As a wo4 lei5 fei1 (和理非), a term used to describe ‘non-violent’ protesters, Su says she is motivated by guilt. “I’m not a frontline protestor so I’m constantly asking, what more can I do? I definitely don’t think that I’m doing more than any artist.” 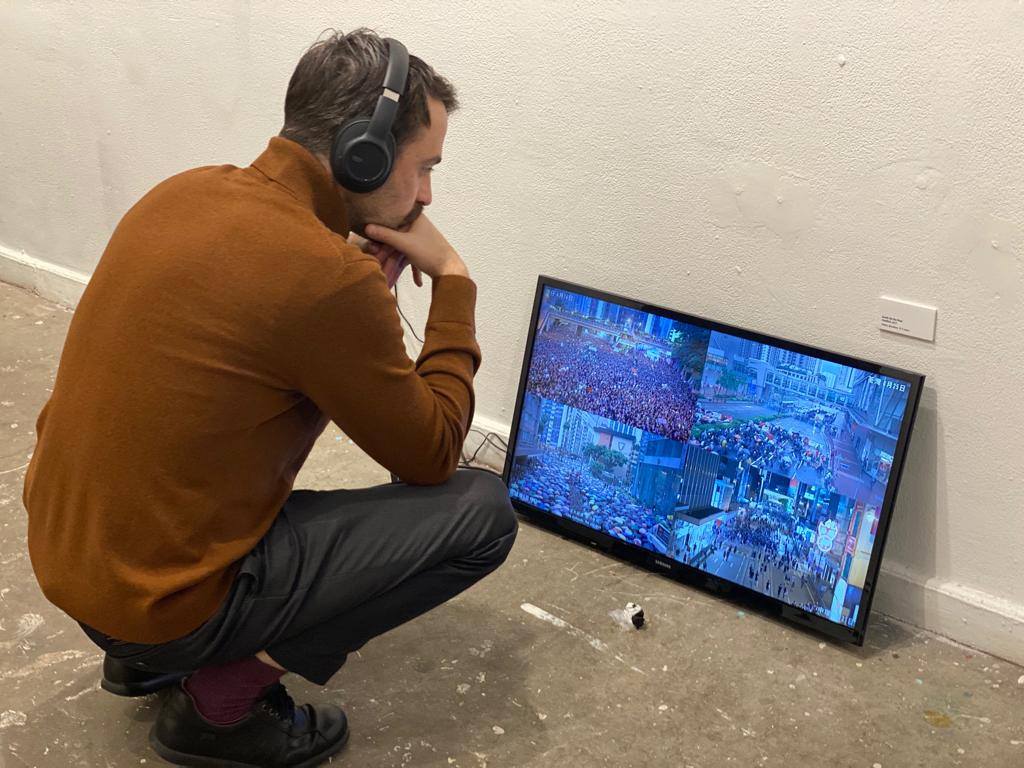 Su’s exhibition was titled afterbefore and it included works by people from various backgrounds, including visual and sound artists, poets and journalists. A majority of the works on display focused on the 2019 protests, but some looked at previous episodes of unrest, including  Hong Kong poet Liu Wai-tong, who penned a ballad dedicated to Queen’s Pier, whose demolition in 2007 triggered an overnight sit-in by 30 protestors who were eventually evicted by the police.

Su remembers meeting a group of activists who thought that the works on display were too mild. “They thought we should have put up photos showing how brutal the Hong Kong police force is,” she says, adding that the exhibition aspired to show the many sides of the protests, of which police brutality is only one part. There were works depicting surreal protest scenes, others that evoked the protestors’ determination and the disappearance of the individual amidst the government’s tightening grip on freedom of expression.

Perhaps that was the point of the exhibition. Images of the police pepper spraying a journalist or pressing their knees onto protestors’ necks would inspire shock or disgust, but for someone who isn’t living in Hong Kong, that feeling might quickly dissipate. To build understanding and empathy, you need to start talking about a place’s history and values.

Kenji Wong is another artist who hopes to achieve that through his work. One of his photos, “In front of the water cannon: Hong Kong people,” is featured in Year of Gengzi. A full time photojournalist for local news outfit Stand News, Wong started documenting the pro-democracy protests last June. His shortlisted work, which depicts a few black-clad protestors sprinting away from a water cannon spraying pepper-laced water dyed blue, was snapped at a protest on Nathan Road in October 2019. “I was with a few of the protestors, marching along, when we saw the water cannon coming for us,” he recalls. “Our instinct was to run, but somehow, after two or three steps, I wanted to see what was happening behind me, so I turned and snapped two or three shots.” The longer Wong documents the protest, the more he is pulled towards their most surreal moments. He posts some of his work on his personal Instagram account, whose number of followers has ballooned from 500 to 10,800 since last June. He sees it as an outlet for his more artistic work; a quick scroll reveals a mix of imagery: a shopping mall protest, a dead bird, a blood-orange fire that appears to be eating up the sky.

“I don’t necessarily post photos that I know will generate the most likes,” he says. “I want to post things that tell a story, at least from my perspective.” Although his photos may seem to veer into art, Wong still abides by the rules of photojournalism. “Everything that I post must have happened in real life,” he says.

For her part, Su says her New York exhibition made her understand the power of the nameless individual in this largely leaderless movement – the nameless individual being herself, or the artists, some of whom flew to New York City to install the show and meet with locals. “If I can make one person understand what’s happening in Hong Kong, and that person tells another person, and so on,” says Su, perhaps her work can inspire a deeper understanding of the city’s situation.

After New York, the exhibition was set to travel to Europe, but then the pandemic hit. “It’s frustrating, but you know, ever since the Umbrella Movement, I’ve always thought fighting for democracy is a long-term battle,” says Su. The fight for justice doesn’t start and end with a street protest or an exhibition; social justice can only be achieved if everyone has a say.


Artists Are Fighting for Justice in Hong Kong

Hope, guilt and a sense of duty: all of these are pushing artists to take a more active role in addressing social and political problems.