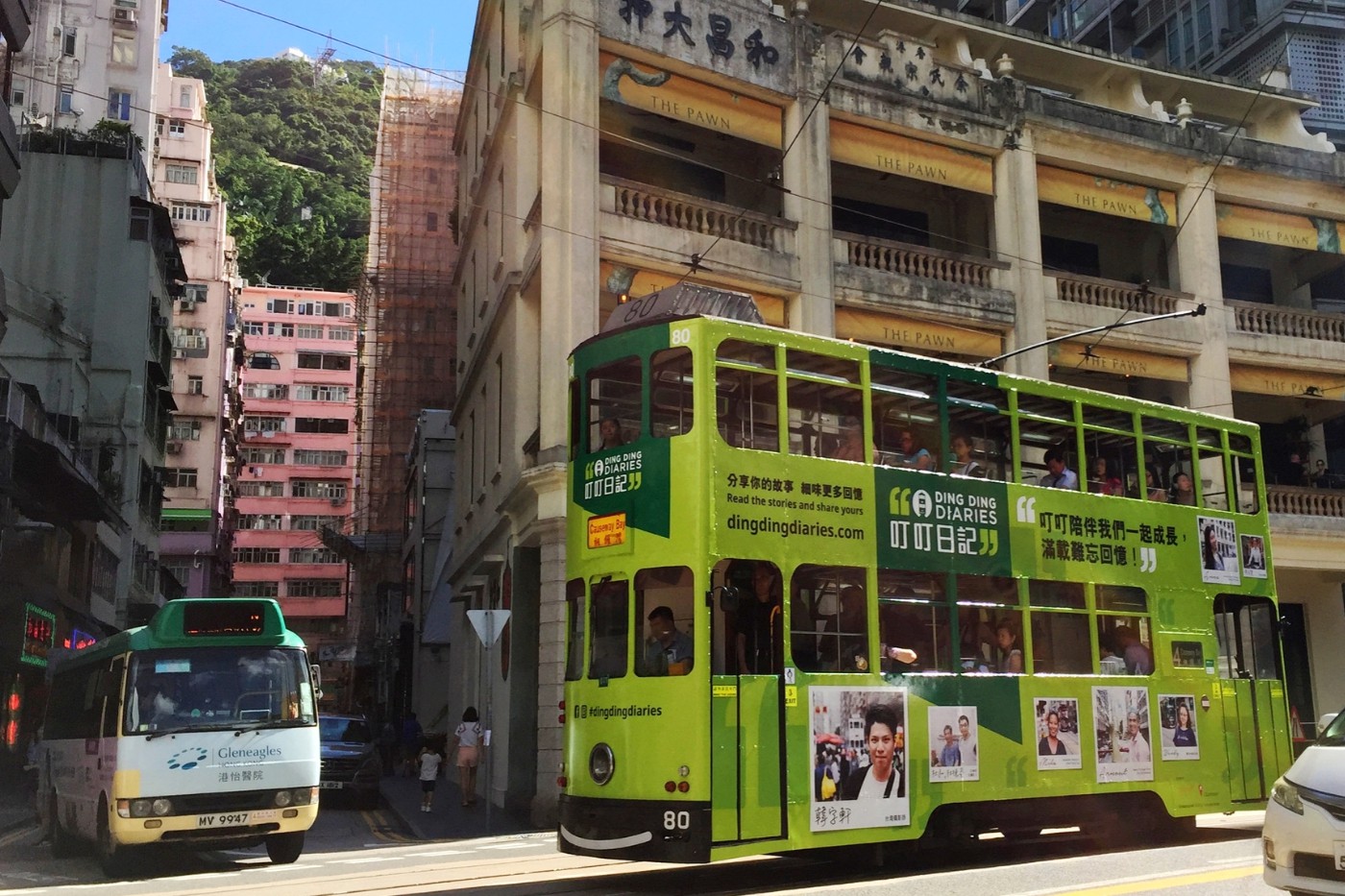 It’s a respite from the frenetic pace of city life, a memento of local history, a space in which to watch the streets unfold. The tram is savoured by myriad passengers for myriad reasons. Zolima CityMag is proud to join forces with Hong Kong Tramways to celebrate the diverse experiences and associations with this treasured form of transport.

Ding Ding Diaries is a platform inviting Hongkongers to share their memories and feelings about the tram. To kick off the project, Zolima CityMag scouted out stories of locals and visitors enjoying a leisurely ride. Enjoy a first selection of them. “As a child I loved running upstairs to admire the view. It’s such a good memory.”

“I grew up in Happy Valley and took trams frequently with my family. As a child I loved running upstairs and leaning my head against the window to admire the view. Of course my parents would ask me to watch out but I have such a good memory of that – the fresh air blowing on my face.

“Eventually my parents also allowed me to go on the tram by myself. It has always been safe. With pretty much one direct route, you could not get lost. I take my children on the tram now as well.

“The tram is great for short distances, but I love to take it to work and when I am tired or stressed sometimes – an hour’s ride is really relaxing. It really is a piece of old Hong Kong. When friends visit, I always tell them it’s a great way to see the sights.” Sang Kee Foods has been an emblem of Sai Ying Pun’s Chiu Chow community of for the past 20 years. “I opened it in the 80s after my family’s famous Chiu Chow restaurant, Tin Fat (天發酒家), closed,” explains Li Chi-sing. “The restaurant used to be down by the Triangle Pier before everyone was moved during land reclamation. As experts of braised geese and cold crab, my staff and I like our culinary traditions. We are old fashioned and the tram is old fashioned, so we like each other.

“I still like to take the tram nowadays and I admire the advances that the system has made. The signage in the past was not always clear, we used to just hop on without being entirely sure of where we were going, but it was funny. Plus, it is the most romantic mode of transport.

“I felt free when taking trams. It gives you time to think and absorb everything.”

“I work in Central as a banker, so I’m at indoors most of the day, in Hong Kong we are always confined to air-conditioned rooms. The first time I took the tram, I remember thinking it was so hot and humid, but in some ways I felt free. It is slow, so it gives you time to think and absorb everything.

“There is something special about the tram, it’s really a good way to get the sounds and sights of Hong Kong. The noises you are exposed to, the smells, the colours on the streets – it’s such a good way to breathe in the city. In Happy Valley especially there isn’t much other choice of public transport, which is another reason to bring my two-year-old daughter on a special ride.” “We’ve grown together and have become an important part of the neighbourhood.”

Following in his father and grandfather’s footsteps, Kan Hong-wing, in his 60s, is one of the last cheongsam tailors of Hong Kong who still does everything by hand. Mei Wah Fashion has been opened in Sheung Wan since the last century.

“Our business has been in the Western District neighbourhood for 80 years,” he says. “I started learning the craft when I was 11 years old and remember taking the tram as a child. Trams are such an important part of the neighbourhood, there is a sense of history. We’ve been here for so many years and the tram has been here for so many years, we have grown old together.

“I still like to take the tram when I am not in a rush. There is a feeling of freedom on the tram, there is fresh air and you are not cramped like in other modes of public transport. One thing is for sure, as old traditions in the neighbourhood go, the tram is a part of history that I hope will stay forever.”

“Inside this peaceful oasis, you have more time to reflect.”

Wong points out the No. 120 tram with excitement when it passes by. “That is the only one of its kind circulating in Hong Kong!” he exclaims.

“Coming from the New Territories, I definitely think that the tram is one of the unique features of Hong Kong Island. I remember walking around Wan Chai and hopping on the tram when I was younger. I think the image of the tram has changed with time as well, before perhaps it was simply a form of public transport, whereas now it has become something different.

“When you enter a tram it is like entering a different world. The world outside the tram runs at a different speed from the internal world. You can kind of sit back and watch the speed of people rushing for traffic lights, horns beeping, and yet inside this peaceful oasis, you have more time to reflect. Sitting still is conducive to thinking and people get on the tram knowing that it will stop at every single shelter, that the driver cannot run a red light. So you’re not so focused on time. When we slow down, there is finally space for our thoughts.” “I know Hong Kong and trams from my grandparents and movies. Coming back now is like coming a full circle.”

“This is is my first time in Hong Kong. I now live in Seattle. My family emigrated from Hong Kong to the US to give me the opportunities they thought they could never have here. I was raised by my grandparents, so the Cantonese dialect is highly sentimental for me. To hear it spoken everywhere is so special.

“In the United States, I have been conducting research on Chinese immigrant labour rights in the past and how the restaurant business was often the only source of work. It was about fulfilling the American Dream, so coming back now to Hong Kong is like coming a full circle.

“I walk around this neighbourhood with nostalgia for the life I could have had, the small alleys, and the small shops and of course the tram. It is so iconic.

“Growing up, I saw the tram in Hong Kong movies, it was always so picturesque. My relatives probably saw the tram as innovative at the time and now I see it as historic, but we both look at it with the same sense of awe.”

Visit the Ding Ding Diaries website to read more stories, and submit your own story for a chance to be featured on a tram.

Hong Kong's oldest form of transport may not be its fastest, but its daily commuters value it for something else.