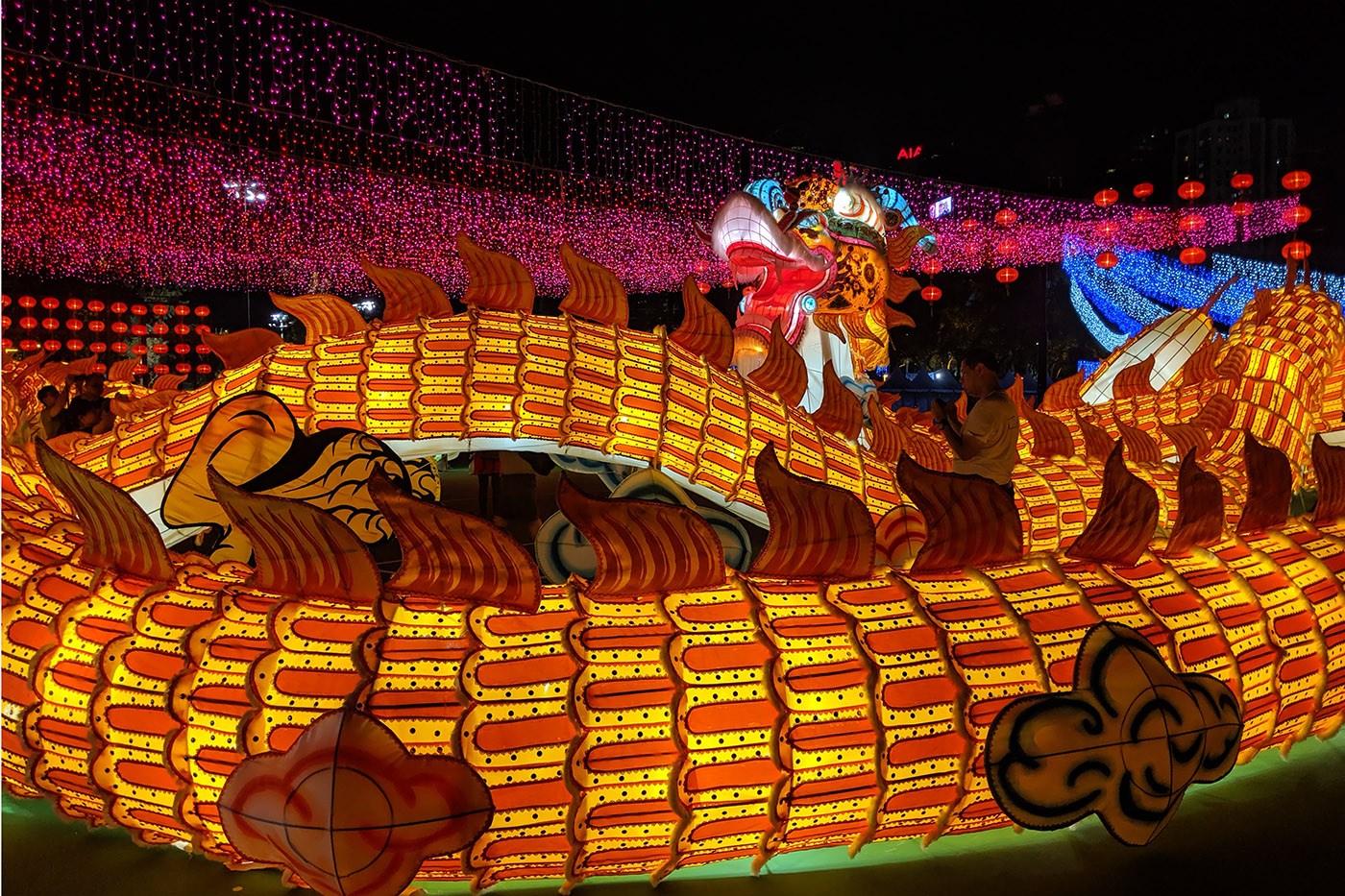 The morning light refracts through a kaleidoscope of taut inflated plastic, striking rainbows from the lanterns hanging in the frontage of a Chai Wan toy shop. Here a plump airplane; there the insipid smiling gaze of Little Twin Stars. Soon these lanterns will be taken down and delivered into the eager hands of children, ready to celebrate on the eve of Mid-Autumn Festival.

These lanterns are the latest iteration in a long tradition which has wandered far from its craft roots. “Lanterns in Hong Kong are not often hand-made from bamboo anymore,” explains lion-making master Hui Ka-hung. “They’re often inflatable cartoon characters, more like plastic toys. Very different from the hand made lanterns of the past.” Bare chested and sweating from exertion, Master Hui’s team at Hung C Lau workshop is hard at work preparing for Yu Lan Festival. It has been four months since the master delivered his gargantuan dragon, Dai Gum Loong, to the Victorian city of Bendigo and much has changed as a result. An additional 4,000-square-foot workshop in Chai Wan now supports Hung C Lau’s tiny Shau Kei Wan shop, but already the space is being pushed to its limits.

At one end is a giant pair of disembodied feet and the grotesque head of a Demon King (daai6 si6 wong4 大士王) – the goddess Kwun Yum in the form of a giant ghost. A large paper junk navigating the underworld and crewed by monks is moored at another end. Elaborate commissions like these have flooded in and once the Hungry Ghosts have been sated, Hui and his team will set to work on Victoria Park’s annual Mid-Autumn Festival display: a giant coiling lantern dragon.

“It will take approximately a month to complete the lantern dragon, which is directly inspired by images of a coiled Dai Gum Loong,” he says. “The dragon will be studded with lights, three metres high at the highest and coiled within a space of 20 square metres.” Lanterns on a more modest scale have occupied a central place in autumnal festivities for generations. “They used to paint riddles on lanterns and you would bring dates to try and solve them,” recalls Hui. “Obviously that’s old fashioned and nobody would do it now – you’d just take them to a movie or karaoke.”

People still play with lanterns on Mid-Autumn, but the forms of the lanterns themselves have evolved. In the past, the most common lanterns were “six pointed lanterns” (luk6 gok3 dang1 lung4 六角燈籠) and “Star Fruit lanterns” (joeng4 tou4 dang1 lung4 楊桃燈籠), which are hand-made from bamboo. Other traditional lanterns include the ever-popular rabbit lantern (tou3 zai2 dang1 lung4 兔仔燈籠), lotus lanterns (lin4 ngau5 dang1 lung4 蓮藕燈籠) and flower basket lanterns (faa1 laam4 dang1 lung4 花籃燈籠). “People began to find them old fashioned,” says Hui. They were superseded by plastic alternatives, but in recent years there has been a resurgence in the popularity of traditional lanterns. “People are now turned off by plastic,” says Hui. Lanterns also have their place beyond Mid-Autumn Festival. “They can be split into two broad categories,” says qilin maker Ringo Leung. There are lanterns for celebration, known as hei2 si6 (喜事), and for sorrow (baak6 si6 白事). Standing inside a storage facility where a Shanmei association keeps its regalia, the kindly master has laid out the materials and tools necessary for constructing a lantern but first, he offers a lesson. “For celebrations like marriage and the Autumn Moon Festival there are hexagonal and flower lanterns,” he says. “To signal that a son has been born there are tim1 ding1 dang1 (添丁燈). For Chinese New Year there are coi2 dang1 (彩燈).” These jubilant lanterns most often come in vibrant shades of pink and red.

As people enter the world, some must leave it and for this there are white and blue lanterns (maai5 seoi2 dang1 lung4 買水燈籠). “Their use is for sad occasions,” says Leung. “For death, lanterns are very simple in form – spiralling bamboo structures covered in white paper. They’re used around graves and funerals.” Various other solemn occasions call for lanterns, too. “‘God lanterns’ (san4 dang1 神燈) are for deity worship while ‘road lanterns’ (lou6 dang1 路燈), for Hungry Ghost Festival, are raised on bamboo poles to guide ghosts to the various festivities.” Measuring up bamboo and wire with a blueprint of sequential hexagons drafted on calligraphy paper, Master Leung prepares. “We start with a sketch,” he says. “I build it up layer by layer. I think about how big I want my lantern to be, draw the largest shape and then work down from there for all the layers.”

Traditional lanterns take their form from a time when they were lit by candles. “Because lanterns were lit with fire the centre had to be hollow to allow air flow, to stop the lantern being set ablaze and for wax to drip out the bottom,” says Leung. “The lantern is suspended at three points in a way that prevents the string from catching fire. Now we have LED lights and bulbs this isn’t necessary but makers who don’t respect the rules don’t understand the origins of lantern design. Their work may be beautiful but it’s not traditional. We care about preserving tradition.”

Twisting a short length of wire into a spiral, Leung continues. “The candle doesn’t move when fastened with wire like this. It sits at an angle so wax drips off it. Done in this way you can walk around however you like and the candle will stay put.” With the fundamentals covered, Leung turns his attention to construction. “It is very much like assembling bamboo scaffolding—tying things together—it’s just the scale and materials that are different.” Examining a frame that the master has already prepared, its miniature architectural quality is striking.

Leung will construct the lantern’s outer shape with malleable wire. Wire’s advantage is also its weakness. “The problem with wire is that it is soft and doesn’t hold its shape well,” he says. “To get around this, we use bamboo for structural supports.” In days past the entire frame would have been made of bamboo, shaved down with a knife to make it supple, then heated with a flame so it could be bent into voluptuous curves.

Knolled upon the table is a series of ramrod straight wires individually wrapped in paper. Leung produces a coil of naked wire. “Wire from the store is floppy and won’t hold its shape – it is dead,” he says. “I have to straighten it out and make it rigid using a drill.” He stops to offer a word of caution. “This is my trade secret – so be vague.” Subjected to Leung’s treatment, the wire suddenly becomes rigid and easy to work with. “Now this wire is alive. I have given it life.” Taking his straightened wire, Leung begins wrapping it in strips of paper slathered in home-cooked glue. The materials spiral in his hands until they are one. “This wrapped wire used to come ready-made off the shelf because there was a demand but now I just make it myself,” he explains. “We wrap wire in paper for two reasons. First, it slows down rusting, and second, it creates a layer between the wires where they are joined. This makes it easier to construct with as it creates friction and will absorb glue. This helps when you finally wrap the lantern in cloth – the paper is water absorbent and the fabric adheres to it. this means that when it dries the materials will shrink and create a taut fabric skin. This wouldn’t work if you used glue which isn’t water soluble.”

As a final touch, Leung begins applying pink and yellow fabric to the skeletal lantern. “Silk is the best because it shrinks when you spray it with water, making the lantern taut and beautiful, but it’s far too expensive now so I’m using crepe.” Adorning it with tassels and golden flourishes, the lantern is complete. Two weeks later, heat emanates from Victoria Park’s vast green football courts. Hung C Lau’s lantern dragon lies in segments on the pelagic expanse, resembling a writhing sea serpent dipping in and out of verdigris waves. A small gazebo is an island of shade from the unrelenting sun. Hung C Lau’s team, lobster red and dripping with sweat, take shelter beneath it until a truck pulls up and the team runs to unload yet more segments. They set to work with electric tape, securing wires and joining pieces.

Though this dragon resembles its Bendigonian forebear, it is an entirely different beast. “Dai Gum Loong’s intricacies lay with his individual scales – this dragon has a simpler fabric skin but his entire length is a solid endoskeleton of bamboo,” says Hui. “My workshop was barely big enough to build it.”

Twilight falls on the park and, in the gloaming, a crowd waits. As the lights of Causeway Bay and Tin Hau shimmer, the dragon awakens. Delighted onlookers are swathed in the soft roseate glow as they wander in and out of the display, embraced by the rolling curves of the dragon’s luminous, labyrinthine coils. The saurian head is raised to a clear sky and a crisp autumn moon glisters in the firmament like a dragon’s pearl.