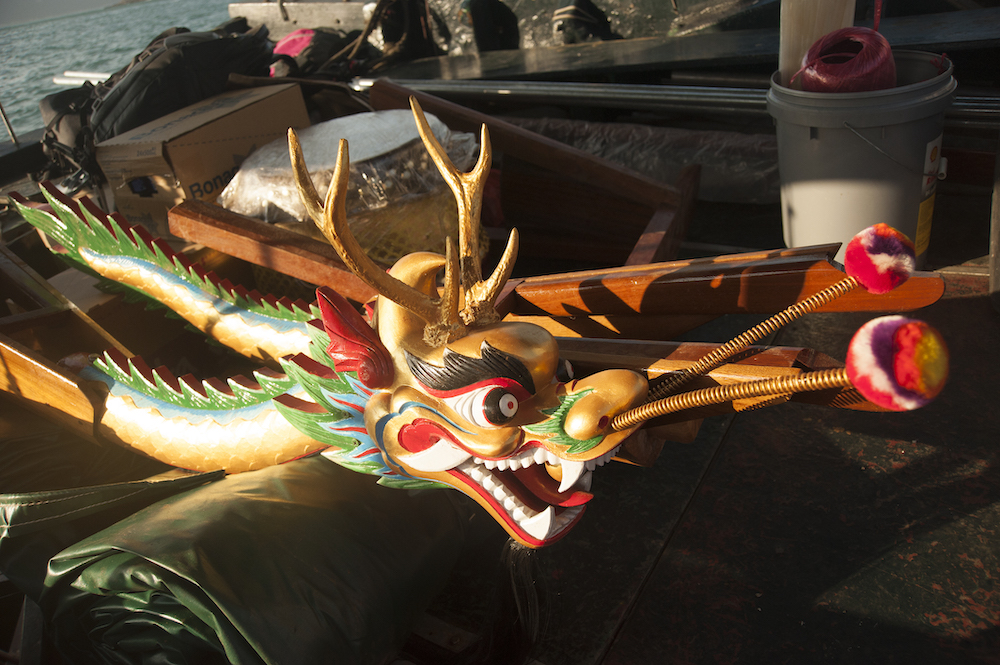 Every year during the fifth lunar month, dragons awaken and fly across the waters of Hong Kong. This is Tuen Ng Festival (dyun1 ng5 zit3 端午節), also known as the Dragon Boat Festival. It is probably one of the oldest Chinese festivals, and after thousands of years, its traditions remain alive, although their meaning has shifted. In today’s Hong Kong, Tuen Ng is most closely associated with dragon boat competitions, while their connection to the original significance of the festival has taken a back seat.

The change can be seen in Aberdeen, where one of the last dragon boat builders, Chan Ki of Sun Hing Shipyard, has quietly transitioned to other boat-making activities. It’s a development that has gone unnoticed by most of the Hong Kong public, but a handful of fishermen and their descendants are fighting against the current to keep their dragon boat culture alive. They are members of the Ap Lei Chau Hop Shing Dragon Boat Club, which is run by 60-year-old Pang Kam-chuen. The club is believed to have been founded around 150 years ago, when some residents of Aberdeen and Ap Lei Chau decided to honour Hung Shing, god of the South China Sea, by commissioning a wooden dragon boat. It was meant to be the designated vehicle for the sea god to patrol and parade through the harbour each Dragon Boat Festival.

Hung Shing had already been honoured by a temple built in 1773, which still stands on the shores of Ap Lei Chau, overlooking Aberdeen Harbour. Hung Shing is seen by the fishermen and seafarers from this part of Hong Kong as their protector, and for generations he has enjoyed unwavering devotion. “Traditionally, each dragon boat should be affiliated with one god, who gives power to the dragon boat and makes it sacred,” explains Pang. “When the dragon boat is not in use, its head, tail and drum need to be kept under the altar inside the temple so the god can have a tight rein on it,” although these days only the head and tail of the club’s largest boat are kept in the hanger of the temple bell and drum. “We are the only club in the area that is still allowed to place the parts of our dragon boat inside the Hung Shing Temple, thanks to our close ties with [the temple] and Hung Shing.”

Pang isn’t particularly religious, but as the descendant of a fishing family, he considers himself a man of tradition. When the club commissioned a new wooden dragon boat, it came with a hefty price tag, but the club’s elders saw it as a worthwhile expense, one that symbolises the club’s continuity. Hung Shing was informed of the news and an auspicious date was chosen to commence construction. Pang and a handful of core members are shouldering the bill. Under Mr. Pang Kam Chuen’s leadership the team heads to the barge for the boat collection The barge in sight near Aberdeen Channel A crucial moment of the handover of the dragon boat Together with new dragon boats ordered by three other associations, Hop Shing’s vessel arrived from a workshop in Panyu, near Guangzhou, in early January. The club had been up late at a fundraising banquet the night before, but that didn’t slow down Pang, who was up before 7am to meet with different people around Ap Lei Chau. As soon as he received notice that the dragon boat had arrived, he boarded his fishing vessel and pointed it towards the Aberdeen Channel. The helmswoman—the wife of one of the club’s core members—navigated through waters crowded with yachts, shipyards and the iconic Jumbo Floating Restaurant, then out through the narrow passage and into open water. A barge appeared on the horizon. Pang pointed at it. “That’s where we need to go pick up our dragon boat,” he said.

Soon enough the four new dragon boats came into view. Each is about 65 feet long. Different crews were all swiftly moving into the positions as if they instinctively knew exactly which dragon boat should go home with them. “Sometimes our intuition is on point,” says Pang. Ropes were tied to the opposite ends of the dragon boats.

A couple of small boats, each with an elder or two aboard, were moored a bit further away from where all the action took place. “Elders around this area love seeing new wooden dragon boats,” said Pang. He explained that the last time the club had commissioned a new dragon boat was “seven or eight years ago.” Each new boat is longer than previous versions—“even if only by one inch”—to represent good fortune and long life. He gestured towards the elders. “Someone needs to be old enough to witness many deliveries,” he said. “It symbolises longevity.” 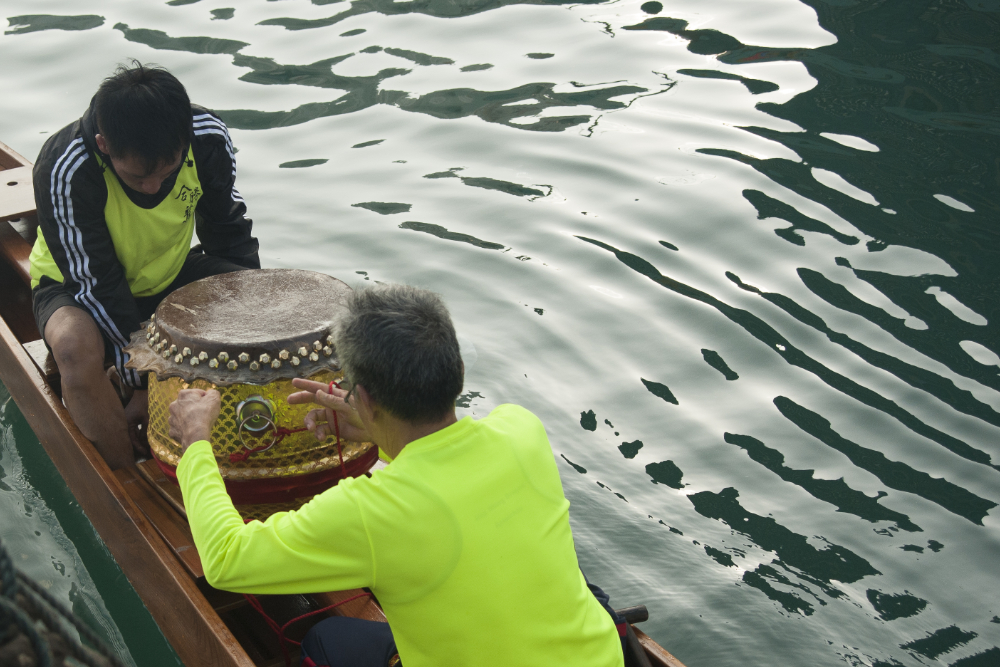 The drum is attached onto the boat As the wind started picking up, it was time for Hop Shing’s new dragon boat to leave the barge and set foot in Hong Kong waters for the first time. It was lifted up by crane as workers maneuvered ropes to ensure it would have a smooth landing in the seawater. Between the wind and the waves, it must have been a tricky job, but they made it look effortless – all thanks to years of being able to read the weather. “We encountered what we call daai6 dung6 fung1 (大東風) – the Strong Easterly Wind,” said Pang. “This kind of weather is a wild card especially in the open sea. It can cause disruptions or even pose a danger to us.”

The wind grew stronger, and when Pang’s boat tried to approach the barge again to collect more crew members, he had to abort due to the increasingly choppy sea. It took a few more attempts before he was successful. The helmswoman suggested it would be wise to return to harbour as soon as possible.

The fishing boat soon reached the calmer water of the Aberdeen West Typhoon Shelter, dragon boat in tow. It stopped at what Pang called a lung4 dan2 (龍躉), a bigger stationary boat kindly lent by some fishermen to serve as a temporary service station for the dragon boat. The dragon boat was given a quick wash and then a drum was secured close to the head of the boat.

On a fishing boat nearby, Pang’s reliable friend and the vice chairman of the boat club, Chan Kwok-wah, was decorating the dragon head with a long strip of red brocade commonly known as coeng4 hung4 (長紅), a symbol of ever-flowing prosperity. It is a well-sought-after auction item at the club’s fundraising banquet, especially among business owners. The traditional wooden dragon boats have separate heads and tails that could come off and move around the joints – one way to reduce force should a collision take place. This newly commissioned dragon boat was no exception. A long strip of red brocade installed onto the boat. The dragon head was set onto the boat and the crew went their separate ways. Paddlers boarded the dragon boat while Chan made a visit to Hung Shing Temple to notify the god of the new boat’s arrival. He then brought nine joss sticks back to the boat to begin a suite of rituals. First on the agenda was to worship Hung Shing. The dragon boat was set near the opposite side of the harbour and its crew rowed it towards the temple three times, as if bowing before the god. To show gratitude to the fishermen for lending their boat as a temporary service station, the same ritual was performed for the boat owner with the aim of bringing them good fortune.

Then came time for the dragon boat to retreat to its so-called “dragon cave,” known as lung4 jyut6 (龍穴), which is now located near Ap Lei Chau Praya Road. Pang says the boats used to rest near the current observation deck next to the Ap Lei Chau Bridge, but they were displaced by MTR construction, and the government relocated the cave to the opposite side of the harbour.

Since only Hop Shing Dragon Boat Club still upholds the rituals related to the arrival of a new dragon boat, by the time the selected paddlers carried the dragon head, tail and drum that were dismantled from the boat to the cave, the other clubs were already moving their boats onto land. A club member helped detach the gill from the dragon head as Pang folded away the red brocade. Eventually it was time for Pang’s dragon boat to be lifted by the crane and temporarily moved into its designated rack.

Everything had gone smoothly, something that is never guaranteed. One of the other dragon boat crews did not have the same fortune as Hop Shing and their dragon boat was chipped as they collected it in the morning. “We believe wooden dragon boats are tokens of spirituality with lives inside,” says Pang. “We treat them like our family members. Seeing them damaged saddens us.” In the temple: the dragon boat artefact is believed to be the vehicle for Hung Shing to patrol and parade the harbour. This means the club takes good care to retire its old boats. In his prayer to Hung Shing, Pang asked the sea god to take away the soul of the old dragon boat. The crew cleansed it one last time with pomelo leaf water, which is believed to ward off bad spirits and provide protection. It is a common scene for fishermen to place a bouquet of pomelo leaves at the front of their fishing boats and wooden dragon boats. Traditionally the boat would then be cremated but now, according to the law, it is cut into half and taken away to decompose in a landfill. Ashes to ashes, dust to dust.

It’s not easy to pick up the baton of tradition and even harder to pass it along. Pang’s commitment to the cultural heritage of dragon boats goes well beyond money and time. But he has no successor, which complicates things. According to tradition, he was not supposed to oversee the collection of the dragon boat because his mother had been cremated only a few days before its arrival. But because there was no one else to take on the responsibility, he had to soldier on and do it himself. As a precaution, he refrained from touching the new boat.

Covid-19 has proven to be another complication. Countless festivals have been cancelled because of the pandemic, including this year’s dragon boat races and parades. Their absence simply underlines how much these traditions mean to Hong Kong. Luckily, there’s next year to look forward to, and the Hop Shing Dragon Boat Club is ready to ward off calamities and shower its neighbourhood with blessings during the Tuen Ng Festival in 2021.

On the eve of Tuen Ng, a dragon boat club considers the spiritual and cultural meaning of these quintessential Hong Kong vessels.