Finding Light in Dark Places: The Photography of Michel Setboun 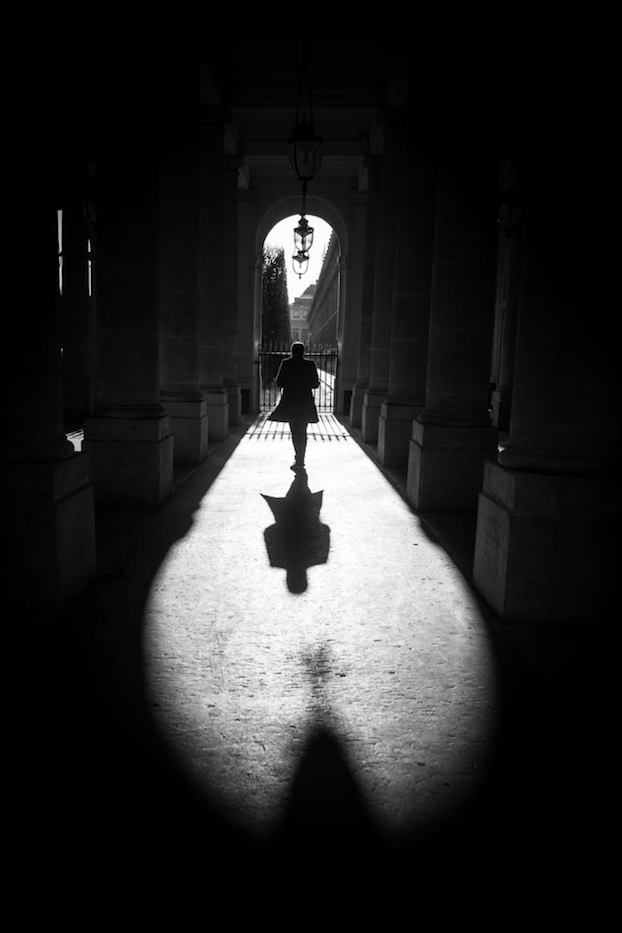 Strange silhouettes glimmer in a gloomy half-light. The gleam of street lamps is refracted from a dank canal, where a solitary figure takes a nighttime stroll, discombobulating shadows stretching out the shapes of strangers in the midday sun. These are scenes of Paris as depicted by photojournalist turned fine art photographer Michel Setboun, whose work is currently on display in Hong Kong. Those perusing the elegantly shot black and white images might draw a connection with the iconic works of local photographer Ho Fan, who shot urban terrains in a complete different time and place, but whose eye for masterful, haunting, and ever so voyeuristic shots shares a similar spirit to that of Setboun. While Setboun’s current works evoke a similar poetic texture, his way into the world of fine art photography is quite different to that of Ho. Setboun once belonged to the swashbuckling world of photojournalism, when he relished the interloper’s life of documenting the news in faraway places, wiring rolls of film back to the Western world – a kind of lifestyle that no longer exists in a globalised world. Nowadays, news outlets and agencies rarely find the resources to invest in strong and enduring photojournalism – it’s not like it was during what Setboun describes as the golden years of his profession, snapping big stories across the Middle East and North Africa while traipsing through sandy, sweat-soaked cities with several unwieldy cameras strung over his shoulders. “I was young, and I had the virus,” he recalls. “People said I was crazy, and I was crazy – you had to be. And it was fun, it was dangerous but it was fun. That adrenaline, I loved it.”

Setboun launched his photojournalism career in his 20s, when he documented Iran’s 1979 Islamic revolution, abandoning the start of a career in architecture to pursue a life on the frontlines of history. “I was restless, and I wanted to make a change, to make a difference,” he says. The office environment was not for him.

The mark of a strong foreign journalist is an uncanny ability to predict where the world’s next big story will unfold. When Setboun arrived, few had anticipated the seismic upheavals that were to take place that would see the country — and region — enter a new era. In his signature black and white, he snapped the rallies and street riots that shook Tehran, and stayed in the restive country to document the onset of the Iran-Iraq war for noted French agency Sipa. He continues to feel a strong connection to Iran, and often visits. He feels proud to know that his snapshots exist as valuable historical artefacts that are used by its people to remember the events that led to the end of the Shah monarchy, among them, campaigns of civil resistance including strikes and demonstrations that paralysed the country and would see a pro-Western, oppressive and corrupt monarchy replaced by an anti-Western authoritarian theocracy. Setboun continues to photograph Iran, but with a new lens – that of the artist, rather than that of the journalist. It’s a different perspective, but one that feels more appropriate to him now that the region’s homegrown photographers have mastered the art of telling their own visual stories, and are empowered to do so. “I’m not sure I could do what I did then, today,” he says. “Before, where we [Western photojournalists] went, there was no journalism, they didn’t have the technology, or the networks we had. We controlled the world of images.”

Sipa was one of the foremost photojournalism agencies in the world, but the onset of the internet saw the agency go into rapid decline. The decline of professional photojournalism has been accelerated by the rise of smartphone technologies that enable anyone to document historical events. Because of these changes, many photographers need to supplement their income with other projects to make viable a career recording history through a camera lens. This is a reality Setboun laments to a degree, though he is not bitter. For him, the end of one life meant the start of a new one. “I have to change when the world changes, that’s how you survive,” he says.

The transition from photojournalism into fine art was gradual, and subject to internal as well as external changes. The frustrations of the fast-paced, fired-up world of foreign news, where everything is about being in the right place at the right time — and having the sharpest elbows in the media scrum — began to wear on him. “You have to follow the event and If you miss it, you are nothing,” he says. “And you have no control over the images. It started to feel like I was in a prison.”

He was also starting to question the beliefs that were central to his wanting to be a photojournalist in the first place. Many journalists work with a desire to shine a light of truth in a world of dishonesty, deceptions and rampant bias. Setboun was no different. But objectivity is an ideal that even the most measured and conscientious journalist struggles to maintain, just as the camera, long heralded as a tool for truth-telling, reflects biases in subtle ways. “We have this idea that photography is the truth, but it’s not,” he says. “Reality is three dimensional, photography is two dimensional. It’s still just an expression of something.” That photos reflect the viewpoints of the photographer, and are also subject the interpretations of the viewer, is a layer of the medium that Setboun sought to explore in a capacity that took him further and further away from photojournalism. The rise of sophisticated digital photography manipulation coincided with his shifting ideas on the nature of truth and photography.

That question of subjectivity is explored in Setboun’s new exhibition in Hong Kong, which shows Paris in black and white, with a curious use of light and shadow that shrouds the romantic city in a brooding aura. The qualities that can make the city feel dreamlike and mythological in a haunting way are made eerie through inventive uses of light. In one especially spooky image, the figure of a girl with water pouring onto her from above gives off an ethereal, bright mist that lights up the darkness of her figure. It looks as though Setboun has snapped a ghost, or an angel. In other photos, a windmill is offset by a gloomy night sky, and gargoyles are pictured close-up with a backdrop that speaks to the anonymous abyss of Paris’ historical and big city skyline.

Setboun’s dark Paris shots belongs to the Dark Light Series, which includes New York — which, through Setboun’s lens, takes on a much more grandiose, Gotham-like aura — and London, where light and history echoes mournfully off its brick architecture and cobbled streets. The works question what we see and how our emotions colour our perceptions of our environments. In write ups of the Paris exhibition, the collection is described of as a love letter to Paris, which it is – though it’s a bittersweet one. Setboun first started playing with the idea of shooting his city at night after a painful break up, or what he describes of as “the end of a love story,” which explains the elegiac gloom and loneliness of his photographs in this series that reflects his increasing desire to explore emotional terrains through snapping the environments he has come to love.

On his brief visit to Hong Kong, a city he shot as a journalist covering the handover in 1997, he appears hopeful and energetic, exploring the city in photos he shows me that celebrate its vivacity and hybridity. These might be a break from his gloomier black and white gloomy Paris works and suggests his mood has lifted as new exciting ventures and ideas start to unfold.

Setboun is particularly excited about playing with colour saturations on his devices, which explore the boundaries between photography and art. It’s a curious venture, one that might veer away from the classically shot photos for which he is best known. By exploring the various functions of Photoshop, marvelling at the way “young people” invent new ways of producing images, he is making a contribution to what he sees as a brave new future for photography.

When we talk, he compares these changes to those experienced by painters after the onset of the camera. At that time, painters were renowned for their technical skill and their ability to reproduce scenes with great detail, but the camera threw that approach into question. Many artists were distraught, foreshadowing the death of their medium. But out of that existential crisis came modern art. Setboun anticipates something similar to happen to the world of photography, and this thought brings him pleasure, rather than regret at the loss of an old, and much loved world. “I think it’s better to use hope than to be scared,” he says.

Paris Dark Light is part of  The French May. It is currently on show at the Gateway Arcade in Harbour City, Tsim Sha Tsui, until May 26, 2017.


Finding Light in Dark Places: The Photography of Michel Setboun