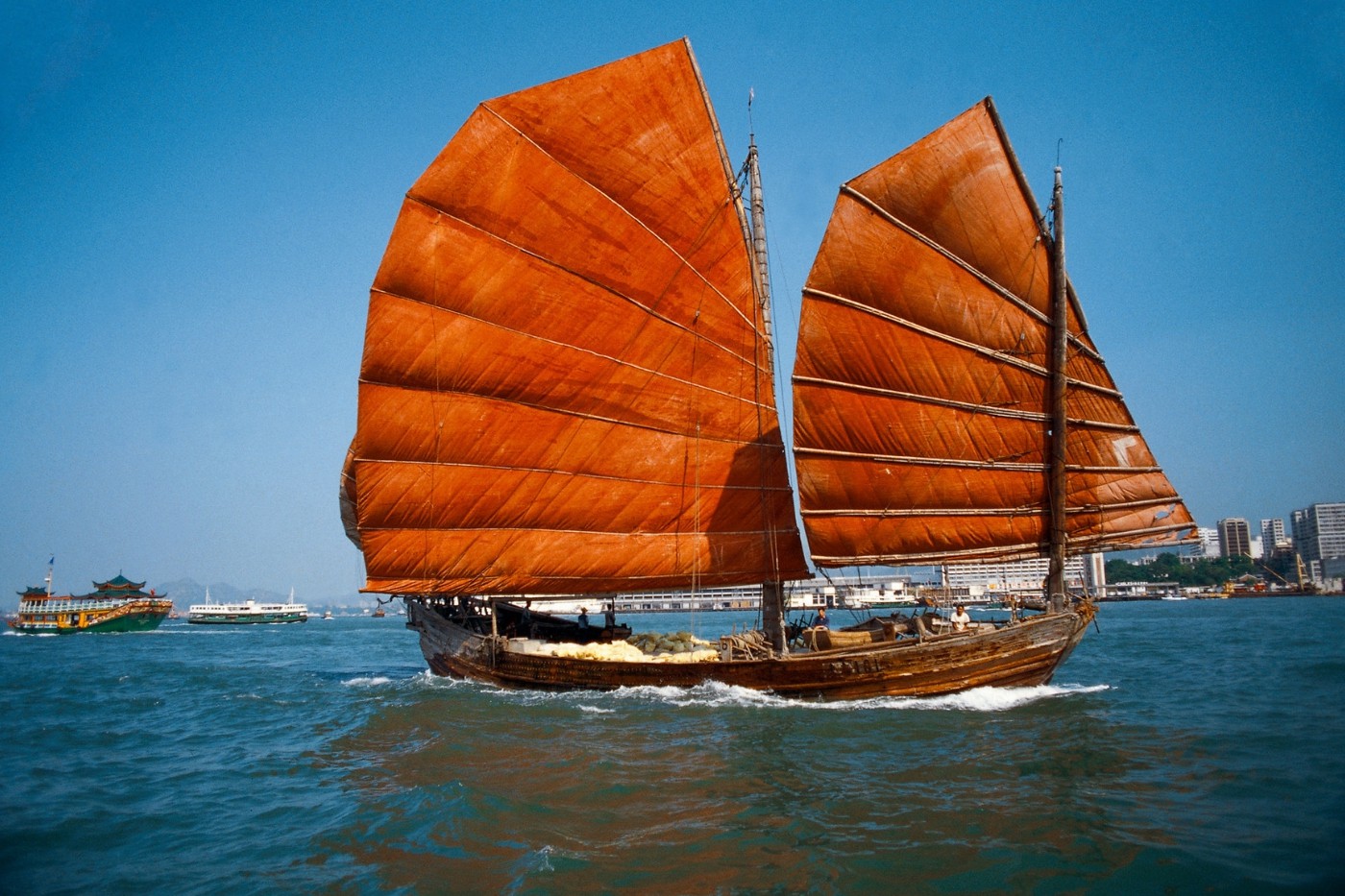 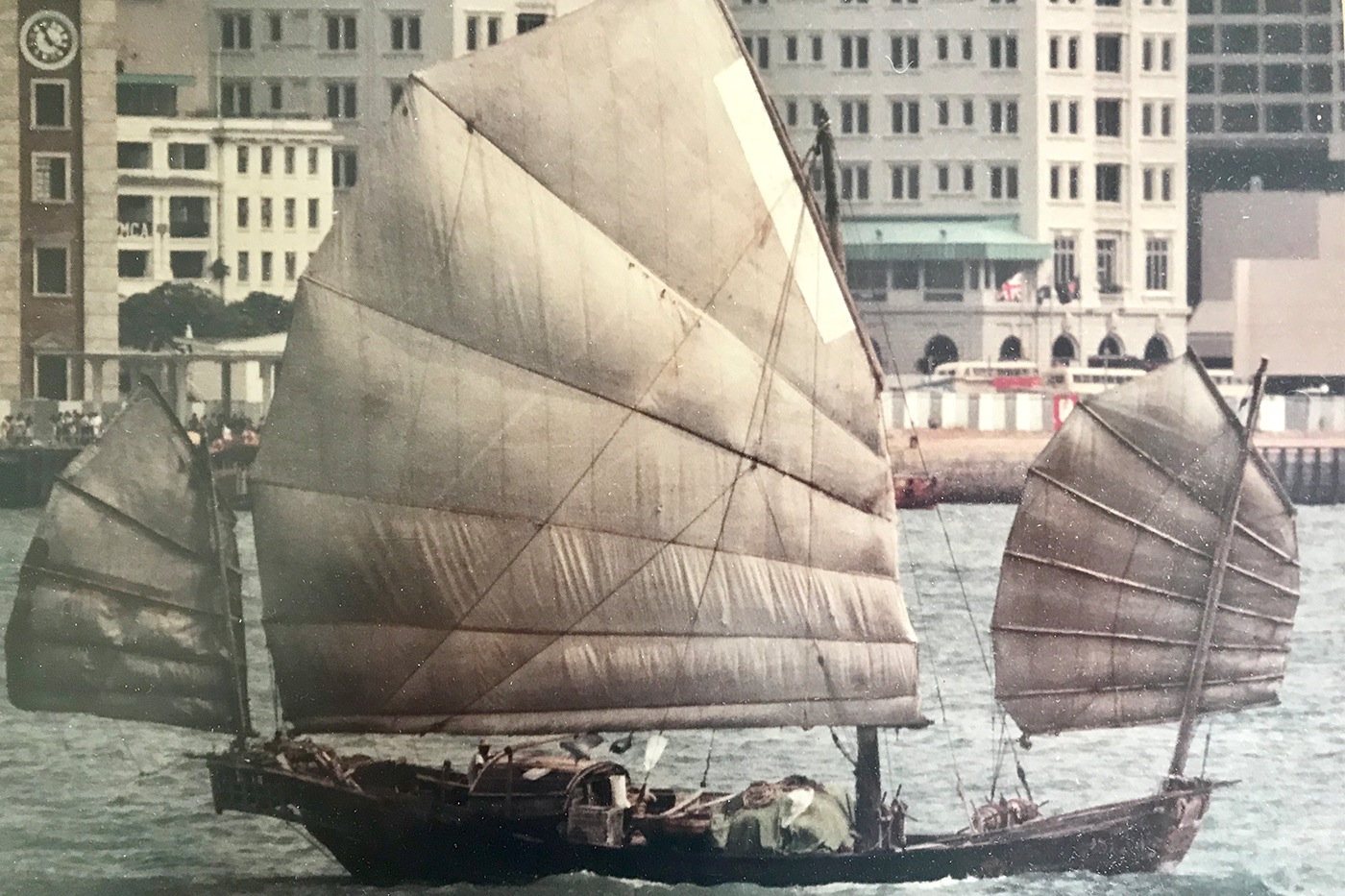 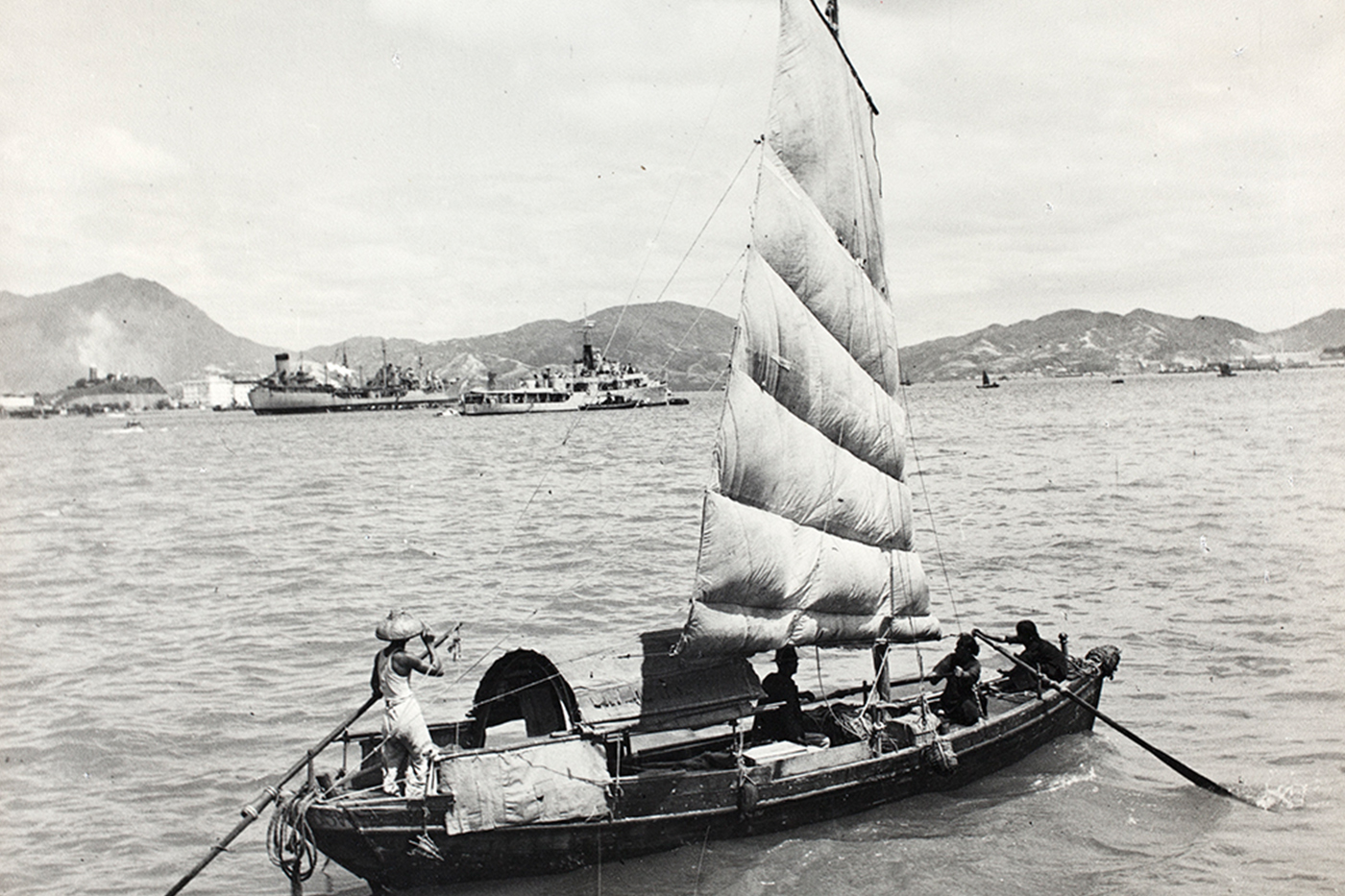 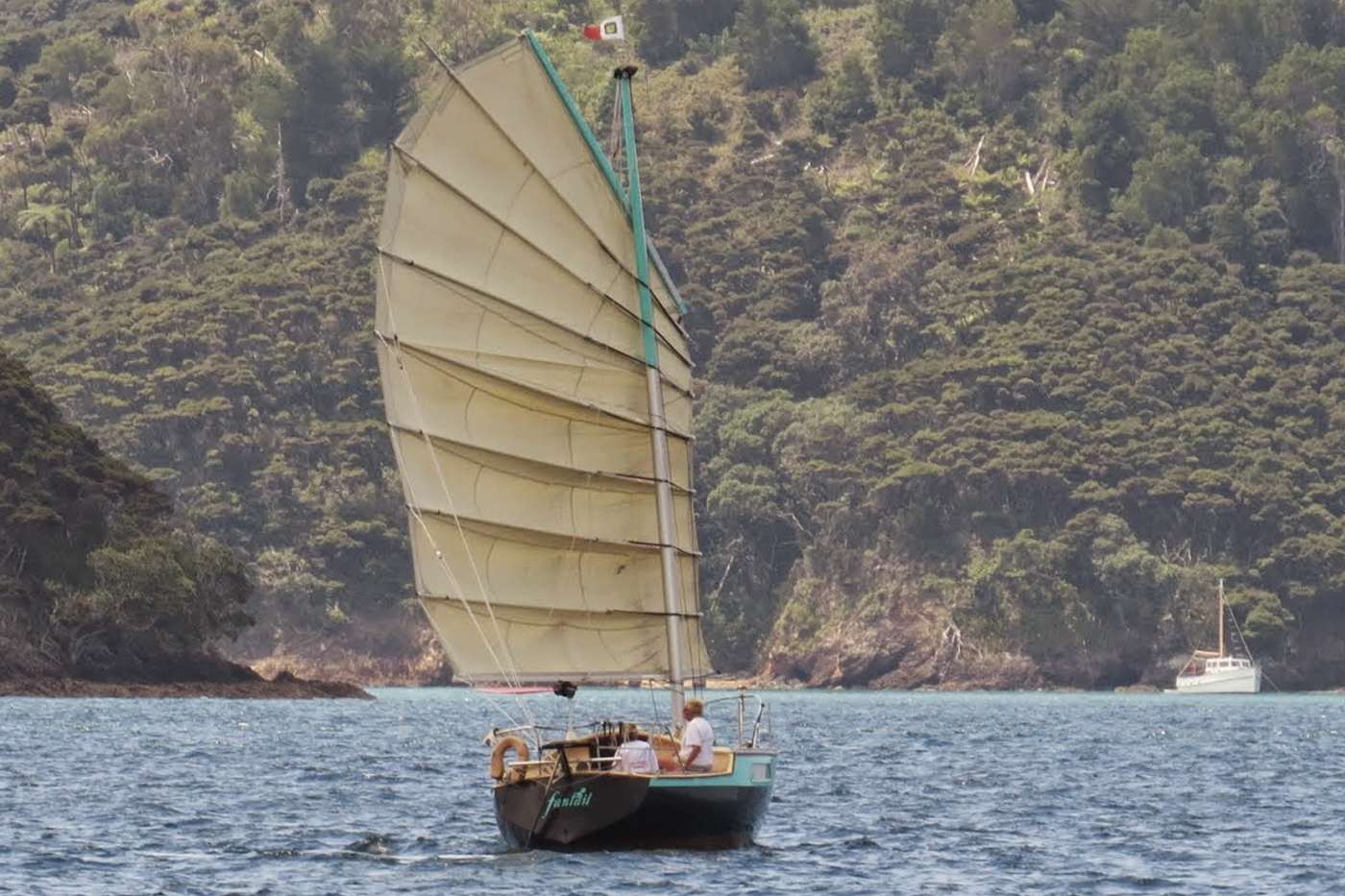 It’s a scene we all recognise: a traditional Chinese junk glides along the water, green hills behind an arcing curtain of vermillion, bamboo-battened sails. We know it from the old colonial flag and the emblems of countless government bodies from the former Royal Hong Kong Police to today’s Tourism Board. We’ve seen it a million times; filmmakers use it when they want the audience to instantly recognise the far-off and fabled Fragrant Harbour.

For people all around the world, the junk boat is Hong Kong, a sort of visual shorthand so instantaneous it doesn’t bear explaining. Yet how many Hongkongers have sailed upon or even seen a real Chinese junk? Not one of the harbour cruises motoring with branded sails just for show, but a real, working model with weatherworn canvas bellying out in the South China Sea breeze?

The sad truth is that the junk, so emblematic of our hometown, has been allowed to flounder in local waters. But the good news is that far from our shores, the Hong Kong junk is alive and well, and could even be staging a historic comeback. “A few visits to Hong Kong in the early ‘80s made me fall in love with junks,” says Susan Bradley, the proud owner of a Hong Kong-built junk based in Monterey Bay, California. “Each time we go out, the feeling on the water feels so unique – better than a regular sailboat. It’s like the boat loves the water.”

On America’s eastern seaboard, fellow “junkie” Donna Dozier remembers the fanfare that accompanied her Hong Kong junk: “She was quite a sight when we sailed her into Annapolis Harbor,” she remembers. “It often got very uncomfortable aboard from the wakes of the many boats circling her, day and night, for a closer look. Even at dock, tourists would often climb aboard at all hours to peer into the large bronze ports – often while we were still in bed.”

From Marco Polo to Benjamin Franklin, Westerners have long been entranced by the Chinese junk. When the three-masted Foochow trader Keying berthed in the River Thames, fresh from a round-the-world journey from Hong Kong via the Cape of Good Hope and New York City, Charles Dickens was also taken in.

“In half a score of minutes,” the Victorian novelist wrote, “the tiles and chimney-pots, backs of squalid houses, frowsy pieces of waste ground, narrow courts and streets, swamps, ditches, masts of ships, gardens of duckweed… whirl away in a flying dream, and nothing is left but China.”

But Dickens wasn’t done there. Like many others at the time, he saw the vessel as a symbol of China’s decline. He called it a “ridiculous abortion” and “floating toyshop.” “Thousands of years have passed away,” he wrote, “since the first Chinese junk was constructed on this model; and the last Chinese junk that was ever launched was none the better for that waste and desert of time.” Here, he at last concluded, was “the doctrine of finality beautifully worked out.”

In the encyclopaedic Things Chinese, junks are declared “clumsy picturesque objects… begun in some antediluvian age and never finished off,” now “bound to disappear in the world’s march of progress.” Esteemed historian and artist Arthur Hacker borrowed the same phrasing when he proclaimed: “The Chinese junk is delightfully picturesque. It is also one of the most badly designed pieces of marine engineering ever to be conceived by man.”

All three are textbook cases of the Orientalist outlook that saw China as a land frozen in time, the object, simultaneously, of both fascination and derision – “picturesque”, as they would say, but with nothing to offer modern man. But they also demonstrate another point about the junk’s critics: they are all “invariably landlubbers,” according to shipping agent and junk chronicler Ivan Donnelly. “They have not studied the junk at sea, in harbour, and at work; nor the sailorman himself and his prowess as a seafarer and navigator.”

Those like Dozier, who have actually helmed a junk, know better. After she suffered a serious auto accident, she was drawn to the junk’s promise of less muscled handling than the Bermuda sloop rig favoured by Western sailors. Whereas reducing sail on the former is a harried, labour-intensive activity that involves paying out the halyard, manually lowering the mainsail, and lashing reef points to the boom by hand — all whilst keeping the boat head-to-wind — on junks all it takes is a flick of the wrist. Once the hoisting line is released, the weight of the junk sail’s bamboo ribs naturally bring down the sail area. As Dozier and her husband grow older, they’ve also come to realise that this also makes junk is a “true geriatric rig.” She heels very little and keeps head to wind in a storm thanks to her high poop deck. In a storm, she says, “her sails fall into the lazy jacks in seconds,” while the junk’s flatter bottom and high poop deck means she heels little and keeps head to wind. In other words, sailing a junk is easy. All you need to do is “drop anchor and go below to a pot of coffee and a good book,” says Dozier.

“Landlubbers” like Dickens and Hacker have a tendency to over-romanticise the boat, to see it as a deliberate expression of civilisational ambitions and superiority. In his seminal text Maritime Archaeology, pioneer of the field Keith Muckelroy sought to address this in his three-part interpretive framework for better understanding ships in their original social context. Part one of the framework: “the ship as a machine.” It might seem obvious, but a ship is an instrument adapted to a function, designed to respond to the precise needs arising from a particular political, economic, or military system. And all old salts agree. From its beginning in the Han Dynasty (260-220) to its technical peak in the treasure fleets of the early Ming (1358-1644), the junk was perfected adapted to the needs of China’s merchants, fisherfolk, pirates and other sailors.

Take its hull, for instance. Westerners said the junk’s relatively flat bottom made it unseaworthy, incapable of resisting the sideways force exerted on the sails and make headway against the wind. In fact the absence of deep keels meant junks could navigate shallow waters and be beached when a typhoon approached, whilst leeboards and retractable stern-mounted rudders — an innovation that would take centuries to reach Europe — reached deep below the hull to help hold the vessel up to the wind. On Cantonese junks these rudders were fenestrated, a flourish long held to be merely ornamental but later found to give more responsive steering control at low speeds, even in reverse.

As early as the Song Dynasty (960-1279), Chinese junks also featured watertight bulkheads that kept them afloat even after being holed and taking on water in one part of the boat. More than half a millennium later, Western shipwrights still hadn’t caught on. Benjamin Franklin urged in 1787 that vessels “be divided into separate apartments, after the Chinese manner.” A decade later, naval architect Sir Samuel Bentham argued for the adoption of “partitions contributing to strength, and securing the ship against foundering, as practiced by the Chinese.”

Then there are the iconic sails themselves. Besides the ease of reefing in heavy weather, they also perform better downwind than most Western varieties. The multiple sheets leading to the bamboo battens along the rounded shoulder of the leech also reduced the tension on the mast, which rarely broke on junks. For uninformed observers, the tattered conditions of many junks’ sails pointed to their inferiority, but this was yet another of her strengths. The struts climbing up the sail meant that tension in the sail area was reduced, so sails could be made from cheaper material and could be conveniently repaired at any port of call, and a junk could find its way home even with holes through half of its sails.

Even for a Hong Kong native and sailing enthusiastic like John Kwong, these were lessons he had to learn for himself out on the water. Once, as he sallied forth from the Royal Hong Kong Yacht Club, he was shocked to find his fibreglass keelboat outpaced by an old wooden junk – a “shabby-looking thing,” he remembers. Another time he was overtaken by a lorcha — a Western-style boat fitted with Chinese lugsails — in the annual Round the Island Race, even as he sailed with a spinnaker. After the race he met the old couple at the helm of that boat, and learnt it was also their home, laden down with all their possessions. “I didn’t dare underestimate Chinese-style boats ever again,” he recalls.

Instead, Kwong devoted himself to studying the junk and soon realised both how rich, and how threatened, Chinese traditions of boatbuilding and seamanship were. At first he decided he would sail around the world in a wooden junk, but changed tack after he found a more effective way to preserve traditional Chinese boatbuilding and bring it into the 21st century. From his boatyard on China’s tropical Hainan island, Kwong is drawing up plans for what he calls “an affordable modern Chinese junk boat”: a recreational craft based on centuries-old designs but made from modern materials, that can be mass-produced for the country’s burgeoning coterie of middle-class sailors.

For the world of junk-sailing, this would signal a sea change. Most “junkies” today have their home ports in Europe, North America or Australasia, and although a few like Donna Dozier and Susan Bradley sail on traditional wooden boats, the majority use East-West hybrids like the lorcha. Junks died out in their home waters because, unlike in the West, China never had a recreational yachting culture to keep sailing traditions alive. Junks were working vessels, designed for ultimate efficiency and ease of handling. This may have perfected their design down the centuries, but it also meant that as diesel engines became cheaper and more widely available, boat operators quickly dowsed their sails and installed outboard motors without sentimentality.

That’s why Kwong is determined to create recreational space for the junk to find a new lease on life. “Some friends tell me, ‘Forget about it, these wooden boats are outdated, junks are outdated, just let them rest.’ But I don’t agree with this,” says Kwong. He points to the Arabian dhow and Frisian skûtsje as traditional craft that have stayed alive through regular races hosted by their home countries, and adds that the international popularity of dragon boating shows us this is possible.

As the last generation of boatbuilders pass away without transmitting their traditional knowledge, Kwong fears that junk culture “could become extinct within a decade.” Time left to save it for the future is wearing thin. “A thousand years ago, Chinese junks proudly sailed the seven seas,” he says. “We absolutely cannot let this tradition die.”

Chinese junk boats are a symbol of Hong Kong, but they are all but extinct in their home waters. What can be done to save them?