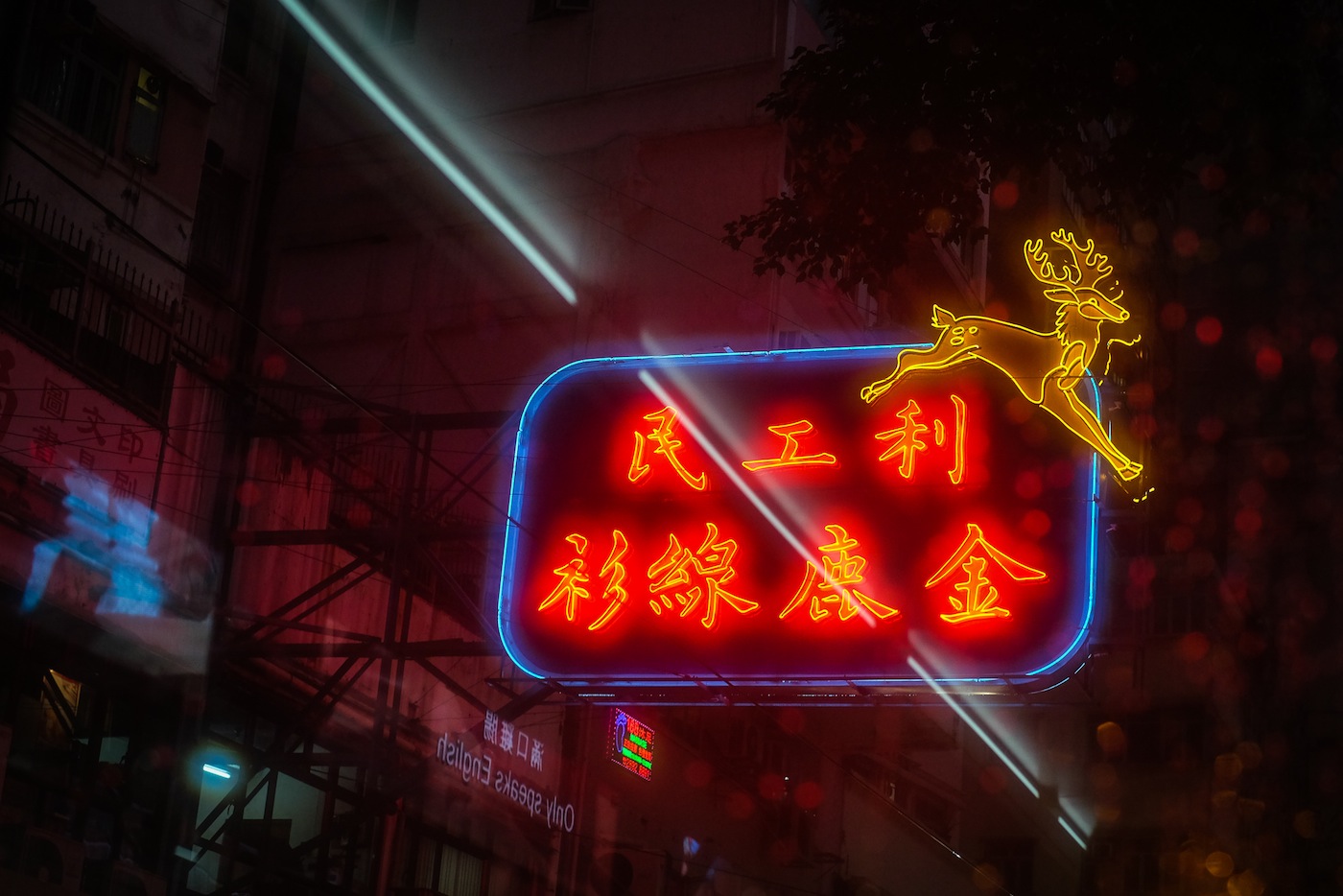 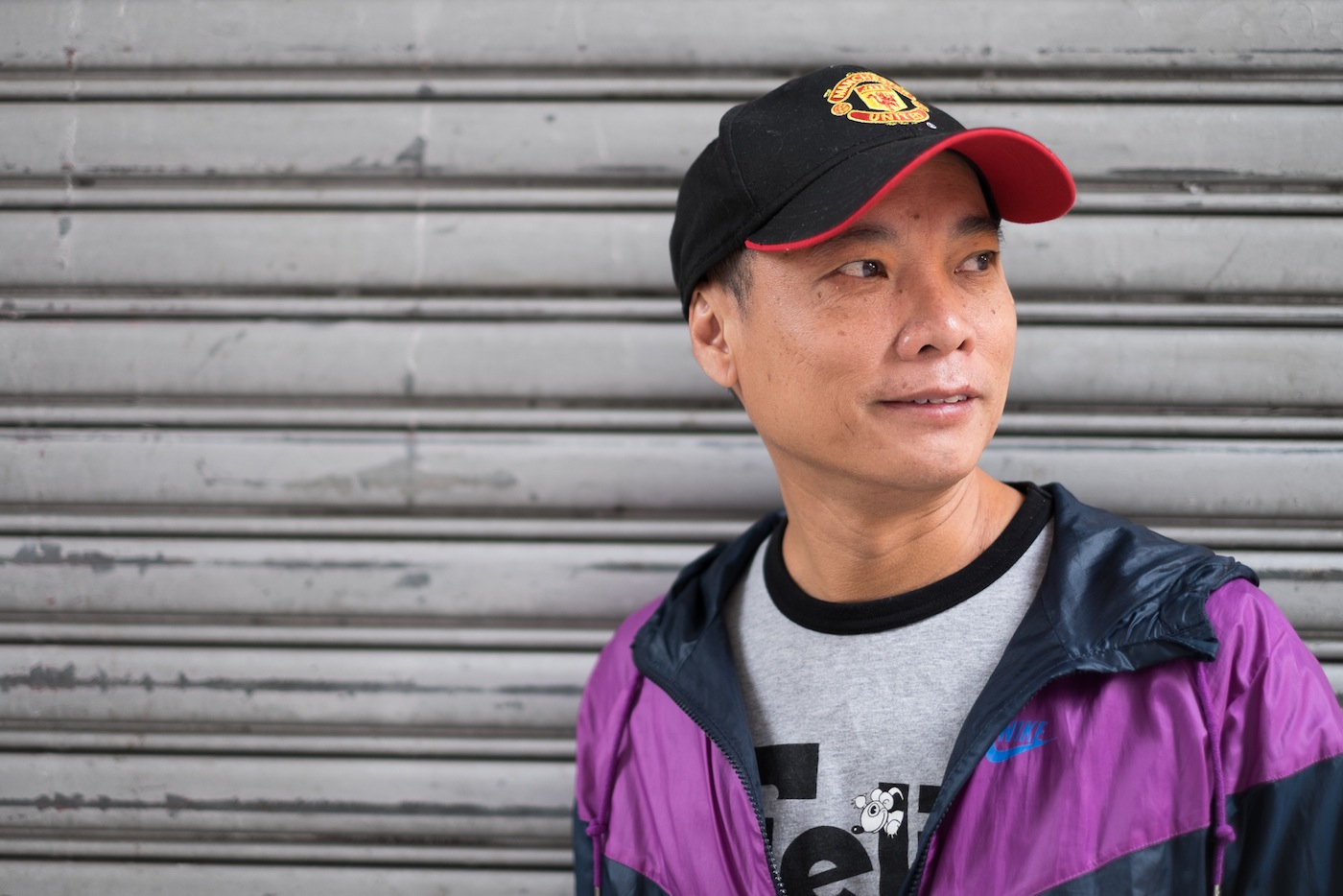 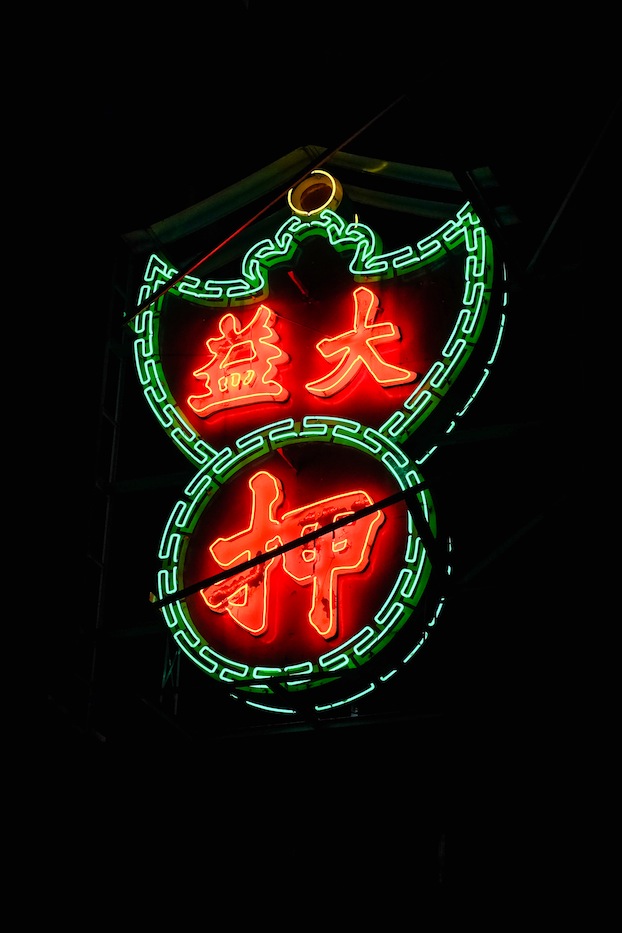 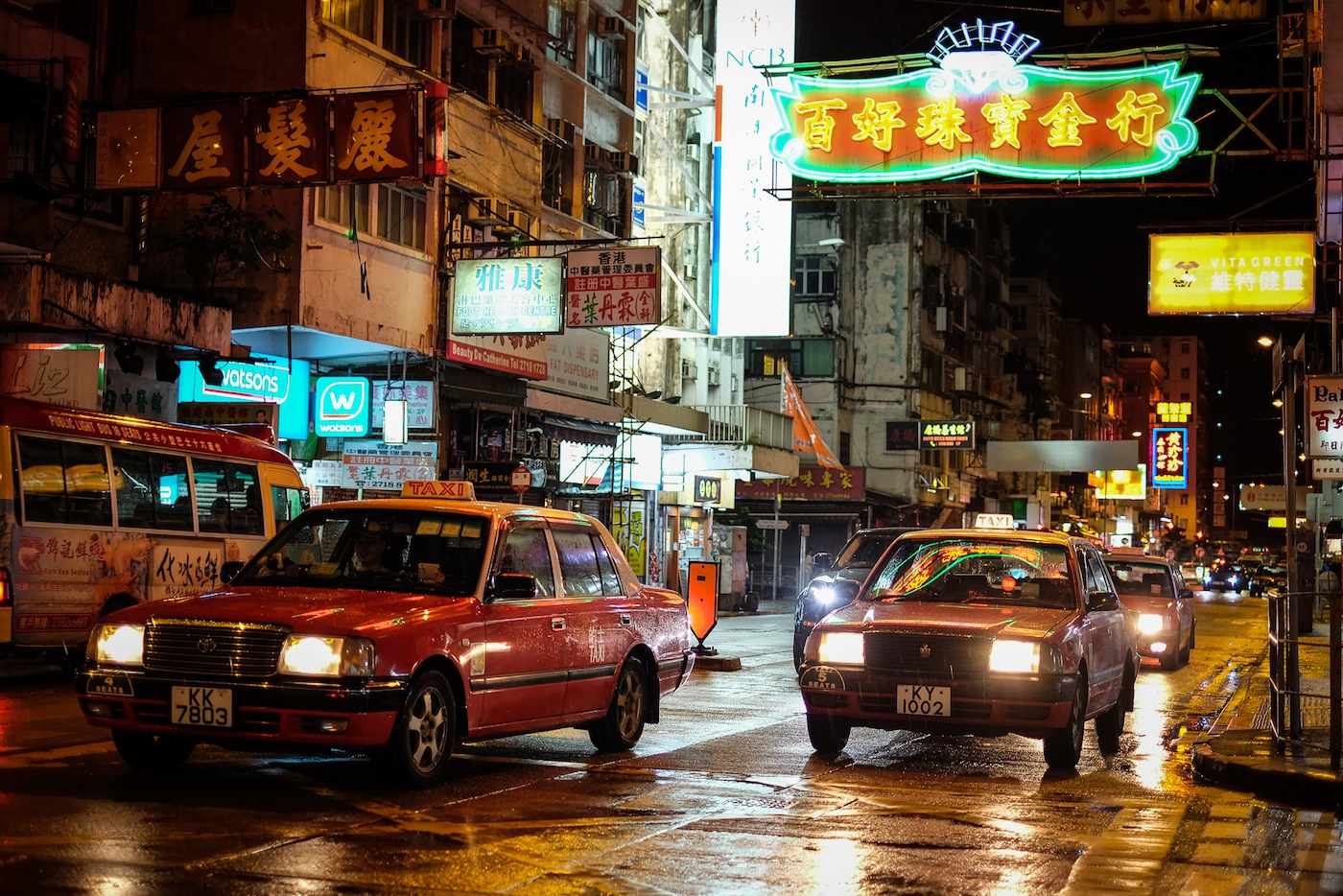 When I meet Andrew Leung one afternoon in Wan Chai, he is walking around the neighbourhood in search of the few remaining neon signs. Like detectives on a mission, we search out the real from the fake, sorting out actual glowing neon from the chaos of sheet metal, plastic, canvas and blinking LED that cling to Wan Chai’s façades.

“There is a great mahjong den [sign] that is still there,” says Leung as he leads us to Spring Garden Lane. Public mahjong dens and the neon signs that advertise them are few and far between these days. Even under the grey afternoon air, you can see how the Golden Dragon Mahjong Parlour draws people in with its mythical sign. The gas-filled neon tubes radiate red on a blue cloud encircled by a golden dragon, welcoming the player into its lair, full of promise and cash. We walk about 200 metres forwards to the Yun Fat Pawn Shop. It could afford to set up two massive neon signs above its corner shop location, one for each street, guaranteeing it would not be overlooked. The pawn shop symbol is instantly recognisable, an image of a bat holding a coin in its mouth, representing good fortune for those who need it most.

“When people think of neon signs in Hong Kong, they usually think immediately of Nathan Road in Kowloon, but every neighbourhood used to be full of neon signs,” says Leung. The 55-year-old is one of the few in the city who still makes neon signs. He is the owner of Tai Fong Neon Light, which was founded by his father in the early 60s. Like most artisanal traditions in Hong Kong, his father learnt the trade from a master (si1 fu2 師傅) before launching his own company. At the time, it was a booming sector, but today, most businesses opt for cheaper alternatives, and the government is busy clearing away the few neon signs that remain.

Neon was discovered as a rare gas in 1898. By the 1910s, it was being used by French sign maker Georges Claude to light signs for opera houses and hair dressers in Paris. The signs grew in popularity as cities grew in wealth. Crossing oceans, neon gave vivid colour and luminance to Times Square in New York and the Las Vegas Strip in the 1930s, before lending its glow to urban Asia, starting with Shanghai and Tokyo. Not one to be left out, Hong Kong was soon putting its own spin on these heat-bowed glass tubes filled with illuminated gas.

One of the city’s oldest neon sign makers, Lau Wan of Nam Wah Neonlight Manufacturing, is now retired, but he recalls that he could barely keep up with orders in the neon heyday of the 1970s and 80s. The city was growing at a rapid rate and businesses were trying to carve out their spot in a dense urban space. Larger-than-life neon signs were suspended over traffic, advertising their brand proudly in the tight streets. Hong Kong’s economic growth was reflected in a night sky filled with glowing Chinese characters.

“They are all tailor-made, so compared to mass-produced signage, the neon sign was much more symbolic of family businesses and small scale operations,” says Leung. With the increasing homogenisation of capitalist culture and the resulting franchises and chains, the distinctive, personalised neon sign began to lose its place.

For a time, even big businesses got into the neon game. “In the early 2000s, we made McDonald’s neon signs – even they used neon at the time,” says Leung. He shows me photos of retro-looking McDonald’s panels with vertical red and yellow stripes above the entrance. “Since then though, the orders have been dwindling. To survive we have to diversify,” he says. Leung no long makes neon signs himself. Instead, he hires one of the city’s few remaining masters to make them, while he concentrates on LEDs and other kinds of signage. “It is the only way to carry on,” he says.

I ask whether neon sign production has shifted to mainland China, like so many of the city’s other artisanal crafts, but Leung surprises me with his answer. “No – even in China you cannot find neon masters anymore,” he says. “During the Cultural Revolution, they got rid of all of them. Then after they opened up, there was a short boom in neon, but it was very quickly replaced by LED. They kind of leapfrogged to LED without ever really establishing neon properly again.”

In a rare case, Hong Kong’s masters seem to be in the unique position of being the only ones who can preserve the know-how of combining classic Chinese calligraphy with the skills of neon tube burning and moulding. Leung learnt the techniques from his father. He says it takes only six months to learn the basics but at least two years to perfect the skills.

Neon is in a strange position. Unlike many local crafts, it hasn’t suffered from high rents or competition from the mainland. Instead, there just isn’t any demand. “You don’t need that much space to have a neon sign workshop and the equipment is not that expensive,” says Leung. “You can still rent a space high up in a building in Mongkok. But you cannot live on two or three orders a year. Most of the surviving few workshops mainly do repairs now.”

The neon landscape that is so intrinsic to Hong Kong’s image is being scrubbed away by the government. It is not a vendetta against the kaleidoscopic signs, but a mission to rid the streets of illegal structures. Unfortunately, most of the metal window boxes, frames and cables that hold up the glowing neon exceed the government’s current size limits. Even those that meet the requirements – and all type of signage alike – are disappearing because it is cheaper to have them removed than to pay for an inspection. Bit by bit, the neon city immortalised in hundreds of films is losing its glow. And yet there is more interest in Hong Kong’s neon than ever. “For local people there was nothing special about neon before, definitely not in terms of cultural appreciation – it was for a much more practical use,” says Leung. But now, “there is new interest in neon from people like you,” he laughs. As novelist Jon McGregor puts it, “you can always tell a cultural form is dying when people start making a point of celebrating it.” That is as true for neon as it is for handmade bamboo steamers, typewriters or vinyl records – all things today’s hipsters like to have in their possessions.

Cinematographer Christopher Doyle, who worked on Wong Kar-wai films such as In the Mood For Love, reinforces this point. “Neon will probably come back, [but] it will take different forms, like Polaroid film,” he says. “It is artisanal and involves so much work, but it will elevate itself by being rare.”

M+ Museum has already jumped on the task by collecting discarded signs and inviting people to document those which are still around. It launched an online exhibition about Hong Kong’s neon in 2014, but it will also display its growing collection of neon signs when its physical home is completed in the West Kowloon Cultural District in 2019.

Back in Wan Chai, Leung and I look up at the green and orange leaf-shaped neon sign of the Ki Chan Tea Company on Johnston Road. Leung repeats himself as if trying to bolster a promise he wants to keep. “I don’t think it will disappear completely,” he says. “It will become more expensive. In five years’ time, no one will know how to make them anymore and then they will become collector’s items.”

Not long ago, Hong Kong was filled with neon. Now only a few masters keep the craft of neon sign making alive.