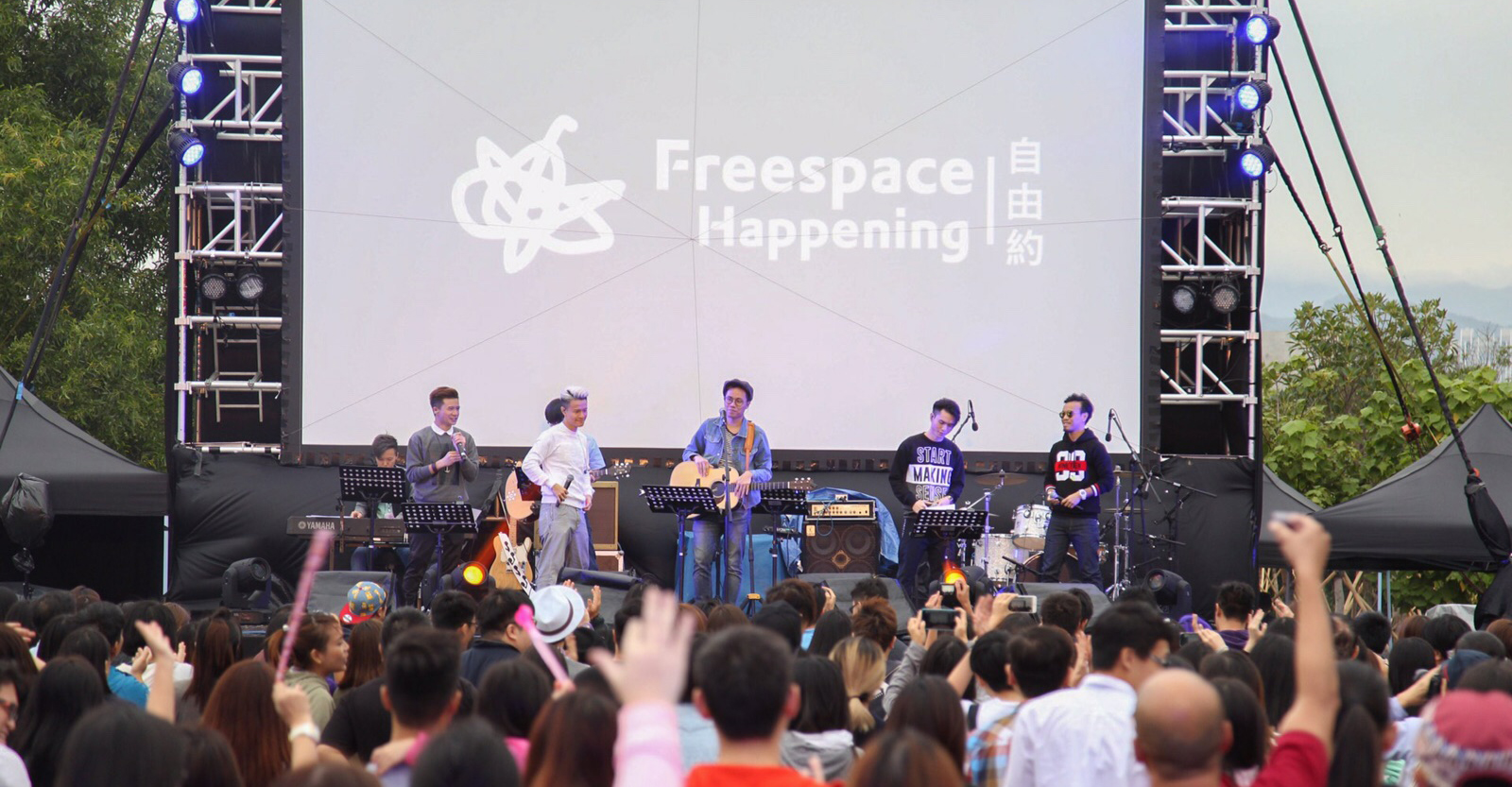 The summer heat has finally broken and a crowd is streaming into the Nursery Park in West Kowloon. This is where trees are being raised for the future West Kowloon Cultural District, but in the meantime, it’s open to the public – and every month, its lawns and waterfront plazas are taken over by Freespace, one of Hong Kong’s most underrated cultural events.

Freespace was launched as an annual festival in 2012. It was a strange beast: part music festival, part arts event, part free-for-all. Groups of friends picnicked on the grass while hawkers sold local produce and handicrafts from blankets arranged along the waterfront promenade. At one point, a dancer tied to an enormous illuminated balloon danced soared over the crowd, landing just long enough to propel herself up again.

At the time, the West Kowloon Cultural District’s director of performance, Louis Yu, described Freespace as a “pressure test” that was designed to see whether Hong Kong could shake off the restrictions that burden its public spaces. “You know how bad our public spaces are,” Yu told me in 2012.

Freespace was conceived as a way to express those goals. Now it has been transformed into a monthly event overseen by Low Kee Hong, a Singaporean theatre practitioner who moved to Hong Kong in January. When I meet him at the Nursery Park, he is dressed in a black kaftan with red and white woven runners; the sides of his head are shaved, but a ponytail pokes out from beneath his black-and-white ballcap. He tells me that Freespace’s experimental ambitions have survived the transition to a monthly schedule.

“Each one will try a different format, different scheduling. What’s important is that people know something is always happening,” he says.

“Over the next two years we will continue to fine tune and work together, which is the most important part because West Kowloon is for the public. It’s not just about buying a ticket and going to the theatre.” The first Freespace Happening, as the monthly events are called, took place in August. “It was blisteringly hot – and 10,000 people came,” says Low. People brought blankets and spend the day lounging under the shade of the Nursery Park’s trees. “Our decision was to be a bit more relaxed with our open space. We really want people to just come and relax. Hong Kong people are hungry for more of these kinds of spaces.”

We are sitting on a picnic bench next to the waterfront. Nearby, teenagers are sprawled out on the lawn, waiting for an up-and-coming Cantopop group, C AllStar, known for its sweet harmonies and socially conscious lyrics. Next to the water, a group of elderly people have set up a karaoke machine; a couple are dancing as one belts out an old-time tune.

West Kowloon recently started licensing buskers who want to perform in the district’s space. Low says it’s a way to make sure things don’t get out of control, like on Sai Yeung Choi Street in Mongkok, where residents have long feuded with the performers to set up during the street’s pedestrian-only hours. Low says the licensing system is meant to be as open as possible: after paying an annual HK$100 fee, buskers are free to perform throughout the park and waterfront promenade. So far, about 100 buskers have been granted a licence.

Low says these kinds of policies will be necessary to manage the West Kowloon park when it opens in a couple of years. Freespace will eventually be transformed into a permanent venue within the park, with daily performances and cultural activities. Local music guru Kung Chi-shing was recently hired to develop Freespace’s musical programming. “This is a long-haul project, let’s be honest about it,” Low says. “So the process is critical.”

So far, people seem happy to simply hang out in a space that isn’t burdened by the rules and restrictions imposed on most of Hong Kong’s parks. Families play games on the grass, next to booths selling craft beer and handcrafted leatherware. Near the water, a group of five friends sit on the grass, waiting for C AllStar to start playing. One of them is strumming a guitar; another starts doing cartwheels across the lawn. They say this is their first time at Freespace.

Nearby, a young woman named Flora Ho has spread a blanket out on the grass and placed a collection of miniature beds on top of it. “They’re for cats and dogs,” she explains. “I made all of them myself. The design, the wood cutting, the sewing. My ideal is to sell them for real. This is a good place to show them off. I know it’s not that practical, but it’s a dream.”

That’s what Freespace is all about: carving out space in a crowded city for people to express themselves, however eccentric their ambitions may be. Low says he idolised Hong Kong when he was growing up as a Cantonese speaker in Singapore – it seemed like such a cultural beacon, a place where people could dream big and make it. When he finally moved here, he was surprised to find it had lost a lot of the cultural confidence it once had.

“Dreaming big is not as common [anymore],” he says. “That’s something we have to watch. I’ve always looked up to Hong Kong because historically, culturally, the people – it’s always been ready for big things. And we have to recapture that.”

More to read about Frespace 2016

A monthly festival is laying the groundwork for the West Kowloon Cultural District.