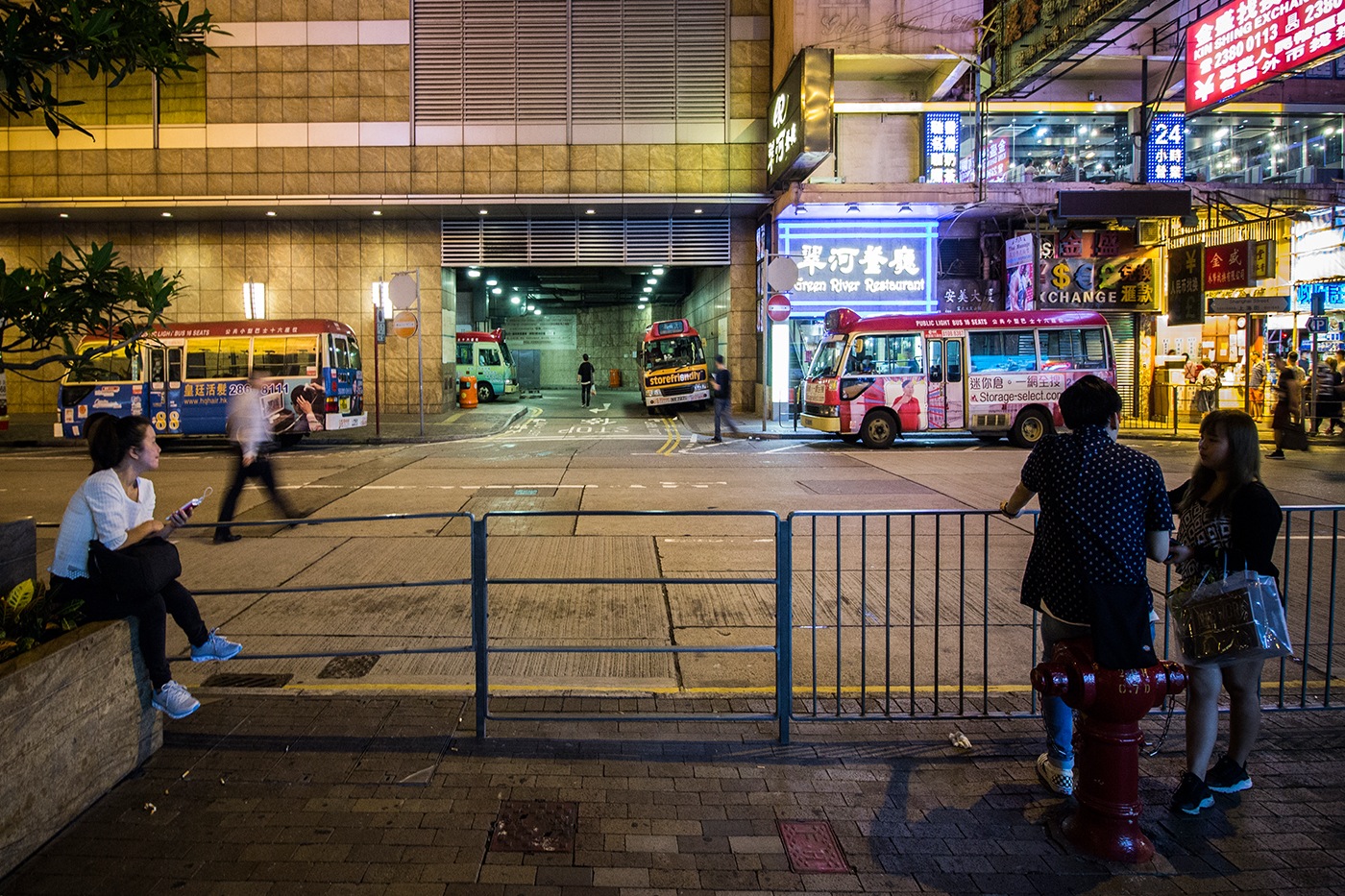 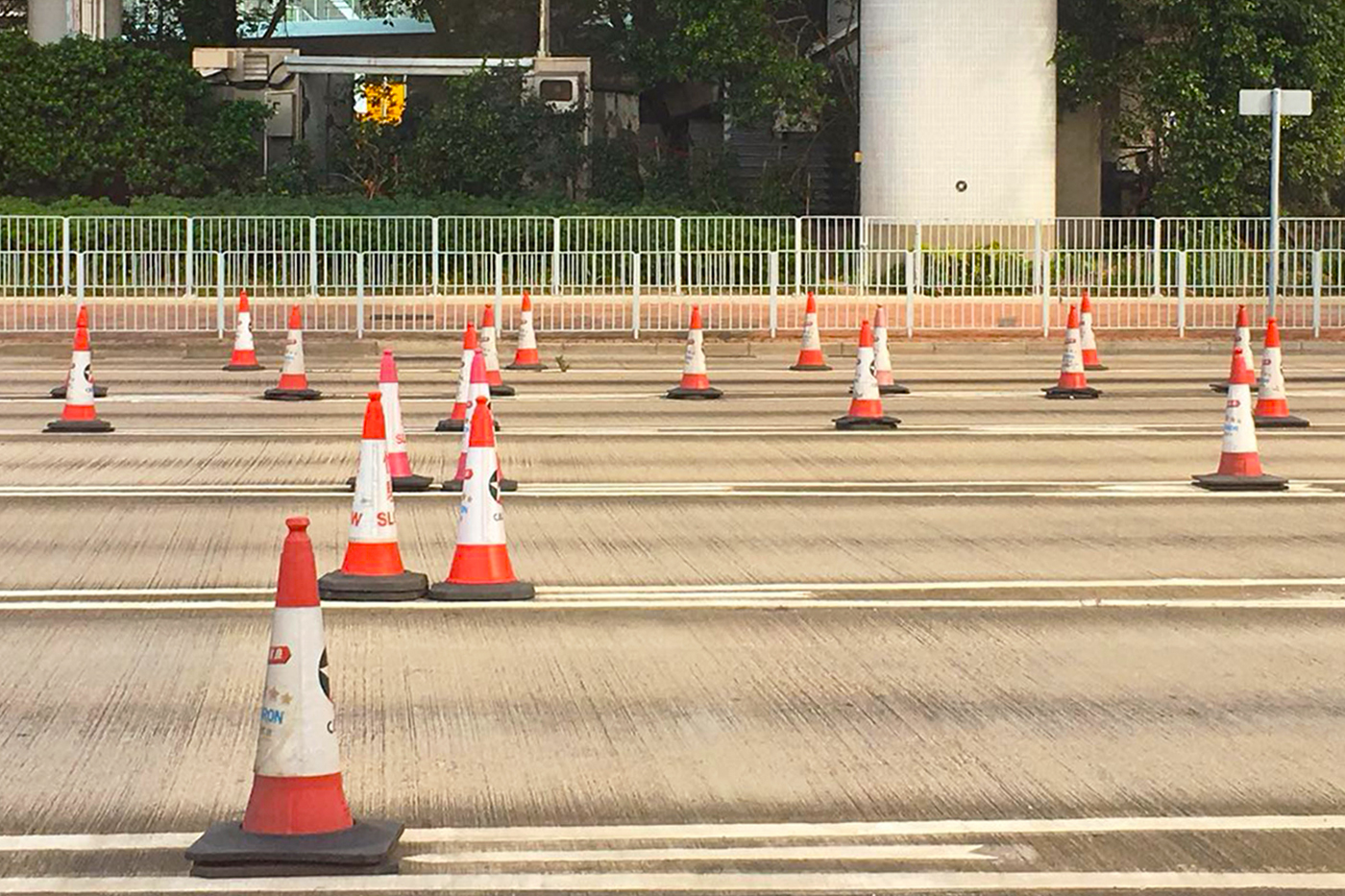 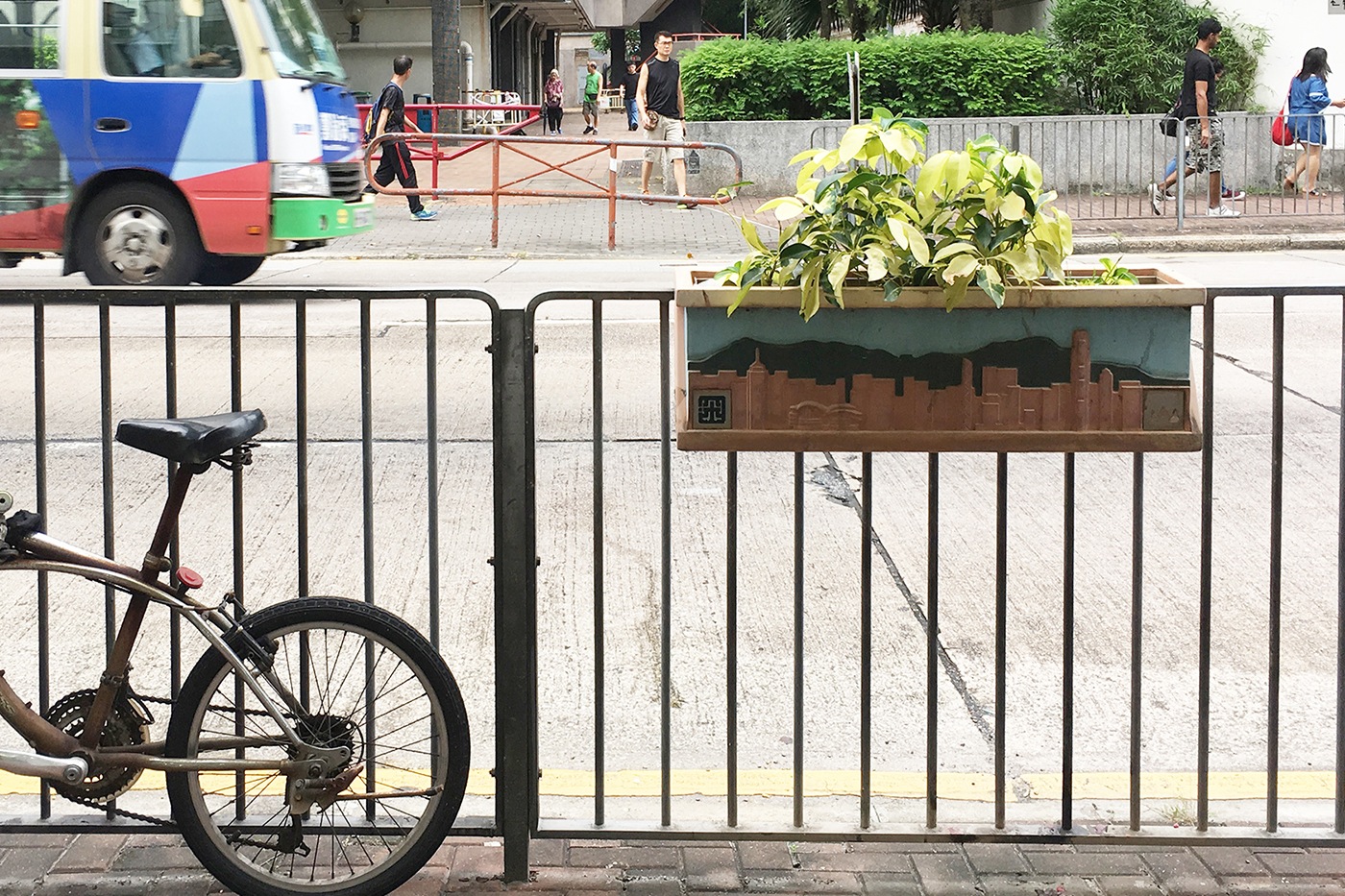 When people emerge from Prince Edward MTR station, they are greeted by the banners that hang from roadside fences, urging them to vote in the upcoming Legislative Council by-election.

When deckhands and dockyard workers finish their shift in the Yau Ma Tei Typhoon Shelter, they climb a makeshift staircase and hop a fence, rather than walk an extra hundred metres to the nearest crossing.

Over on Wong Chuk Street, in Sham Shui Po, the owner of a street market stall has festooned a fence with garlands of can4 pei4 (陳皮) – dried tangerine peel used as medicine and seasoning. Salted fish are hooked to a nearby fence so they can cure in the dry winter air.

No matter where you go in Hong Kong, you’ll always find these grey metal fences, stretching down the pavement as far as the eye can see. They line the sidewalks of Nathan Road, the quiet streets of Mui Wo, even the scenic waterfront promenade between Deep Water Bay and Repulse Bay. They’re everywhere. If you took all of Hong Kong’s roadside railings and laid them out end to end, they would stretch all the way to the Terracotta Warriors in Xi’an, nearly 1,500 kilometres away.

That’s more than double the amount of railings that existed just eight years ago, in 2010, when the government reported there were 730 kilometres of roadside fences in Hong Kong.

“They are nasty, cheap and ugly,” says Peter Cookson-Smith, an urban planner who has worked in Hong Kong for more than 40 years. “They became really ubiquitous in a short period of time. The result is simply ridiculous. People often have to walk a significant distance to actually cross a road and then the same distance back to their destination. It is massively inconvenient but also massively uncomfortable in our crowded street conditions.”

Despite their omnipresence, the origin of these fences is a bit of a mystery, and it’s not clear how and why they became so widely used. For many people, they’re a source of daily frustration as they are herded down overcrowded footpaths. Even when they cross the street, they are often forced to wait on a traffic island where they are penned in like cattle on a farm.

Rather than put up with overcrowded sidewalks, many people avoid them altogether, bypassing the fences and walking in the roadway. “I’ll get hit by cars one day, because the sidewalks are super narrow, and then there are the fences, and I’m a fast walker, so I end up walking on the street all the time,” says Tsim Sha Tsui resident Merve Bedir.

So why do the fences exist in the first place? You might think they are there to help pedestrians climb Hong Kong’s many staircases and hilly streets, but landscape architect Melissa Cate Christ notes that they do not include handrails, making them useless in terms of accessibility. In fact, the fences are absent from many slopes where they might prove useful, like on hilly Peel Street, where some portions of the sidewalk are more than a metre above the road surface. A couple of years ago, neighbourhood residents built ramps and railings to keep people from falling off the sidewalk, but government workers removed them. 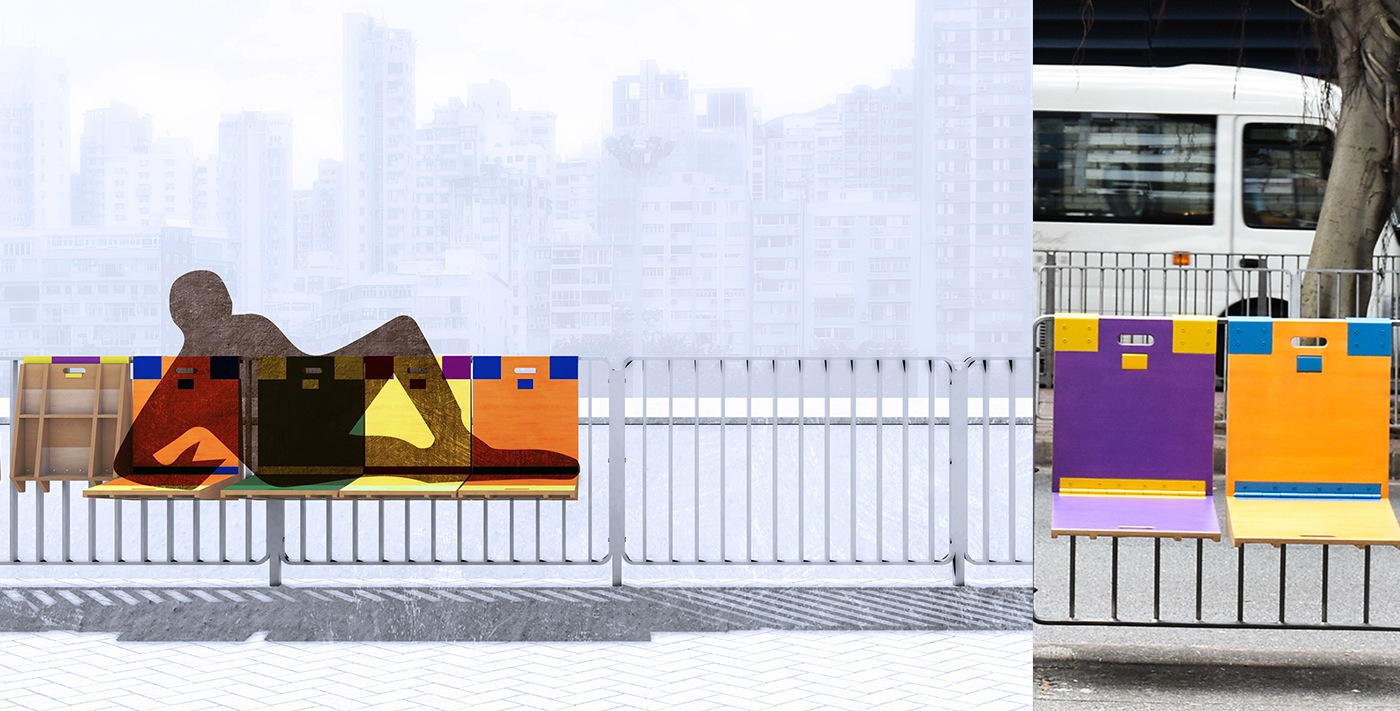 The street is not only for walking, it’s part of the city life – Folding chair developed by the Design Trust

The fences aren’t there to protect pedestrians from speeding vehicles, either. “They are not built to withstand car crashes,” says Cate Christ. Instead, it’s the other way around: the railings are meant to block pedestrians from getting in the way of cars. In many other cities, pedestrians have the right of way, meaning that it’s a motorist’s responsibility to slow down and stop if someone is crossing the road. That’s not the case in Hong Kong.

“The government uses railings not for safety but to manage and demarcate space,” says designer Zoey Chan, who studied the fences as part of a project funded by the Design Trust year.

Two government departments are responsible for the fences. First, the Transport Department decides whether they are needed in any given location. The sidewalks outside cinemas, theatres, schools and “other places where similar sudden large pedestrian flows might be expected” are top priorities, according to a government spokesperson. The department also puts fences near intersections in order to guide people into crosswalks, and it will install them on any street where pedestrians often cross back and forth, getting in the way of cars.

Next, it’s up to the Highways Department to actually install the railings. They have two basic models, both made of steel, one with horizontal bars and another with vertical bars. It costs around HK$300 to install one metre of railings and another HK$400 per year to maintain it. In some cases, local district councils will dip into their budget to pay for decorative railings.

Chan says it can be hard to understand the Transport Department’s decision making process. “They are very ridiculous in some ways,” she says. In 2010, a fence was built along an especially crowded part of Dundas Street in Mongkok, which made the sidewalk even more packed than before. Rather than walk down the fenced-off portion of the sidewalk, people weave between cars and minibuses in the roadway.

The government is aware that people hate the fences. “As overuse of railings could cause public inconvenience and adverse effects on streetscape and footway capacity, the [Transport Department] will consider the need and extent of railings carefully, and conduct regular reviews to determine whether existing railings should be maintained, removed or replace,” says a spokesperson. But in many cases, including that of Dundas Street, the department isn’t willing to widen sidewalks – so it’s pedestrians who pay the price for traffic congestion.

The fences are installed on the assumption that Hong Kong’s streets are nothing but funnels, spaces designed to move the greatest number of cars, trucks, buses and pedestrians through as efficiently as possible. “The continued result is a constant deterioration in the urban environment and a constant emphasis on efficiency rather than good urban design,” says Peter Cookson-Smith.

Urban planning activists have been fighting against this for years. Sometimes they are even successful. In 2003, the government replaced all of the surface crossings around the Peninsula Hotel with a maze of tunnels. Ten years later, Paul Zimmerman recorded a video that demonstrated how the tunnels had turned a 30-second crossing into a five-minute underground ordeal. People don’t like being treated like groundhogs, and years of complaints about the tunnels finally convinced the government to reopen a single crosswalk across Salisbury Road.

Some designers have decided that if you can’t fight the fences, you’d better work with them. When Zoey Chan completed her research, a team led by architect Gary Chang developed a folding bench that can hang from the roadside railings. It’s more than just a seat: when it’s folded up, the underside of the bench contains slots that can be used to share books, newspapers or magazines.

Chan says the benches are based on the idea that streets should be places where you can linger and enjoy life. “The street is not only for walking, it’s part of the city life,” says Chan. “Our living spaces are getting smaller and smaller so more of our lives will be spent on the street. People have to reclaim the streets.”

Hongkongers are already one step ahead. When the street railings aren’t being used to dry tangerine peels and fish, people hang their wet laundry on them. They use them to lock up their bicycles. Bar owners install tabletops on the railings so their customers can drink outside. People aren’t just reclaiming the streets – they’re reclaiming the fences.

They're everywhere – and they're becoming more common. As roadside fences proliferate around Hong Kong, some people have come up with ingenious ways to make them useful.