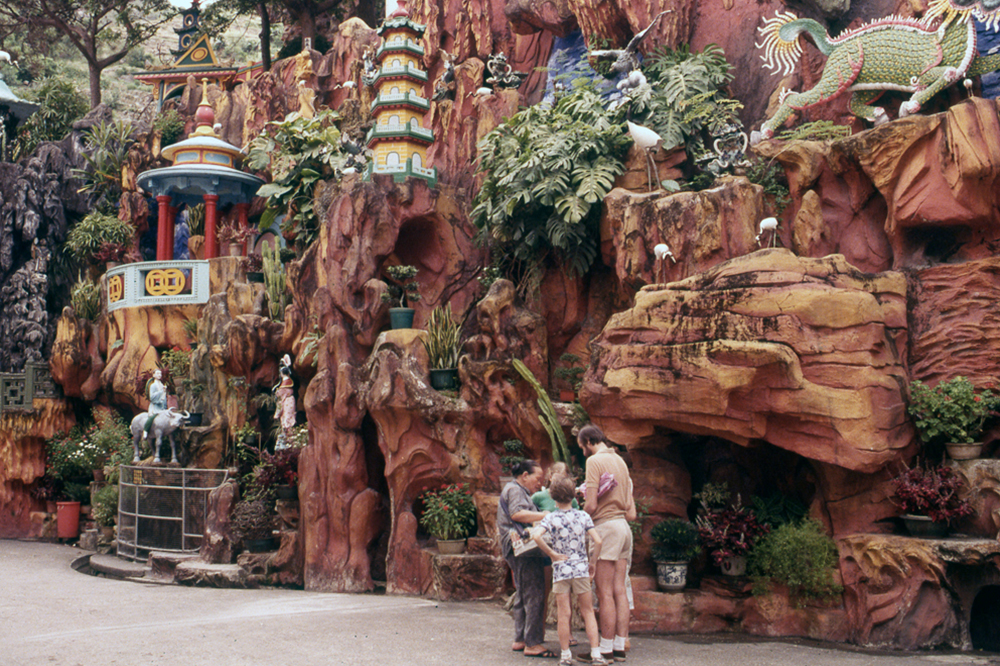 Tiger Balm Garden is gone forever, but its spirit remains. Work is underway on restoring Haw Par Mansion, the only surviving portion of a vast estate that included the renowned theme park, which was demolished in 2004. At the same time, artist Adrian Wong is finishing work on an installation based on one of the park’s concrete tigers, using the legacy of Tiger Balm Garden to explore cultural identity in postcolonial Hong Kong.

“Everybody of a certain age would have been to Tiger Balm Garden,” says conservation architect Roger Wu. It’s a grey spring day and he is standing beneath a construction hoarding on Tai Hang Road, clad in a white hard hat, grey turtleneck and black jacket. He pulls out his phone and opens a photo of a young boy and girl sitting with a fashionable woman in sunglasses. “That’s me, my sister and my mother, sitting on a concrete boat that was once in the park,” says Wu. 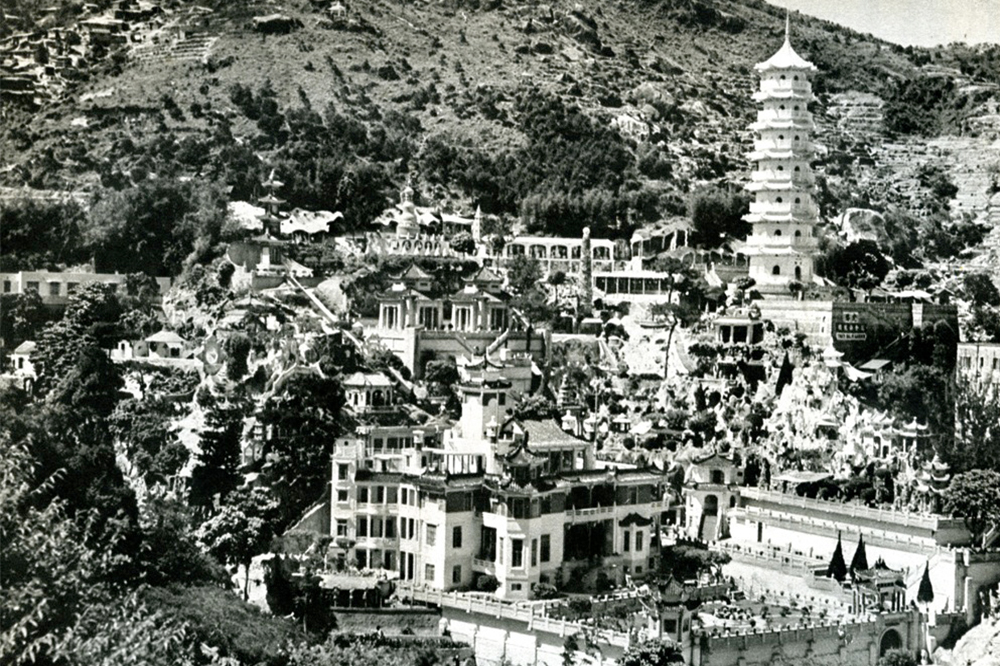 Wu now runs the Haw Par Music Foundation, which is working with the government to transform the Haw Par Mansion into a music academy. The mansion was built in 1935 by Aw Boon Haw and Aw Boon Par, two Burmese-Chinese brothers who created Tiger Balm, a camphor and menthol-based ointment meant to ease pain and inflammation. The brothers used their Tiger Balm bounty to establish a series of Chinese newspapers across Southeast Asia, and they built mansions in Singapore, Hong Kong and Fujian, their ancestral homeland.

They didn’t stop there: the mansions in Singapore and Hong Kong were accompanied by theme parks designed to promote traditional Chinese values. In his book Landscapes Lost: Appreciating Hong Kong’s Heritage Cultural Landscapes, conservationist Ken Nicolson writes that Aw Boon Haw was worried that ethnic Chinese residents of Singapore and Hong Kong — both British colonies — were losing touch with their cultural identity. His vision for the parks was to promote Buddhist, Taoist and Confucian morality – all the while promoting the Tiger Balm product.

The Hong Kong park sprawled across 3.2 hectares in the hills above Tai Hang. It was a riotously colourful collection of sculptures that surrounded the 44-metre-tall Tiger Pagoda, which could be seen for miles away. Many visitors remember the park’s concrete tigers, including the bow-tied Mr. Tiger, who greeted them as they entered the park. But for others, it was the often disturbing religious caricatures that left a deeper impression. “The freakish and stern faces of many of the characters made the experience more like a trip with Alice in Wonderland, where not everyone Alice met was friendly,” writes Nicolson. “Some scenes of sculpted animals were fun and carefree while others were menacing. Benign images of Buddha sat beside vile scenes of purgatory.”

A diorama depicting the Ten Courts of Hell was particularly memorable. The Singaporean version, which still exists, hints at what Hong Kong visitors experienced: severed heads, topless women being disemboweled by demons, a man sawed in half. Each scene depicted how those who committed mortal sins such as prostitution, gambling or lack of filial piety would be punished in the afterlife. “A lot of people remember that because it gave them nightmares,” says Wu. “Nobody wants to think that they’ll get their tongue cut out.”

The park fell into a long and gradual decline after Aw died in 1954. A portion of it was sold to a developer in 1971, and while the park was restored for its 50th anniversary in 1985, it lasted for little more than a decade before it was closed for good. In 1998, Aw’s adopted daughter, Sally Aw, lost the family fortune in the Asian financial crisis, and she sold Haw Par Mansion and Tiger Balm Garden to Cheung Kong, Li Ka-shing’s property company. The garden was replaced by an enormous new housing estate while the mansion languished until its ownership was transferred to the government.

That’s when the Haw Par Music Foundation made a bid to convert the mansion into a music school. “It will be 50/50 Chinese and Western music, in keeping with the building’s eclectic style,” says Wu. Like Aw himself, the mansion is caught between worlds. It’s an example of the Chinese Renaissance architecture that was popular in Hong Kong from the 1920s to the 1960s, which pasted Chinese motifs onto a Western architectural foundation. “It was a collision of East and West,” says Wu. “The arrangement is quite Western, but the decorative elements are all Chinese.”

Wu opens a door to the pagoda-style spiral staircase on Tai Hang Road and makes his way up to the mansion. He emerges onto a garden punctuated by two fountains and a cherry tree that is just beginning to bloom. “It’s a very formal Western garden, but with plants from this region,” he says. The mansion rises behind, its cream stone and red brick façade capped by a Chinese-style roof clad in mottled green tiles. It looks like a toy model next to The Legend, the gargantuan Cheung Kong development built on the old theme park.

Walking past the cherry tree, Wu passes through a moon gate-inspired door to the high-ceilinged foyer. “This is where they received visitors and dignitaries,” he explains. When the music academy opens, it will serve as a venue for free public concerts. “Anybody can wander in and enjoy the setting.”

Most of the mansion’s other rooms — there are 15 in total — will be used as rehearsal space. Aside from acoustic insulation, the rooms will remain as they were, with painted glass windows made in Italy, parquet wood floors and Burmese-inspired murals. There are other intriguing details, too, like the walk-in safe hidden behind a panel in the master bedroom. “It’s for students who don’t practice enough,” jokes Wu.

Greeting a construction worker, Wu steps into the former dining room and points to small panel next to the fireplace. “There used to be a servant’s hutch down there,” he says, where servants passed food from the basement kitchen to staff in the dining room. He turns around and walks down a set of stairs that lead to the servants’ quarters. It is a warren of small rooms with low ceilings. “Because it was not as ornate as the other rooms, we’re changing this into offices and bathrooms,” Wu says. The building’s reception area will be down here, too, in order to distinguish the mansion’s new vocation from its old use as a private residence. Stepping outside the servants’ quarters, Wu gestures towards a decorative concrete wall built into a nearby slope. “That’s the only piece of Tiger Balm Garden you’ll find left,” he says. Some of the park’s sculptures were saved — you can see them at the Heritage Discovery Centre in Kowloon Park — but everything else was destroyed, including the Ten Courts of Hell, which Wu says will be revived in a “contemporary interpretation” of the diorama.

But the park lives on in Hong Kong’s imagination, something Adrian Wong explores in The Tiger Returns to the Mountain, an immersive installation that opens on March 20. Born in Chicago to Hong Kong parents, Wong visited Tiger Balm Garden in 1985, when he was five years old, and it stayed with him ever since. For Wong, who grew up in a small suburban town of 20,000 people (“five of whom were Chinese, all of whom lived in my house”), the park came to represent Hong Kong itself, especially after his family lost touch with their hometown and stopped speaking Cantonese at home.

In Wong’s installation, the park represents a phantasmagoric version of Chinese culture that has been filtered through the colonial experience – “a ghost of a cliché,” as he puts it. It represents Hong Kong’s embrace of Orientalist tropes, something replicated in the architecture of the Haw Par Mansion, but also in the kung fu movies of the 1960s and 70s, which were often filmed in those modern Chinese Renaissance spaces. Like Wong, Aw Boon Haw was a member of the Chinese diaspora, and his conception of Chinese culture was that of someone from the outside looking in. The same could be said for Hong Kong as a whole.

Tiger Balm Garden was a bizarre, disturbing yet beloved trip into Chinese mythology. And while the park was demolished in 2004, its legacy survives.