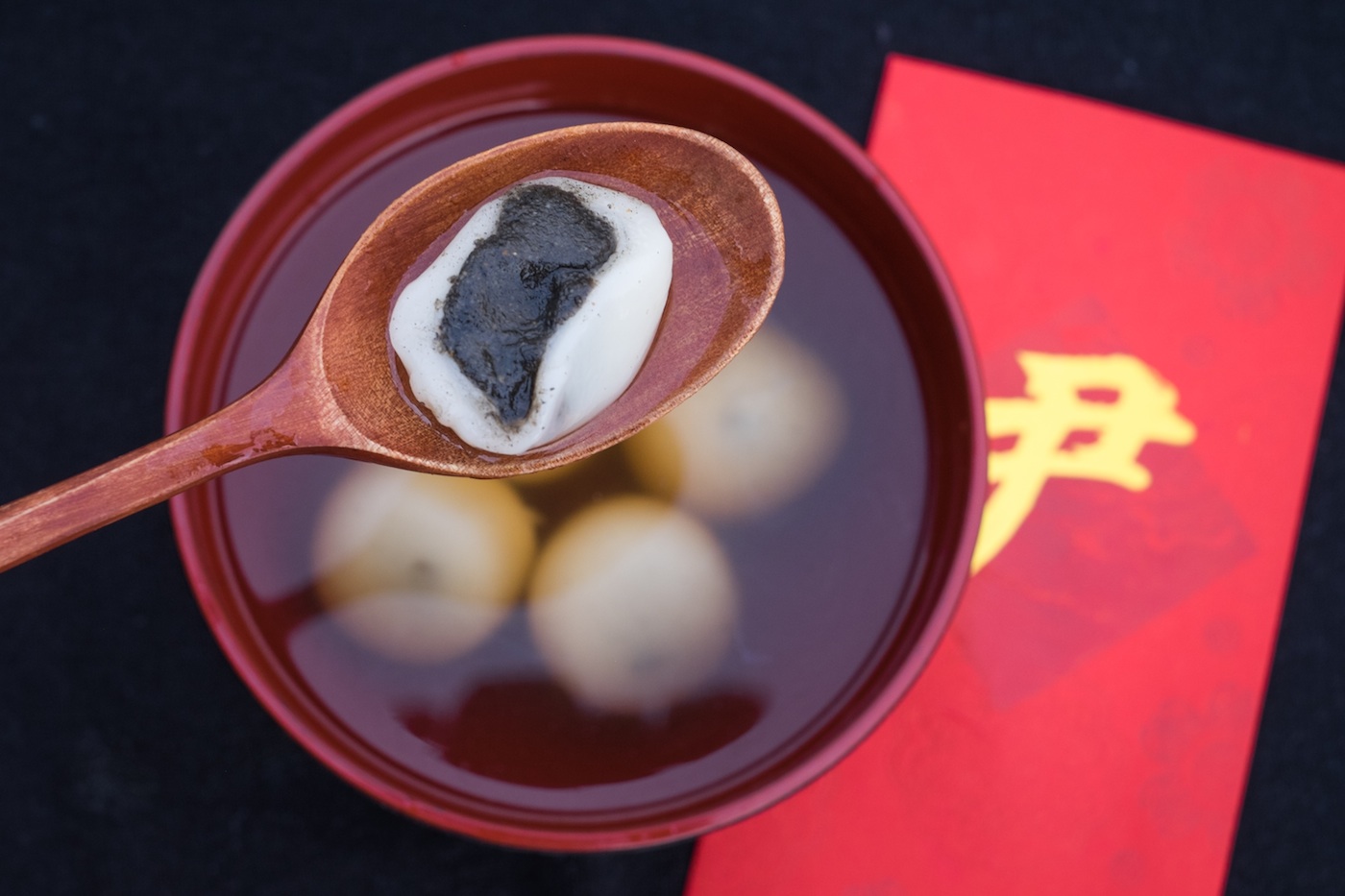 This article was first published on 13 February 2018, the Year of the Dog.

The cold front sweeping through the city just before the Lunar New Year gives us the perfect excuse to indulge in traditional festive treats early. And while every Chinese festival offers no shortage of food options, there is nothing quite as satisfying for the sweet tooth as tong1 jyun2 (湯圓) in this chilly season.

Literally meaning “soup balls,” these glutinous rice balls are often eaten as a symbol of family togetherness and union. Almost all popular dishes for the Chinese New Year involve a play on words and these chewy dumplings filled with black sesame paste or chopped peanuts are no exception. Even if you skip parts of the customary large family meal, it is important to come in time for this dessert, whose name sounds like tyun4 jyun4 (團圓), meaning “to be reunited.” Most families will have one auntie or grandma who is the family’s expert tong1 jyun2 maker.

Traditionally, members of the same clan or those who have the same surname would gather at their ancestral temple to worship and eat these at their grand reunion dinner. In northern China, these glutinous rice balls are still often referred to as yuan xiao (元宵) a more poetic reference to their origins. During the Yongle era of the Ming Dynasty (1402-1424) they were commonly eaten during the Lantern Festival (Yuanxiao Festival) which always falls on the first new moon of the Chinese New Year.

The importance that food names carry in China is reflected in its southern name, which is written in Mandarin pinyin as tang yuan. According to legend, Yuan Shikai, a former emperor and influential statesman during the tempestuous early years of republican China, didn’t like the sound of it since yuan xiao sounds uncomfortably similar to “remove Yuan” (袁消), leading him to order the switch to tang yuan.

The legend behind the original rice balls starts with the story of Yuanxiao, a young girl who was sent to serve the Emperor during the Han Dynasty. She was known as the best tang yuan maker in the kingdom, but was never allowed to go home to see her family. Her depression and homesickness led her to contemplate suicide, which was exactly when one of the Emperor’s trusted advisors, Dong Fangshuo, found her by a palace well, weeping before her final jump.

Dong promised Yuanxiao that he would find a way to reunite her with her family and devised a plan. He pretended to be a fortune teller and convinced everyone in the city that the God of Fire would burn down the entire town on the fifteenth of the month unless everyone hung up red lanterns and set off fireworks to appease him. He also suggested to the Emperor that everyone must prepare copious amounts of tang yuan, the God of Fire’s favourite food.

The Emperor liked the proposal and Yuanxiao’s parents were sent to the capital to help make tang yuan for the festival. This clever plan not only brought Yuanxiao’s family together but also symbolises the unity of the city’s people in their common mission. The shape of the glutinous rice balls also reflects the shape of the first full moon of the year.

The difference between northern and southern glutinous rice balls lie not only in their name but also cooking methods. In the south, they are most often served sweet, while in the north they can also be used in savoury dishes. For Cantonese tong1 jyun2, a sweet rice dough is usually kneaded then wrapped around a filling while for yuan xiao, a sweet solid filling is often made first, then tossed in flour, dipped in water and tossed in flour again until the wrapping is thick enough.

As with most traditional Chinese treats, marketers have found a way to make a festival offering into a year-round dessert. And much like mooncakes, the types of tong1 jyun2 now available year-round include fancy colours and fillings. Traditionally white, tong1 jyun2 can now be found in greens and pinks, filled with chocolate, mashed sweet potato, red bean paste or pumpkin. Most supermarkets also offer the Hong Kong favourites of black sesame or peanut filling in the frozen section year round. Now a staple on the menu of Hong Kong dessert joints, the classic Cantonese way of serving it is in a spicy syrupy ginger broth to counter the lusciously sweet filling.

While we try to keep ourselves warm next to a collection of space heaters and radiators, it’s no question that we’ll be boiling up some tong1 jyun2 to welcome in the Year of the Rat.

The reference point for the city’s handmade tong1 jyun2, a serious investigation into this dessert is not complete without a trip to this extremely popular joint. Go late at night after dinner for a generous serving of delicate yet chewy black sesame dumplings.

Head to Kowloon City for an adventure in mixing and matching your own dessert. This is probably the city’s most famous Chiu Chow dessert place and it’s where you’ll be able to use small tong1 jyun2(without filling) to build your own bowl of dessert soup. Let your imagination and taste buds guide you.

Being included in the Michelin Guide hasn’t made the queues at this popular spot any shorter, but their super smooth black sesame soup and chewy fresh tong1 jyun2 make the wait worth it.

An institution for desserts in Hong Kong, Yuen Kee specializes in traditional Cantonese dessert soups since it was established over 100 years ago in 1855. They still use a stone grinding method for their almond and sesame soups, to which you can add their homemade tong1 jyun2 to.

Most supermarkets stock basic black sesame and peanut tong1 jyun2 in the frozen section. Simply boil them up until they float and serve them in a syrupy ginger soup made from Chinese slab sugar and generous amounts of fresh ginger.

For a home-made version why not try this recipe from The Woks of Life.

It's time to indulge in one of Hong Kong's favourite Chinese New Year treats.