Hong Kong by Foot: A New Generation of Tours is Immersed in Street Life When Paul Chan learned about Hong Kong tour guides abusing their clients, bullying them into making purchases at overpriced pharmacies and jewellery shops, a thought crossed his mind: I can do better.

Much better, as it turns out. Chan is the co-founder of Walk in Hong Kong, which offers walking tours that plunge into the intricacies of Hong Kong life. “We want locals and visitors to feel connected to the more charming facets of Hong Kong – the fabric of Hong Kong,” he says. “We see the city as a theatre with a very rich repertoire.”

And he wasn’t alone. His company is part of a wave of specialist walking tours that reject the dreary image of mass-market tours that shuttle visitors between theme parks, tourist traps and shopping malls. Among them are Hong Kong Free Tours, Little Adventures in Hong Kong, Humid With a Chance of Fishballs and other groups that take a granular look at the things that make Hong Kong unique. Dim sum ladies and carts in Lin Heung. Image courtesy Humid with a Chance of Fishballs. Lunch at a dai pai dong. Image courtesy Humid with a Chance of Fishballs.

Many of them started out by chance, evolving over time. That was certainly the case for Daisann McLane, a longtime travel journalist who launched Little Adventures when she needed a visa to stay in Hong Kong. She started her own company and began to think of what to do with it.

For six years before moving to Hong Kong to learn Cantonese, McLane had written the Frugal Traveler column for the New York Times. “It was like performance journalism – you had to pick a spot on the globe that looked interesting, and then come up with a plan to travel there on a budget, and then go there and write about what happened,” she says. She learned how to parachute into a place and figure it out quickly, but she also “got stuck in many really, really bad tours – guides who would just put you to sleep reeling off facts and figures, large groups that shuffled through amazing places while locals backed off into the shadows to avoid you, scripted tours that you could have done yourself with a guidebook.”

There was one tour that proved just the opposite. McLane was in Kolkata—historically known as Calcutta—when she hired a one-on-one guide to show her around the city. “He was an expat and a teacher who had lived in Calcutta for 25 years, and he took me on an improvised half-day of exploring things I asked him to show me, like Calcutta’s Chinatown, and things I didn’t – falling apart but gorgeous old mansions, amazing street food. He never tried to ‘sell’ Calcutta, was frank about the politics and culture of the place, and had wonderful stories about how he adapted and made a home for himself there and why. It was an exhilarating day, and I’ve never forgotten it.”

Today, McLane employs six freelance tour guides, all of them with a background in journalism or the food industry, who develop bespoke tours for groups of no more than three people. It’s a high-cost, unorthodox approach, but McLane says has offered unexpected rewards. Once, an American doctor said he was interested in traditional Chinese medicine, so McLane took him to an herbal pharmacy she had never visited before. “When I explained to the pharmacist in Cantonese that my companion was a medical doctor, the pharmacist insisted on taking my guest behind the counter and showing him how he put together a prescription,” she says.

It’s through these kinds of grassroots interactions that McLane hopes to show people a more human side of Hong Kong. And these encounters often provides answers to more fundamental questions. “You’d be surprised how little even our highly educated, sophisticated guests know about Hong Kong,” she says. “People in general do not have a clue about Hong Kong’s status, what a [Special Administrative Region] is, and practically no one has heard of the Basic Law. It’s all, ‘Hong Kong belongs to China, right?’” 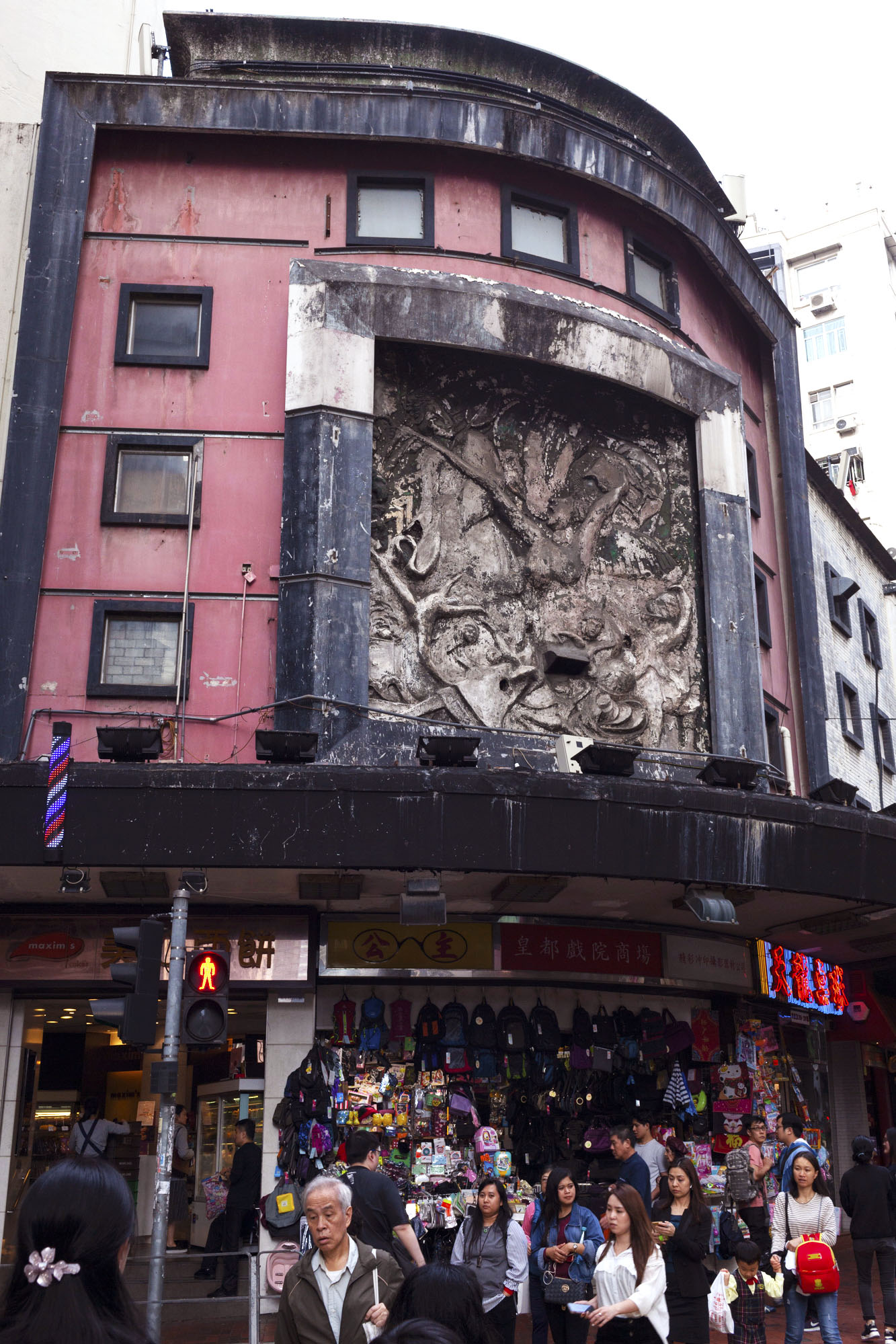 The State Theatre Building. Image courtesy Humid with a Chance of Fishballs. Introducing the history of the State Theatre Building. Image courtesy Humid with a Chance of Fishballs. 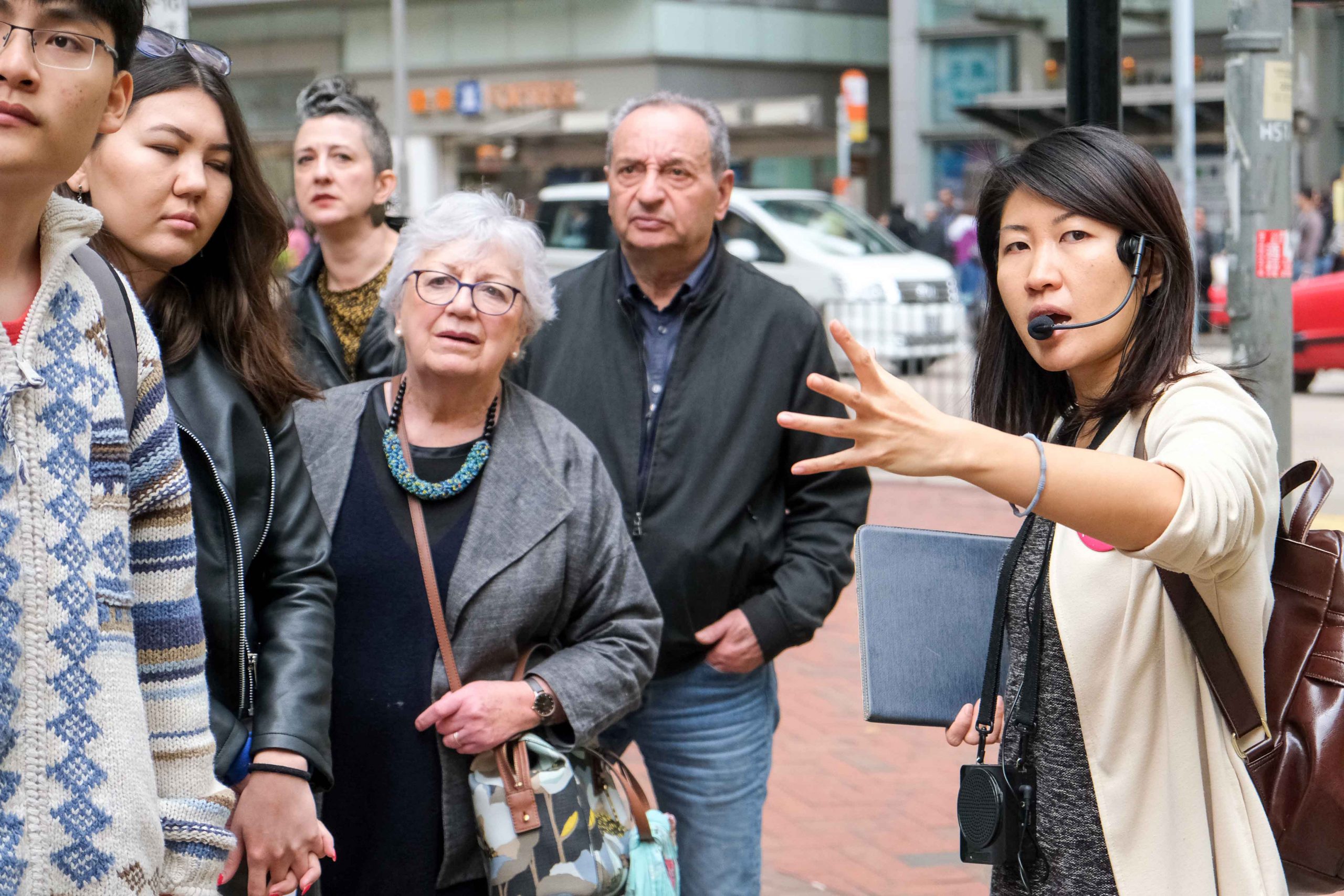 Virginia Chan leading the tours. Image courtesy Humid with a Chance of Fishballs. YouTuber Sonny Side on an exotic foods in HK episode. Image courtesy Humid with a Chance of Fishballs.

That’s an experience shared by other tour leaders, too. “Even our identity is interesting, and people overseas only have a vague idea about it,” says Olivia Tang, Walk in Hong Kong’s managing director. She joined the company to put together a tour of Sham Shui Po, the working-class neighbourhood where she grew up. Its flea markets, family-run businesses and teeming streets make it particularly alluring to visitors, but it’s also a window into the inequities of Hong Kong life.

“Sham Shui Po is like the dystopian version of Hong Kong,” says Tang. “On my tour we talk about brothels, cubicle homes, people who collect cardboard. I have charts and facts and figures to introduce the wealth gap problem, which helps people see that these are just working and trying to earn a living, but because of the cost of living, they can’t. It can get a bit heavy, which is when I take them to Kung Wo for tofu fa.”

Chan and Tang say they are “mindful of the impact” of bringing tourists to areas where marginalised people are trying to get by. But they also think that having first-hand encounters can lead to positive change, especially since their customers include not only tourists but expats and locals. Free Tours, which offers pay-what-you-can walking tours, refers its customers to charities and NGOs like Food Angels that help address some of the problems they highlight on their tours.

The tours don’t all dwell on Hong Kong’s social problems. Many are straightforward celebrations of the city’s heritage and culture. Humid With a Chance of Fishballs was founded by Canadian-born Virginia Chan after she moved to Hong Kong and began to explore the city’s food scene. She takes visitors to offbeat neighbourhoods like Whampoa and Kowloon City to sample flavours like halal beefcakes, Chiu Chow food and cart noodles. Chan says she starts with “a whole lot of online research” before scouting out restaurants in person, which leads her to build a tour itinerary that she tests out on friends before offering them to customers.

Walk in Hong Kong starts every new tour with a long research process – “like a university thesis,” says Paul Chan (who is not related to Virginia). That involves archival research and interviews with academics, but also plenty of chance encounters. Once, he and Tang ended up chatting with the owner of a Temple Street cabaret, who turned out to be a veteran performer himself. He took the time to explain the ins and outs of the street’s faded nightlife, where veteran crooners serenade a largely grey-haired crowd of revellers. They also recall meeting some fruit stall owners in the Yau Ma Tei wholesale fruit market who revealed that many of the families in the market had intermarried over the years, creating a particularly tight-knit community.

In one case their research led to tangible change. When Walk in Hong Kong began delving into the history of the State Theatre for one of its tours, they helped spearhead a conservation movement that ultimately saved the theatre from redevelopment. “Our mission is to show what’s unique about Hong Kong and if that uniqueness is under threat, we have a moral obligation to do something,” says Paul Chan.

That sense of duty extends even to the ongoing protests. In early October, Free Tours co-founder Michael Tsang began guiding visitors through protest marches, explaining the meaning behind the slogans and the reasons so many people have been taking to the streets for the past six months. “I didn’t expect anyone would join,” he says, but he ended up drawing more than a dozen people from the United States, Spain, Macau and Germany. “The main purpose of the tour is not making money, it’s helping people understand Hong Kong,” says Tsang. “For the people on the tour, they’re not reading about it in the media – they’re seeing it with their own eyes.”

But the protests have also caused the number of visitors to Hong Kong to plummet, which has made life difficult for tour operators. Virginia Chan says the number of clients is down “50 to 60 percent” and she has taken to making YouTube videos to shore up her business. McLane says that business started picking up in September and October after a disastrous August, but the widespread disruptions and university sieges of November have once again kept people away.

“There seems to be a direct correlation between the column inches that Hong Kong protests get in the overseas media, and the ups and downs of our business during the protests,” she says. “The scenes of massive teargassing, young people being shot and police brutality really are scaring people away from Hong Kong.”

It’s impossible to say what will happen next. But in one way or another, Hong Kong will survive, and there will still be people committed to keeping its culture alive and relevant. “It’s not normal tourism,” says Tang. “It’s forging a connection with the community.”


Hong Kong by Foot: A New Generation of Tours is Immersed in Street Life