Hong Kong in Vancouver – Part I: Chinatown is Fighting For its Life 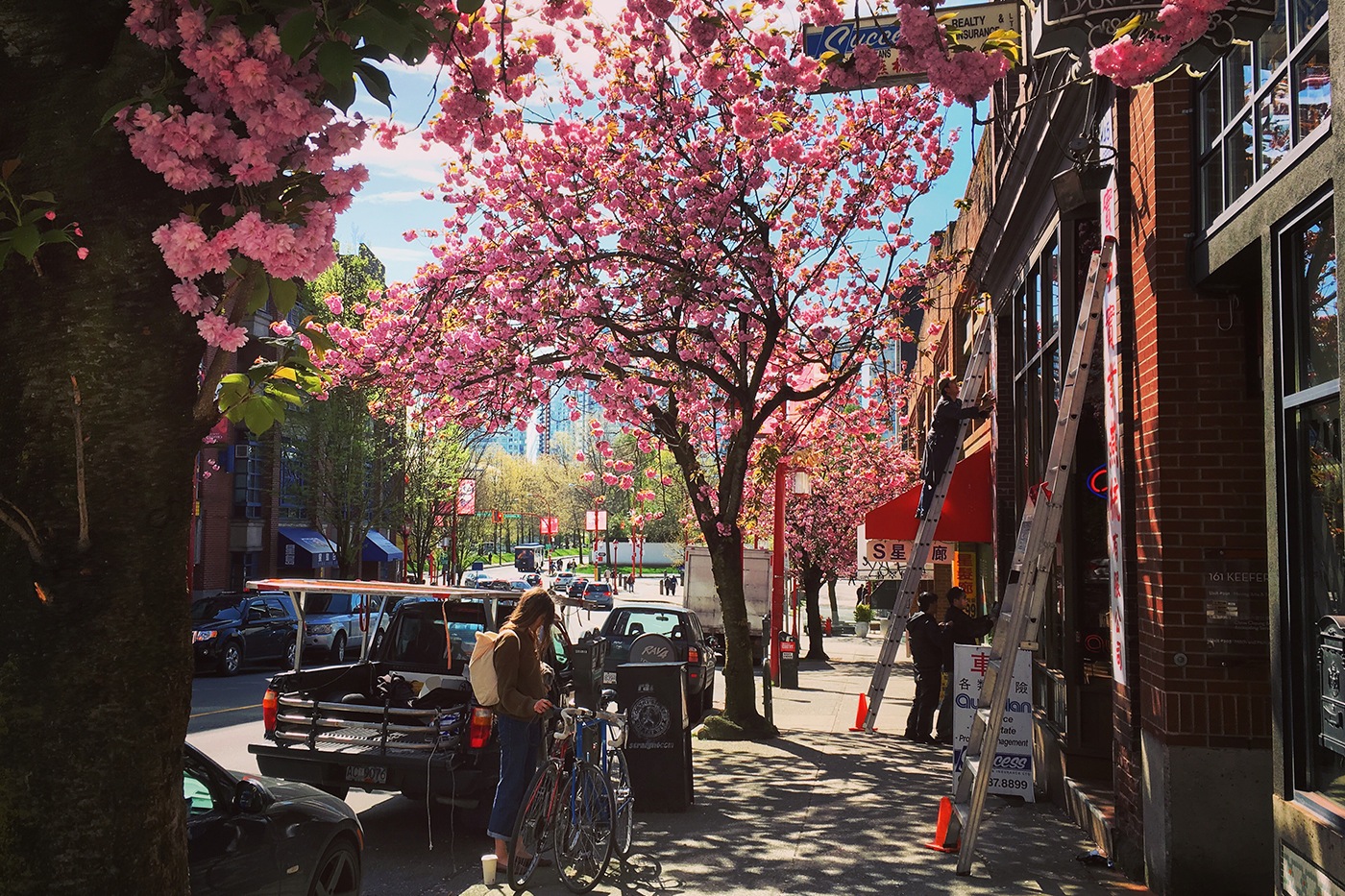 It’s Cantonese opera day at the Toi Shan Benevolent Society and a jaunty melody is drifting down to the gated entrance on Hastings Street. Upstairs, beneath panels of fluorescent lights, surrounded by leftover Christmas tinsel and celebratory red banners, an elderly couple are performing on stage, reading from a script. A pile of mahjong tiles sit waiting on a table nearby.

A few blocks away, past the shuttered storefronts of Hastings and the Chinese medicine shops of Main Street, it’s a different scene entirely at Juke, a restaurant that opened last year inside a flashy new condominium building. Beneath a neon sign of a naked woman — a prop salvaged from the Canadian TV show Intelligence — baskets of fried chicken are served amidst a slick interior of brick, concrete and artfully torched wood. Outside, a single Chinese sign nods to the restaurant’s location: 七天開放. “Open seven days.”

This is Vancouver’s Chinatown in 2017, a strange mix of gentrification and generations-old culture, where Chinese grocery stores are vanishing and buzzy new bars take their place. An influx of upmarket condo buildings has already changed the face of the neighbourhood, whose soaring land values and property taxes threaten to displace businesses and institutions that have been around for decades. New development projects, including a plan by the city government to rezone Main Street for high-rise apartment buildings and large-format retail, have unleashed a storm of controversy.

Last week, an angry crowd of Chinatown old-timers and youthful activists flooded a series of public hearings for a controversial new condo development. The proposal for 105 Keefer calls for a 12-storey building to be built next to a memorial for Chinese-Canadian war veterans. Many in the neighbourhood are concerned that it will be yet another step towards a Chinatown that is less affordable – and less Chinese. “It’s the feeling of the community that the larger developments are out of scale and lacked character,” said Carol Lee, the chair of the Vancouver Chinatown Revitalization Committee, at the hearing. “Trading character for public benefit is not worth it, and the pace of development puts pressure on existing businesses and residents.”

Younger activists were more blunt. “This is the story: erasure,” wrote designer Todd Smith on Twitter, as he outlined the ways Vancouver’s Chinese community has been historically marginalised. At the hearings, many older Cantonese-speaking attendees complained of poor translation services. “Why won’t the city translator say white people? Race is so central to this discussion,” wondered Megan Lau, a writer and editor. Others resented the fact that proponents of 105 Keefer kept saying that Chinatown’s long history of racial discrimination had no part in the debate. “This isn’t about history, or racism? How are these issues separate from this proposal?” fumed activist Joanna Yang.

Vancouver’s Chinatown is changing – and it’s not clear whether it can survive these changes. Many fear that if the forces of gentrification are not held back, the neighbourhood may disappear altogether. That may seem overblown, given that Chinatown has existed for as long as Vancouver itself, but cities across North America are haunted by the ghosts of extinct Chinatowns. In Victoria, Canada’s oldest Chinese neighbourhood has become little more than a tourist attraction. In Portland, Oregon, Chinatown is marked by red lampposts, a ceremonial gate and not much else.

The irony is that nearly one in five Vancouverites is Chinese; the city’s metropolitan area is home to more than 500,000 people of Chinese descent. Many neighbourhoods are filled with Chinese businesses, and public services are widely available in Cantonese and Mandarin. Vancouver city councillor Kerry Jang suggested last year that Chinatown has outlived its usefulness, now that “you can get Chinese groceries on every street corner.” So the question is, what will Vancouver lose if Chinatown disappears?

A refuge – and a prison

Vancouver is located on the territory of the Coast Salish peoples, who have lived along the British Columbia coast for thousands of years. Europeans arrived in the late 18th century, and it was another hundred years before the Canadian Pacific Railway selected a site on Burrard Inlet to end its transcontinental railroad. Those tracks were laid by Chinese workers, most of whom came from from Sze Yap (Sei3 Yap1 四邑), a group of four impoverished counties in the southwest of Guangdong province. Drawn to Canada by stories of Gold Mountain (Gam1 Saan1 金山), where men could become fabulously rich by panning for gold, many young migrants were instead trapped in poverty as they laboured at subpar wages to pay off the debts of their voyage.

Chinese workers earned a fraction of what their white counterparts were paid, and yet the CPR assigned them the most dangerous tasks. More than a thousand were killed as they blasted dynamite through mountains, or succumbed to diseases like scurvy, which was particularly common as Chinese workers were not paid enough to afford fresh fruits and vegetables. After the railroad was complete, many of the surviving workers ended up penniless in Vancouver, where about 90 Chinese people had settled around Dupont Street, now known as Pender Street, a low-lying area near the docks and lumberyards of Burrard Inlet and False Creek.

In 1889, just three years after Vancouver was founded, its budding Chinatown included 17 Chinese-owned shops, a Chinese Methodist Church, two gambling houses and two companies that imported opium, which was legal until 1908. Over the years, they were joined by Cantonese opera houses, benevolent associations, Chinese schools and a hospital. By the 1890s, Vancouver’s Chinatown was the largest and most vibrant Chinese community in Canada, with more than a thousand inhabitants, many of them former residents of Victoria’s Chinatown. Chinese merchants and associations built elegant new buildings along Pender Street, with recessed balconies that recalled the shophouses of southern China. Sun Yat-sen lived in Vancouver’s Chinatown on three occasions as he travelled the world, raising money to overthrow the Qing Dynasty. But Chinatown was a prison as much as it was a refuge. Restrictive covenants barred Chinese people from living elsewhere in Vancouver. And as the country’s Chinese population continued to grow, Canada imposed a series of escalating head taxes on new Chinese immigrants, while federal legislation banned Chinese workers from most industries and professions. Many Chinatown buildings were designed by a man named WH Chow, for example, but are officially listed as being the work of other architecture firms, because Chow wasn’t allowed to officially practice as an architect.

Those kinds of restrictions were the result of a political climate that saw Asian immigrants as a “yellow peril” that threatened the jobs, health and morality of white Canadians. Groups like the Asiatic Exclusion League whipped up racist fervor, and in 1907, mobs of white men descended on Chinatown, beating up dozens of people and “wrecking all that was movable and breakable,” according to one observer. It was not the first time white people had attempted such a pogrom: 20 years earlier, a group of 300 white workers had destroyed a Chinese labour camp on the Vancouver harbourfront.

Despite the threat of violence, Chinatown continued to grow until 1923, when Canada passed the Chinese Exclusion Act, which prohibited all Chinese immigration. Chinatown’s population began to decline, especially as the Great Depression plunged Vancouver into economic hardship in the 1930s. Home to 13,011 people in 1931, Chinatown’s population dwindled to 7,174 just ten years later, as the old generation died off and families left for other cities in Canada. In his novel The Jade Peony, Vancouver-born author Wayson Choy evokes the struggle of those lean years:

In the city dump on False Creek Flats, living in makeshift huts, thirty-two Old China bachelor-men tried to shelter themselves; dozens more were dying of neglect in the overcrowded rooms of Pender Street. There were no Depression jobs for such men. They had been deserted by the railroad companies and betrayed by the many labour contractors who had gone back to China, wealthy and forgetful. There was a local Vancouver by-law against begging for food, a federal law against stealing food, but no law in any court against starving to death for lack of food. The few churches that served the Chinatown area were running out of funds. Soup kitchens could no longer safely manage the numbers lining up for nourishment, fighting each other. China men were shoved aside, threatened, forgotten.

Things improved slowly after World War II. The Holocaust had thrown the government’s racist policies into disrepute, and the Chinese Exclusion Act was repealed in 1947. After nearly a century, Chinese-Canadians were finally given full citizenship. But immigration restrictions endured until 1967, when Canada officially abolished race from its immigration policy. That ushered in a new era for Chinatown, as thousands of new migrants moved to Vancouver from Hong Kong, Southeast Asia and Taiwan. In a sense, these were the golden years of Chinatown, when Pender Street basked in the glow of neon signs and banquet halls like Ming’s served Cantonese food late into the night. 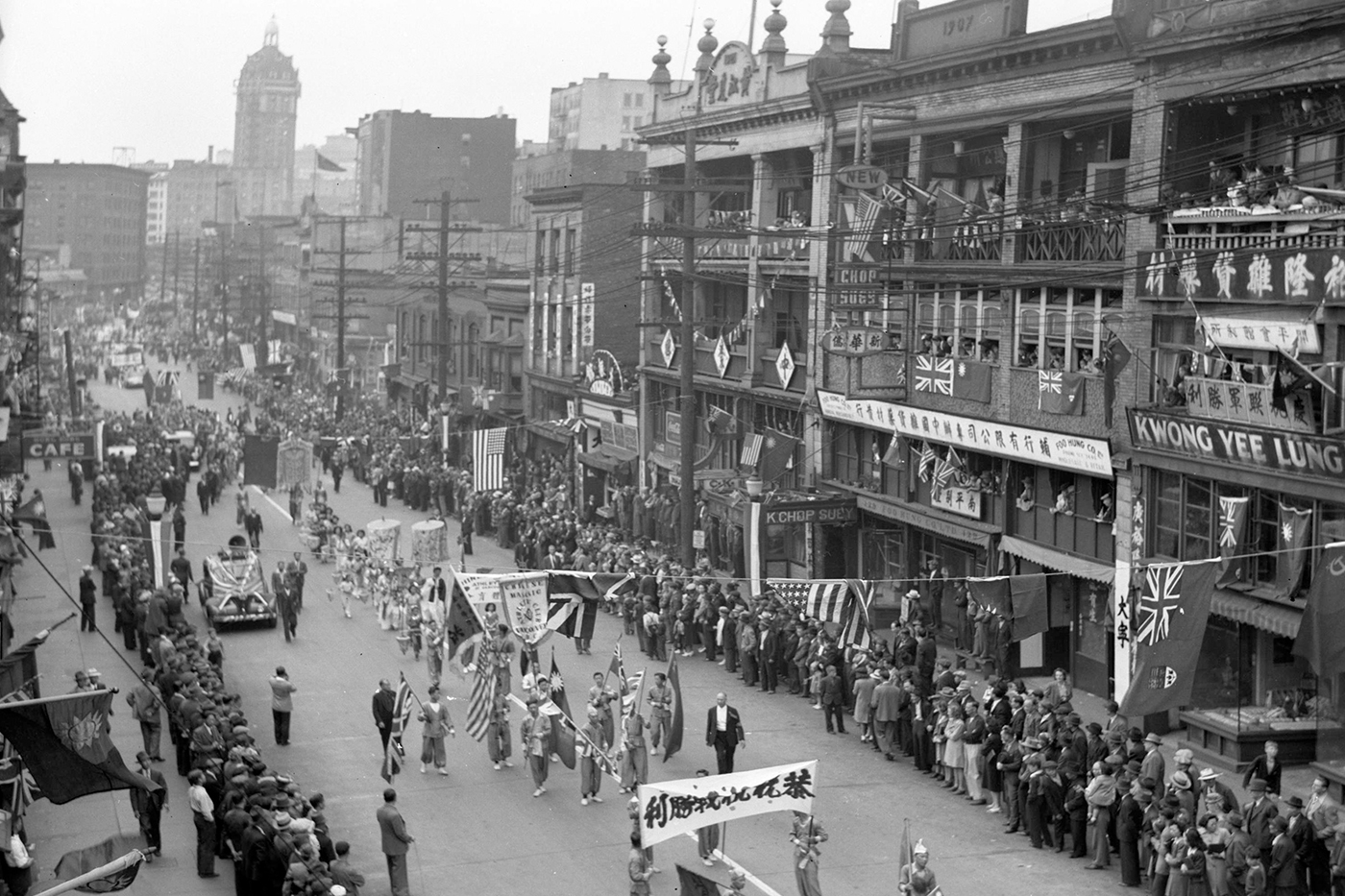 Pender Street after the defeat of Japan in 1945. Photo courtesy City of Vancouver Archives.

“Chinatown boomed in the 1970s,” recalls Hayne Wai, a former president of the Chinese Canadian Historical Society of British Columbia. It’s a cool grey morning and Wai is standing inside the Sun Yat-sen Classical Chinese Garden, which was the first authentic Chinese scholar’s garden outside China when it opened in 1986. For two years, workers from Suzhou built everything by hand, and it is still maintained with the same level of care. As Wai speaks, a worker carefully prunes an ornamental tree. “That will probably take her all day,” he says.

Wai was born in Hong Kong to a Chinese-Canadian mother whose family had left Victoria when she was a child. When the Chinese Exclusion Act was abolished in 1947, she successfully petitioned the Canadian government for citizenship and moved the whole family to Vancouver. Although they settled on the city’s prosperous west side, Wai made frequent visits to Chinatown, which was being infused with fresh energy from every new wave of arrivals. “Dim sum arrived here in 1971,” he recalls. The sidewalks of Pender, Main and Keefer streets were thronged with shoppers. “People were lining up to get into these places.”

Things stayed that way through the 1990s. “Dollar Meats had the best lap cheong in the city – 25 years ago you had to fight to get in there,” says Wai. Now it’s empty, not because the market for Chinese sausage has dried up, but because you can now buy it in dozens of places across Vancouver. More than 100,000 people moved from Hong Kong to British Columbia before the handover in 1997, with immigration reaching a peak in 1994, when 16,000 Hongkongers moved to the province. Most of them settled in more suburban locations than previous Chinese immigrants. “Chinatown is too lou5 waa1 kiu4 (老華橋) – old immigrant,” said one Hongkonger who settled in a well-to-do suburb.

Today, there are Chinese commercial districts throughout suburban Vancouver, especially in Richmond, a city of 220,000 whose population is more than 50 percent Chinese. Big box grocery stores sell fresh locally-grown Chinese vegetables and products imported from Asia; Hong Kong and Japanese chain stores fill glossy shopping malls with ample parking and direct connections to the SkyTrain, Vancouver’s metro system. These days, when somebody is looking for great char siu, or a Cantonese-speaking doctor, they usually head to Richmond. There’s just one thing missing. “There’s no history there,” says Wai. “The history’s here.”

Ming’s was one of Chinatown’s biggest attractions in the 1960s and 70s. Photo courtesy City of Vancouver Archives

In the second part of this series, meet the activists fighting to keep Chinatown alive.


Hong Kong in Vancouver – Part I: Chinatown is Fighting For its Life

Vancouver's Chinatown has survived riots and racist laws. How will it deal with gentrification?