At first, Jeremy Cheung used Instagram like anyone else. “It was like a personal diary,” he says. But when a group of dedicated Instagrammers called HK InstaYay invited him to join one of their photography events, he realised he could use the social media app to do much more than post photos of friends and food. “I started to get more involved and think more about how to use photography as a tool to capture the city and the things that I like,” says Cheung. It turns out Cheung has a pretty interesting vision of Hong Kong. His nearly 61,000 followers turn to his feed for moody images of the city’s streets. Many have a cinematic quality, such as an image taken from a footbridge of pedestrians crossing the street while bathed in the headlights of waiting vehicles. In another photo taken just a few centimetres above a puddle, the red hue of stoplights bleed into a sultry twilight. Many images make use of double exposure, a technique in which two images are recorded on the same negative, layering scenes like so many shadow puppets. Cheung says he has two goals for his photography. “One is a documentary style to capture and freeze moments of the disappearing or vanishing Hong Kong, because the buildings are demolished in a very fast way,” he says. “I’m feeling an urge or responsibility to document the life here because maybe in 10 years time it will be gone.”His other ambition is to capture a certain feeling about the city – hence the double exposures, which often impose a typically Hong Kong visual element on a streetscape, such as mosaic tiles or streaks of nighttime traffic shot at long exposure. “I love film photography and one of the magic of film photography is double exposure,” says Cheung. “It all comes down to my own feelings and my own impressions of Hong Kong.”

Cheung’s work brings to mind Kevin Mak, another Instagrammer known for his photos of urban space. But unlike Mak, who works as an architect, Cheung has no background in design, architecture or urban planning. Until recently, he worked as a researcher for the government’s Education Bureau. His interest in Hong Kong is rooted simply in a curiosity for the city around him. 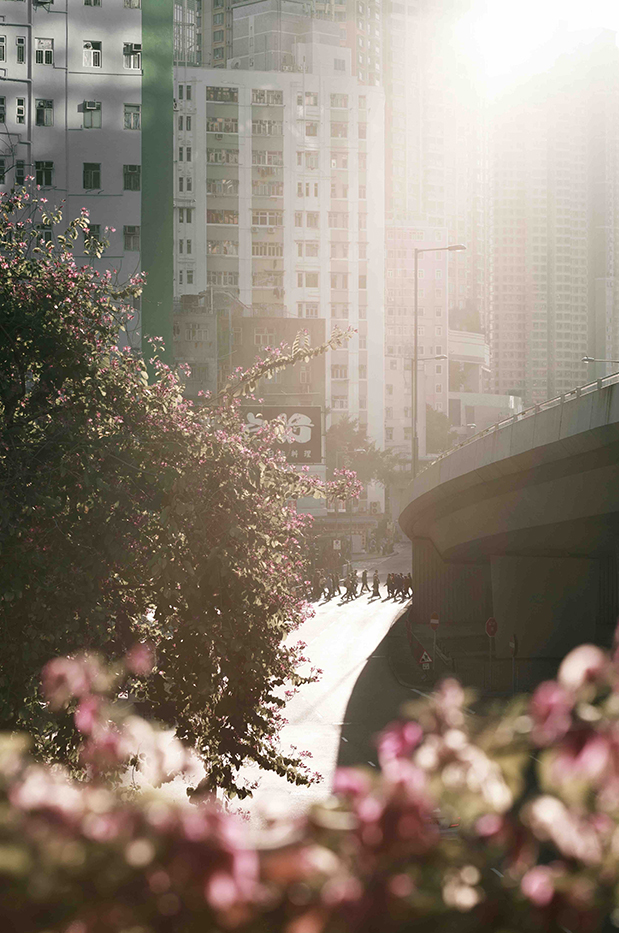 Photography has expanded that interest. Around four years ago, Cheung wanted to see the sunrise from Tai Mo Shan, Hong Kong’s tallest peak. “In the spring, if you are lucky, the sun will rise above a sea of clouds,” he says. He kept returning until he encountered those perfect conditions – “maybe more than 15 times,” he says. Along the way, he realised he liked hiking, and became fascinated by the contrast between Hong Kong’s natural and built environments. Some of his double exposure photos play with the sharpness of that division. Cheung is currently working on a series that will layer flowers on the city’s buildings. “I took about 25 photos at the flower show [in Victoria Park], but it’s not ready yet,” he says. He has plenty of time, though. Thanks to his work on Instagram, Cheung now dedicates all his time to his craft, supporting his creative work with commercial photography. It’s a long way from those early Instagram days. “We always need to evolve, so that the oil will not run dry,” he says. Visit @rambler15 for more of his work.

When Jeremy Cheung began using Instagram, it gave him a new perspective on what he found interesting about Hong Kong.