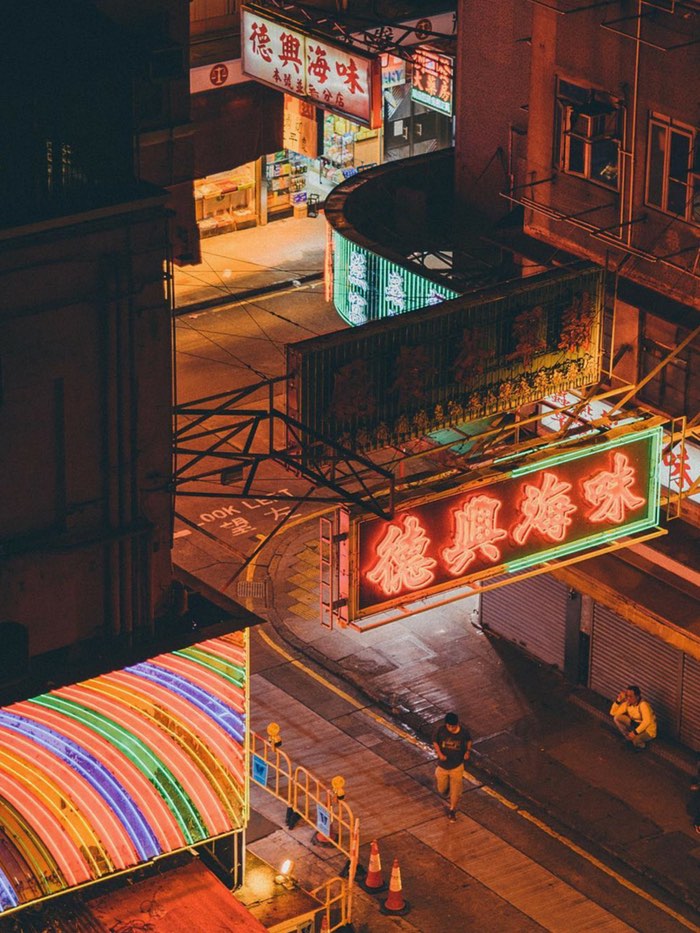 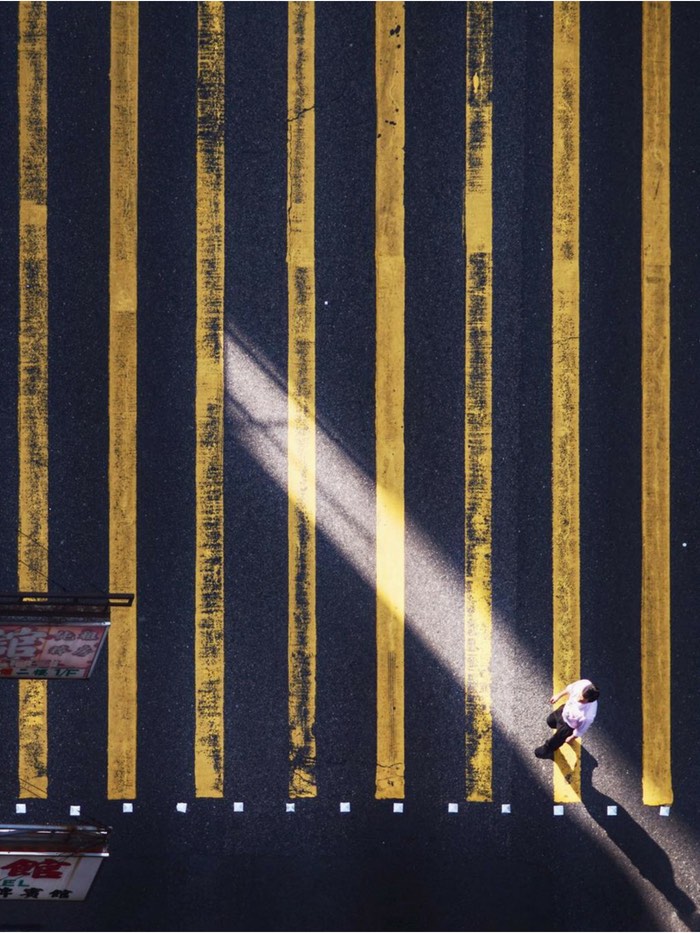 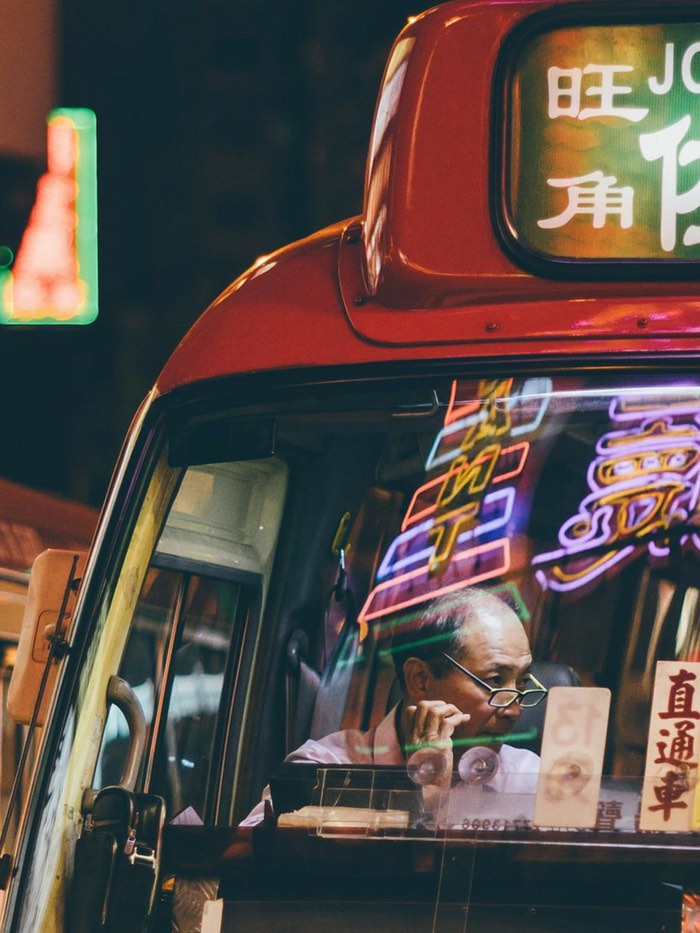 Long before Sunny Liu took photographs, what he liked to do was draw. He began sketching pencil portraits while growing up in Sha Tin, but it was a hobby he had to relinquish when the pressures of adulthood took hold. Now a 27-year-old electronic engineer working in a hospital not far from his home, where he lives as he always has done with his parents, Liu has swapped his pencils and sketchbooks for a compact camera, which he takes with him everywhere he goes and uses to capture moments that feel special and unique. 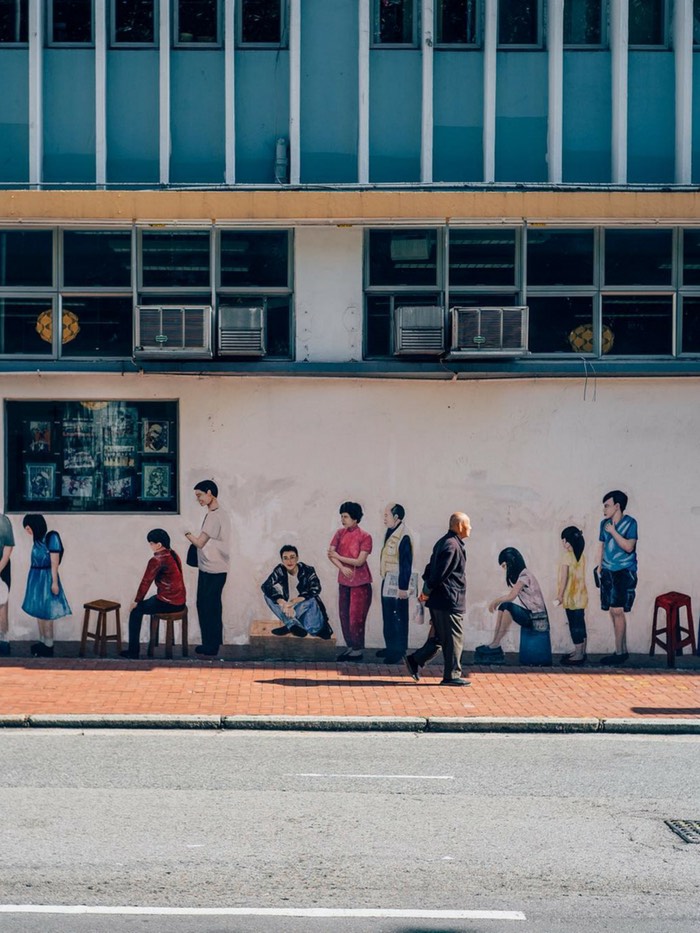 “I like drawing because you can draw anything at all, and that’s not the same with photography,” says Liu over a beer in Kowloon, on a slow, sun-soaked Sunday afternoon. “But taking a photograph is obviously a lot faster.”

Sunny has his trusty backpack propped up next to him, which is where he keeps his compact RX100, ready for any moment worth shooting that arises as he goes about his weekend errands. Though he sometimes works with models, he likes to shoot unwitting strangers most of all, because the unexpected scenes that come out of watching people going through the motions and natural rhythms of daily street life are what lend a snapshot its unique magic. 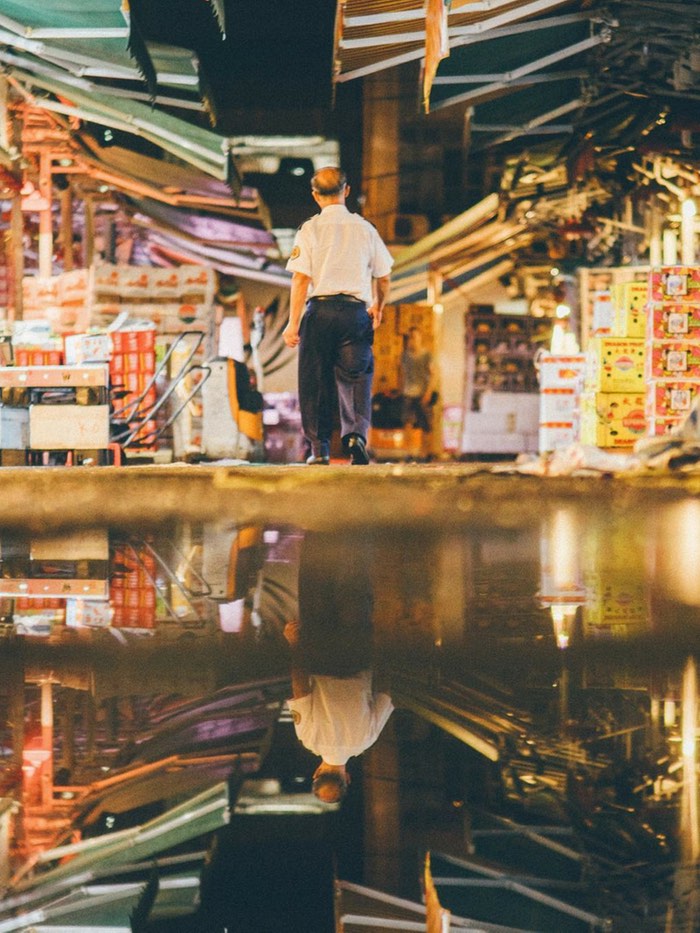 “I like the uniqueness of every moment; it’s not something that you can take again. And it’s not done with expensive tools, it’s about how you spend time on the street,” he says. Sometimes his hobby becomes a point of obsession, as Liu devotes entire weekends to exploring his city, camera in hand. But it’s a fixation that is paying off. Liu’s enthusiasm has not only accrued him respect in Hong Kong’s world of Instagram photography, but it has also led to paid work, with clients including the Hong Kong Tourism Board and HSBC. 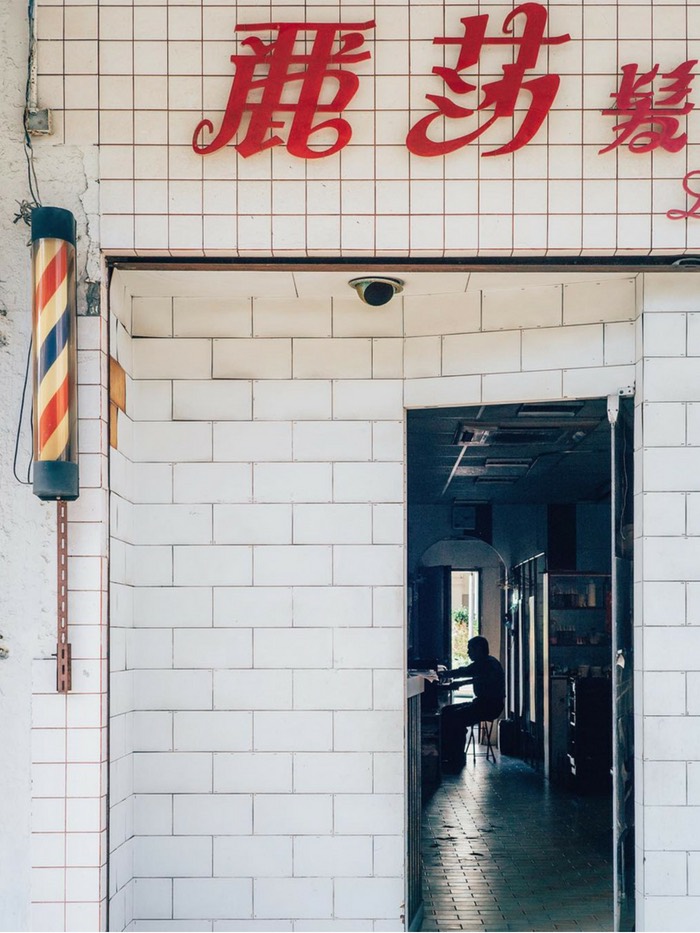 Liu first started taking photos with his iPhone in 2012, which quickly led him to invest in a real camera. Always interested in Hong Kong’s landscapes, both urban and natural, Liu began uploading images onto Instagram, accruing a growing base of fans who appreciated his eye for elegant and poignant scenes that prolong otherwise fleeting moments of Hong Kong life. 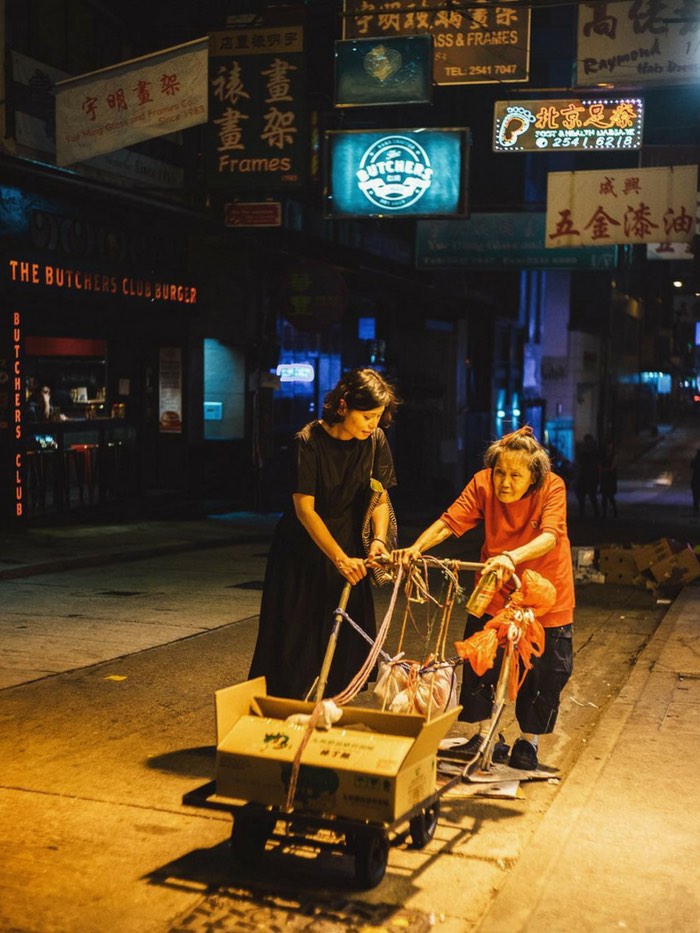 Liu’s images elevate scenes that one might consider banal into the realm of the poetic. It’s a quality that might come from the way a sliver of sunlight shines on a dilapidated building, or how the shadow of a solitary figure is stretched out in the evening sunlight. Somethings what draws Liu to a scene is something more emotional and human; one of his favourite images depicts one women helping another move her pushcart one late evening in Central. For Liu, the image shines a light on something he would like to see more of in Hong Kong: strangers helping each other. 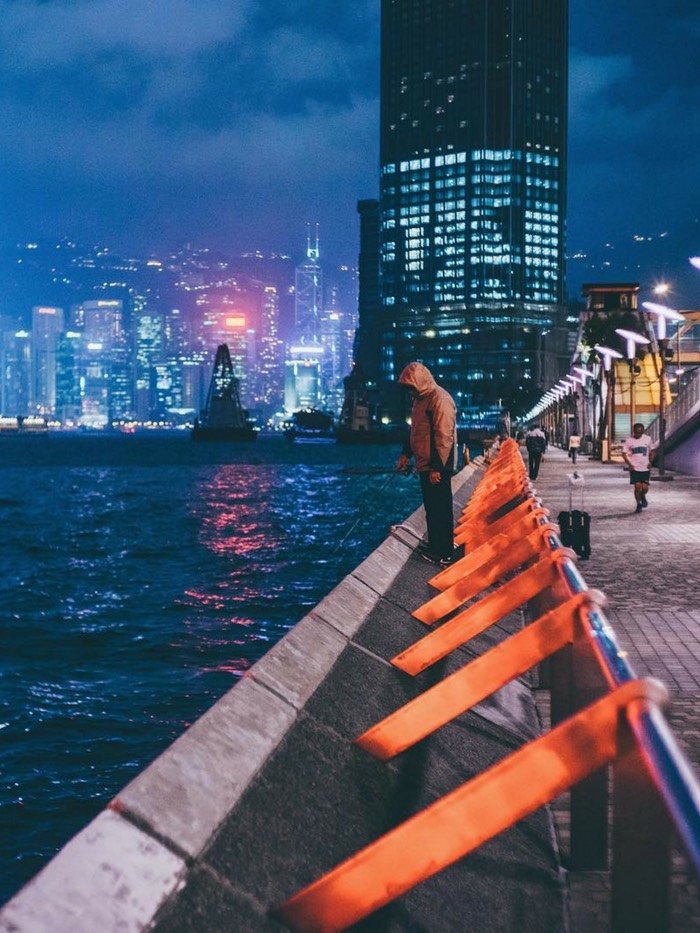 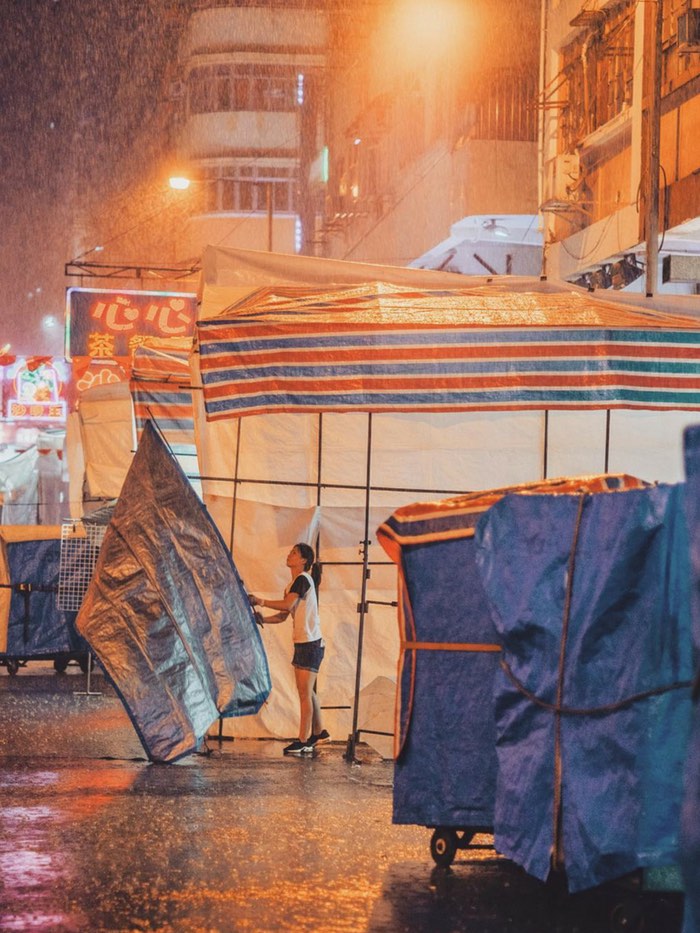 Liu often snaps children and people playing or smiling, sometimes in less than ideal circumstances. One of his favourite images was that of a young girl grinning in the midst of a road flooded by a typhoon. Liu likes the idea of illuminating moments in which we as humans can exhibit joyfulness despite trying conditions. This human element of Liu’s photography is in part inspired by the photography of the late Fan Ho, whose work Liu often references in the scenes he chooses to depict. 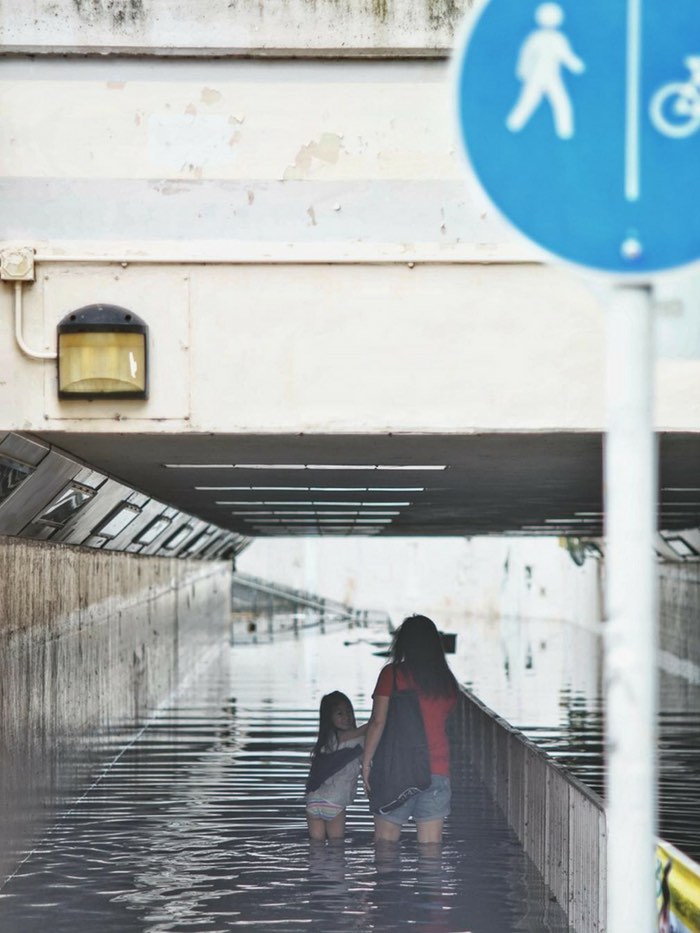 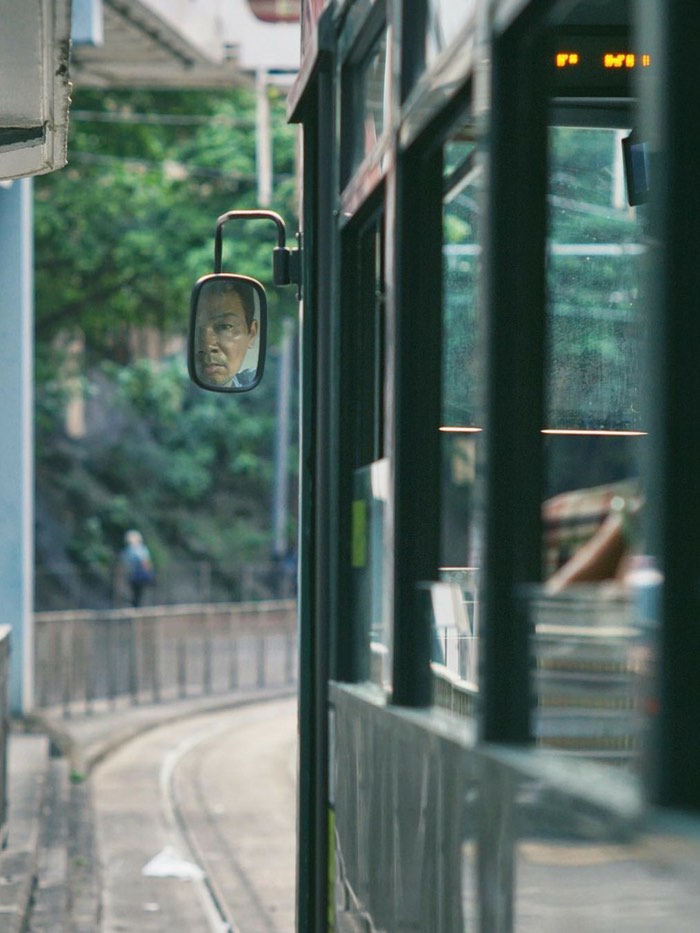 Ho was as much known for his empathetic depictions of grassroots city life as he was his elegant and poetic compositions – qualities Liu admires and takes reference from. “I like the photography of Fan Ho, his use of shadows, I like the symmetry and minimalism,” says Liu. “It’s difficult to shoot that aesthetic in Hong Kong, because the city is so crowded, and that’s not what I want to capture.” he says. Like Ho, Liu is drawn to the rare sight of a Hong Kong street empty but for one solitary figure. 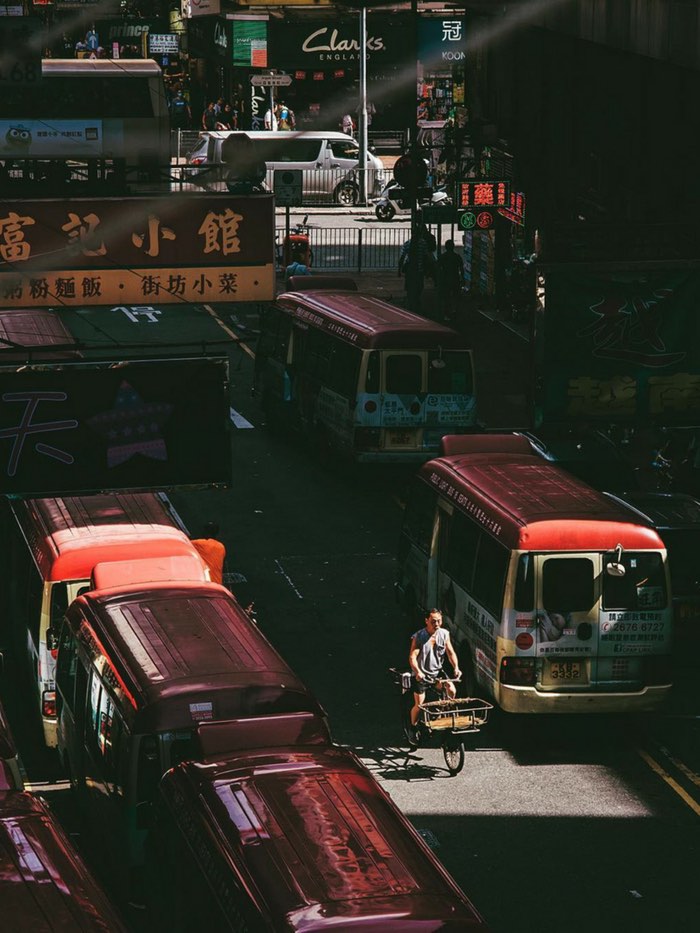 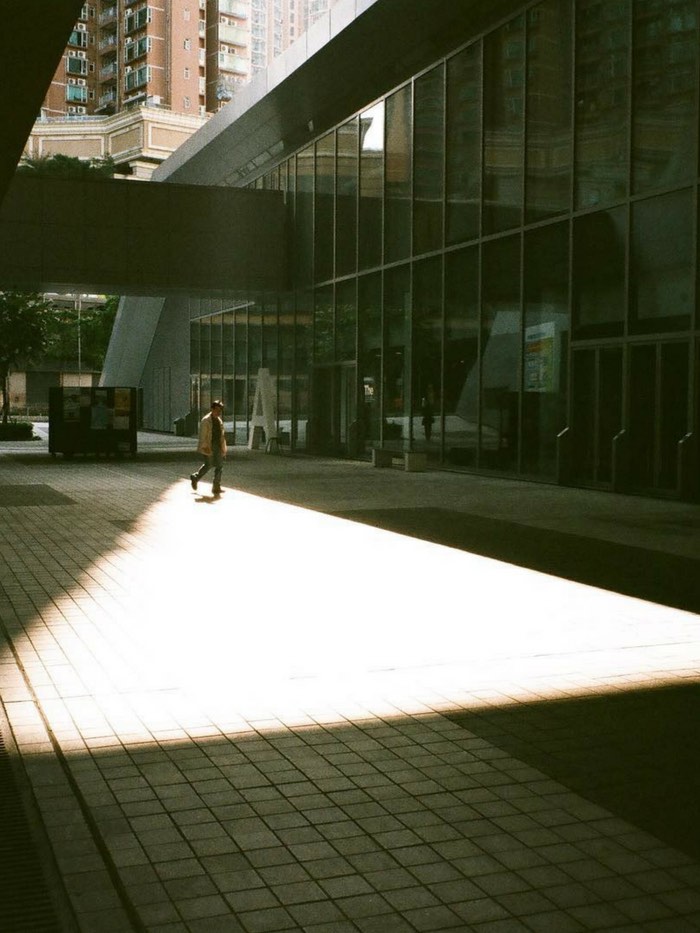 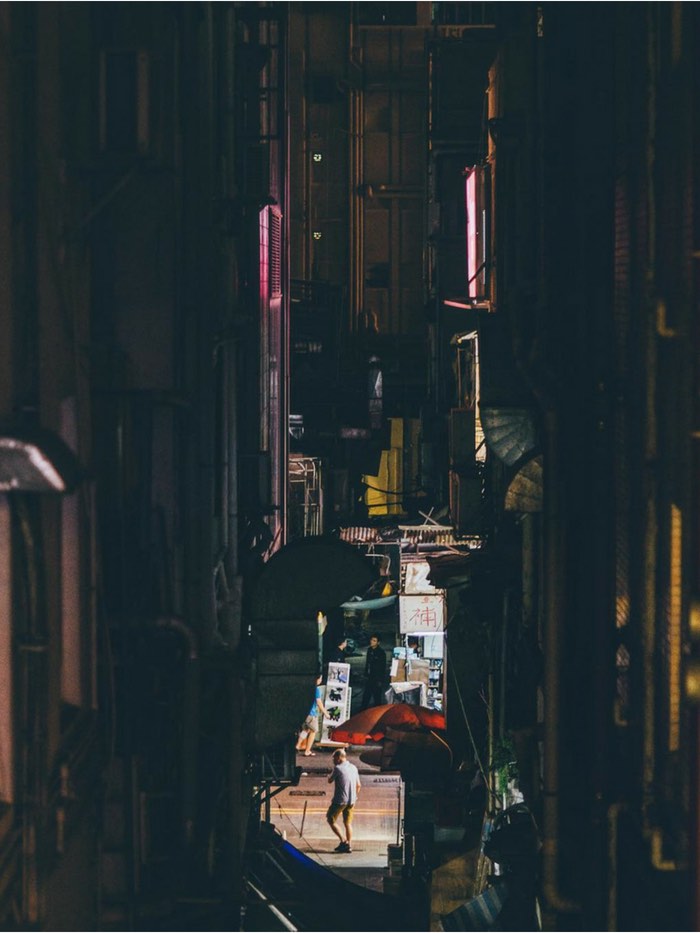 Compared to Ho’s heyday in the 1950s, Hong Kong’s buildings now soar higher and higher. Liu sometimes climbs up to rooftops to take bird’s eye views of the city. The city’s futuristic cyberpunk quality — something that has inspired everything from Blade Runner to Ghost in the Shell – is another one of Liu’s fascinations. Like many photographers working in Hong Kong today, he is drawn to the disappearing tradition of the city’s neon lights.

Liu expresses a sense of ambivalence about the changes the city is going though; he regrets what is being lost in a time of upheaval. Perhaps this is why photography has becoming such a meaningful endeavour to him: it allows him to create time capsules with which to treasure those disappearing moments.

Visit @sunny_liu on Instagram for more of his work