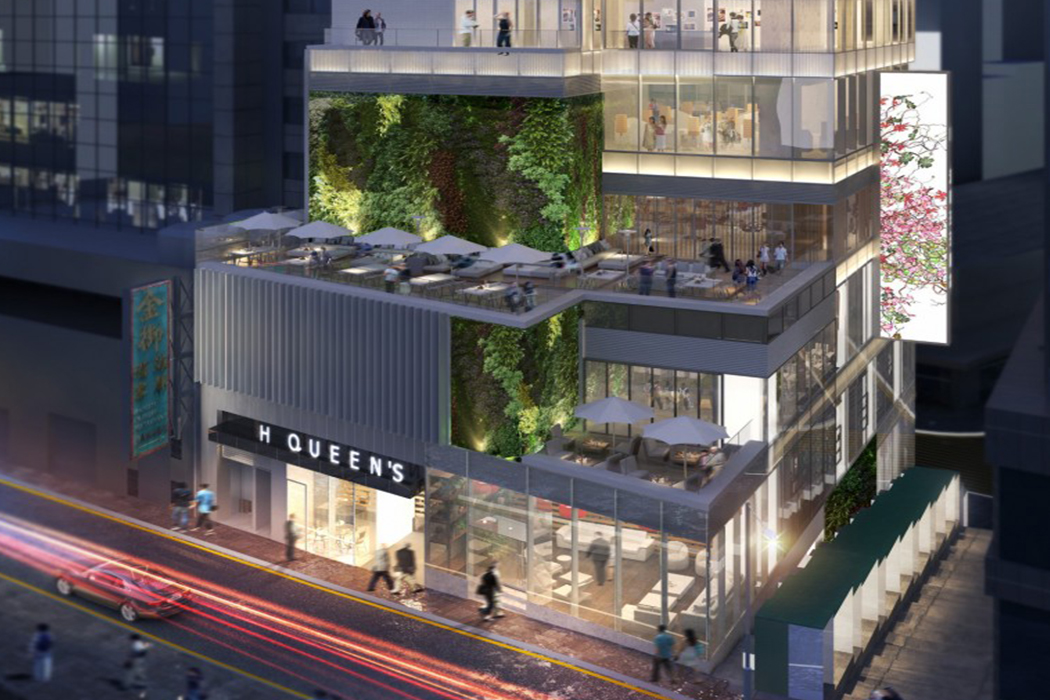 Sitting on the third floor terrace of a Central restaurant, architect William Lim looks up at a 24-storey building that has recently risen across Pottinger STreet. “This time last year it was still a hole in the ground,” he says. “It’s gone up quickly.”

The building is one of Lim’s own: H Queen’s, the first tower in Hong Kong designed specifically for art galleries. “It’s very rare anywhere in the world to have a vertical art building,” in Lim. When it opens later this year on Pottinger Street, in between Stanley Street, Queen’s Road, the tower will offer 15-foot ceilings and 5,000 square feet of unobstructed space on each floor. “It’s almost impossible to find spaces like that in Central,” says Lim. In London and New York, many high-end galleries commission their own buildings, like the David Zwirner Gallery in New York, whose austere 30,000 square foot space, designed by Selldorf Architects, rises five storeys above West 20th Street. That wouldn’t be possible with Hong Kong’s sky-high land prices. “A tower is the only solution, says Lim.

The building will also include several floors of restaurant and bar space. “From here you can see the various terraces and the balconies higher up,” says Lim, gesturing upwards. “Those will be used mainly for F&B [food and beverage].”

H Queen’s is a testament to just how lucrative art has become in Hong Kong. In terms of auction sales, Hong Kong is now the third largest art market in the world, after London and New York, and the arrival of Art Basel in 2012 brought a slew of prominent international galleries in its wake.

Those galleries have often struggled to find space that meets their standards. One of the first places in Central to fill up with galleries was the Pedder Building, which was built in 1923 with 13-foot ceilings. Others have sought refuge in anonymous office blocks. Still more have avoided the high rents of Central entirely and set up shop in industrial districts like Wong Chuk Hang.

But each of those spaces has its drawbacks. Office towers can’t handle heavy floor loads, which rules out large sculptures and installations, while many buildings have tiny lifts that make it difficult to transport artwork. Lim says H Queen’s will have especially sturdy floors and “massive openable windows” that can allow large artworks to be deposited straight into the gallery. “There is a custom roof crane, so we can not only lift it to a floor, we can slide it right into the gallery,” he says.

Handling art is something Lim knows well. In addition to running CL3 Design, Lim is an artist and art collector in his own right. “I have spent almost every Saturday afternoon in the last ten years walking up and down Hollywood Road, seeing which gallery spaces work and which don’t,” he says. He particularly dislikes galleries hidden inside office buildings. In fact, an office building is what H Queen’s may have been if it weren’t for Lim. When developer Henderson Land hired him for the project, they were planning to build an office tower, but when Lim pointed out the need for gallery space, they changed their plans.

Lim says the integration of restaurants, retail and art galleries inside the building is partly inspired by large industrial buildings filled with galleries and businesses, where people take the lift to the top floor and walk down, visiting spaces on each floor. “We’re designing one of the escape stairs to be a nice art stairway,” he says. He isn’t sure yet whether building codes will allow it to be used as an exhibition space, like the AO Vertical art space in Chai Wan, but he plans to commission a graphic artist to decorate it nonetheless. “We are shortlisting and talking to a few artists,” he says.

A rendering of one of the building’s future galleries. Image courtesy Henderson Land.

The galleries will start their fitting out work in July or August, and some have already hired prominent international architects to design their interior space – though Lim can’t name any names just yet. The large, clear windows will make it possible to see each gallery’s interior from the street, giving the building a translucent quality during the day. At night, lights embedded inside the windows will make it glow like a lantern – or a “glass jewel box,” as Lim describes it. Two LED signs will project from the building’s façade, evoking the neon signs that are quickly disappearing from Hong Kong’s landscape. “It’s nice to add these very Hong Kong elements to the project,” says Lim.

He takes a bite of mango and prawn salad and glances over at the building. “We have public projects going on like M+, but these private sector projects are also important to build up the arts climate,” he says. “Hopefully you’ll see art being a lot closer to people.”

Architect William Lim has drawn from his experience as an artist and art collector to design a new tower dedicated to art.