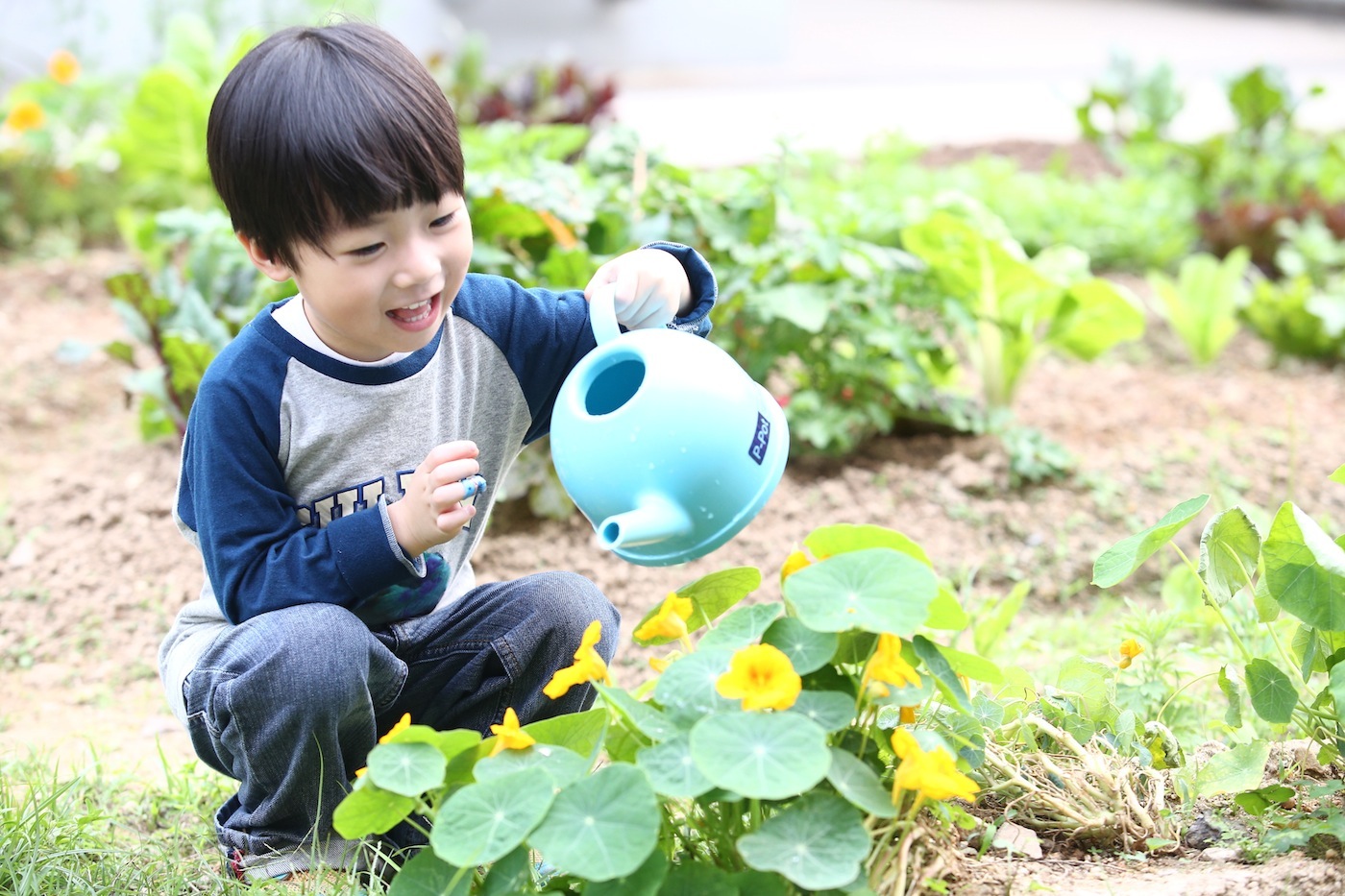 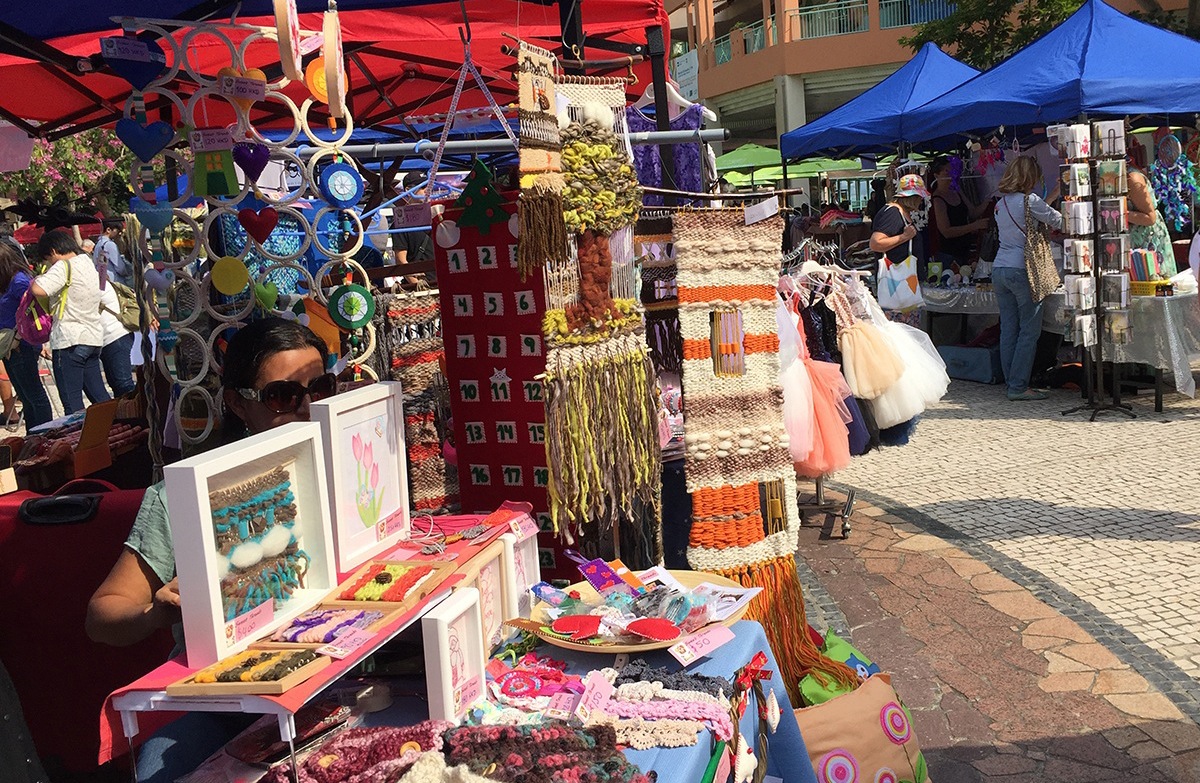 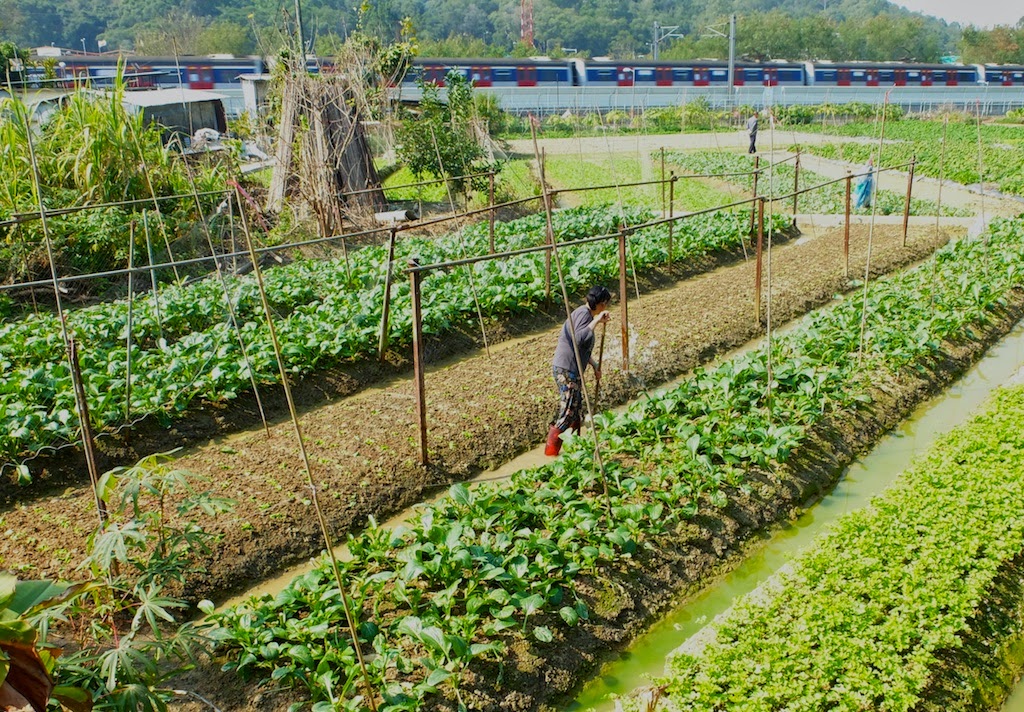 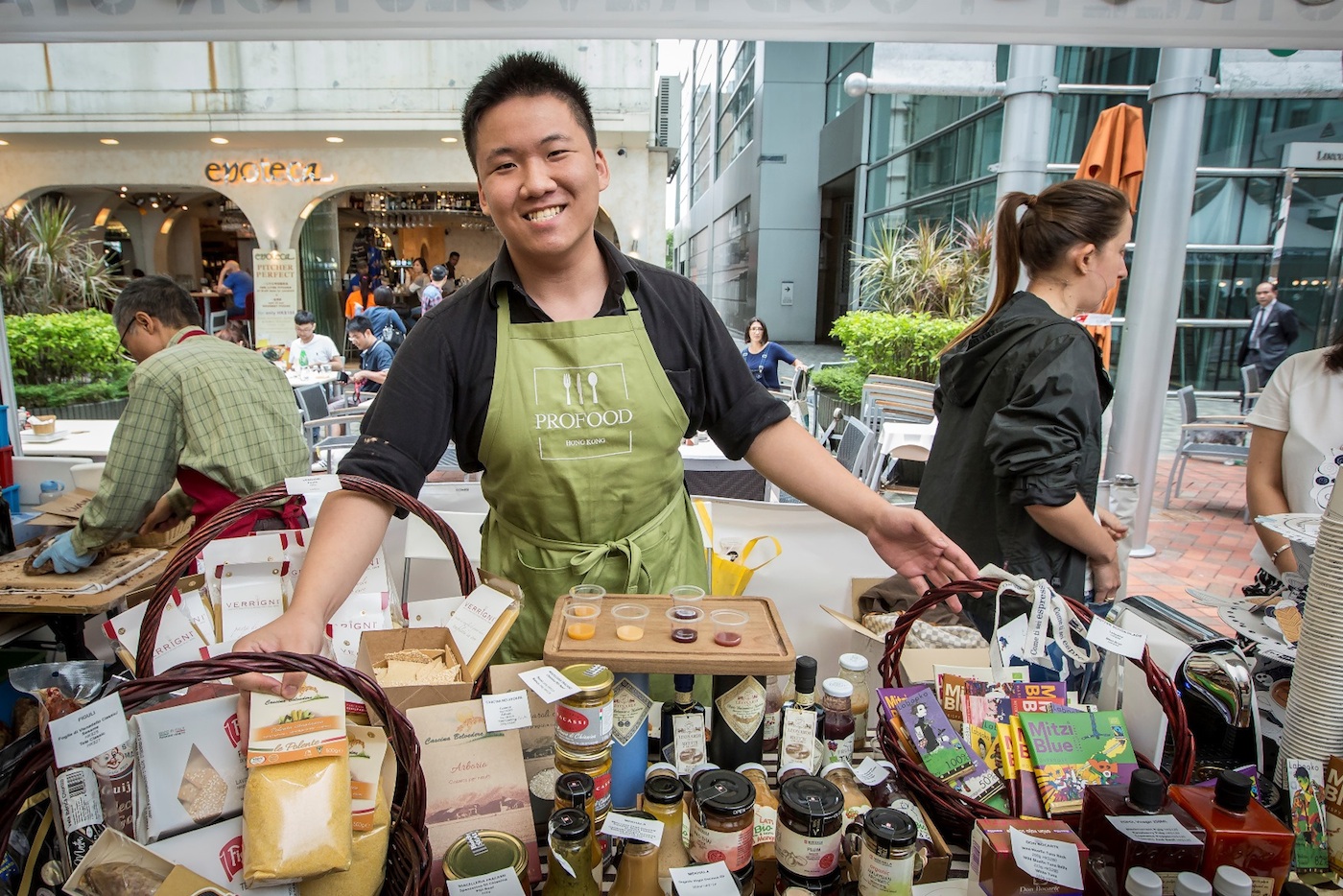 Farming conjures images of bucolic pastures, fresh harvests and a rugged lifestyle, and while you pound the pavements of the ultramodern metropolis that is Hong Kong, it’s hard to imagine that agriculture plays any part. Yet merely an hour by train from Central, you can step out of Kam Sheung Road Station, a sleek MTR stop in the New Territories, and find yourself on the fringes of Kam Tin, Hong Kong’s “farm belt.” Here—quietly, slowly—a farming revolution is taking place.

Hong Kong currently imports over 90% of the food it consumes, and if we look at vegetables alone, that number jumps to a shocking 98%. It wasn’t always this way. Until the 1950s, Hong Kong farms provided the city with much of its rice, vegetables and livestock, but the boom of manufacturing – in the textiles and plastics industries for which the city was so well known, for instance – took most farmers or would-be farmers from agricultural families off their land and whisked them into factories.

A small number of farms continued to exist, and you could find the occasional basket of leafy greens in the wet market donning a “新界” (san1 gaai3, New Territories) sign. There was little incentive to farm – rental rates for land in Hong Kong was ever on the rise, and imports from Mainland China were pushing prices down like never before. In the late 1980s, however, things started to change. A number of environmentally-driven interest groups began farming organically, with environmental sustainability in mind. In 2000, the government’s Agricultural and Fisheries Department (AFCD) got on board, launching an “Organic Farming Conversion Scheme,” but in the true spirit of Hong Kong entrepreneurship, it not through a sense of altruism, but because the government had found that “organic” was way to add value, giving farmers a chance to stand out against mass-market mainland imports.

These days, with food scares coming out of Mainland China on almost a monthly basis, it seems the AFCD was right to support local organic farming. Today, a growing number of Hongkongers have begun to embrace the concept of organic food, seeing it as a safer, cleaner option. But that doesn’t mean they are interested in local food. Ironically, many consumers prefer to buy organic lettuce that arrived on a plane from, say, New Zealand, than the same lettuce grown locally, an hour from their very own door.

There are efforts to change that. Hong Kong now has its own independent organic certification authority, the Hong Kong Organic Resource Centre, with standards developed from an internationally-recognised framework. The city has over 500 certified organic farms, although in any other country, these farms might be better known as gardens, as altogether, organic farmland in Hong Kong amounts to just one square kilometre. Small as it may be, however, the revival of farming has created waves far beyond the agricultural industry, and we’re seeing its effects in retail, politics, art, architecture and the city’s cultural landscape in general.

Many cities have fresh food markets, and Hong Kong is no different, with our neighbourhood wet markets still alive and well-utilised in most districts. Unlike other cities, however, Hong Kong’s markets sell largely imported produce. But with the renaissance of local farming, there’s a new need for farmers’ markets, where farmers sell to consumers directly. Tai Po Farmers’ Market was the first to fill this need when it opened a decade ago; it is still going strong today. Both supply and demand for local produce has grown rapidly through the years, and there are now several farmers’ markets around town, including one I started in Taikoo Place, Quarry Bay, to bring city-dwellers a much-needed taste of local farm freshness.

On my travels, I have always loved going to markets to experience and understand local life, and often I would see food entrepreneurs, young and old, offering a wide range of provisions; their love of food the common denominator. I felt that Hong Kong needed something like this, to champion homegrown produce and talent – as a food writer, I’ve gotten to know many of them – so the idea for Tong Chong Street Market was born. (I had previously worked with the market’s co-presenters, Swire Properties Taikoo Place, on another project, which is how we got to know each other.) Taikoo Place is primarily a commercial district, so on Sundays, the area tends to be fairly quiet. Swire was keen to host a market that brings traffic to the area at a time when it’s usually empty.

The farmers’ market movement has now extended beyond produce, and seems to have inspired interest in all things homegrown. There is a boom in arts and crafts markets and other outdoor events – surprising for a city that was, until recently, dead set on building bigger and grander shopping malls. These days, open a listings page in a magazine, and you’ll be spoilt for choice with the number of fairs, markets and pop-ups happening each weekend.

In Discovery Bay, for example, the popular Discovery Bay Sunday Markets by Handmade Hong Kong markets run throughout the year, bringing arts and crafts and other independent entrepreneurial pursuits to the vibrant residential district, and also attracting visitors from further afield, who take the hour-long ferry ride from Central and often make a day trip out of it. Closer to town, several small businesses on Po Tuck Street, near Hong Kong University, occasionally organise Po Tuck Street Market, a street fair where the shops present special offers, and activities like face painting and live music are featured. The Hong Kong Markets Organisation operates a number of pop-up markets around town.

A renewed interest in farming has also led to land use being brought into the spotlight. It’s a typical David and Goliath state of affairs, with the government and property developers making life difficult for farmers who are growing food on land that is slated for future development. When Occupy Central erupted in 2014, launching the Umbrella Movement, artist Emily Wong set up a small urban farm on the protest site in Admiralty. It eventually blossomed into the activist group Farms for Democracy.

“Suddenly, with the traffic gone, the street instantly became the new go-to point,” says Rishi Kukreja, one of the founders of Farms for Democracy. “People no longer saw the street as a means of getting from A to B, but as a place in and of itself worthy of spending time on. Against this backdrop I also viewed the green patches differently, from not just something pleasing to the eye but also a potential space for farming, education and enhanced social cohesion.”

When the occupation of Admiralty ended, the movement continued in the form of advocacy, encouraging Hongkongers to grow edibles wherever they can – balconies, windowsills – as well as conducting research and submitting policy papers to the Legislative Council on matters of agriculture. In Hong Kong’s cultural sphere, local agriculture, with all its social, political and environmental influences, has captured the minds of many creatives. HK Farm, an organisation made up of artist Glenn Eugen Ellingsen, designer Michael Leung and collaborators Anthony Ko and Matthew Edmondson, spearheaded a rooftop farming movement in Hong Kong, and the group have worked on numerous projects that champion experimentation in urban farming. “Local agriculture matters because it’s important that we know where our food comes from and what’s gone in to producing it,” says Ko. “Hong Kong is small enough that you can go direct to farmers and understand their methods – they’ll gladly show you. Unfortunately farmland in Hong Kong is continually diminishing due to redevelopment.”

HK Farm have just completed a year-long residency at Spring Workshop, a cross-disciplinary art space. For the residency, they produced an extensive programme, from seed-bombing events, to planter-building workshops, to conversations with farmers, and distilled the year’s learnings into The HK FARMers’ Almanac, a publication that is now available to all online.

The idea of farming in urban environments inspired many more people, including architects and property managers. The most recent edition of the Bi-City Biennale of Urbanism and Architecture, held at Kowloon Park in Hong Kong and in the Dacheng Flour Factory in Shenzhen, calls upon architects to rethink existing buildings in the face of rapid urbanisation, where natural resources are dwindling and food safety issues are becoming more common. Exhibits like Floating Fields by Thomas Chung, associate professor at the School of Architecture at the Chinese University of Hong Kong, explores the possibility of “reinvigorating post-industrial architecture and public space with a productive edible landscape,” creating aquaponics facilities to farm fish, silkworms, trees and the like in a derelict industrial site in Shenzhen.

Agriculture is even finding a place in new developments like Hysan Place, a shopping mall built by another property developers Hysan Development in the middle of Causeway Bay. When it opened in 2012, the mall invited green charity SEED (Sustainable Ecological Ethical Development Foundation – a non-profit organisation whose mission is to promote sustainable living and Hong Kong’s organic movement) to set up an urban farm on the building’s rooftop. They have planted a range of produce, from beetroot to watermelons, inviting regular city folk, including people who work in the offices of the commercial building upstairs, to farm the plot. Each season, they offer a new series of activities to incite the public’s interest in growing produce in compact city spaces. Their Green Wonders project in 2015 held introductory workshops for children to learn more about farming.

To some, for a real estate developer to encourage farming may seem ironic, but an optimist may see it as a move towards exploring options for cultivating food in dense cosmopolitan environments, where the population shows no sign of shrinking.

Why we like it: Hong Kong’s first local organic farmers’ market, where fruit and vegetable farmers sell direct to consumers, in addition to a small proportion of cottage industry products, like soap and pickles.

Why we like it: Seasonal Sunday market fun for the whole family. It’s a one-stop shop for food lovers looking to taste street food from up-and-coming restaurateurs, as well as to buy produce from local organic farmers and independent small food businesses.

Why we like it: It’s an amusing way to raise awareness about farming and organic gardening in the heart of one of the most crowded commercial parts of the city.

Farming is making a comeback in Hong Kong - not just in countryside plots, but all over the city, and sometimes in ways you don't expect.