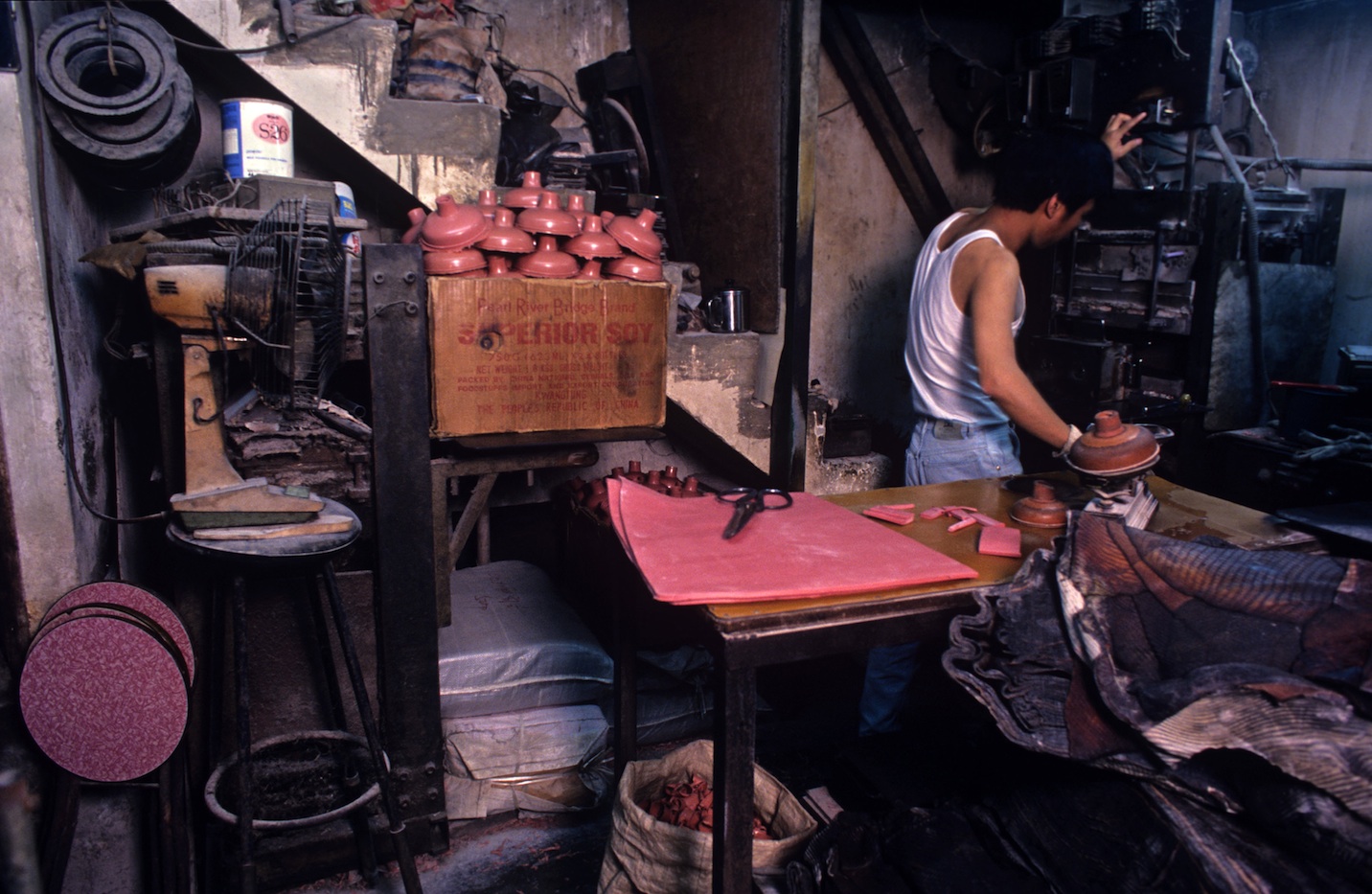 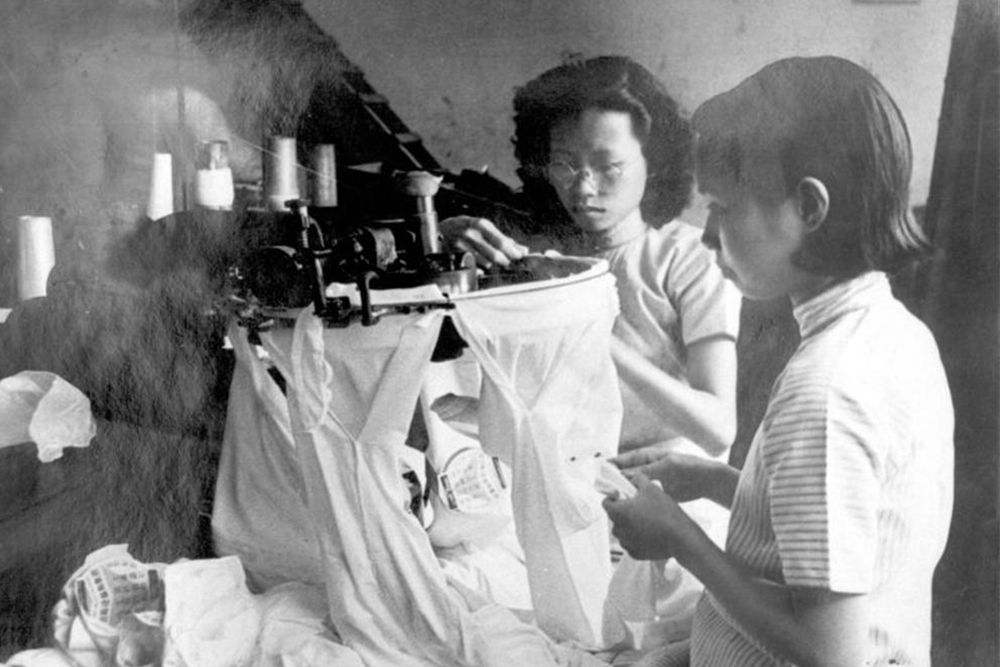 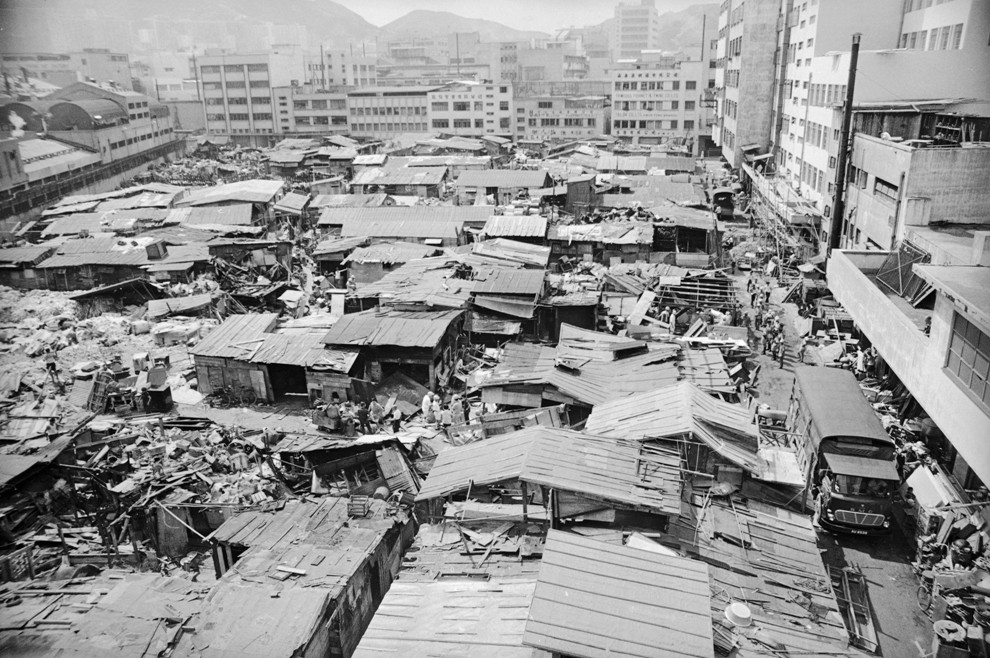 Walking through the concrete canyons of Wong Chuk Hang, To Kwa Wan or Kwun Tong, it’s easy to imagine Hong Kong when it was still an industrial powerhouse. Textile mills churned out fabric that ended up in clothing stores halfway around the world; plastic factories made flowers, toys and lampshades that were stamped with that ubiquitous phrase of the 1960s and 70s: “Made in Hong Kong.”

But those old industrial districts were only part of the picture. The seeds of Hong Kong’s industrial growth were planted in the shantytowns that covered the city’s hills after World War II, when millions of mainland Chinese refugees poured into the British colony, fleeing the devastation of Japanese occupation and the ongoing civil war between Communists and Nationalists. These squatter villages were not just places to live, they were engines of economic growth.

“Squatter factories provide important, even essential, links between different parts of the manufacturing sector,” wrote University of Hong Kong researcher Tsang King-man in a 1985 study. At the time, about 81 percent of the work done by squatter factories was subcontracted from larger industrial enterprise such as tanning and leather finishing, glassblowing, metalworking and shipbuilding. They were the glue that held Hong Kong’s more formal industrial economy together.

In 1978, there were 13,000 squatter factories employing 102,000 people, or 13 percent of the manufacturing labour force. Just under two thirds of those workers lived close to the factories where they worked. Just as Hong Kong’s shantytowns were a natural response to the flood of refugees, the factories they contained were a way to keep people busy. In 1961, according to census figures compiled by researcher Sheila Johnson, people living in Hong Kong’s squatter villages had an unemployment rate of just 1.43 percent.

What those numbers don’t tell is how work and daily life were intertwined. These were not necessarily full-time jobs, or conventional shift work like you’d expect at a regular factory. Women embroidered plastic flowers in their living rooms; a few sewing machines turned a home into a garment workshop. 35 percent of the squatter areas on Hong Kong Island were dedicated to economic activities such as factories and farms. People were living cheek by jowl with livestock and noxious industry. It wasn’t comfortable — or sanitary, for that matter — but people made do.

In his memoir Diamond Hill: Memories of Growing Up in a Hong Kong Squatter Village, retired pathologist Feng Chi-shun recalls growing up next to tiny vegetable farms, a rice wine distillery and workshops that produced cookware, batteries, Buddhist religious paraphernalia and straw hats. The Kowloon Walled City — the most epic squatter settlement of all — contained factories making everything from fishballs to rubber plungers, along with textile mills and metalworking shops. 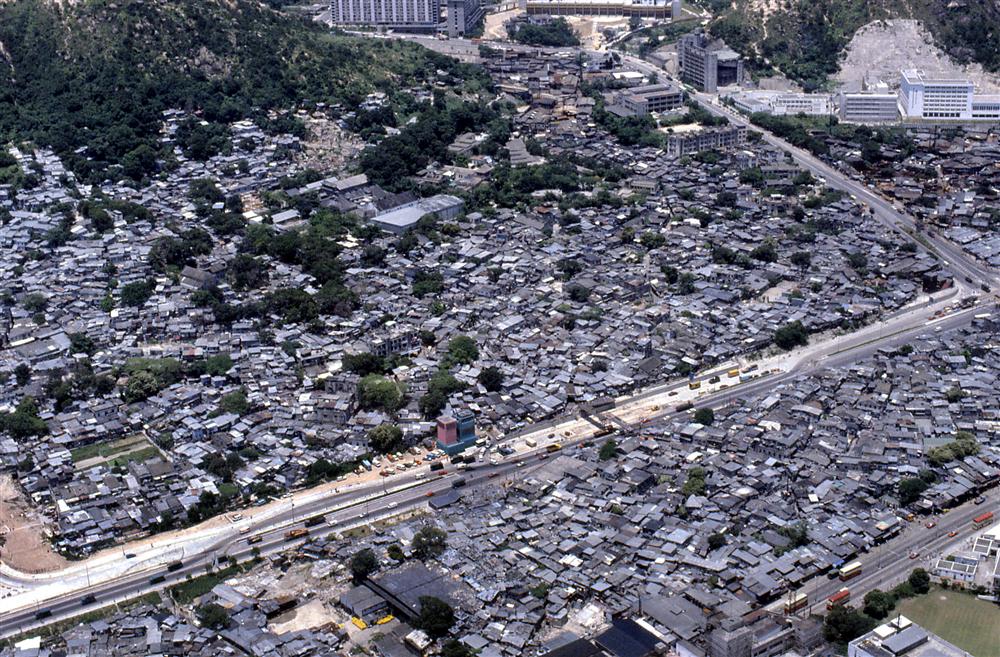 The Diamond Hill squatter area, home to many small factories, seen from above in 1983. Photo courtesy Ko Tim-keung

Some industries were based primarily in squatter areas because they were specifically banned from the big multi-storey buildings of Hong Kong’s formal industrial areas. Tsang King-man gives the example of “bleaching and dyeing, tanneries and leather finishing, shipbuilding and repairing boatyards, and some of the food industries.” The lower portion of the Diamond Hill squatter area was particularly propitious to industry. Before it was demolished in the late 1990s, it was home to metalworking and machine repair shops, furniture workshops, dyeing factories and plastic-making operations.

Other squatter industries benefited from the low cost of illicit real estate and the relative abundance of ground-floor space. A number of Hong Kong’s film studios were located in squatter areas. Tam Pui-lin, who sells wedding supplies in the Yau Ma Tei Market, remembers visiting one such studio as a teenager. “When the market stalls closed I went with my friends to the Kwok Ka Film Studio in the Kowloon Walled City to watch movies being made,” she says. “I knew the staff so they let us in.”

Rubber factory in the Kowloon Walled City, the most epic squatter settlement of all, 1989 – Photo courtesy Greg Girard

Squatter industries were not limited to shantytowns. Sometimes they were hidden inside the shophouses and residential buildings of neighbourhoods like Sham Shui Po, whose garment industry relied heavily on these types of illicit factories.

“A typical squatter factory consisted of a team of husband and wife working at home with a few workers and several sewing machines,” says Au Kwan-cheung, who grew up in a squatter factory ran by his parents. Some of these factories made garments that were exported overseas, but most supplied local clothing shops. “To replenish best-selling fashion items that ran out of stock, retailers would sometimes visit garment factories in person, waited by the side of the garment workers and pick the products as soon as they were finished,” says Au.

These types of small factories were also called cottage industries, a term that reflected their makeshift style of operations. Some of them eventually grew into much larger companies. In 1956, Tai Ping Carpets got its start as a squatter factory in Tai Po; it is now a multinational company that is publicly traded on the Hong Kong stock exchange.

Others remained decidedly homespun. In his 2014 thesis at the University of Hong Kong, researcher Sam Ho recalled how his family made plastic boxes in their public housing flat in San Po Kong. His parents bought plastic pellets, melted them down and moulded them into containers that were sold to dried seafood shops. “As we lived at the end of the corridor, it seemed to me, as a child, a very long distance from the flat to the lift,” he recalls. “To save us from carrying the packaged bundles of plastic boxes all the way along the long corridor, mother, sister, younger brother and I stationed ourselves along the corridor length, and passed the goods from one to another like a relay race.” The family’s business grew until neighbours could no longer bear the noise. It moved into an industrial building in 1980.

Noise was the least of the problems for most squatter factories. Although they were an important source of local employment, and a vital link between different Hong Kong industries, these informal industrial operations had a disastrous environmental impact. One of the reasons the Kai Tak River became a fetid open sewer was because of all the industrial activity in the squatter villages upstream.

From the 1970s onwards, most squatter factories were cleared away along with the villages they called home. The shift of manufacturing activities to mainland China in the 1990s took care of the factories that had implanted themselves in residential buildings; the Ho family’s plastic box factory eventually closed in 2000, unable to compete with mainland rivals.

And yet a small number of squatter industries have managed to hang on. In A Kung Nam, one of the last squatter villages left on Hong Kong, automobile mechanics  ply their trade in tin-roof shacks. Up the hill in Chai Wan, a row of stonemasons serve the nearby cemeteries. Recycling piles up outside the squatter village of Cha Kwo Ling, waiting to be sorted, a reminder of Hong Kong’s not-so-distant industrial past.

Hong Kong became an industrial powerhouse thanks in part to informal factories run out of shantytowns and residential flats.