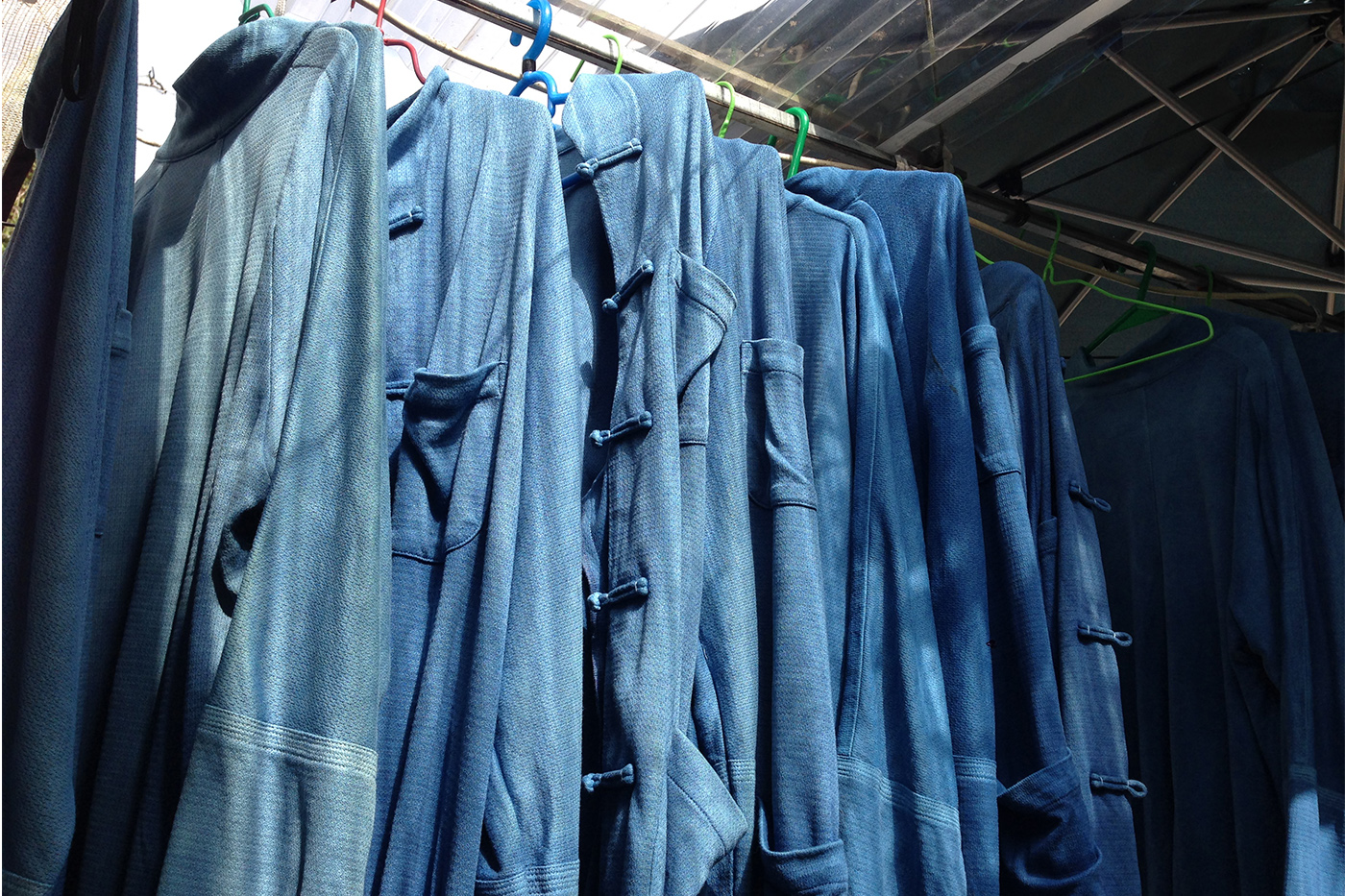 When Gloria Wong wanted to learn about indigo dyeing, the graphic designer ventured out to the north shore of Lantau Island, where a group called Indigo 11.50 has converted an old village house in an indigo studio.

“I love the colour and the natural dyeing method, and I wanted to know more,” she says. What she didn’t realise is that indigo dyeing has a long but little-known history in Hong Kong. Indigo is a brilliant, beguiling shade of dark blue, and it comes from a dye derived from the leaves of several plants in the Indigofera family, including Indigofera tinctoria, which is commonly known as true indigo. The plant is found throughout Asia, as well as in Africa and South America, but it is impossible to trace its exact origin because people have been using it to make dyes for up to 6,000 years. Hong Kong’s indigo industry dates back to Hakka settlers who came here after the Great Clearance of 1661, when the newly-established Qing Dynasty evicted all inhabitants of Xin’an County’s coastal areas in order to weed out rebels loyal to the fallen Ming Dynasty. Many Hakka communities have a long tradition of weaving, and for centuries, itinerant Hakka weavers travelled from village to village, taking raw materials and turning them into fabric.

That was true in Nga Tsin Wai, a walled village that has stood for more than 700 years on the banks of what is now known as the Kai Tak River. In 1968, the Journal of the Royal Asiatic Society Hong Kong Branch quoted an unnamed villager born in 1885: “Most families grew hemp when I was young,” he said. “Every year, about the 10th to the 12th moons, some Hakka people came round the village. They would rent an empty house and stay as long as there was work for them.” The weavers made fabric known as daai6 min4 bou3 (大棉布, “big cotton cloth”) which the villager said was “very hard-wearing, lasting for several tens of years.”

But they didn’t just weave; they also dyed. Hakka villagers grew indigo on the slopes of Tai Mo Shan. In her 1984 book Hong Kong Country Parks, Stella Thrower notes that the flat valley lands below the mountain were terraced for rice cultivation, while the steeper slopes were terraced for tea and indigo. “The indigo grown by the villagers was used to dye cloth,” she reported. “The plants were pulled up and soaked in water for a week to extract the dye and, in some old villages, the stone vats may still be found along the nearby streams.” Creating dye from indigo plants was not a straightforward procedure. First, the plants are fermented in a tub with quicklime—another historic Hong Kong product—in order to create a thick blue paste. After the paste hardens, it is cut into small pieces that can be ground into a powder as needed. It takes more than 400 kilograms of leaves to produce just one kilo of dye. Perhaps for that reason, local production of indigo dye was a mostly artisanal industry, and it seems to have died out in the 19th century as imports from Japan and India became more readily available. As Thrower noted in 1984, the old Hakka villages on Tai Mo Shan are “now abandoned and lost under encroaching vegetation,” their tea and indigo terraces long ago overgrown. During Hong Kong’s postwar industrial boom, some indigo dyeing factories operated in places like Kwai Chung, but even that industry has now died out.

Except on Lantau. Five years ago, Max To was working as a cameraman when he began suffering from lower back pain. He took a long break in Taiwan, where he came across a traditional indigo dyeing workshop. That inspired him to return to Hong Kong, where he and three friends turned his family’s abandoned ancestral home into something similar.

Indigo 11.50 started as a passion project, but in recent years it has expanded more than To ever intended. It now collaborates with Hong Kong fashion brands like G.O.D. and Loom. And it recently expanded their operation to include Rest Coffee Gin, an indigo-themed café in the newly opened West Kowloon Art Park whose interior—from seat cushions to staff uniforms—is filled with fabric dyed at the Lantau workshop.

All of it flows back to a laboriously handmade process in the Lantau workshop. To grows his own indigo plants and uses only natural fabric in his workshops. First, the fabric is tied and knotted to create a decorative pattern. Then it is rinsed in water and dipped several times in a vat filled with dye. Finally, it is rinsed again and left to dry in the sun.

When Gloria Wong took part in the workshop, what she remembers most is being able to leave her own imprint on the scarf she made. “The most playful part is the creativity of how to create your own pattern on the cloth – the results are unexpected and amazing,” she says. She has been wanting to return ever since she finished the workshop.

To says that’s exactly the reason he was drawn to indigo in the first place. “Indigo dyeing for me is a medium of craftsmanship,” says To. He enjoys the sometimes unexpected outcomes it produces, but he especially likes the way it brings people together. It’s a social experience as much as it is a productive one. “The indigo dyeing process itself is not enjoyable at all,” he remarks. “It is kind of like farming, including many tough workloads.”

It’s a process that mimics what must have happened in other Hong Kong villages many years ago. And for To, that’s exactly the point: it’s a way to get back to a more straightforward life – and a way of doing things more rooted in the past.

Indigo dyeing is making a comeback decades after the artisanal industry died out.