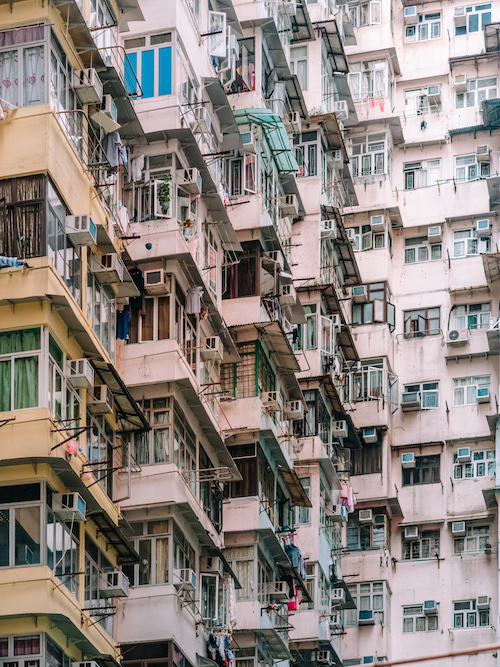 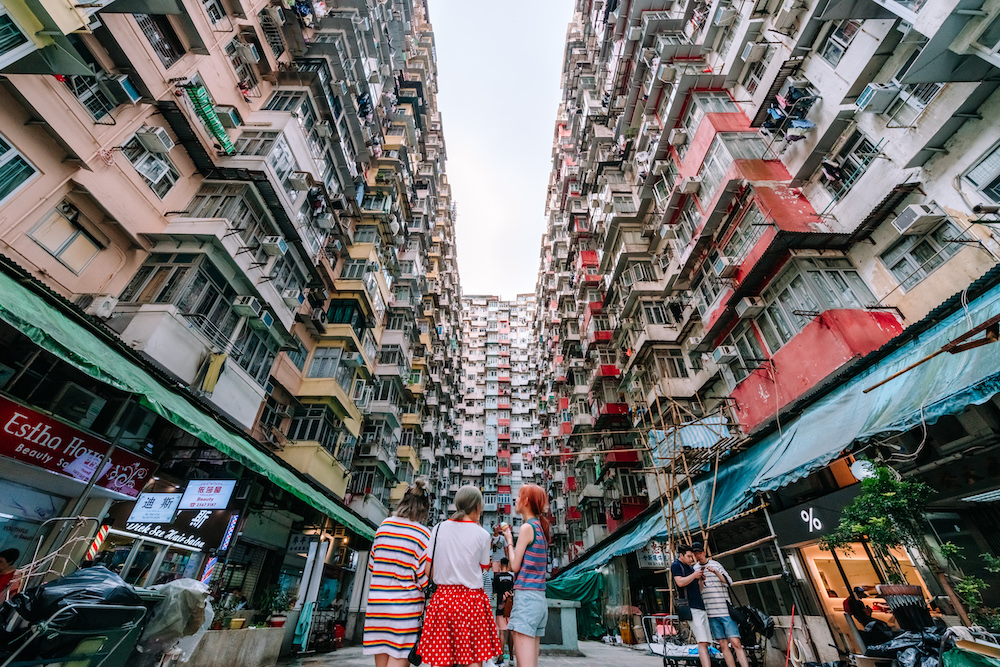 It’s easy to see how the Monster Building got its nickname. Located where King’s Road curves around the base of Mount Parker, this 19-storey goliath dominates an entire city block. Its façade is pockmarked by air conditioners, drying laundry and corrugated metal awnings, but when the evening sun hits it from the west, casting it in a soft umber glow, it looks beautiful in its own monstrous way.

There’s nothing official about the moniker, although it is common enough that when local coffee chain % Arabica opened a new shop in one of the building’s two courtyards, it referred to it as its “Monster Mansion location.” The name seems to have emerged after the building was featured in two Hollywood blockbusters, Transformers: Age of Extinction and Ghost in the Shell, which turned it into a social media destination like Choi Hung Estate, the Instagram Wall and the Instagram Pier.

When it was built, however, the Monster Building had a very different, more unassuming name: Parker Estate. And its goal was not to become a tourist attraction or landmark, but to provide affordable housing to an upwardly mobile generation of Hongkongers.

The building actually consists of five separate blocks linked together by a ground-floor shopping arcade – the Yick Fat Building, Yick Cheong Building, Fok Cheong Building, Montane Mansion and Oceanic Building. It was the brainchild of Watt Mo-kei, a Hong Kong-born businessman whose company, Cheong K, was one of the pioneers of Hong Kong’s post-World War II real estate industry.

Watt began small, with a group of four-storey tong lau in Mongkok, before setting his eyes on former industrial sites that were being sold for redevelopment. In 1955, Cheong K acquired a former rubber factory in Shau Kei Wan and redeveloped it as a 12-storey apartment building. The company’s projects got bigger and more ambitious, until finally it acquired a piece of land once occupied by the Taikoo Sugar Refinery in Quarry Bay.

With support from Wah Yuen Investment, another property company, Cheong K drew up plans for what was billed as Hong Kong’s cheapest housing complex. When it was announced in 1964, Parker Estate advertised flats starting at HK$15,000, with a 25 percent discount for anyone who paid in one lump sum. Even those who had to borrow money were offered an attractive financing package of just one percent of the purchase price per month, which industrial historian York Lo describes as “the world’s lowest mortgage payment at the time.”

The building’s architecture was typical of others that Cheong K had built: utilitarian to the extreme, with the goal of cramming in as many housing units as the buildings codes would allow. It’s not even clear who designed the building, but Lee Ho-yin, head of the University of Hong Kong’s architectural conservation programme, thinks it may have been Watt Mo-kei’s brother in law, architect Lung Shiu-kee. That’s just a guess, though. “There’s no information about him on the internet, and I don’t know if Watt had hired Lung to do the design, but this is one possibility,” says Lee. 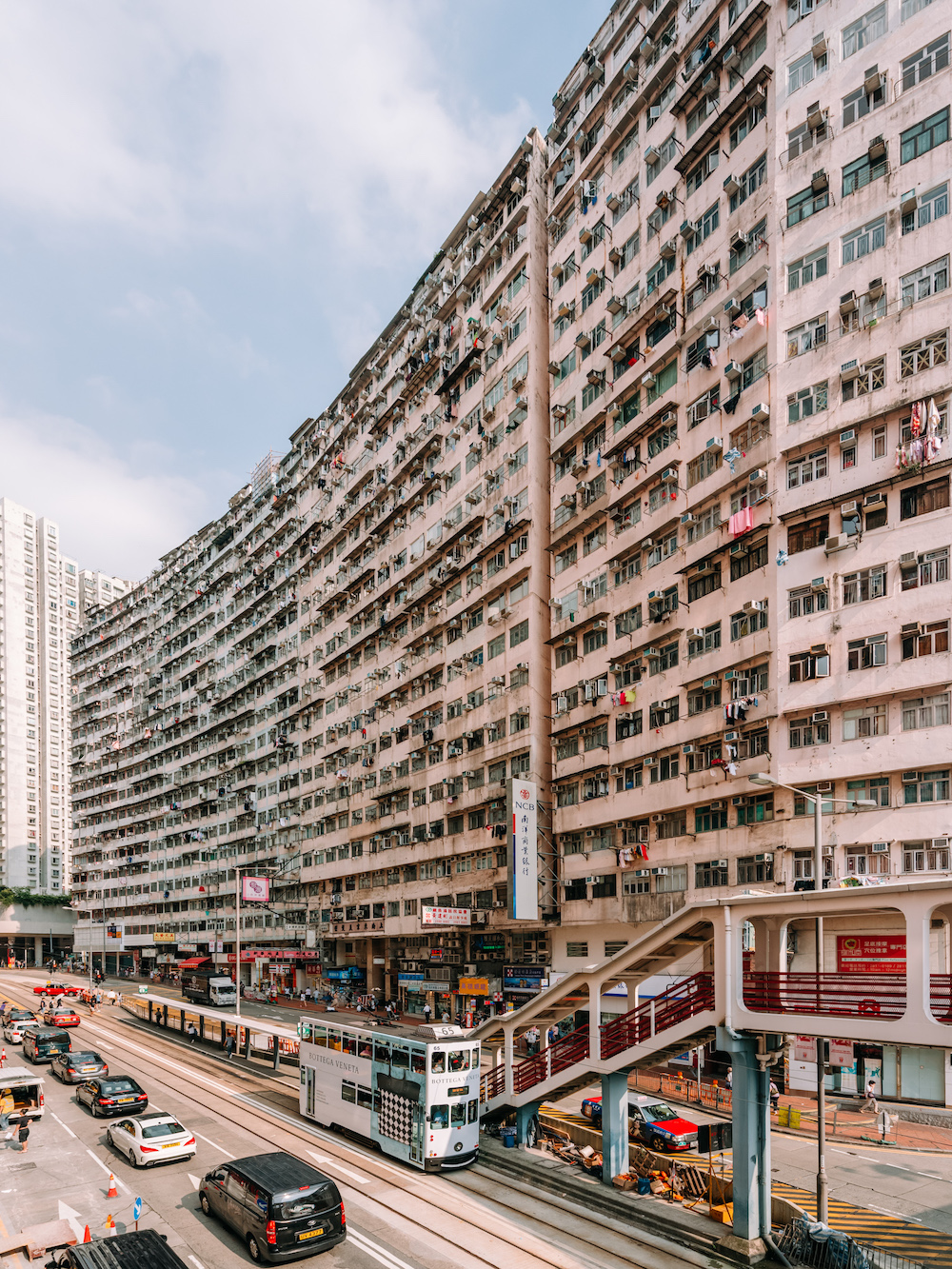 In any case, Watt’s involvement in the project came to an end before it was even built. Hong Kong was hit by a banking crisis in 1965, followed the upheaval of the 1966 Star Ferry riots and the even more serious 1967 riots. Cheong K and Wah Yuen were wiped out by the instability and they defaulted on the money they had borrowed to build Parker Estate. The project finally went ahead when it was rescued by a third developer, E Wah Aik San, and it was built in 1972, with the first buyers moving into their new flats in the sweltering August heat.

There were many of them. Together, the five blocks that make up the building contain 2,443 flats, and illegal huts soon filled up the rooftop space. Lee estimates the building is home to roughly 6,840 people – a conservative estimate based on Hong Kong’s average household size of 2.8 people. Considering it occupies just 11,000 square metres of space, he says, “the Monster Building is surely the densest spot on earth.”

The numbers are all the more remarkable when you consider that the Monster Building was among the last of its kind. Like Chungking Mansions in Tsim Sha Tsui or the Metropole in North Point, the five huge blocks in Quarry Bay were something called a composite building – a kind of oversized tenement block. These buildings were so huge they cast a permanent shadow on the streets below, and in the years after the Monster Building was completed, Hong Kong’s building codes changed to favour skinnier towers that allowed for more light and better ventilation.

So what is it like to live inside a monster? Eva Ho, who works as an administrator at an educational centre, has spent her entire life in the building. “It’s just a normal living place for me,” she says. At its best, the building offers unparalleled convenience, with grocery stores and a wet market on the ground floor, and two courtyards ringed by restaurants. At its worst, Ho says the building can feel “moody,” with a half-century’s worth of grime, poor ventilation and no views to speak of. “What I can see from the windows are the other two buildings,” she says.

The Instagrammers haven’t helped. They flock to the building to capture the view from inside the courtyards, whose staggered windows have become emblematic of Hong Kong’s high density. But they are also taking up space from residents who normally use the courtyards for recreation. “You could always see people doing different things in that area in the past,” she says. “The elderly loved to play mahjong and the youth loved to run and play badminton.” Now it’s hard to find space to relax amidst all the clicking shutters. Ho is bemused by the attention her home is getting; she says she had never considered its aesthetic appeal until the photographers started showing up. If she had the chance, though, she would move elsewhere – perhaps somewhere newer, with better ventilation and a nicer view. But Hong Kong property is more expensive than ever, so she stays put. “I don’t have money to buy another apartment in Hong Kong so I cannot move away,” she says.

There are no doubt many property developers that would love to knock down the Monster Building and replace it with luxury flats. Luckily, there is no sign of that happening. “It will take enormous time and money to buy out all the owners, not to mention the potential risk of rousing the ire of politicians and social activists for the likelihood of displacing so many subdivided flat tenants,” says Lee Ho-yin. He notes that the shopping arcade was recently renovated, and “the mall operator won’t be splurging the investment if there’s an active effort to acquire the property [for redevelopment].” And so the Monster Building lives on, both as a haven of affordable living and a strangely beguiling landmark – monstrous in name, but not in spirit.

An enormous block of shops and housing was conceived as an affordable place to live – but now it has also become a tourist attraction.