There is a new wave of French cuisine washing over Hong Kong. In Part I of this series, we looked at how a new band of restaurateurs is bringing customers out of traditional hotel restaurants and into casual bistros for a taste of authentic French cuisine. From casual fine dining to home-style hearty food, we chat to a handful of these passionate French émigrés who are bringing new flavours and experiences to Hong Kong. This week, we look at those who are focused on delivering a slice of France’s terroir – the essence of its land – to your table. For the love of wine: La Cabane Wine Bistro

Wine is central to La Cabane’s identity – and more specifically, natural wine. When Karim Hadjadj and Cristobal Huneeus opened the Hollywood Road bistro three and a half years ago, their aim was to bring tasty food to accompany the natural wines they were already importing to Hong Kong. Their dishes are seasonal, made with organic vegetables imported from Brittany. The wines come straight from the winemakers themselves and this informal relationship is reflected in the restaurant’s way of doing things.

Huneeus and Hadjadj opened their natural wine shop on Shin Hing Street five years ago, selling wine that was cultivated using traditional methods, without machinery, chemicals or preservatives, which proponents say delivers a deeper connection to the terroir represented by each vineyard. They soon realised there was a demand for more, and with the elimination of tax on wine in 2008, it became easier to source from small producers.

Their success demonstrates how the palate is constantly changing in Hong Kong. Customers are more open to new flavours and new cultures – and people drink more than before. La Cabane’s customer base rests not only on French expats, but on Hongkongers who have a mixed identity, who have grown up in different places and have been exposed to different types of cuisines and wine. “There is more creative food than before,” says Huneeus. “There is a generational difference that is now following global food trends, there is now more demand for authenticity of taste and at the centre of that is the product, the terroir.” 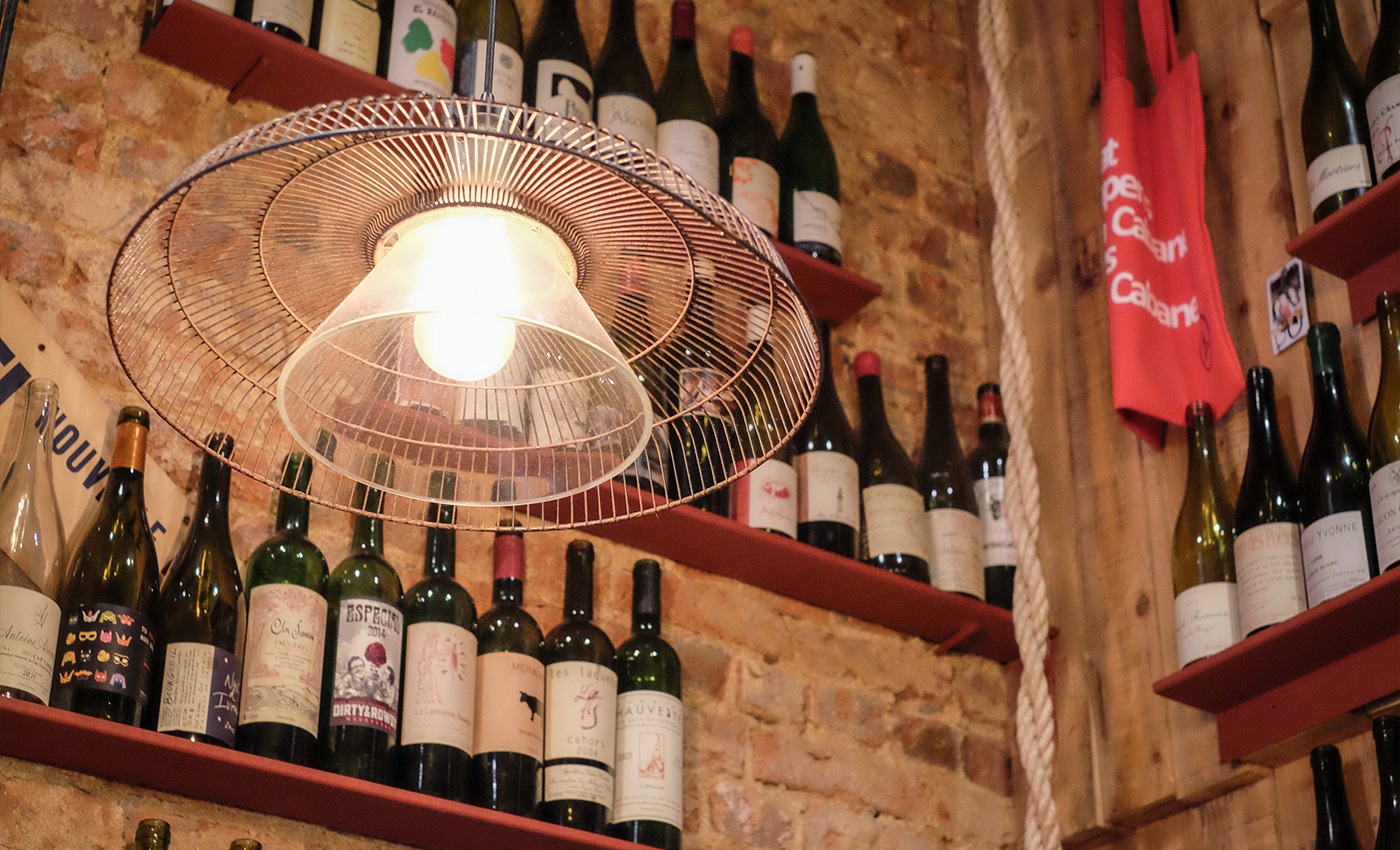 A selection of wines at la Cabane – Photograph by Nicolas Petit

This demand for authenticity has been central to the rise of the French bistro scene’s popularity in Hong Kong. It is situated in a wider context of product-centred food in a relaxed atmosphere, something reflected in the rise of the gastropub in Britain and the bistronomique in France. The approach puts an emphasis on quality and engagement with customers.

Competent staff are central to La Cabane’s success. Those working there can explain the history behind the wines, conduct tastings and educate customers. Many French bistros now hire young French people who have been travelling in the region and decide to stay in Hong Kong for awhile, enabled by new immigration schemes like the working holiday visa. The owners are also there every day making sure that things run smoothly.

Huneeus and Hadjadj are getting ready to open a new Mediterranean-inspired restaurant down the road, Bayta. Like La Cabane, its menu will be designed to bring out the flavours of their wine. “Wine is linked to the soil, it has emotion,” says Hadjadj with a smile. Emmanuel and Sophie Vallier want to bring you a slice of the French terroir – and a delicious one at that. The owners of Stan Café in Stanley and B.A.M – Le Garde Manger in Sheung Wan (B.A.M. stands for bon à manger – good to eat), the Valliers take their produce very seriously. Emmanuel goes to France every year to work with producers, small farmers and people passionate about their craft, bringing back the very best in French cheese, charcuterie, wine and of course all the cream and butter they need to create their indulgent “Sunday pastries”: éclairs, millefeuille and tarte au citron. They also supply high-end restaurants at the Peninsula, the Mandarin Oriental, the Four Seasons with what they call their “niche catalogue” – they’ve met every producer in person and tasted every ingredient before adding them to their sales list.

The family style kitchen at Stan Café resembles a weekend market in France, with a pâtisserie (cake shop), boulangerie (bakery), fromagerie (cheese shop) and more. With the aim of making you feel like you have just set foot in France, the Valliers have succeeded in bringing real quality ingredients, backed by interesting stories. “We want to bring traditional products that reflect what you would get at a French market,” says Emmanuel. “It is not about fashions or trends, but about authenticity.” One of their staff even sells duck and goose products from his aunt’s farm in France – even in Hong Kong, it’s possible to have the food delivered directly from the producer to the client.

Emmanuel’s initial desire was to open a bakery that would make up for the lack of good bread in Hong Kong. “A French without real bread is not a happy French,” he says, laughing. They eventually expanded the concept to include other products and family-style food. Being in Stanley gives their place a holiday feel, attracting families and weekenders who come to escape the busy city for awhile.

They responded to popular demand for a more central location by opening the deli-style B.A.M. in Sheung Wan, but having two locations has not taken away from the personal touch that each place benefits from. “For us it is important to welcome customers and not put them under pressure,” explains Emmanuel. “It is about good food, good wine and relaxing. Our staff are trained to work in that way and so having staff you trust is very important.” It is places like this that are helping to change the concept of what French food is to Hong Kong people. It is about real quality ingredients from the dedicated producers that France itself holds dear. It is about relaxing in a laid-back atmosphere without the fussiness that French restaurants previously represented. It is about the fiercely personal touch that each individual brings to their project and the clear love they have for what they are offering.

Along the way, they have disproved certain myths about the Hong Kong appetite. When the Valliers first started, they were warned that local Chinese customers do not like baguettes because they are too hard; they prefer soft bread. But places like Stan Café have put the lie to that conventional wisdom. “We have local Chinese who come in for their baguette all the time,” says Emmanuel. “If you love what you are doing, you have to stick with it. I do not compromise on quality.”

Will expanding on their success take away from the authenticity these French eateries now embody? It’s hard to say, but for now we have a good excuse to continue watching them – while enjoying their food. With this creative mix of bistros being just a sample of what this vibrant scene now offers Hongkongers, these personal passions are making the city’s French food landscape richer and it’s oh si bon.

La Cabane, Stan Café and B.A.M. are bringing the essence of France to the tables of Hong Kong.