How to Avoid Hong Kong’s Hungry Ghosts This August This article was first published in August 2016 and has been updated with the dates of 2020.

Nearly all world cultures have festivals to remember the dead, and Hong Kong is no exception. Living descendants pay homage to their deceased ancestors on Ching Ming in the spring and on Chung Yeung in the autumn. But there’s another festival that is less well understood, a time when people all over the city burn offerings to the dead on city streets: Hungry Ghost Festival (Zung1 Jyun4 Zit3 中元節). It’s a muggy mid-summer evening outside a typical apartment building. As the sun falls and the street lights flicker on, people make their way out of their cosy apartments and position themselves in front of oil drums that seem to have appeared from nowhere overnight. With some sense of purpose, they burn wads of paper “hell money” and set down bowls of rice planted with smouldering joss sticks. They leave other food items, too: oranges, longans, roast meat. Over the course of the evening, people from all walks of life come and act out their own version of this ritual, lighting incense and leaving food gifts for some unseen entities. What exactly are they doing?

They are feeding hungry ghosts – not out of charity so much as a precaution. During Ghost Month (gwai2 jyut6 鬼月), which lasts from August 11th to September 9th on the Chinese calendar, it is better not to take your chances with the unhappy spirits that wander the territory looking for sustenance.

After all, Hongkongers believe in ghosts. Not all of them, but a higher percentage than in many other countries. They once shared this belief with those across the border in China, at least until the Communist government issued edicts between the 1950s and 70s that prohibited people from believing in ghosts. British-ruled Hong Kong never made any attempts to change the local spiritual beliefs. 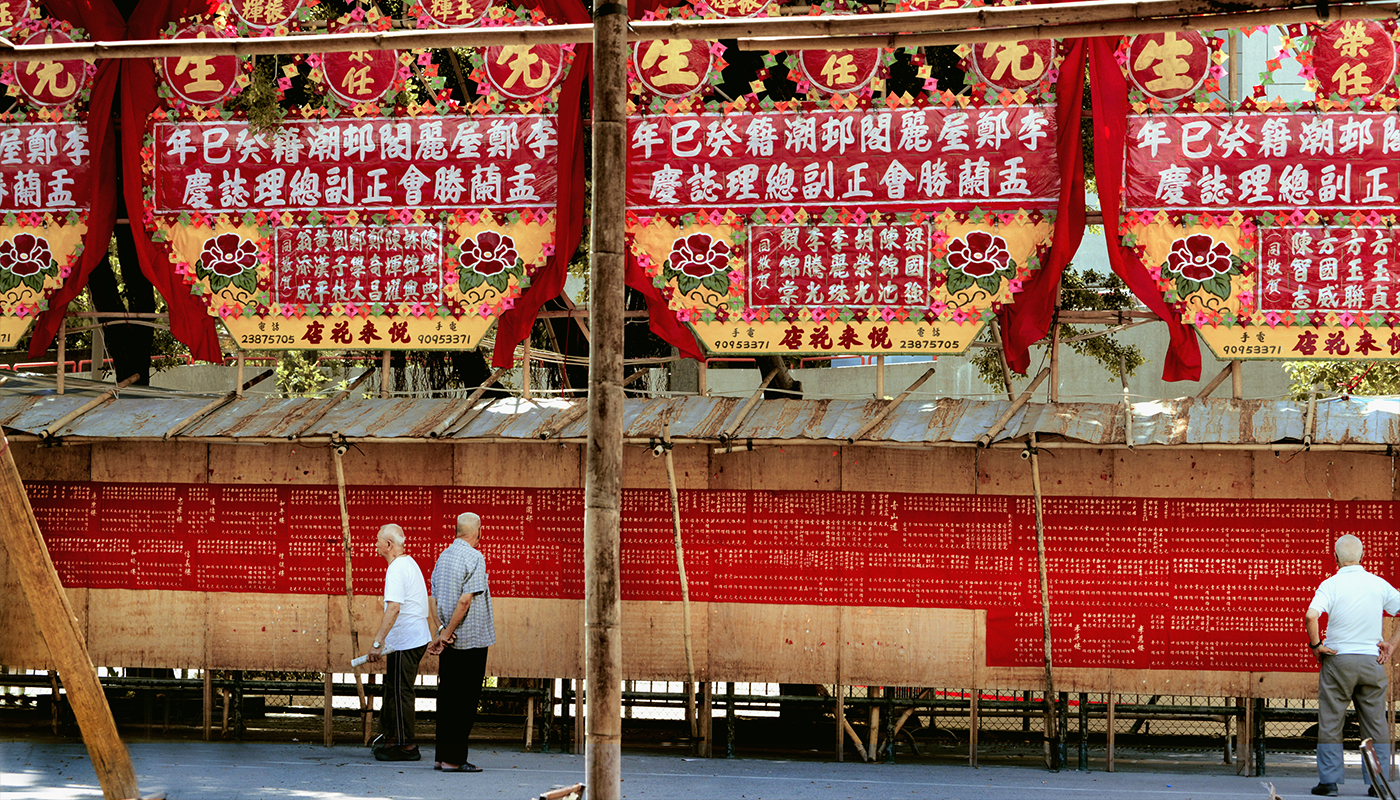 Ghosts are feared. The dead are in it for themselves and even family ancestral spirits need to be appeased in order for the living to have a happy existence. Though it may be referred to as “hell,” as in hell money, traditional Chinese folk religion sees the afterlife as another version of our current mortal existence. At some point, everyone goes to hell, and when they get there, they need money, food and luxuries to lead a comfortable life. When someone dies in unfortunate circumstances, however, or their family does not give them any offerings, or simply because they have no descendant to look after them, a ghost becomes restless and angry – a hungry ghost.

The seventh lunar month is when the gates of the hell are opened, allowing the spirits to wander the earth in search of sustenance. The origins of this belief can be traced back to the Buddhist festival of Ullambana (Jyu4 Laan4 Pun4 盂蘭盆), which marks the time when the Buddha taught one of his followers how to appease the angry ghost of his mother by offering her goods on the 14th day of the 7th month. Eventually, this Buddhist tradition was absorbed into Chinese customs, with the main date of observance shifted to the 15th, which this year falls on 2 August 2020.

The festival is particularly prominent in Southern China, and people of Chiu Chow descent make offerings throughout the entire month, not just on the 15th, which is why ritual burnings are common every night of the festival in Hong Kong. Bamboo theatres host Chinese operas to entertain the visitors from the afterlife. Feeding the hungry ghosts is not the only thing required during the month. There are certain things to be avoided, too. It is seen as a bad time to get married, start a business or move house. Nighttime activities should be kept to a minimum as this is when ghosts are most active. People might be less inclined to stroll around after dinner, hang up their laundry or celebrate birthdays after dark, so as to avoid running into a ghost. Find some money on the street? Don’t pick it up, because it might belong to a ghost. No singing, whistling or wearing red, either – these might draw the attention of a spooky passerby. Even swimming is avoided, since the ghosts of people who drowned may try to pull you under the water so they can inhabit your body.

These might sound like old fashioned beliefs, but they are still widely held today. The most recent taboo is taking selfies, as ghosts might appear in the picture.

This may sound like Hongkongers lead fearful lives, but the reality is that people here are as fascinated by ghosts as they are afraid of them. The commercialisation of ghosts began a long time ago. Hong Kong martial arts movie star Sammo Hung brought hopping Chinese vampire ghosts to the screen in the 1980s, and movie stars have been staving off vampires with glutinous rice — the Chinese equivalent to a necklace of garlic — ever since.

While the interaction of traditional belief with pop culture may have watered down superstitions in other countries, this is not quite the case in Hong Kong. Young Hongkongers may seem a little dismissive of their parents or grandparents folk practices, but they still put stock in the idea of ghosts. A major property website even contains a database of haunted apartments. The tradition of Ghost Month is very much alive in Hong Kong and the practice of feeding the dead is not going to disappear anytime soon. So watch where you step this August, avoid burning yourself on infernos of paper money outside your building and certainly don’t whistle while you walk.

All photographs are courtesy of Cheryl Chan

Correction: Due to an editing error, this piece mistakenly asserted that the front row of bamboo theatres are reserved for ghosts. They are not. We regret the error.


How to Avoid Hong Kong’s Hungry Ghosts This August

Why you should forget about taking a selfie this month – and other tricks to survive Hong Kong's Hungry Ghost Festival.