Why Sugarcane Juice Is a Summertime Favourite in Hong Kong Amidst the graffiti murals, art galleries and cocktail bars of Hollywood Road is an old-fashioned shop that instantly transports its customers back to the 1950s. Lit by pale-green fluorescent tubes, a tabby cat hops around the few round wooden tables and stools perched on the lime and white tiled floor. A huge dark brown urn storing tortoise shell jelly occupies half of the front entrance space. High above, blackened copper plates writing out the shop’s Chinese name are proudly plastered onto a creamy marble frame. Beneath them, a line of customers gather with paper or glass cups in their hand, chatting as they sip liquid poured from a transparent container of green juice, which looks almost luminous in the afternoon sun.

This eerie tipple is the signature drink of Kung Lee Sugarcane Juice (gung1 lei6 zan1 liu6 zuk1 ze3 seoi2 公利真料竹蔗水), which has been selling sugarcane juice and sugarcane products since it opened in 1948. That marked the dawn of the drink’s popularity in Hong Kong. “In Hong Kong, sugarcane grinders were introduced in the 1940s,” says Ben Chui, fourth-generation co-owner of Kung Lee. Until then, hawkers sold entire sugarcane stalks, peeling away the bark so customers could chew the core, sucking mouthfuls of sugarcane juice which was pure, sweet and soothing like fresh stream water. This was a particularly popular snack for cinema-goers. After grinders were introduced, “people became more aware of hygiene and thought that it was rather messy that sugarcane bagasse was left behind in cinemas after screenings,” says Chui. “That was how the trend of drinking pure sugarcane juice started locally.”

But why was sugarcane such a popular treat in Hong Kong to begin with? Chui explains that, according to traditional Chinese medicine, the hot and humid summers of southern China led people to suffer from excess heat in the body. Chewing sugarcane was an easy way to keep cool. People in other warm parts of the world developed the same habit, though they consume sugarcane in different ways. In Taiwan, people add ginger to their juice, in Singapore they add milk, and in Pakistan they enjoy mixing it with citrus. 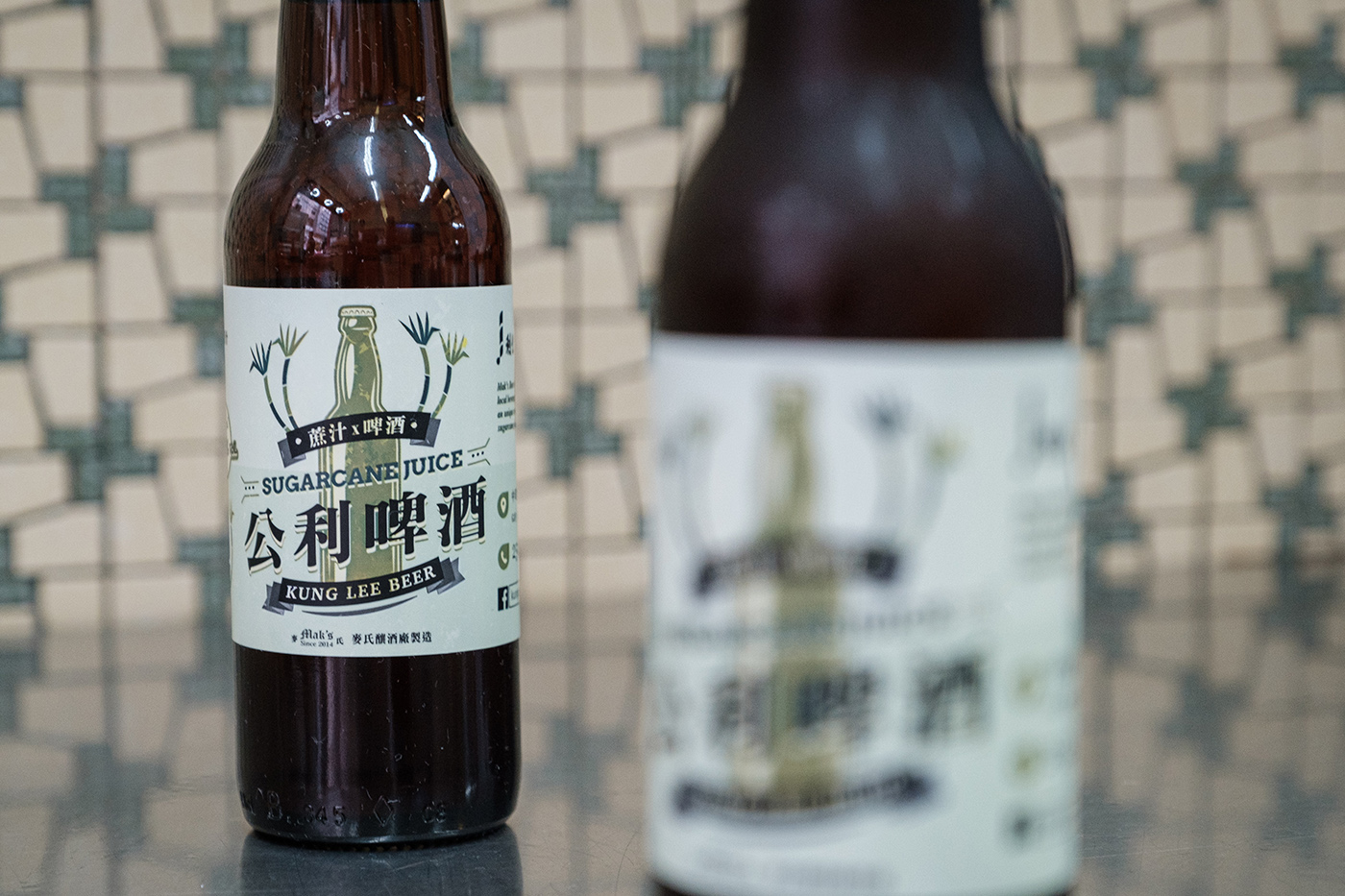 What all of these places have in common is that they are ideal spots for growing sugarcane, with intense sun and plenty of moisture from rainfall. Saccharum sinense Roxb or zuk1 ze3 (竹蔗) in Cantonese but commonly called Chinese sugarcane —was introduced from Fuzhou to Hong Kong in as early as the 17th century. It was chosen specifically because it is pest and drought resistant, with high levels of sugar, according to Lin Man-houng, researcher at the Institute of Modern History in Academia Sinica, who wrote a book about the tea, sugar and camphors industries in Taiwan.

After the British leased the New Territories in 1898, they disapproved of what they saw as the variable quality of the Chinese sugarcane planted in loosely-regulated cane fields. In response, the colonial government introduced the Hawaiian species of sugarcane for mass plantation. Many local cane farmers were employed to cultivate this new species, which supplied small-scale local sugar factories (large refineries like the one operated by Tai Koo imported their cane from overseas, as local fields didn’t have the capacity to supply them). A graffiti mural of a grinder

One of these sugarcane farmers, Lam Fong-nam, ended up founding Kung Lee. He rented a shop on Hollywood Road and bought a grinder – a time-honoured machine that is still in use today. “A lot of modern grinders, after squeezing out 70 percent of a cane’s juice, cannot re-grind the same cane, whereas ours can until the cane is crushed down to fine pulp,” says Chui, Lam’s grand-nephew. Although they are more wasteful, newer grinders are much faster, which is why most shops have switched over to using them, making Kung Lee one of the last of its kind in town. Every day, it reliably churns out up to a thousand catties (600 grams) of sugarcane juice every day.

The grinder isn’t the only difference between Kung Lee and other shops. While other businesses directly grind sugarcane, Chui prepares his juice in a more traditional way, by unpeeling the stalks, steaming them for several hours and letting them cool before grinding. “By unpeeling the canes, the unpleasant raw taste of the canes is removed,” he says. “Steaming enhances the flavour and richness of the juice by concentrating it.”

A mother and daughter about to purchase products from Kung Lee

Just as important as processing the sugarcane is the cane itself. Kung Lee for a time planted its own Chinese sugarcane instead of the Hawaiian breed, and while the former’s taste was sweet and pleasant, it did not grow especially abundantly or quickly. As older generations of sugarcane farmers retired, many local fields were abandoned. Lam stopped farming and began to import the same sugarcane from the coastal regions of Guangdong. But even those areas stopped cultivating the formerly common species. “We are no longer able to find Chinese sugarcane,” says Chui.

Instead, Kung Lee now uses black sugarcane (hak1 ze3 黑蔗), commonly grown in Guangdong, and Muge white jade sugarcane (muk6 gaak3 baak6 juk6 ze3 木格白玉蔗) from the town of Muge in Guangxi. Muge white jade sugarcanes are known for a hint of fruitiness whereas black sugarcane is much sweeter than the sugarcane introduced from Fuzhou. “The only problem is that black sugarcane is ‘heaty’ and easily triggers phlegm production, but steaming reduces this effect and makes it more suitable for drinking in general,” says Chui. White jade sugarcane, on the other hand, are cool in nature. From the Chinese medical perspective, their juice helps remove excess heat and humidity in the body. Research has also shown that freshly pressed sugarcane juice contains potassium, phosphorus, magnesium, calcium, iron and a host of vitamins. But these health qualities still aren’t enough to attract a younger generation of customers who are tempting by a proliferation of juice bars and cafés serving a panoply of drinks. Chui laments that selling sugarcane juice is a sunset industry in Hong Kong. “Most of our customers who come in for sugarcane juice are old people,” he notes. “And we want to retain this original location of our shop, but why would business people in suits walk all the way up to Hollywood Road just for a cup of sugarcane juice in the summer heat?”

Kung Lee is far from the only place to buy sugarcane juice in Hong Kong – it is sold by dozens of herbal tea shops, restaurants and street side hawker stalls. But most of these places don’t produce the drink in the traditional way, and many add refined sugar to their juice. Kung Lee is flooded with thirsty customers during the day.

Chui is determined to survive the sunset and keep the tradition alive. His shop now serves more products than ever, including Abrus herbal tea, five flowers tea, sesame tea, sour plum tea, Grosvenori tea, sugarcane tea as well as tortoise shell with herbal jelly, something more typically found in local herbal tea shops. The newest item on Kung Lee’s menu is sugarcane jelly, a local twist of the classic English jelly, which has even convinced some younger customers to trek up the hill to Hollywood Road. Kung Lee also sells its products online, delivering them right to its customers among Chui’s younger customers. Kung Lee is the first old-style juice shop to sell products via online platforms which deliver juices, teas and jellies to his customers’ doorsteps.

But there is one thing that Chui refuses to change: making sugarcane juice the way his granduncle did when he first started the business seven decades ago. “Tradition inherited from before my generation and modifications from mine can go hand-in-hand, so that we can have the best of both worlds,” he smiles against the setting sun.


Why Sugarcane Juice Is a Summertime Favourite in Hong Kong