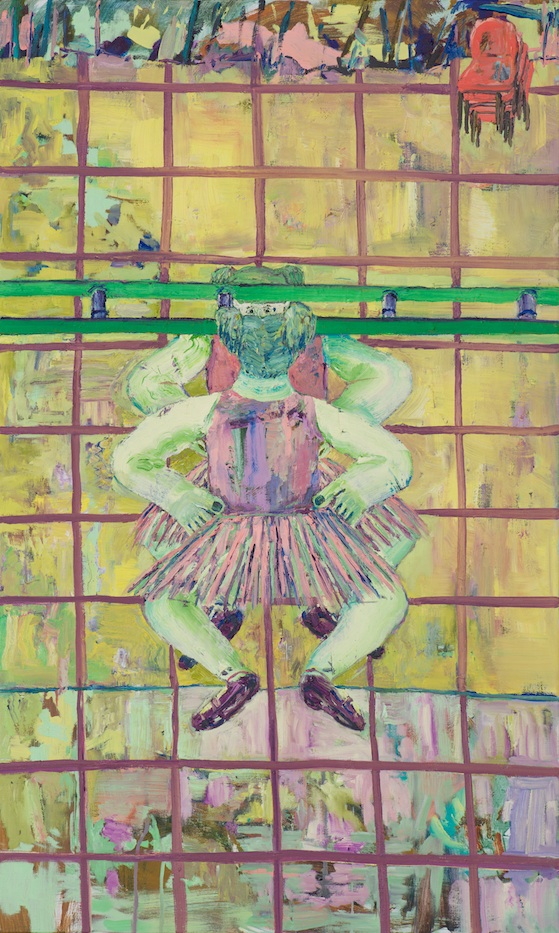 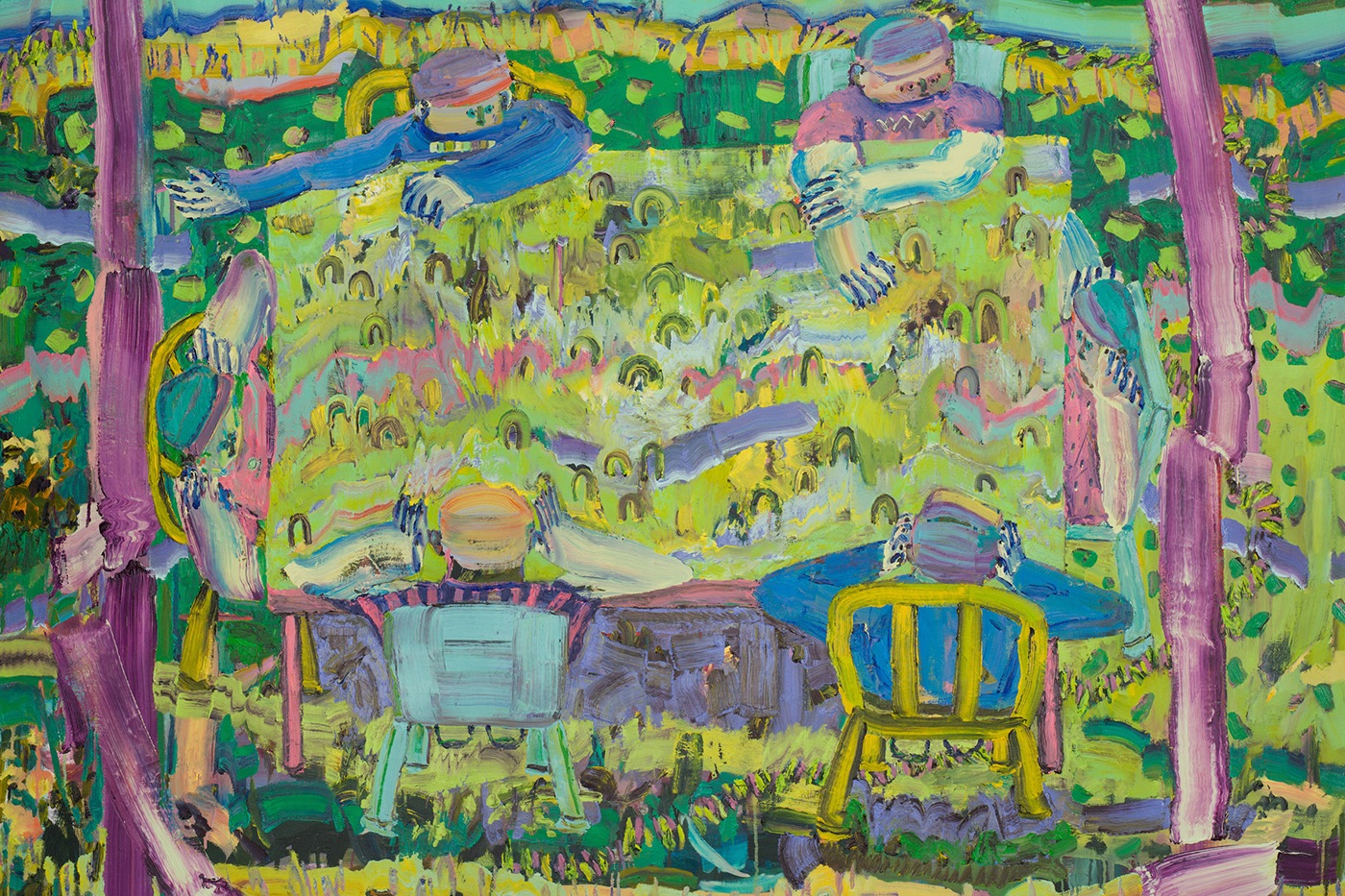 Artist Cheng Ting Ting still sleeps in her childhood bed. Born in Sha Tin 26 years ago, she now lives surrounded by the same things she saw with her childhood eyes, in the same high-rise her family has lived in for decades. But while she has stayed in the same place, the way she experiences her environment as an adult has profoundly changed. She describes a sense of disconnect between her adult and her childhood selves and says that looking back sometimes feels like looking into the life of someone else, a baffling sensation that is particularly strong and discombobulating because of the familiarity of her surroundings. This disconnect is one that she seeks to discover and do away with in her latest body of work, Enfante.

Cheng is fascinated by how her child and adult selves might have occupied the same space, but how different their minds, bodies and perspectives are. The strangeness of that chasm creates a texture in her work that strives to make the familiar strange, through a child’s curious, confused and vulnerable eyes.

This journey into the mind of a child, which combines elements of her own hazy memories with observations into the experiences and artwork of children she teaches as an art instructor, is the basis for a series of paintings that borrows the techniques and qualities of children’s art. These works evoke the spirit of children while containing the strong, idiosyncratic and sophisticated compositions with which Cheng is starting to make waves in Hong Kong’s art world. It’s important to note that she is not just playing with children’s motifs and brushstrokes: she is striving to make them readable to the adults who have forgotten how to empathise with children. This work draws from the pioneering fields of art therapy that finds links between the mark-makings of children and their secretive psychologies.

Repurposing the expressions of children is certainly not a new method of artistic discovery. Since the Romantics in the second half of the 19th century, artists, writers and philosophers have espoused the virtues of looking into one’s childhood self to find answers to questions of the heart the adult world of reason and order makes no space to interrogate. The early 20th century Expressionists, drawn to the extreme emotions embodied by children, were arguably the fathers of modern abstract art. This was in an era that had witnessed the onset of psychology, with Nietzsche giving the world a roadmap to self-discovery. Literary works in this sphere – among them ETA Hoffmann’s Der Sandmann, which drew a direct link between childhood trauma and adult madness, proved invaluable to Sigmund Freud’s studies on the subconscious.

Cheng’s paintings of children create scenes that exist in a middle ground between a child’s conception of the world and that of an adult. This is what is particularly interesting about her work: she occupies the in-between worlds of herself and her subjects in much the same way as a teacher or a parent must strive to inhabit the mind of the child in their care. This is something that is very difficult to do if the pressures of adulthood have killed off one’s inner child.

In person, Cheng is as cerebral as one might expect when you see her striking and esoteric work. She speaks in somewhat elegiac sentences that belie her gamine appearance and playful physicality. Soft-spoken with a generous smile, her quietly adventurous and inquisitive character recalls both Amélie Poulain and Huckleberry Finn. She is also a bit of an anachronism among her generation of artists, preferring the still, contemplative — and to her mind “passive” — medium of painting over the flashy three-dimensionality of installation and multimedia, the art forms du jour. She has always preferred painting because a canvas doesn’t impose itself on its viewer in the way other “louder” media do. This gives viewers the chance to investigate and be with an artwork on their own terms, she says. But while she has always loved painting, it was doodling as a child that piqued her creative flair. Sketches in ink and pencil, which she still produces now, recalls these childish adventures with still lives.

“I really liked to paint flowers, with petals of three. I still haven’t figured out what the patterns of three means,” she says, furrowing her brow and playing psychologist to her childhood self. Freud might well have told her that the number three is highly symbolic, both in Judeo-Christian strains of thought (think of the Holy Trinity), and in terms of gender (a yearning for a way out of our world of binaries, a third path; something that chimes nicely with the flowers she drew).

But of course, Freud was wrong about many things and removed from many spheres of life, preferring to turn to books and literary characters for answers, and choosing incisive analysis over empathy as a means to explore the mind of another. Cheng’s interrogations into the minds of her subjects feel different. They are softer, tenderly drawing from real subjects while eliciting her own memories and perspective. This is a way of getting under the skin of another that feels like it comes from a place more of empathy rather than appropriation, and perhaps this is what makes her works feel feminine and maternal – while happily steering clear of the kitsch, sentimental aesthetics one too often associates with these spheres.

In conversation, Cheng is critical of Hong Kong’s education system and sees overlap between the expectations teachers and parents heap on their children in the academic subjects with that of art classes that are graded along similarly spirit-destroying parameters. Cheng describes observing how students develop and learn on their own terms and at their own pace, speaking of how each child seemed to exist in their own time zone, separate from one another. This rhythm of each child moving at their own speed is expressed in two of her paintings, “Where Are Our Ears” and “Where Are Our Heads,” which depict students instructed to find and feel these parts of their own body. It captures a moment in time in which each child is doing something slightly different while still acting in unison. Interestingly, their facial expressions are all rather similar.

“When I was young, I remember that we were encouraged to be in a group,” recalls Cheng, who describes her childhood as a thoroughly ordinary one. She remembers feeling pressure to conform to group dynamics, and that she was expected to prefer being with many people rather than being on her own. In reality, what she preferred — and still prefers — is quiet time spent with one good friend rather than larger, raucous gatherings. This is one of the many examples of how life as a child can often feel like being squeezed as a round peg into a square hole at a time when one should have the freedom to discover one’s own place and journey.

These ideas find themselves expressed in Cheng’s paintings, with repetitive marks, dashes, and what look like inverted smiles, all of which serve as patterned textures. In art therapy, repetitive marks and the act of copying are said to express the ways children observe and learn from one another, while figuring out when to distinguish themselves from their peers and investigate their own paths. But repetitive marks can also signify anguish and anxiety, an inability to break free from established (and maladaptive) patterns – something that one might also see in the seemingly blank expressions her subjects share with each other.

In the world of psychology, as in many disciplines, new keys continue to unlock doors we never thought possible to open. A major, post-Freud breakthrough was the recognition that in order to truly inhabit the world of another, one also had to be open to the possibility of re-encountering one’s own pain, and feeling one’s own long-forgotten childhood sorrows. This means truly listening to a child, feeling what they feel, and learning to live in that strange and disorientating space between us and them – the space that Cheng so movingly captures.