Inside Wet Markets, the Heart of Neighbourhood Life in Hong Kong When you step into Tung Yick Market in Yuen Long, the first thing you see is red. Fish scales shine a glossy rouge, luminescent under jarring white lights and scarlet lampshades. A red gloved hand reaches and grabs a snapper by its belly, places it first into the red basket on a weighing scale, then beneath a decisive cleaver spilling red viscera, and finally deposited into a crinkled red bag.

The customer pays exactly HK$42 without asking for the price. “I’ll save you some scallops for your Friday meal,” the seller responds. It’s an efficient exchange based on the instinct that comes with years of experience. Despite its brevity, it’s an interaction filled with comfort, reflected in smiling red-flushed cheeks.

Wet markets (gaai1 si5 街市) are essential spaces in Hong Kong’s local communities. But they’re also spaces that are misunderstood, especially by people overseas who have been misled by lurid descriptions that make wet markets seem like something other than the neighbourhood gathering places they are. Although the scientific community has yet to agree on the exact origin of the novel coronavirus that caused the ongoing Covid-19 pandemic, many reports point to animal products sold at the Huanan Seafood Wholesale Market in Wuhan, which was the site of the world’s first mass outbreak of the disease. In response, a group of elected officials in the United States Congress drafted a letter urging the World Health Organization to shut down wildlife markets, a position bolstered by the United Nation’s chief of biodiversity.

That may sound reasonable, given the ethical and health risks of selling wildlife. The Huanan market did indeed sell exotic animals, including bats that a number of studies have suggested are the animals that first incubated the new virus. But the push to end the wildlife trade has morphed into something else altogether: a campaign to ban wet markets outright. “Calls Grow To Ban Wet Markets Amid Concerns Over Disease,” announced a headline on American public radio network NPR in mid-April, accompanied by a photo of hawkers selling chicken in Shanghai.

Yet the vast majority of wet markets are not wildlife markets. For the most part, they are vital sources of fresh food for people not only in Hong Kong and China but also in Thailand, Vietnam, Taiwan and just about every other country in Asia. Like the weekly street markets in France—where you can buy a whole rabbit and have it butchered in front of your eyes—or the farmers’ markets that have once again become popular across the United States, wet markets are places to buy food that is fresher and more seasonal than what you’ll find in the supermarket. And on top of that, they’re places that nourish independent enterprise and community interactions.

There are hundreds of wet markets in Hong Kong alone, including 74 operated by the government, dozens of street markets and others run by private enterprises, notably The Link Reit, which manages wet markets in public housing estates. To understand the history and context of these markets, it’s worth starting with the name. The expression “wet market” is rooted in Britain’s former Asian colonies, including Singapore and Hong Kong, and it refers to the markets’ abundance of produce—literally “wet goods” in Cantonese (sap1 fo3  濕貨)—as well as the use of water to keep seafood alive, vegetables looking clean, and chopping boards washed. In this sense, “wet” is essentially a synonym for “fresh.”

According to data from the government’s Food and Environmental Hygiene Department, nearly two thirds of wet market stalls sell fresh food, as opposed to dry goods such as packaged food or non-food items. Compared to supermarkets, the variety is remarkable: local bananas, seasonal greens grown locally or in nearby Guangdong province, tropical fruits from Thailand, roots, herbs, spices – and an astonishing array of live seafood, including mantis shrimps, flower crabs and various types of fish swimming around in styrofoam tanks. 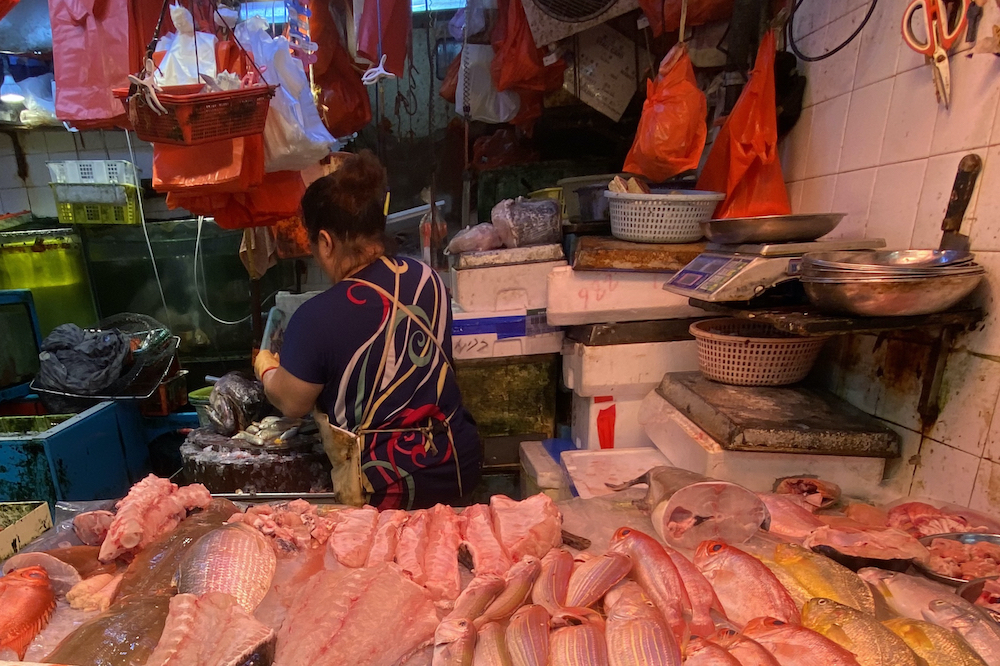 All of this freshness comes from local demand. Every day in Hong Kong, according to government data from 2018, the average individual consumes 54 grams of fresh fish and 308 grams of fresh vegetables. That compares to 19 grams of fish (including frozen) and 210 grams of veg for the average American, according to the US Department of Agriculture and the National Oceanic and Atmospheric Administration. Consumer research has shown that a large majority of Hongkongers prefer to buy their fresh produce from wet markets, due mainly to the wide variety of products. And freshness does not merely extend to meat and veg. It is often difficult to find fresh soy and wheat products in supermarkets, so it’s in the wet market where you will find wheat gluten (min2 gan1 面筋), firm tofu (dau6 gon1 豆乾), and silken tofu (gyun3 dau6 fu6 絹豆腐). There’s also a larger variety of spices and herbs than in most supermarkets, including freshwater caltrops, perilla leaf, mint and loquat leaf.

This diversity of goods evokes the very roots of the markets in an agrarian marketplace system that dates back to the 16th century in Hong Kong. Markets were held on specific days of the lunar calendar, usually alongside a main road or in a temple forecourt. Known by academics as a “periodic-marketing system,” the first such market in Hong Kong was in Yuen Long, and over the centuries other markets were held in towns like Tai Po and Shek Wu Hui.

After Hong Kong Island was occupied by the British in 1841, a new settlement quickly emerged along the shores of Victoria Harbour, and hawkers filled the streets with ad hoc marketplaces. Colonial officials saw this as a nuisance and moved to organise them into regulated market halls. The first was the Central Market, which was originally established in 1842 as the Canton Bazaar. After relocating a few times, it finally settled on Des Voeux Road in 1858, and it was completely rebuilt in 1895. Its architecture featured a Lingnan-style tile roof supported by thick iron columns, steel decking, and timber purlins – a structure that was both resistant to typhoons and easy to clean.

With the new market halls in operation, the government cracked down on street hawkers. But the massive influx of migrants from mainland China after World War II led once again to an explosion in the number of people selling food on the street. According to a government report on hawkers in 1947, the number of street hawkers had grown from 13,000 before the war to as many as 70,000 in the years afterwards. Just as in the 19th century, the government responded by building more marketplaces for them to do business.

Most of the market halls that exist today are utilitarian structures clad in white tiles, with grid-like layouts and stalls that are perfectly homogenous and identical in shape. Many of them aren’t especially pleasant – but they are important, both in an economic and a social sense. Customers barter jokingly but stubbornly, looking for a good deal. Old ladies collect cardboard boxes to resell to neighbourhood recycling companies. The hawkers work long hours because, for most of them, selling vegetables or meat is their only stream of income. “I opened this stall because I had no income, and my friend suggested that I try selling produce,” says a fruit stall owner in Tai Kiu Market named Mr. Chan. “In the beginning I thought, ‘Why not, just for a short while.’ And here I am for 23 years!”

The market share of supermarkets has risen significantly in the past few decades, but wet markets are still holding on, perhaps because consumer research shows that the public still perceives them as offering better quality or value. In one 2014 survey—the most recent available—that asked consumers about their seafood purchasing habits, 47 percent of respondents said they buy seafood at a wet market, 30 percent at speciality fish shops and 23 percent at supermarkets.

Beyond the food itself, they may be drawn by the social aspect. “Leng3 neoi5 靚女)!” shouts a fishmonger at one market. “Young woman! Come buy clams – all you need to do is boil it for four minutes! Chop up some spring onion, dice tomatoes, and fermented black soybeans.” The woman quips back teasingly. “How much? You better have a discount for me!” Wet markets not only provide goods for the community, they provide a community to begin with. It is this relationship of warmth and companionship, known as yan4 ching4 mei6 (人情味, “human touch”), that make wet markets such a quintessential part of Hong Kong. Unlike supermarkets, where interactions tend to be detached and formal, the lack of bureaucratic structures in wet markets allow for sociability and intimacy within buyer-seller relationships. Whilst buyers may frequent their favourite stall at the wet markets, it would be bizarre for someone to queue up in a supermarket to talk to a specific worker.

Walking past a fish stall, a 14-year old girl chats with the vendor. “Where’s your mother? She’s not coming today?” asks the vendor. “She’s visiting grandfather. Sent me to get the mud carp,” the girl replies.

“I’ve known the girl since she was five years old!” the fishmonger later explains. “She used to come with her mother every week, but less frequent once she began school.”

The relationship between hawkers can be just as warm. Many stalls are family-run businesses. In one case, three brothers sell seafood, one wearing funky alien-themed boxers under his white apron. Elsewhere, father and daughter sell vegetables; wife and husband sell fruits. Mrs. Chow, a fishmonger who looks decades younger than her 56 years, explains how she has spent her whole life in a wet market. Starting off as a butcher’s daughter in Macau, she carried her little brother on her back whilst helping her father with his stall. Only when she came to Hong Kong with her husband did she start her current fish stall.

Asked where her family is now, she smiles ruefully. “Everyone has their own dreams, and for younger generations nowadays, they tend to be more attainable,” she says. “I want my daughter to explore other jobs, so she doesn’t help me out anymore. I don’t want her to toil (san1 fu2 辛苦). Working here isn’t easy, but it helped me make a living and support my family. I’m grateful for that.”

As she speaks, another stall owner grabs Chow’s attention. “It’s nearly Dragon Boat Festival, so I wrapped a few glutinous rice dumplings,” he says. “I’ll bring some in for your family tomorrow!” Market hawkers often spend lunch break together, eating and having casual conversations. They also help each other out when in need, sharing goods with one another even if they are, strictly speaking, competitors.

This is far from the idea of wet markets that seems to have invaded the foreign imagination. Far from hotbeds of disease and illicit wildlife, they are pillars of the community, sources of fresh food and lively interaction. Hong Kong wouldn’t be Hong Kong without its wet markets.


Inside Wet Markets, the Heart of Neighbourhood Life in Hong Kong

Despite a global campaign to "ban wet markets," these neighbourhood spaces are places where Hong Kong's communities come together to buy fresh, seasonal food.