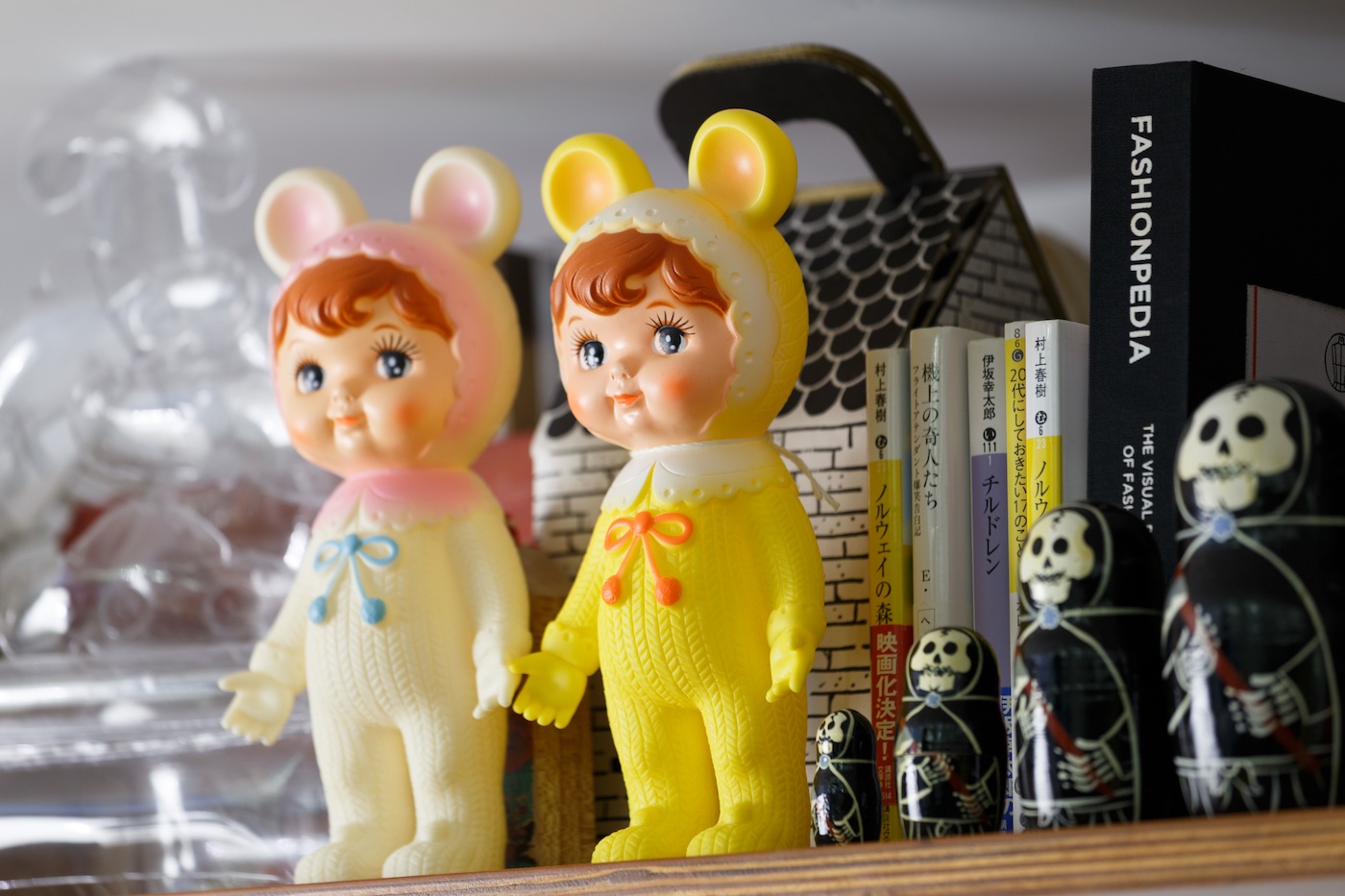 Frankie Cheung holds an unusual plant pot in the air with a look of bemused pride. Shaped like a Bauhaus piece of architecture, it’s a relatively recent addition to his lifestyle store in Central that contains contemporary Japanese design that is at turns ornate, quaint and edgy.

“I have a lot of respect for Japanese designers because of how much attention they put into things,” says Cheung. “Even a little handkerchief will come with a story.”

Cheung and his wife Cyrus Lam opened Okura, an endearing shop in May last year. Tucked away on the tranquil steps of Shing Hing Street behind bustling Hollywood road, the space feels as calm as its surrounding. But Cheung’s relationship with the world of Japanese design runs deep. “When I was young I really liked Japanese street style and design from Manga comics,” he says. “In the 90s that was really popular in Hong Kong. You see that influence here a lot.”

Cheung is certainly not alone in professing a love for the Japanese comic books and their aesthetics. When he was young, comics translated from the Japanese were all the rage in Hong Kong, which already had a deep history with comics.

Cheung’s love for Japanese design and aesthetic is shared by his wife, whom he initially met while they were both working for fashion brands that focused on introducing Japanese products to the Hong Kong and Chinese markets.

31-year-old Cheung has a warm smile and an approach to style that feels both elegant and edgy, which speaks to aesthetic interests combining a love of street style with an appreciation for the world of luxury fashion, the latter being a product of his time working at high end labels. And with unmistakable enthusiasm for his trade, he talks quickly and breathlessly, darting from one idea to the next with the palpable excitement and anxiety of someone pursuing their dream. “I love that I’m creating something with my wife – that’s really meaningful to me,” he says. Lam can’t be present at our interview as she’s at home tending to their nine-month-old baby, born close to the time Okura opened its door for the first time. “That’s right – two babies came at the same time,” says Cheung, referring to the store and his son. “It was a pretty stressful time.”

The idea that they would open a shop together in Hong Kong came naturally to them. With Lam’s focus on gifts and kitchenware and Cheung’s love of apparel, they saw a market for a shop curating what they believe to be the best of modern day Japanese design.

Okura is a play on the Japanese word for “ladyfinger” while also referring to a warehouse in which treasures are kept. Cheung believes that in modern Hong Kong, something of the old extravagance of shopping for thoughtful gifts has been lost. “Ten years ago, service in Hong Kong was one of the best in the world,” he says. “I want to bring that back.”

Cheung and Lam belong to the generation of Hongkongers who fell in love with the world of “Made in Japan” that can incorporate both the kitsch kawaii universe of Hello Kitty, cartoon stickers and school uniform clad pop stars, as it does the mature, idiosyncratic forms of Takata Kenzo and Commes des Garçon’s Kawakubo Rei. These designers proved integral in challenging the notion that style and trend setting was the preserve of the Western world. Up until that point, Hong Kong designers looked to European and America for trends to reproduce and build upon.

That coincided with an increasingly high regard for Japanese products worldwide, a consequence of the country’s economic bubble in the 1980s. This also served to inspire and garner global interest in an array of alluring cultural exports, from animation and pop and experimental music to fashion and design. With increasing profitability in the Chinese market, brands like IT Group, for which Cheung formerly worked, delivered Tokyo’s sharp styles and brands across China. This in turn inspired Hong Kong designers to create their own aesthetics that at once chimed with while differentiating themselves from the Japanese.

The world’s fascination with Japanese fashion has waned since those boom days. The 2000s saw the rise of fast fashion weigh heavily on Japan’s insular world of couture and craftsmanship. The fashion and design industries and movements ultimately fragmented. Efforts to export to foreign markets proved an increasing struggle. Korea’s swift but profound entrance into fashion’s world stage now also poses fresh challenges.

“There’s a saying that the Japanese like to keep their good stuff in their country and never export it,” says Cheung. “A lot of the brands we work with don’t speak English so it’s difficult for them to export.” One of the factors preventing more Japanese products from entering foreign markets comes from their reticent approach to building business ties with overseas clients.

Developing relationships with Japanese designers takes language and trust-building skills to an extent that are at odds with the modern world of trading. As such, regardless of their quality, Japanese products tend now to miss out on the global arena unless sourced by “insiders” like Cheung, who spent time in Tokyo developing fluency in the language and learning to adjust the country’s cultural norms.

Despite these setbacks, however, Cheung is adamant that Japanese designers continue to lead the way when it comes to bringing out products of unique and enduring craftsmanship. He says that the Hong Kong designers that he likes to represent in his store are ones who have the depth and attention to detail that typifies Japanese design.

“When the Japanese are interested in something, they go into a lot of detail,” he says. “Like if they study Levi jeans, they’ll know everything about how the brand developed from World War II to now.” This is what he appreciates most about Japanese designers. Cheung likes modern design that contains within it deep narratives that imbue their products uniqueness and resonance.

To labour his point, Cheung takes out a pristine, farm-themed tin pencil case that has a ruler with an edge cut into shapes of animals. It has an elegant strangeness about it that recalls writer Haruki Murakami’s serene and surreal worlds. “Maybe this is something a little bit useless,” he says. “But I like how it has a story”.