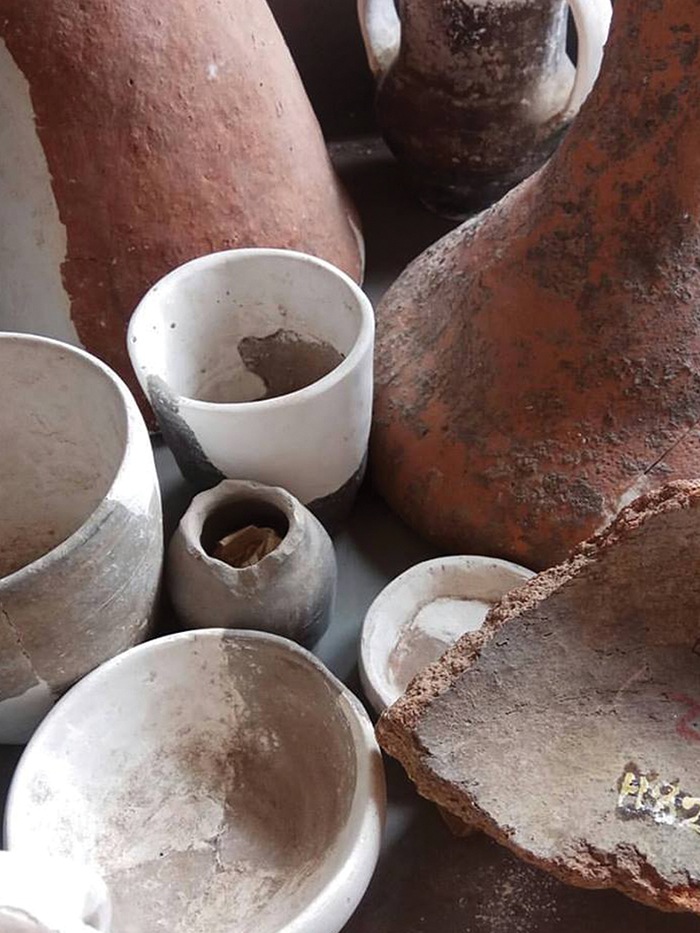 5,000 year-old beer funnels and other vessels discovered in Shaanxi province Finalising the handle before making the production moulds Supplier to the Chinese imperial courts, porcelain produced in the Jiangxi city of Jingdezhen remains as highly regarded now as it was during the Ming and Qing dynasties, with many leading ceramicists – including Hong Kong’s Latitude 22N – choosing to produce their wares there.

Billed the Porcelain Capital due to its kaolin clay, which is capable of producing paper-thin pieces considered to be of the highest quality in all of China, the city’s importance as a ceramics centre cannot be overstated; it has been producing pottery since the Han Dynasty (206-220 BC). It wasn’t until the 14th century, however, that a porcelain bottle produced in Jingdezhen reached European shores, after which the city began to mass produce its signature blue and white porcelain pieces, painted using imported cobalt from Persia.

By the late 16th century, the Medici manufactory in Florence experienced some success replicating Chinese porcelain, which was followed in the 17th century by the establishment of many European porcelain manufacturers that are still active today. The Sèvres manufactory in France was established under Louis XIV, while the Meissen factory in Germany was set up by Friedrich Bottger, who discovered in the early 18th century the secret techniques behind hard-paste porcelain manufacture in Jingdezhen. The ubiquitous Willow pattern, popularised in England during the latter half of the 18th century, was also inspired by Jingdezhen’s blue and white wares and remains in production to this day.

Blue and white porcelain remains highly prized by collectors of antique ceramics globally. A rare Ming dynasty winecup fired in Jingdezhen’s imperial kilns, referred to as “the chicken cup” for its decorative cocks, hens and chicks, made headlines when Chinese collector Liu Yiqian, owner of the Long Museum in Shanghai, bought it for HK$281.24 million at a Sotheby’s auction in Hong Kong in 2014.

5,000 year-old beer funnels and other vessels discovered in Shaanxi province Sensing a global trend for good quality porcelain, Latitude 22N set up in Hong Kong in 2008 and began production in Jingdezhen soon after. Founders Julie Progin and Jesse McLin make regular trips to the Chinese ceramics hub, where some of their time is spent overseeing production for Hong Kong clients, including craft brewers Moonzen. The partnership is a good fit: like Latitude 22N, the brewery is another local business that draws on Chinese history and culture. The name Moonzen is a translation of the Cantonese phrase mun4 san4 (門神), meaning “door god,” and its range of beers reflect this heritage. Moonzen recreated a 5,000-year old Chinese beer recipe following the discovery of a prehistoric Chinese brewery by the Shaanxi Provincial Institute of Architecture at the Mijiaya archaeological site in the northwestern province of Shaanxi.

“Most craft breweries are looking forwards, not backwards,” says Moonzen brewmaster Laszlo Raphael, who established the brewery with his wife, Michele Wong, in 2014. “They want to make the most hoppy, or extra sour beers. While there’s nothing wrong with that, there’s always a cultural connection with our beers.”

Finalising the handle before making the production moulds After reading an article that anthropologists had excavated ancient beer funnels and other vessels at Mijiaya, Raphael felt he should attempt to recreate this ancient brew. The earliest examples of brewing are usually associated with Mesopotamia and Neolithic Europe, but this finding proves China was also developing beer around the same time. An integral part of creating Moonzen’s Mijiaya beer, made from ingredients including broomcorn millet and job’s tears, was crafting an appropriate vessel for this wholesome, grainy beer to be drunk in. “Back in those days, there was no glass, and we wanted to be authentic, so we’ve paid homage to those past pots with a modern interpretation,” says Raphael.

Latitude 22N created two one-litre drinking vessels for this historic project, and while they are modern and elegant in design, Raphael feels they are imbued with a sense of history, thanks to their use of Jingdezhen porcelain. One of the pitchers is tall, while another is short and stubby, and the colours chosen were black and white. “We created two prototypes and were going to go with the one we liked best, but in the end we decided to go with both as we liked them so much. It’s definitely what we visualised,” he says.

Limited to just 100 pieces, the beer and pitchers will be released for sale on May 4, with all proceeds going to a special foundation for ancient alcohol-related archaeology set up by Stanford University and the Shaanxi Archaeology Institute. 50 people have already pre-ordered. Raphael says this could be the first of a new series related to historical beers. Moulds are opened after the growlers were casted with porcelain slip To create bespoke porcelain pieces for clients such as Moonzen, Progin and McLin work with two brothers, Wang Guanlin and Wang Lifei. The former studied at the Jingdezhen Ceramic Institute — the only institute of higher learning in China focused on the study of ceramic arts — and spends his time travelling to Europe’s ceramic centres to learn about Western techniques, while working with foreign artists that come to Jingdezhen. Wang Lifei, meanwhile, honed his skills as a ceramicist apprenticing in various factories around Jingdezhen. “Guanlin’s universe is art, Lifei’s is production and design, so they assist us in different ways,” says Progin.

After developing the design concept, the process of bringing any collection to life begins at the Wangs’ model and mould shop, where the master model maker replicates their shapes in plaster and makes the plaster mould. After the mould is finished and dried for several days in a kiln room, the liquid porcelain is cast into the mould. The porcelain sits in the mould until the desired thickness is reached and then the excess porcelain is poured out. This will give Progin and McLin their final pieces.

After they remove the porcelain cast from the mould, it’s time to let the piece dry and remove any seam lines. Then comes the bisque firing at a low temperature of around 571 degrees Celsius to take the moisture out of the piece and make it strong enough to wash, sand and prep for glazing. A final firing at about 1,299 degrees completes the process.

Traditionally, China does one firing in the kiln while Europe does two, explains McLin. “The Chinese take raw clay, fire it, then consider it done while Europeans first do a bisque fire, take it out, then glaze it. A dry piece of clay exposed to moisture will quickly blister so you get these big bubbles, particularly if you’re doing something complex, so that’s why Europeans do a low temperature firing first. It’s much safer to do two firings as you can guarantee success and less gets thrown away. In Japan, it’s almost always two, three or even four firings and ceramicists may even sand pieces in between.” Growlers are ready for the firing From its distinctive bell-shaped Ding lamps to collections such as “Fragments,” which consists of vases that capture the break and decay of porcelain moulds, Jingdezhen has been a driving force behind Latitude 22N as well as Progin and McLin’s personal projects. The pair have witnessed many changes since they first started manufacturing their pieces in the city almost 10 years ago. Many factories that created bribe objects such as large ceramic vases or elaborately painted tiles, for example, were driven out of business by the government’s anti-corruption crackdown that took hold in 2012.

As the couple continues to document the changing face of Jingdezhen through their personal projects, they remain inextricably linked to the city – at least for now. One of the factories they work with is located in a district slated for demolition. In the midst of such uncertainty, the two remain philosophical about their future. “I don’t think we’re tied to one place – that’s why we chose our name and why we do what we do,” says McLin. “We’re curious to see what’s happening in other ceramic centres with history and explore different clays and different techniques.”

It’s not the first time Jingdezhen has transformed itself, as McLin points out. “On this trip, I came across some old black and white photos from the 1890s of sailboats on the river with wood fired ceramics studios as their backdrop,” he says. “They were beautiful pictures but of course all that’s disappeared now. But it just proves that people don’t give up. Things will change and we will have to adapt too.”