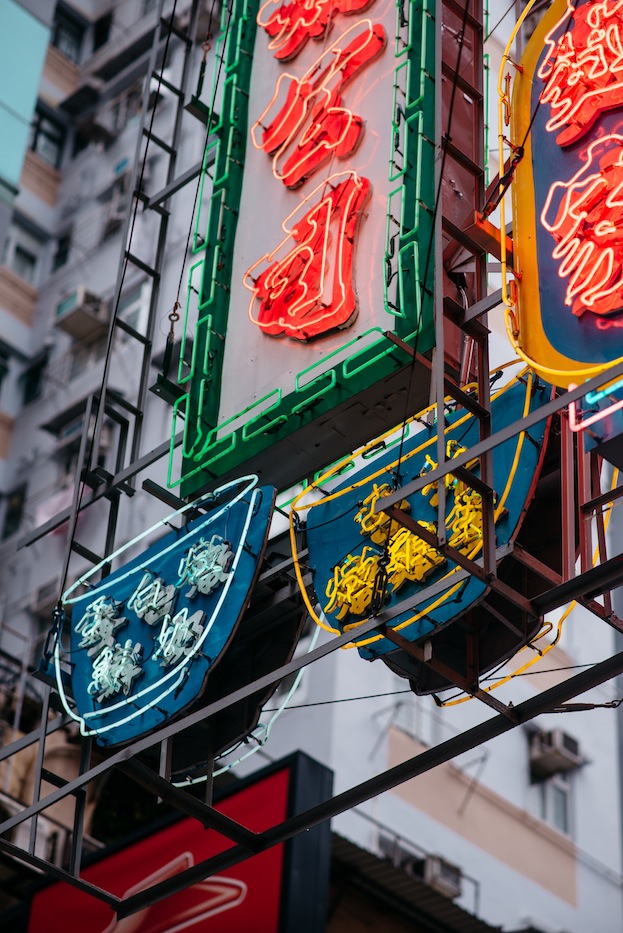 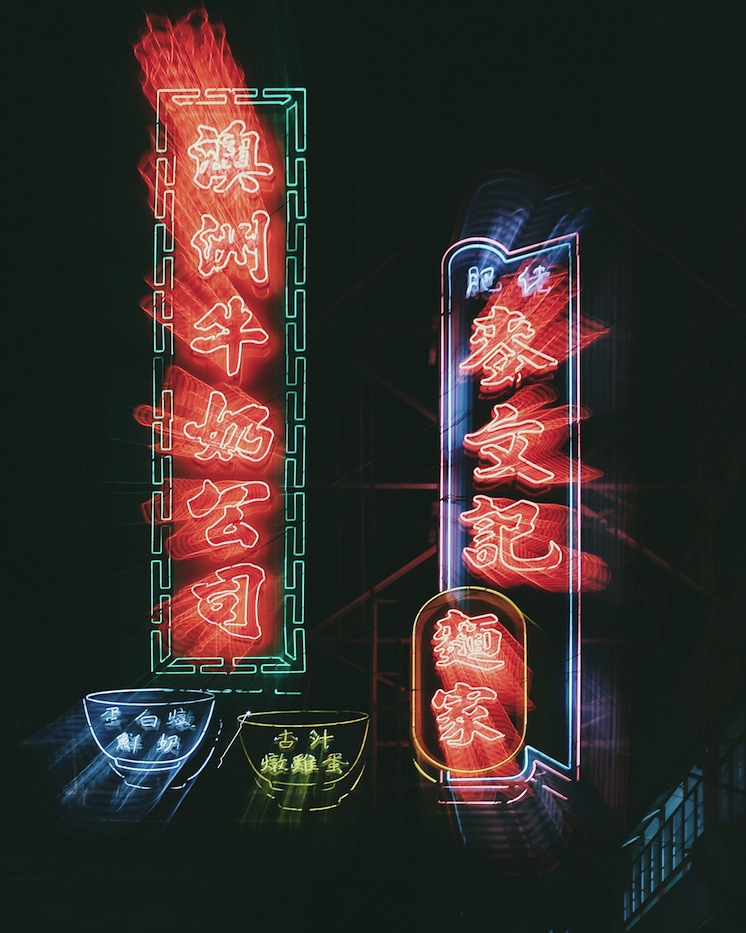 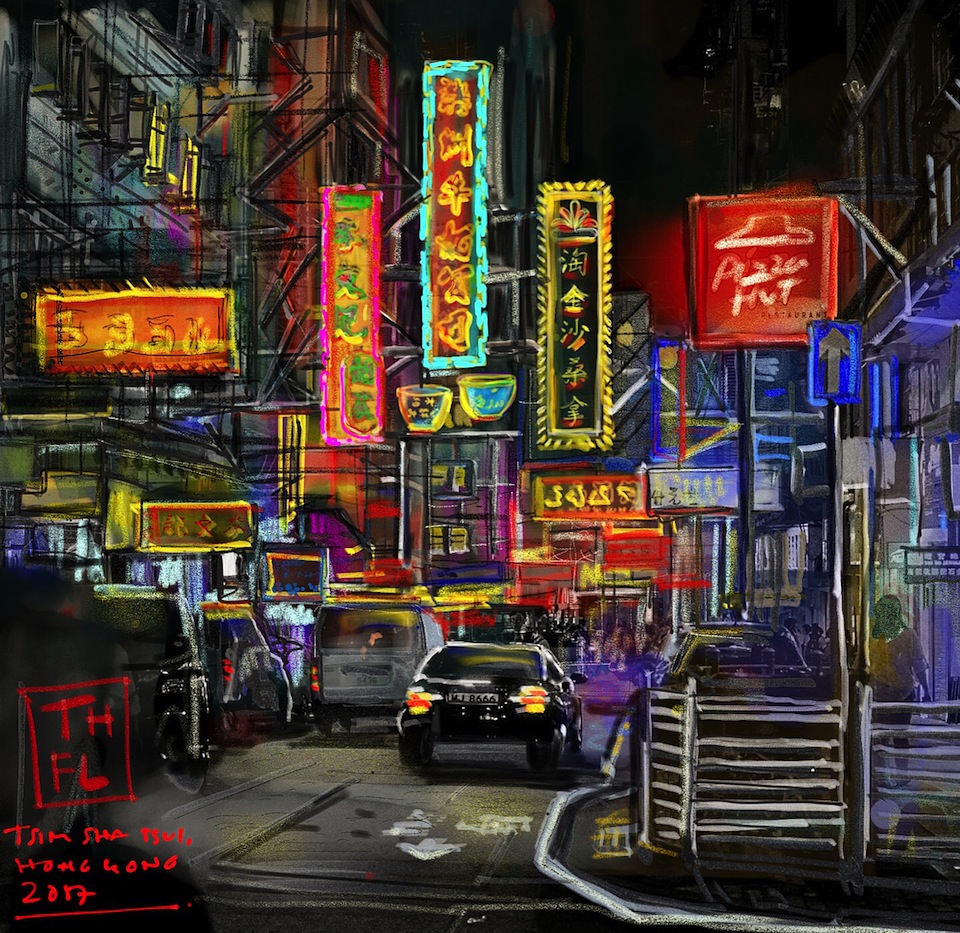 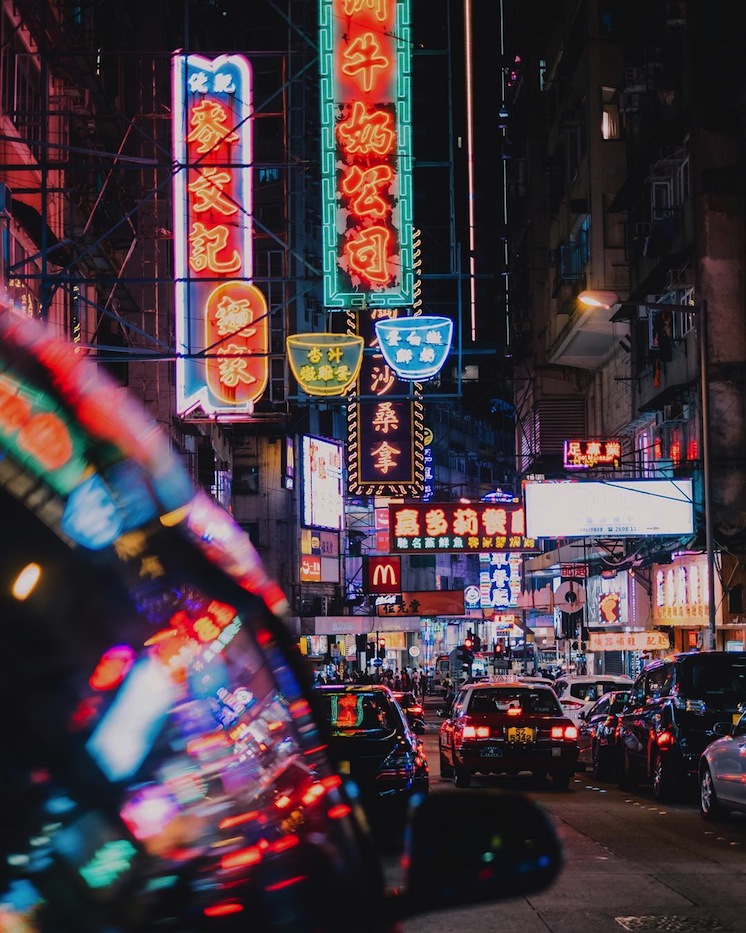 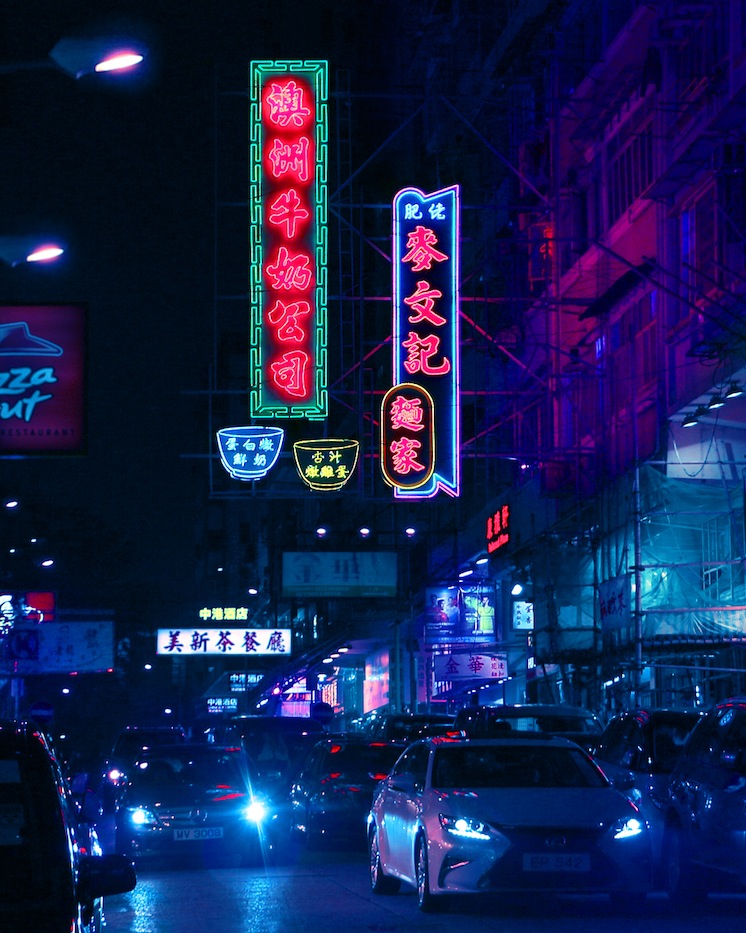 The idea of Hong Kong without neon was once inconceivable. For much of the past century, the city was filled with tens of thousands of glowing signs for pawn shops, restaurants, nightclubs and pharmacies. They thrust out horizontally into the streets, competing for space and bathing the city in a soft canopy of light. Hong Kong looked like nowhere else on earth and a big reason why was the exuberance of its streetscape. 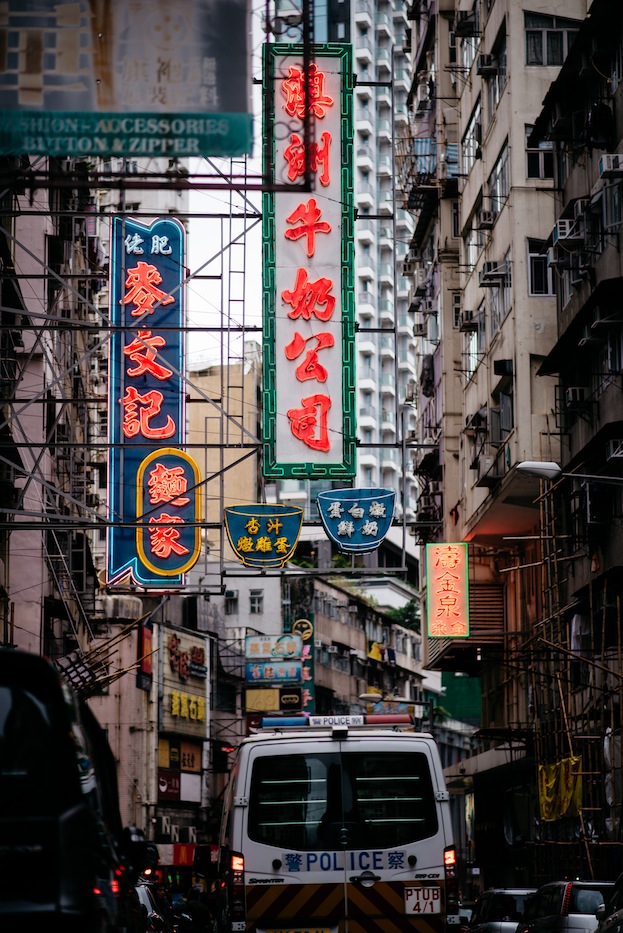 But then the signs started disappearing. It’s easy to point out the landmarks that have vanished, often to the public’s great dismay. In 2015, the giant neon cow of Sammy’s Kitchen was put out to pasture after nearly 40 years above Queen’s Road West. When Wan Chai’s famous Lung Moon dim sum parlour was demolished in 2010, its giant neon sign disappeared along with the rest of the building. Yuen Long’s Hang Heung Bakery is still going strong after 97 years, but when it was renovated its original branch a few years ago, all of the distinctive neon was stripped away.

For every one of these well-known examples there are dozens of more ordinary signs that have vanished seemingly overnight. Now another familiar sign is about to be removed. Since 1958, a luminous blue banner with red Chinese characters and yellow trim has floated above Parkes Street in Jordan, luring customers into Mak Man Kee for bowls of wontons with duck egg noodles. That’s a dish that has won the shop plenty of local fame, as well as a Michelin star in the latest edition of the French company’s dining guide. This week, however, the sign will be taken down. 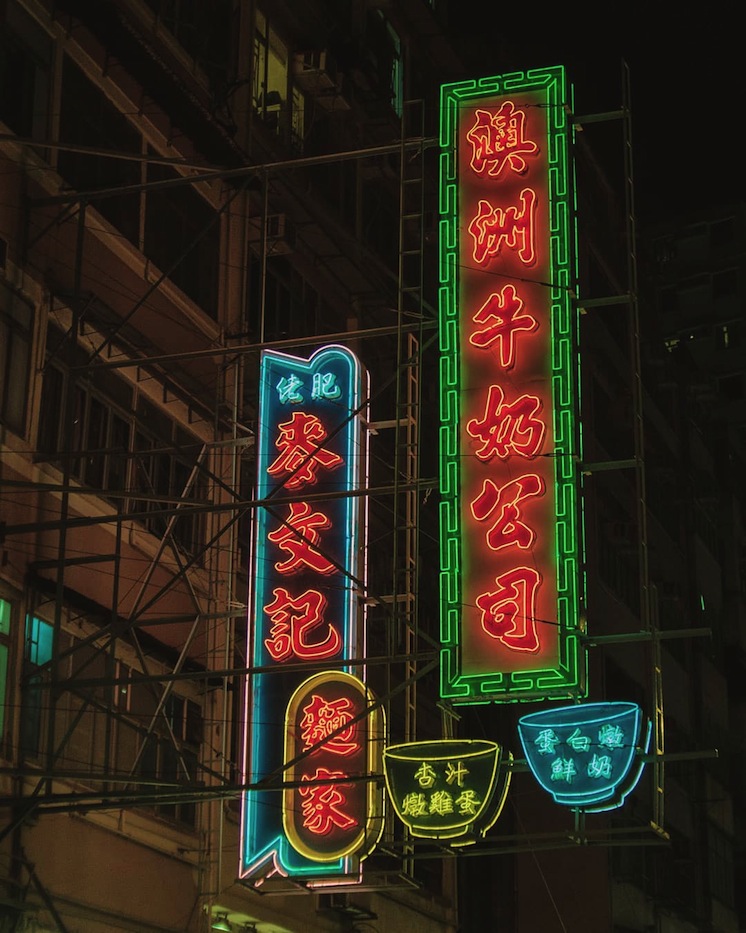 Mak Man Kee first erected a sign 60 years ago and it survived until 2003, when it was replaced with a replica that was identical except for the addition of “肥佬” (fei4 lou2, “Fat Man”), which was the nickname given to the noodle shop’s founder, Mak Man-king, by regular customers. The business is now run by his daughter, Lesley Mak, who says the family always made sure the sign was in top shape. “The sign company would come inspect the sign to fix parts of the tubes that stopped working, paint that had come off, or to replace transformers if it was necessary,” she says.

But unbeknownst to Mak, Hong Kong’s Building Departments had begun cracking down on signs it deemed too large and unwieldy. In 2014, the department ordered Mak Man Kee to hire an engineer to inspect its sign, but Mak found that no engineer would vouch for the sign’s safety because they hadn’t personally installed it. As a result, the Buildings Department demanded the sign be removed. 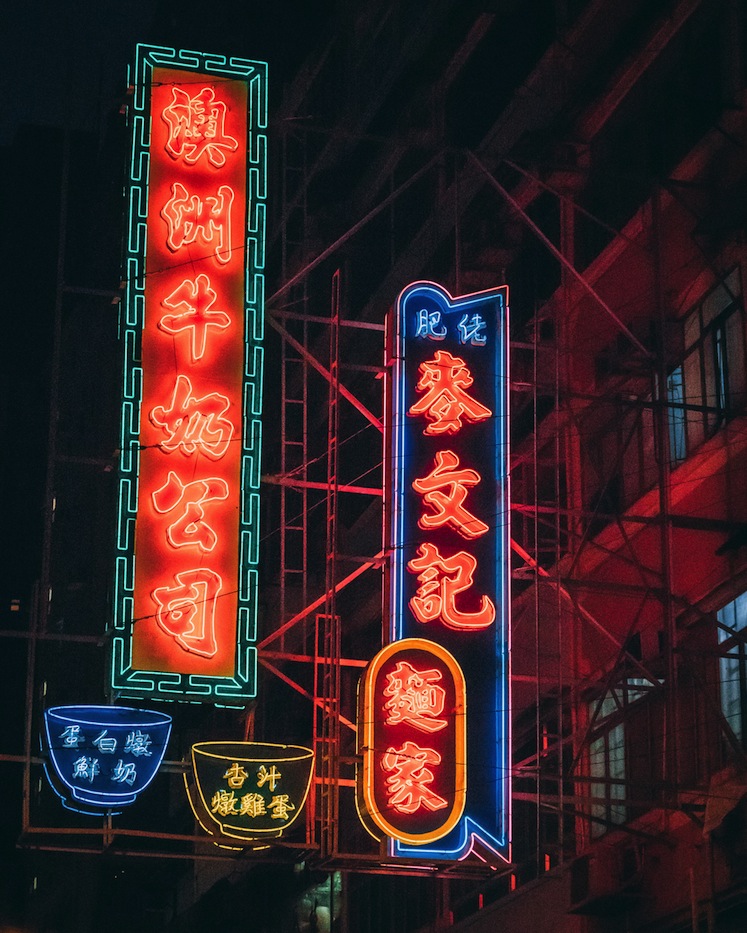 And so it must go. Mak says she doesn’t begrudge the government for enforcing its regulations, but she is perplexed by why her sign in particular was targeted. “The way the law has been enforced is confusing – the abandoned signs or [those made from wood] should have been dealt with first,” she says.

It’s an issue that goes beyond the fate of any one sign. For decades, the city’s appearance has been shaped by these handmade signs inscribed with Chinese calligraphy. Now it has been stripped naked. How will the disappearance of neon impact Hong Kong’s culture and identity? And what is lost when a city loses a key feature of its urban landscape?

It’s a question that will be answered sooner rather than later. The Buildings Department removed 2,719 signboards in 2016 alone. Many of the signs documented in the 2013 M+ museum exhibition, NEONSIGNS.HK, have now vanished. “The pace of deinstallation only seems to be accelerating,” says M+ design and architecture curator, Aric Chen. “And to be frank, I’m not sure what the rush is.” 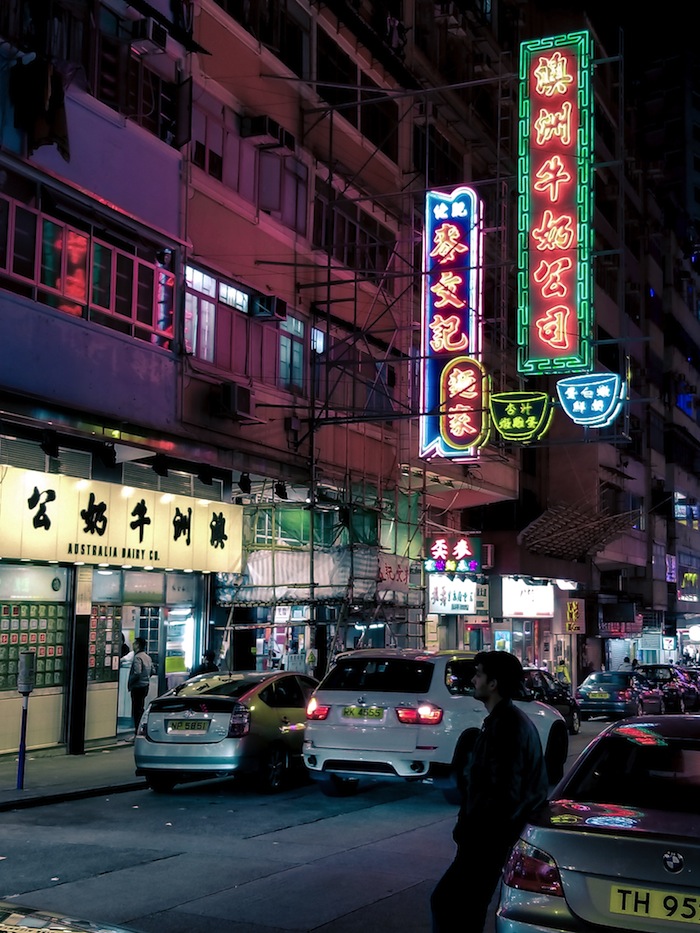 Hong Kong is not the only city to struggle with the question of neon. Vancouver had a disproportionately large collection of neon signs in the 1950s and 60s, but their numbers dwindled after the 1970s, when public taste changed and neon was increasingly seen as seedy and tacky. The city enacted new bylaws that curtailed the use of neon.

But neon signs are as much a part of a city’s heritage as its historic buildings. Eventually, after years of lobbying by activists, Vancouver changed course, and in the 2000s its government began encouraging the preservation of old neon signs and the creation of new ones. Today, the city’s downtown commercial streets once again glow with neon; even City Hall is illuminated by a neon clock.

Nothing of the sort has happened in Hong Kong, which struggles even to preserve its historic buildings, let alone accessories like neon signs. M+ has been able to save a handful of famous signs like the Sammy’s Kitchen cow, but its resources are limited. “It’s been a challenge for us to keep up — signs are taken down before we know it — and we’re always grateful when owners, members of the public, and others alert us to signs that may be coming down,” says Chen. 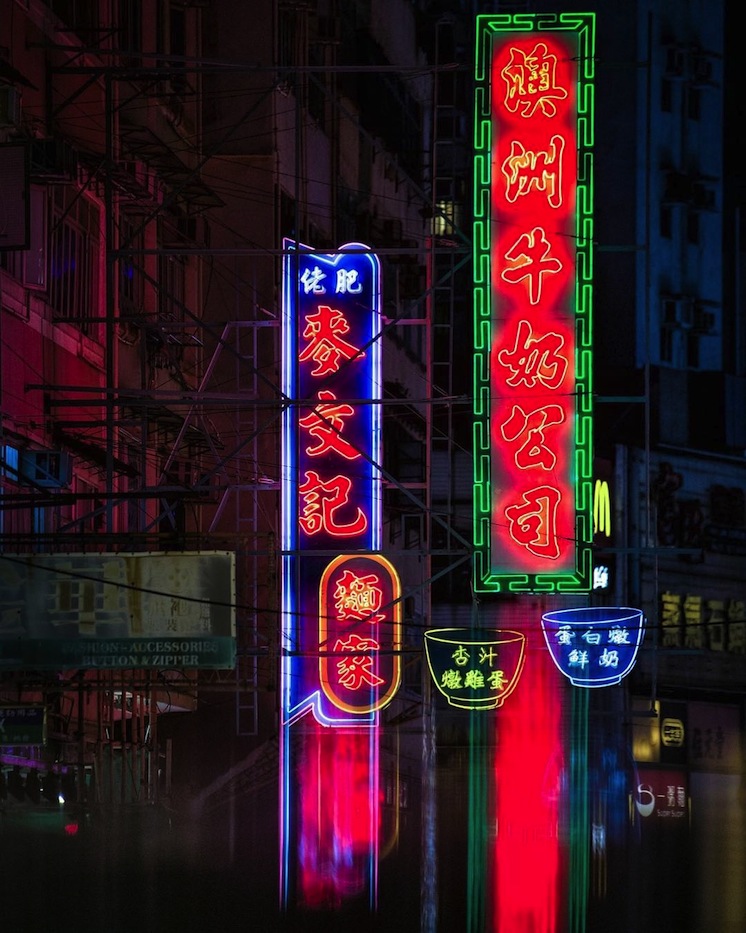 Lesley Mak hopes to commission a new neon sign to replace the one she has to remove. “It would look exactly the same, but it would be much smaller,” she says. But she thinks it will be a struggle to get a green light from the Buildings Department even for a small sign. “The building our shop is in is over 60 years old,” she says. “But we will give it a try anyway.”

This story was produced in collaboration with The Hong Kong Neon Heritage, a volunteer group dedicated to promoting and preserving neon signs and the art of neon signmaking and a group of dedicated instagrammers.