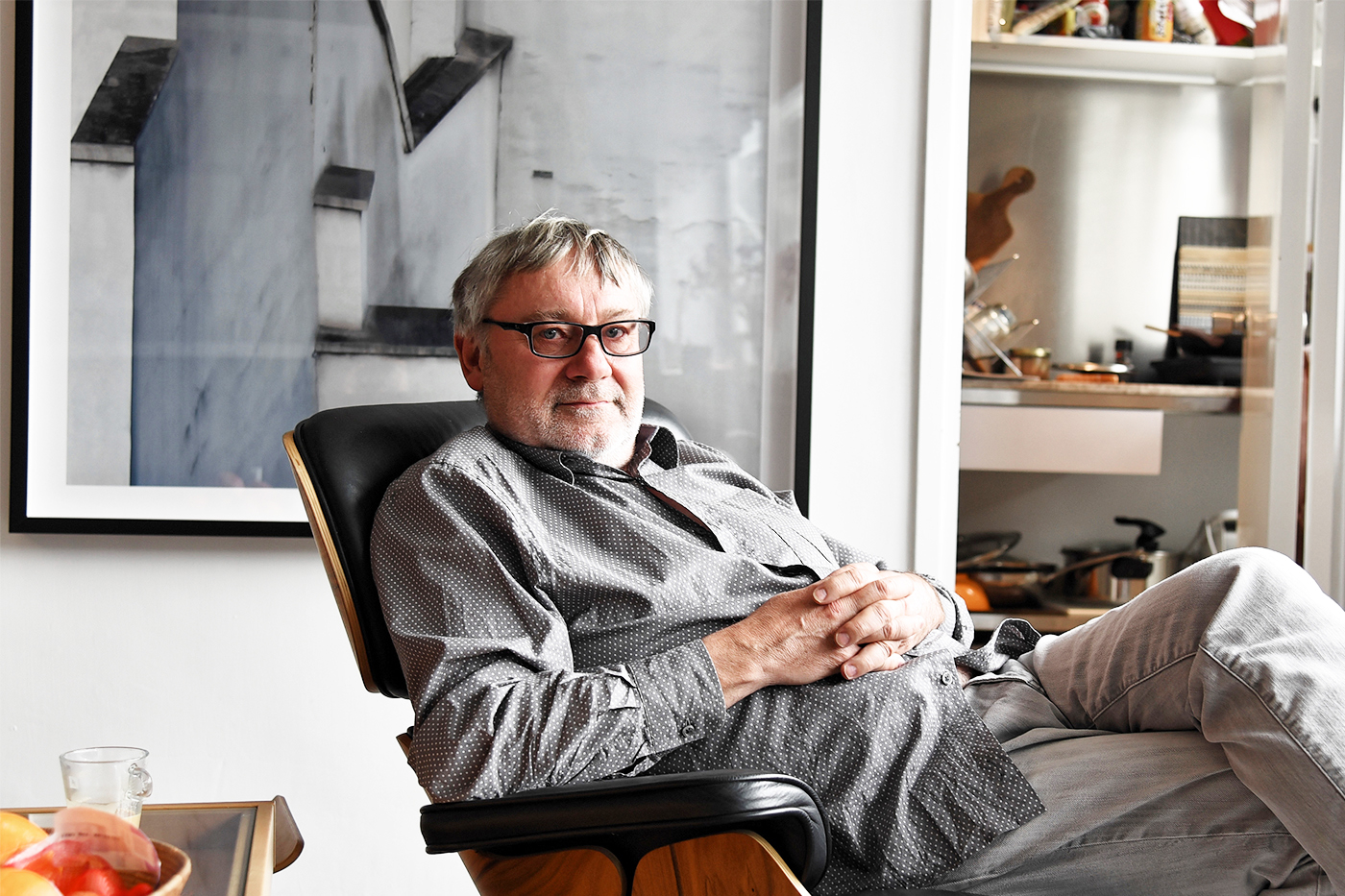 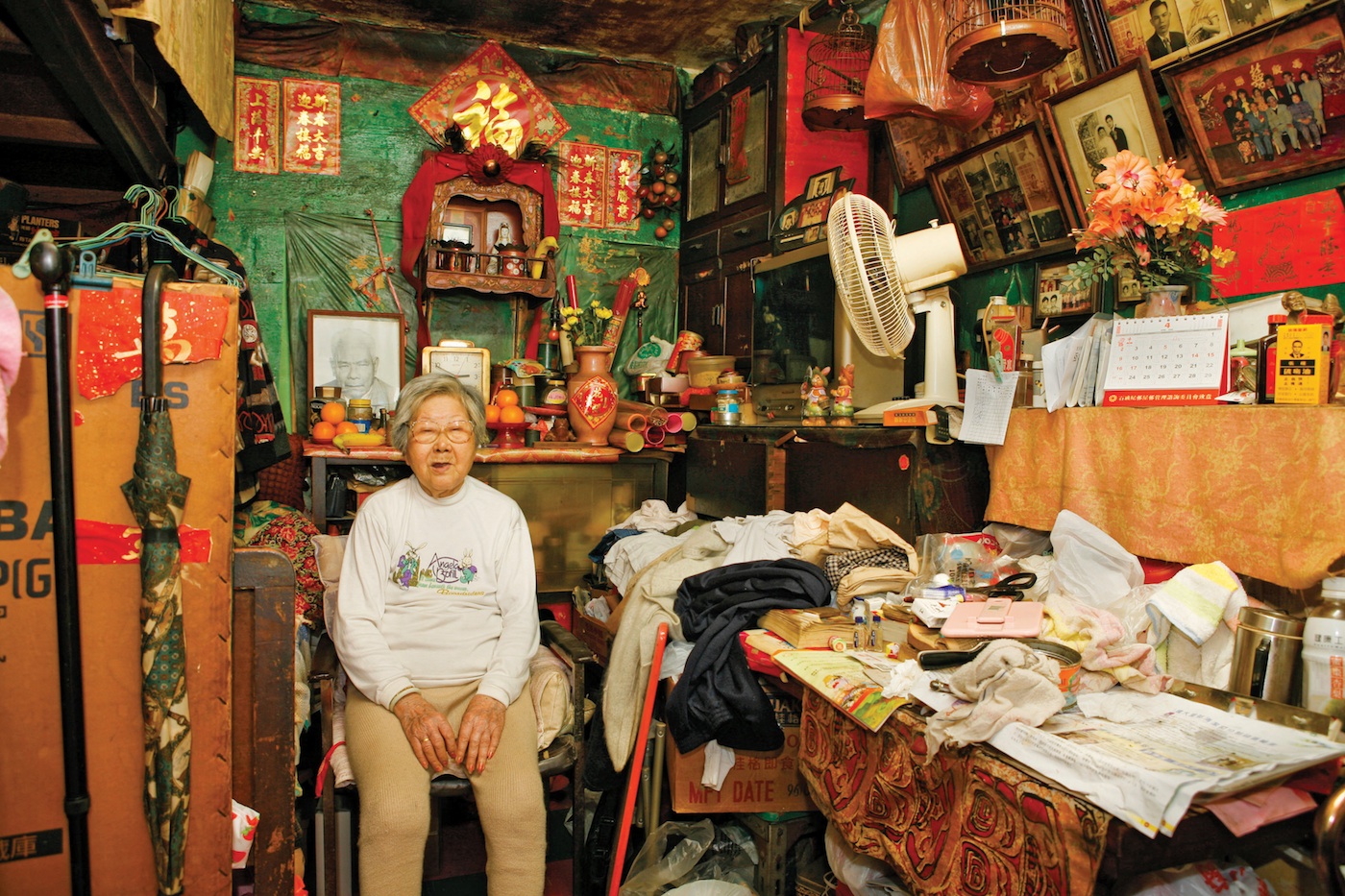 Michael Wolf reigns over a vast collection of jade stones, but he keeps only a few of them in Hong Kong. “Most of them are in Germany,” he says as he picks up one of the stones he still has in his studio in Chai Wan. Stones, pendants and little figures lay perfectly and neatly on a tray. “I polished them all. My passion for collecting is like an illness.”

If it’s an illness, it isn’t one that seems to trouble him. Wolf started to collect jade when he first came to Asia 22 years ago. Most of the time, he focuses his energy on something else: photography. Wolf is one of Hong Kong’s most renowned documentarians, known for series like “Architecture of Density,” which depicts the city’s high-rise housing estates in compositions that border on abstraction. “Photography is [also] a form of collection,” says Wolf with a smile.

Wolf’s collection of photos keeps growing. Born in Munich in the mid-1950s, he grew up in Canada and the United States. He studied at the University of California, Berkeley, and later obtained a degree in visual communication at the Folkwang School in Essen, Germany. His work has been exhibited extensively throughout the world for the last ten years and some of his photos are held in permanent collections, including the Metropolitan Museum of Art in New York City, the San Jose Museum of Art in California and the German Museum for Architecture in Frankfurt. His unusual and personal work earned him the top prize from the World Press Photo Awards in 2005 and 2010.

When Wolf first came to Asia, he worked as a photojournalist for the prominent German magazine Stern, which was originally known for its outstanding photography. His final story for the magazine, “China: Factory of the World,” marked his departure from photojournalism and his entry into the world of fine art photography. At that point, Wolf stopped collecting jade and switched to plastic toys. He eventually rounded up a collection of 20,000 pieces.

In his studio, Wolf sets down the piece of jade and picks up a plastic giraffe whose yellow has faded through the years. “I was obsessed with them,” he says. His collection of plastic toys grew along with his collection of portraits of workers making toys for Western markets. That work eventually led to The Real Toy Story, Wolf’s first major art project.

Wolf’s favourite subject is his adopted home: Hong Kong. “I’ve found my identity here,” he says. He hopes his work can do the same for others. “A lot of people know me by now and my photos make them aware of their own identity and culture. [It’s] a culture which should be preserved,” he says. That’s especially true with the dramatic pace of change in the past five years, as old buildings have been torn down and entire neighbourhoods transformed. The traditional life that one defined many of the city’s oldest districts is vanishing. “It’s a shame,” says Wolf. “Land is precious in Hong Kong. The government sells it to those who offer most for it. Money talks.“

When the owners of small shops can’t afford the skyrocketing rents and have to move out, the corporate world moves in with chain businesses. “Change is going to happen,” says Wolf. “But I am against it. I don’t want gentrification. That’s what I am fighting against. I am a traditionalist.“ He laments the rapid pace of globalisation. “What is the world coming to when all is looking the same everywhere?“

Wolf’s own life is low-key. He gets lunch at a noodle shop around the corner from his studio. “That is authentic, that is good. And cheap,” he says. “What is wrong with being thrifty? My grandmother experienced two world wars and lost everything two times. She taught me that money doesn’t make you happy,” he says. For many Hong Kong people, being thrifty is not a choice – it’s a necessity. Wolf mentions his assistant, with whom he has worked for 20 years. “I pay him well, but he still knows where you get the cheapest rice in the city,” says Wolf. He is fascinated by the art of survival in a megacity like Hong Kong, where the gap between rich and poor is growing ever larger. “Most people have very little, so they have to be very thrifty and creative. They throw nothing away, not even a little thread.“ Colourful plastic ribbons are the cover photo for his latest book Informal Solutions: Observations in Hong Kong Back Alleys. It is another contribution to Wolf’s already long list of photography books — he has published more than 20 — which try to capture the socio-cultural character of Hong Kong’s urban environment. 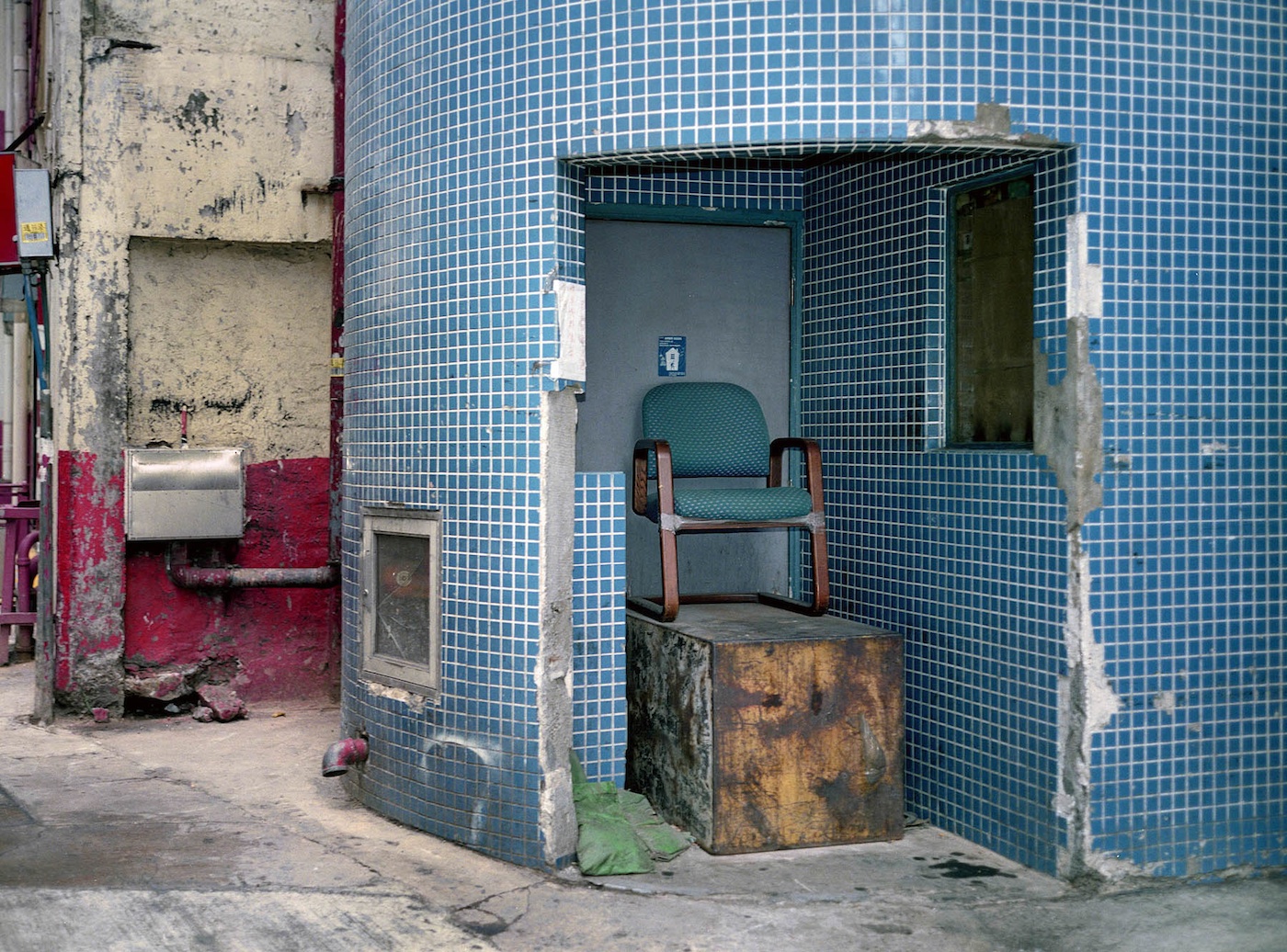 For years Wolf has been wandering through Hong Kong’s back alleys. He didn’t plan to embark on any particular project; he just went there to discover and experience the hidden life of these concrete constructions. “I am a curious person,” says Wolf. And there is a lot to be curious about. People in Hong Kong don’t have a lot of private space, so they use any space they can find, including back alleys as an extension of their apartments: to hang up clothes, to store things, to wash dishes – and to relax. “I am walking a lot, so when I get tired I go to a back alley. There is always a chair I can sit on and rest.” Sometimes he buys the chair. “I always give HK$500.” People ask him if he is crazy.

Some of the chairs he bought are now in his studio, lining the walls. Small plastic stools, wooden chairs, chairs with a cushion made out of a plastic bag filled with a piece of foam, a chair holding an umbrella against the threatening sun. It’s a new set of items that serves two of his addictions: collecting and showcasing Hong Kong culture. The world of the back alleys is where time has come to a standstill, where Hong Kong seems to connect with an elusive yet genuine past.

For more information on Wolf and his work, visit photomichaelwolf.com. His new book Informal Solutions was released in January 2016.

Renowned photographer Michael Wolf is a compulsive collector – and nothing is more coveted in his collection than the ephemera of Hong Kong's everyday life.