A passerby stops in front of a humble-looking tuck shop on a sleepy part of Queen’s Road West and makes a request: “An egg tart, please.” Laced with the delicious aroma of freshly pastries, this emporium of baked goods looks a lot like any typical local bakery. But buns, cakes, cookies and tarts are nowhere to be found. Instead, Adam Sham, second-generation owner of the shop, is flipping chewy, slightly toasted pancakes on a griddle. “We don’t have egg tarts,” one of the staff tells the passerby. “This is a Chinese snack shop.”

This is Coek3 Jyut6 Sik6 Ban2 Beng2 Dim3 (卓越食品餅店), whose name translates to Excellent Food and Snack Bakery. Unlike Hong Kong-style bakeries, which sell Western-inspired baked goods with a local twist, Chinese snack shops like Sham’s only sell puddings, pastries and snacks, mostly of Chinese origin. They are usually small, family-run – and increasingly hard to find.

Before pineapple buns and other local treats became a staple for Hongkongers, Chinese puddings and pastries were a quick fix for the masses. The destruction of World War II, followed by civil war in mainland China, unleashed a flood of refugees into British-ruled Hong Kong. Between 1945 and 1951, the colony’s population grew from 600,000 to 2.1 million. These refugees brought with them their hometown recipes and many made a living by selling their snacks on the street. Up to 300,000 hawkers plied their trade on the streets in those postwar decades. Most were pushed indoors after stricter controls on street vending were introduced in the 1970s. Snack stalls found refuge in small commercial spaces that opened directly onto the street.

Not all the Chinese snacks are sweet, but when they were brought to the Guangdong region, including Hong Kong, either mostly the sweet ones survived, or the original recipes were modified for the sweeter taste of Guangdong people. Sham says most of these snacks are made with cane sugar, which was introduced to southern China in the third century BC and had a huge influence on its culinary practices. 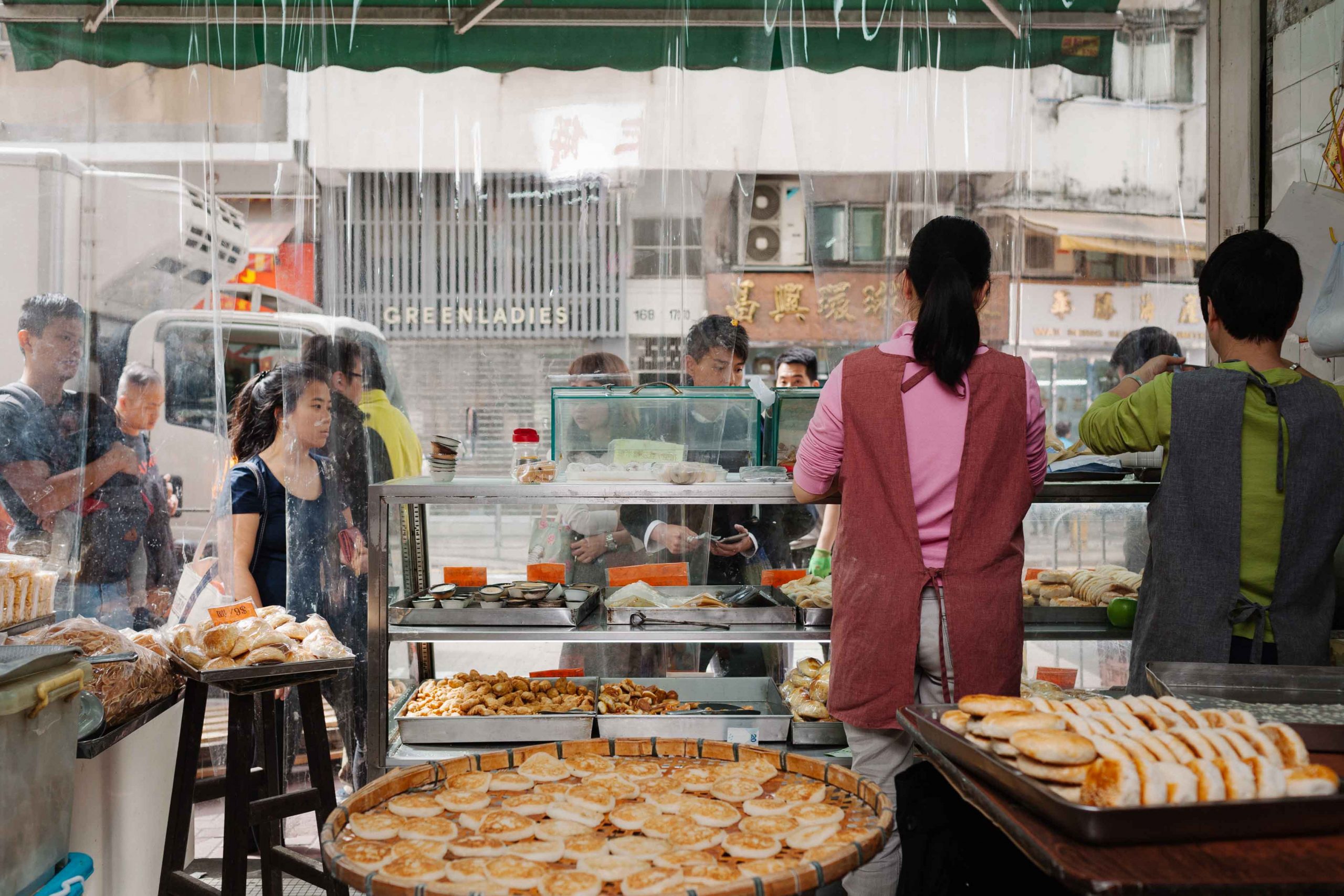 What used to be very popular, but less favoured nowadays, were little chicken biscuits (gai1 zai2 beng2 雞仔餅). They are baked lard pastries filled with eggs, frozen pork, walnuts, peanuts and sesame, and seasoned with fermented bean curd. Sweet and savoury, the biscuits were first created by Seng4 Zyu1 Lau4 (成珠樓), a teahouse founded in 1746 in the Haizhu district of Guangzhou.

According to lore, the biscuits owe their existence to the teahouse owner’s maidservant named Little Phoenix, who was asked to serve some dim sum to a few guests. But the chef had left his station. She improvised by folding some leftover meat and pickled vegetables into small balls of irregularly shaped pastry dough. The resulting pastries had a pleasing balance between sweet and savoury flavours and customers were hungry for more. In honour of the employee who created them, the teahouse owner dubbed them “little phoenix biscuits” (siu2 fung6 beng2 小鳳餅). Phoenix is the more poetic term for chicken in Cantonese, which is why the biscuits are more commonly known today as little chicken biscuits.

Another popular snack is earthen bowl red bean pudding (but3 zai2 gou1 缽仔糕), a sweet tea cake (tim4 caa4 gwo2 甜茶粿) that dates back to the Qing Dynasty (1644-1912). Tea cakes are a practical snack traditionally made by Hakka people, who mix white or glutinous rice milk with the pressed juice of Chinese fever vines, which Hakka people use as a painkiller. Peanut and white sugar are added to the sweet version of the cakes; black-eyed peas, shredded white radish or pork to the savoury one. The batter is then steamed on small square pieces of leaves to create sticky, chewy and round delights. They are especially popular during Ching Ming Festival, when it is a Hakka custom not to cook with fire but to consume only pre-cooked food. Snack hawkers adapted the recipe by discarding the unwieldy leaves and using small earthen bowls to steam the cakes instead. 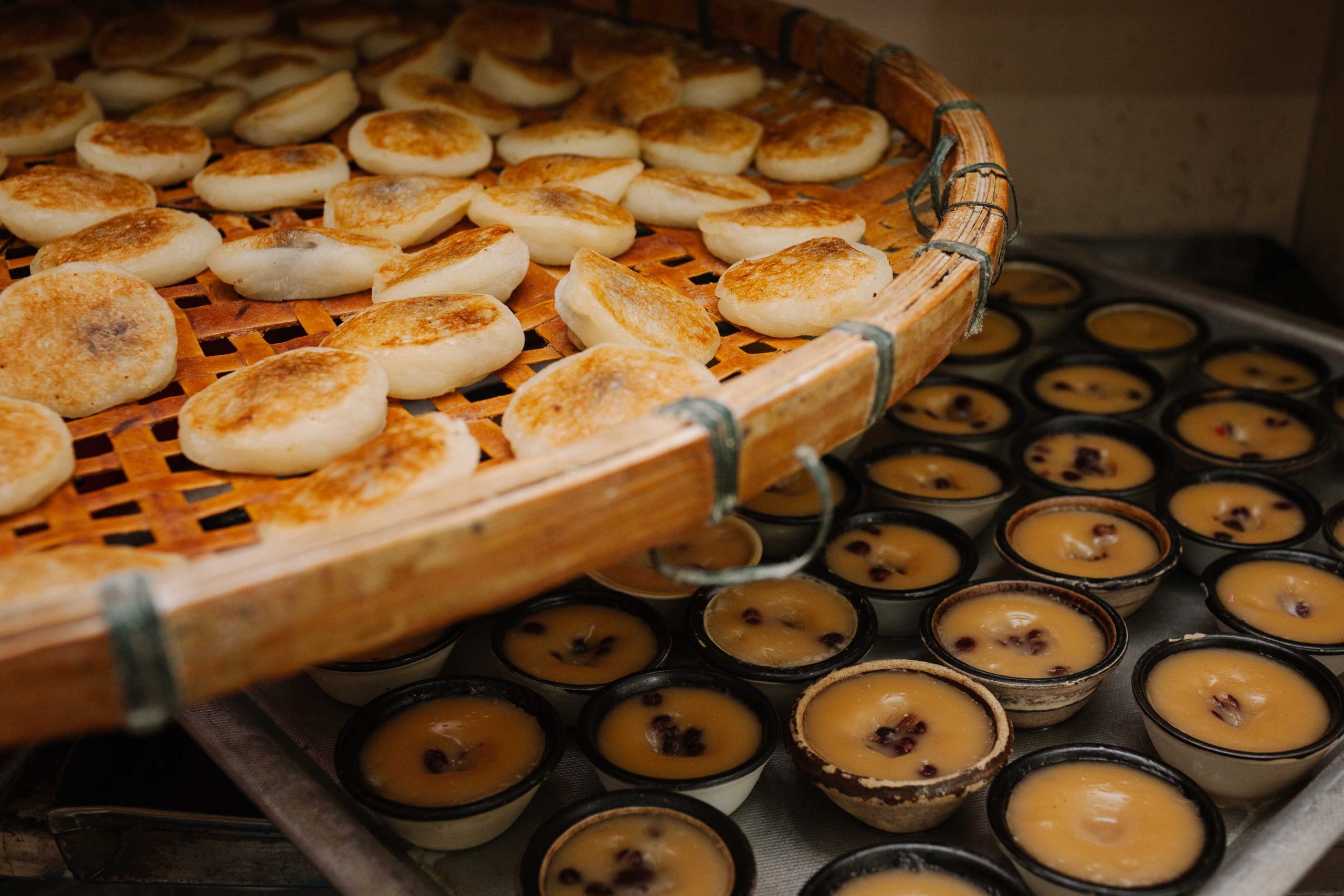 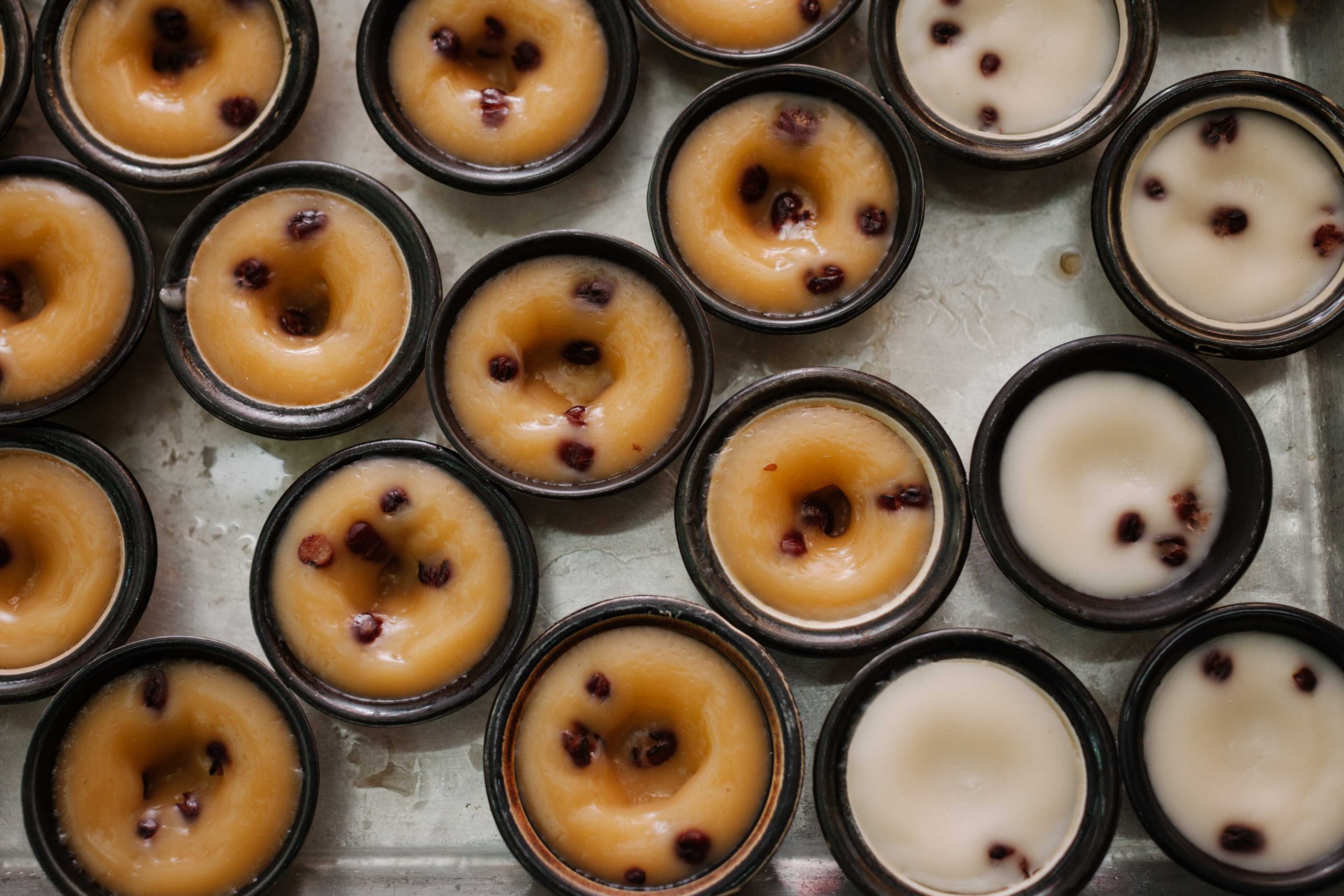 According to the story, the shop originally sold congee and Chinese cakes. One day, Liang had a heated argument with his wife about business and decided not to continue with the business. He stormed out of the shop, leaving behind a batch of ingredients in the kitchen, including some white rice milk for making plain Chinese steamed sponge cakes. When he returned the next day, he discovered that by adding sugar and fresh white rice milk to the stale white rice milk, the steamed cake had a smoother, more solid texture with a clearer sweet taste, more air holes and glossier surface. The rice milk had begun to ferment, giving the cakes a distinctive hint of sourness that is evocative of rice wine. This unique taste made the cake very popular in Foshan, where the shop is still located, and the recipe has spread throughout the Pearl River Delta region. 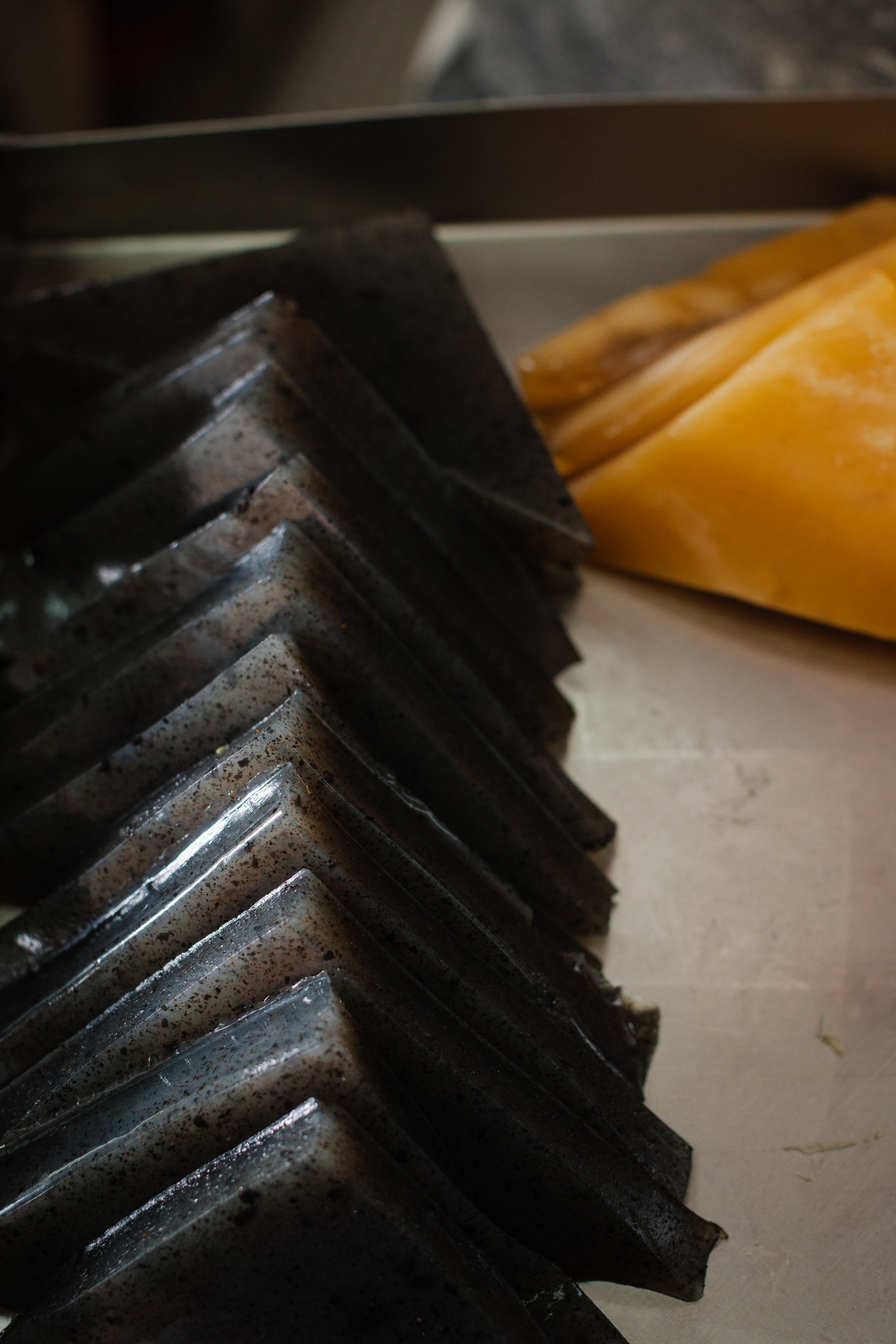 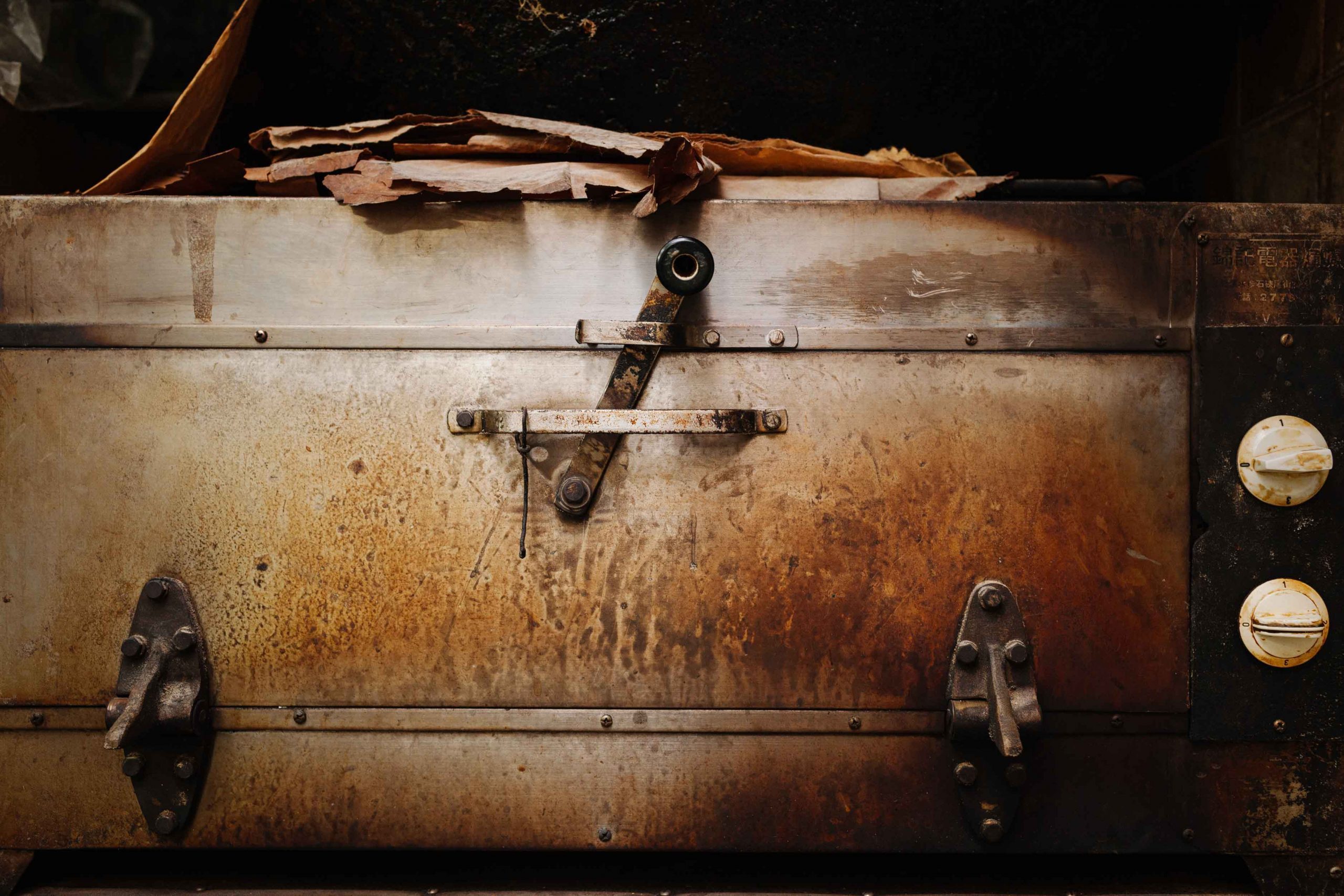 Oven in the pantry 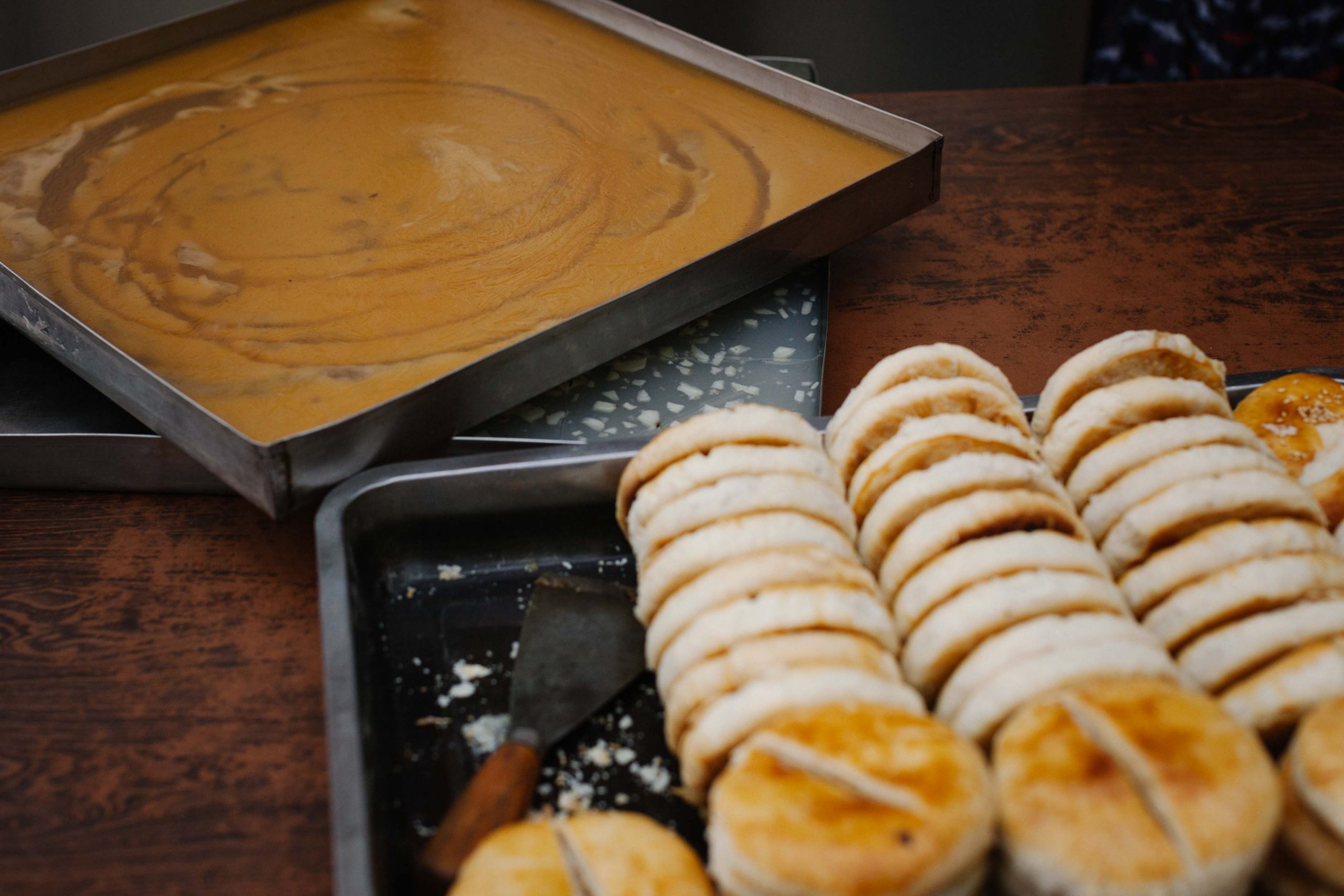 Sesame pudding (zi1 maa4 gou1 芝麻糕) is a fusion of two Cantonese desserts – sweet sesame soup and water chestnut pudding. Dating back to the Tang Dynasty (618-907), water chestnut pudding is only eaten during Chinese New Year, whereas sweet sesame soup is available all year round. Cantonese people enjoy the jelly-like texture of the pudding and the aromatic flavour of the sweet soup so much so that they blended the two together. To make the pudding, sesame seeds are stir-fried, ground and steamed before being mixed with white sugar, water and tapioca starch flour. The outcome is a rich, nutty pudding, served cold, that melts in the mouth. It’s uniquely Cantonese dish that is different to sesame pudding in other regions such as Sichuan, where they are dense, firm and chewy in texture due to the use of glutinous rice flour. 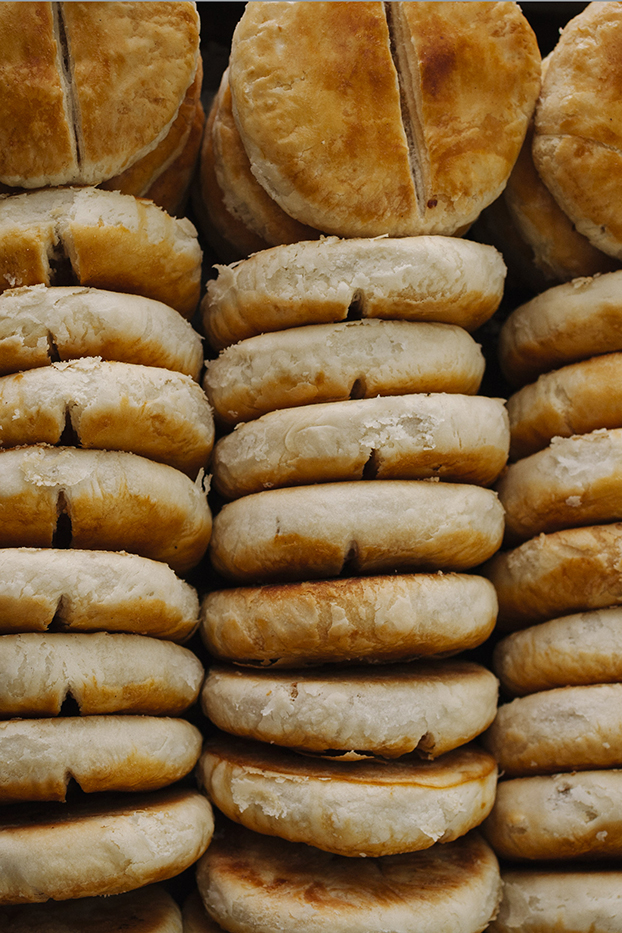 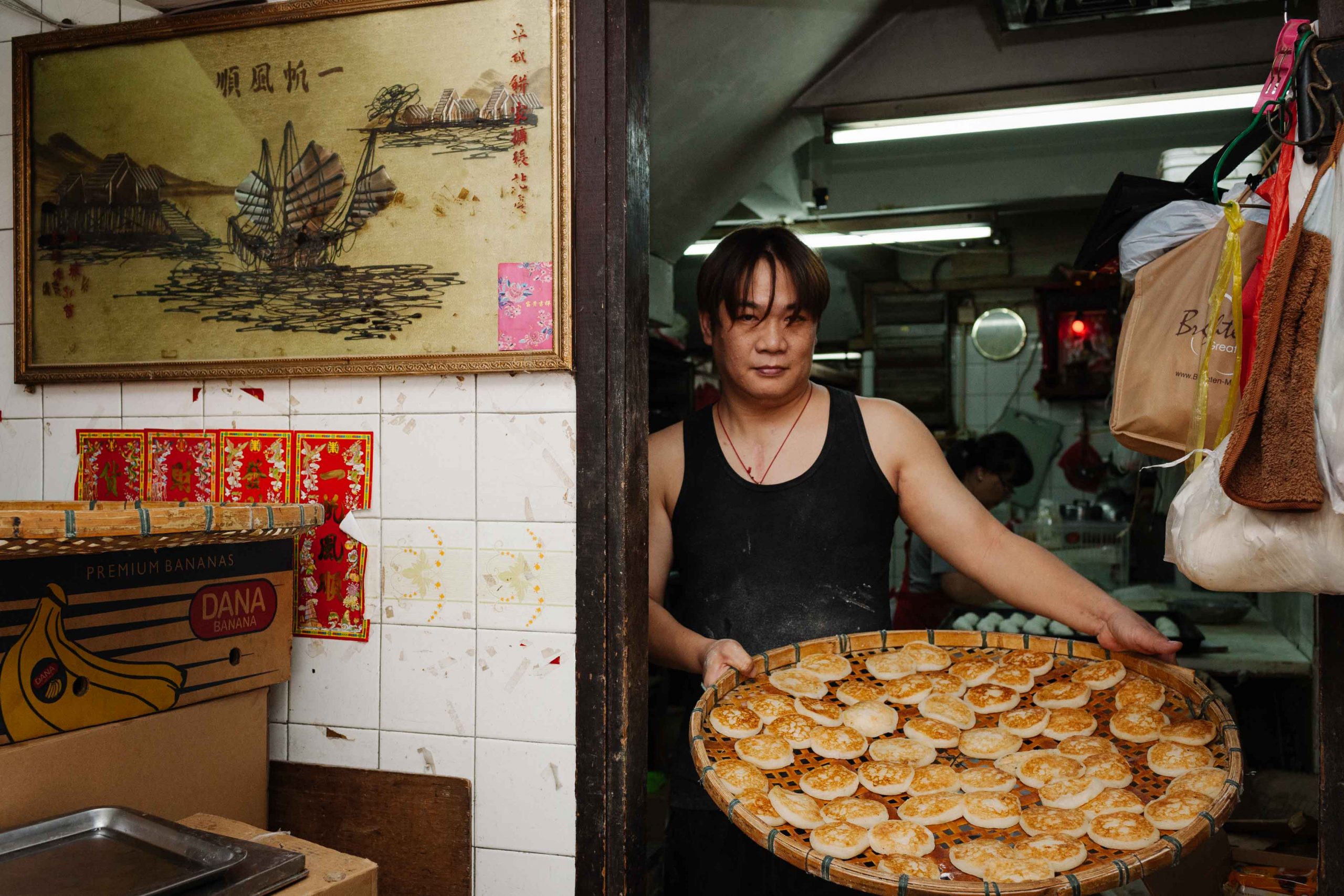 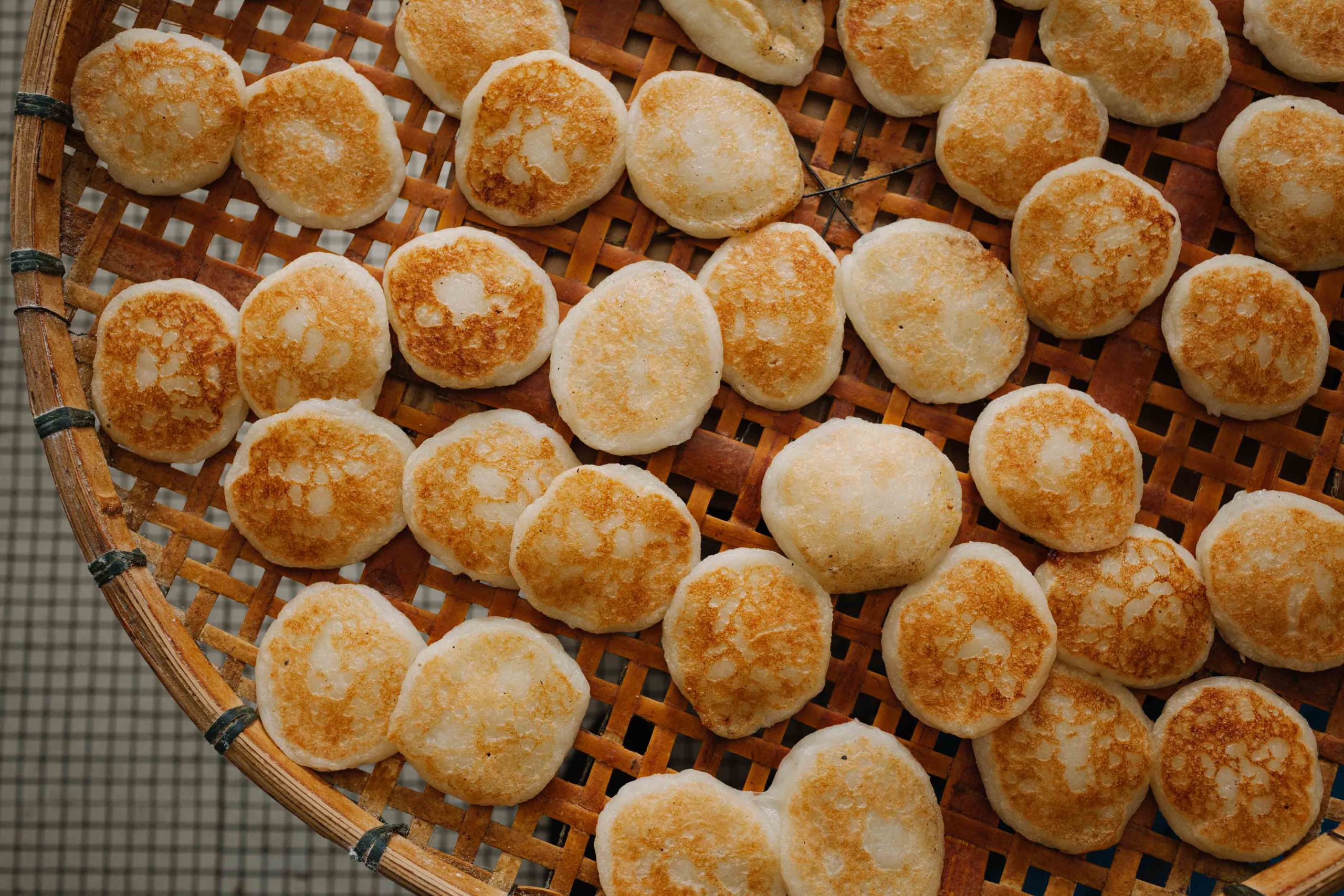 Red bean paste pancakes (dau6 saa1 siu1 beng2 豆沙燒餅) are chewy, round glutinous rice cakes filled with red bean paste. Pancakes were introduced to China from its western periphery during the Han Dynasty (206 BC-220 AD), and they were a popular street snack in the Tang Dynasty. Over the years, they spread to other regions and were modified. Different places in China have their own versions of pancakes that vary in taste, shape, colour and filling. All share the same cooking method however: the soft cake has to be baked with a hot pan with a generous glug of lard or oil on both sides to give it a golden, crispy crust.

Hong Kong’s pancakes are most similar to Yellow Bridge pancakes, which have been a delicacy of Huangqiao (“Yellow Bridge”), a town in Jiangsu province, since the Song dynasty (960-1279). They were made famous in the 1940s during the Battle of Huangqiao, when the pancakes were fed to frontline soldiers. Both the Jiangsu and Hong Kong recipes involve kneading the dough with warm water to make the pancakes chewy, but the pancake dough in Hong Kong—where rice is a staple—is further enriched with glutinous rice flour, as opposed to wheat, which is consumed in northern China. This gives Hong Kong pancakes a translucent colour and extra chewiness. And perhaps due to Hong Kong’s preference for sweetness, only the red bean paste version instead of the savoury ones became common here. An assortment of old-style snacks

Each of these five snacks brings back memories to Sham, who spent his youth testing out his uncle’s snacks before taking over the family shop in 1997. “They were my go-to snacks when I was a school boy,” he recalls. “I didn’t have as many options as my daughter does nowadays.” Hong Kong-style bakeries, as well as modern dessert and drinks places, now dominate the city’s snack landscape. But Chinese snacks have been around for centuries – and there are still enough snack shops to give you a taste of these timeless treats.

We trace the origins and timeless flavours of five old Hong Kong snacks.