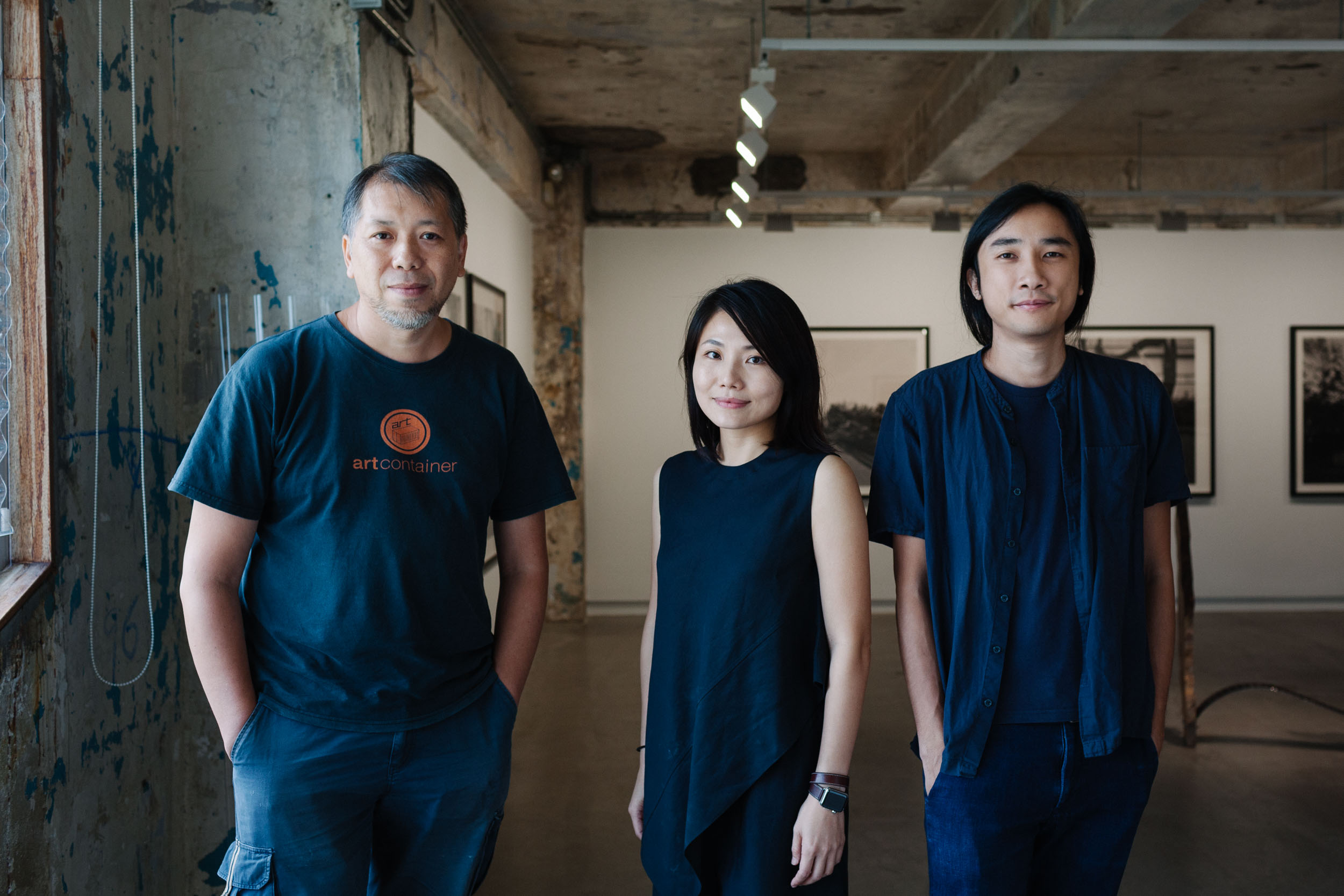 Art openings are usually rather staid—the most that can happen is someone spilling fizz—but the opening of the latest exhibition at Blindspot was a surprisingly haphazard affair. On one end of the space, unsuspecting viewers were stepping on cockroaches while being yelled at by a security guard. On the other end, someone ducked behind a glass shield to take cover from a barrage of flying (but gorgeously-hued) soft rubber pellets. Altogether, it offered some much needed humor amidst the protests that have become what many pundits are calling Hong Kong’s biggest political crisis since the 1997 handover. Two Hong Kong artists can be thanked for this mordant humour: Luke Ching and South Ho, whose double act, Liquefied Sunshine|Force Majeure, runs until 2 November. At a time when many commercial galleries shy away the protests, both Ho and Ching are responding to the upheaval, either directly or indirectly.

“As a gallery, we don’t take a specific political stance,” says Blindspot founder Mimi Chun. “But as a gallery, one of our biggest functions is to support artists regardless of what they are trying to express. I also think that contemporary art is art that responds to the times. We work with many Hong Kong artists so it’s only natural that the city comes through in their works.”

Blindspot had exhibited Ho for a decade but this is the first time it has worked with Ching. “It makes sense to put Luke and South together because both their art engage with the social as well as political,” says Chun. Both have their ear to the ground, with South involved in Sham Shui Po community art gallery 100ft Park and Ching active in local labour movements. Liquefied Sunshine|Force Majeure are separate shows, but when seen together, they highlight how artists are responding to the Hong Kong protests in different ways. The exhibition is testament to how prescient art can be; many of the works on display were created years before the ongoing protests yet are deeply relevant to the ongoing protests.

Ching’s show takes its name from one of its works, “Liquefied Sunshine,” a massive collage consisting of hundreds of Hong Kong and Taiwanese postcards where the key visuals have been covered with vigorous blue strokes. Postcards fascinate Ching. “They’re always in the same format, and humans are never part of the focus,” he says.

He also takes issue with how they depict the weather of their chosen location. “It’s always sunny!” he exclaims. “The postcards from Manchester are all sunny, but I was there, it was raining dogshit every day. I felt fooled.” Ching’s blue marks represent rain, which he drew on the postcards until their sunny landscapes receded into the background. The picture-perfect landscape makes way for other elements, something that brings to mind what is now happening in Hong Kong. “Hong Kong had always been defined by our skyscrapers, but in the past three months, the cityscape is defined by the masses of protestors on the streets,” he says. Ching created the collage in the aftermath of Taiwan’s 2014 Sunflower Movement, when protesters rallied against a proposed trade agreement with China. The parallels between that moment of upheaval and the current Hong Kong protest is clear: both movements were initiated by young people, with the Taiwanese and Hong Kong governments both deploying water cannons to clear away the protestors. That informed “Weather Report: Liquefied Sunshine,” a dual-channel video installation, figures clad in yellow raincoats spray water on the Hong Kong Museum of Art and the Museum of Contemporary Art Taipei. It’s a reference to police water cannons that peels away the sheen of legitimacy usually accorded to these public institutions, asking a pointed question about the role they have in shaping the city.

Yet the most startling of Ching’s works is “Panic Disorder,” which induced a fair number of yelps on opening day. Viewers peer down to examine cockroaches, which are concocted with double-sided tape. “I’m actually really scared of cockroaches,” says Ching as he lightly prods the belly of one of his creations. “If you look at them closely, these look nothing like the real ones. Often, when we fear something, we only have a vague outline of that thing in our minds.”

It’s difficult not to associate the work with the Hong Kong police, who refer to protesters as “cockroaches.” But “Panic Disorder” also highlights how our threshold for anxiety has changed since the protests began in early June. “Back then, when Hong Kong was a very safe city, seeing a cockroach run across the street would already provoke a strong reaction,” says Ching. That seems positively innocent in these days of near-daily violence. He has no idea if Hong Kong will ever return to a more innocuous state. “I think it’s hard for artists, anyone really, to imagine the future, at this point,” he says. “The surreal has taken over what we knew to be reality. It’s hard for art to go beyond reality at this point.”

Does art still have a role in these trying times? Ching takes a moment to think. “I think art—and I can only speak for myself—allows us to reflect. For this exhibition, the idea is sift through old works, and somehow find the threads of connection they have to the present. This exercise isn’t going to provide any answers but it does allow me, at least, to work through what I’m feeling.” By contrast to Liquified Sunshine, Ho’s exhibition, Force Majeure, responds more directly to the protests. Ho has installed protective shields on a row of windows at the back of Blindspot. In one corner, a lone shield leans against the wall. Ho picks it up and bangs it hard on the floor, the thunderous sound immediately reminding of the way riot police beats their shields at the frontline.

The aesthetic elements of the protest also finds its way into a stack of brightly-hued rubber pellets meticulously arranged in a pyramid structure. Rubber bullets and beanbag rounds are used by police to control crowds, and Ho says his installation is a retort to their claims that they are safe to use, despite many reports of injuries, including one protester who was blinded by a beanbag. “You see people bleeding from their heads on social media and TV,” he says. He picks one up and bounces it off the wall. “So I thought, why don’t I make something that you can actually play with?” Next to this work, a single-channel video work shows Ho’s recordings of the Hong Kong protests. Unlike media clips, which are heavily edited, Ho says his films offer a different kind of viewing experience. “Once I set up the video-cam, I just let it run,” he says. “There is no editing so you really get to zoom into the details.” Such details may include the different makeshift tools the protestors have at their disposal, or the way journalists try to get the best shot possible. One particularly jarring moment came by way of the 25 August protest in Tsuen Wan, when a mild standoff between the police and protestors escalated into a maniacal scene of tear gas, flying barricades and water bottles. “The police fired tear gas at the pedestrian bridge I was on,” says Ho. “I managed to duck into a wet market to wash my eyes.”

One of Ho’s most striking pieces is not directly related to the protests at all. Instead, it is a series of black and white photographs of fallen trees taken after Typhoon Mangkut barrelled its way through the city last September, leaving behind a trail of devastation. Mangled roots, ruptured trunks and a once-majestic tree leaning precariously over a harbourside railing; these are living, breathing organisms whose bodies have been battered, each a startling portrait of the wounds that’s opened up in our cityscape.

Visually, the stark photographs seem to stand in contrast with the shields, rubber pellets and video works about the protests. But for Ho, the line between natural and man-made catastrophes isn’t always so clear. “Trees are living in city, a place populated by people, so there isn’t always that clear line.” And therein lies the point of art in such tumultuous times: to expose just how fragile those imagined boundaries can be.