Slow Hong Kong: The 21 Stages of the Mid-Levels Escalator 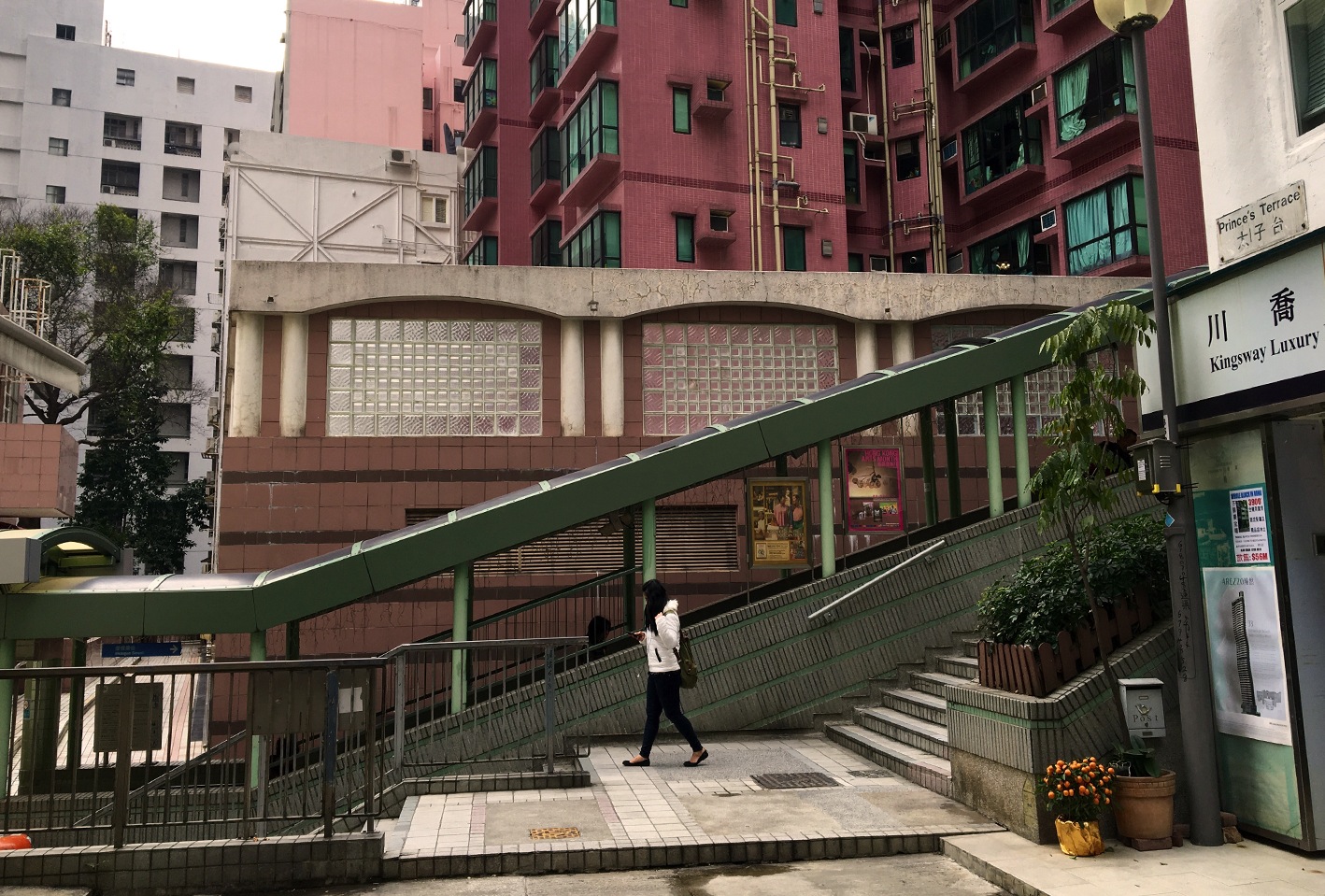 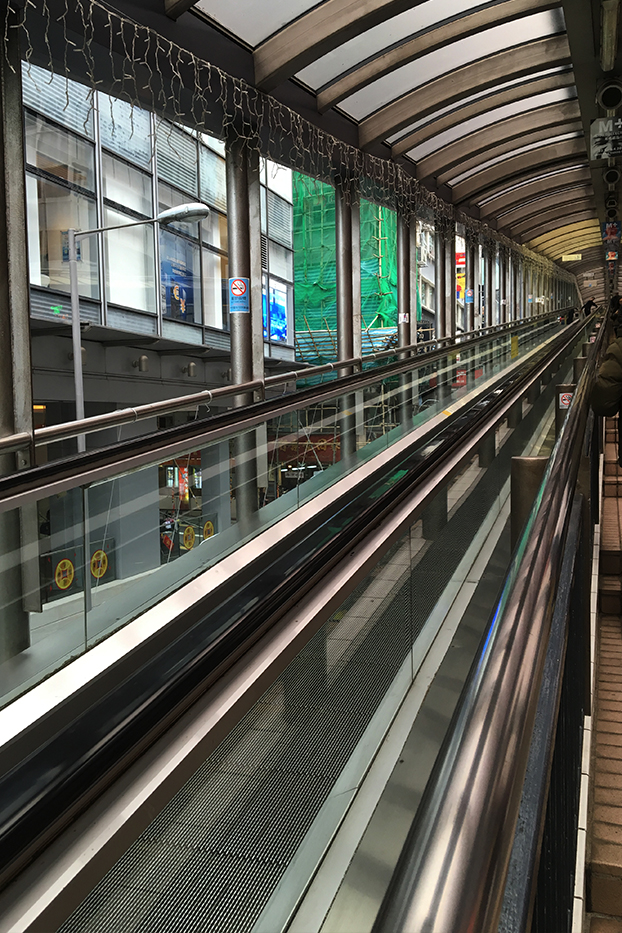 Just as Hiroshige painted the 53 stations of the Tokaido, the famous route linking Tokyo with Kyoto, I invite you to discover the Central-Mid Levels Escalator Link’s 21 stages: 18 escalators, three moving sidewalks and a handful of footbridges to tie everything together. Welcome to one of the world’s seven “coolest commutes,” according to CNN.

This odd creation, longer than any other in the world, opened in October 1993 thanks to the handiwork of a French company, Les Constructions Industrielles de la Méditerranée, whose original purpose was to build ships. If you think about it, there is a sense of voyage when you make your way along the escalator’s mostly elevated route, a sense of floating on top of the world.

The escalator was conceived to alleviate traffic from Central to the residential areas of the Mid-Levels by encouraging commuters to take advantage of a sheltered path adapted to Hong Kong’s steep topography. Ultimately, it came to serve a much wider public, while the wealthiest commuters continued to make their way by taxi or chauffeured sedan. Even if the goal of reducing traffic was never realised, and the project’s original budget more than doubled to HK$250 million, the escalator now serves 85,000 people per day – three times more than was originally anticipated. Among them are domestic helpers heading out to do their daily shopping, young people staggering through Soho as the night wears on, and of course the tourists, wanderers, walkers and other dreamers. What ties them all together? The smartphones glued to their hands – at least until walking and texting is banned!

Actually, if you take the time to read the list of rules and regulations before taking the escalator, you might think twice about partaking in what seems even riskier than a long-haul flight. In theory, you should always stand firm, hand affixed to the handrail. Besides the usual ban on smoking and sitting, you’ll notice more specific warnings: don’t ride the escalator with your stroller, watch out for your toes if you are wearing sandals, don’t feed any wild birds you come across. You’d better follow all these rules to a tee, because you are being filmed along the entire course of your journey.

Despite all of this, it’s worth building up your courage and diving right into it. But wait – what time is it? The direction of your travel will depend on the time because the space-constrained escalator system runs in only one direction, with a few small exceptions. From 6am to 10am, it runs downhill; from 10:20am to midnight, uphill. Those 20 minutes in the morning seem like a kind of black hole in time and space, though they serve a prosaic purpose, because it takes that long to stop and reverse each individual portion of the escalator, starting from the summit. At 10 o’clock every morning, many travellers wait patiently at the bottom of the escalator, outside 100 Queen’s Road. They would rather kill time than trudge up the steps that flank the escalator all the way up to Conduit Road. The escalator magnanimously operates until 3am on the first morning of the Chinese New Year. Each of the system’s escalators and travelators are numbered from 1 to 23, followed by an E for the former, a T for the latter. Try to make your way up in order, knowing that it is possible for you to join it or escape at 14 different intersections. Escalators 1 and 2 lead from Des Voeux Road through the old shell of the Central Market. It’s here that you will realise that it is actually impossible to follow each portion of the escalator link in sequence, because the first two run in opposite directions. After this deception comes a surprise: what happened to stages 3 and 4? The sections just past the Central Market are 5T, 6T and 7T, the only three travelators of the system. 3 and 4 are missing, swept away in 2006 with the renovation of 100 Queen’s Road.

As you make your way up above Cochrane Road, the travelators offer an unparalleled view over the lively Graham Street market and its surroundings, not to mention dai pai dongs and the entangled shop signs of Stanley Street and Wellington Street. Standing on the moving sidewalk, you wonder if it’s you or the scenery that is moving.

The one short two-way section of the escalator allows you to pass over Hollywood Road and start a steep climb up Shelley Street through Soho — “South of Hollywood Road” — one of Hong Kong’s main nightlife areas. Gyms, bars and restaurants of all nationalities stare back at you from every corner.

As you make your way up, you will no doubt encounter a section under repair; maintenance is scheduled weekly in order to keep the system functioning ahead of a renovation that is slated for 2017.

After reaching Caine Road, your journey becomes calmer. The charm of Prince’s Terrace invites you to take a break in one of its galleries or on a café terrace before you reach the Jamia Mosque, with its pretty green hue. Along the way, you’ll cross Rednaxela Terrace, whose strange name was the result of an unintentional inversion of the name Alexander. Finally, from Mosque Street to Conduit Road, your only company on the escalator are neighbourhood residents – those for whom the system was originally conceived.

Some 20 minutes after you started your trek, you arrive at the end of the system, 800 metres away and 135 metres up. It certainly isn’t the Mount Fuji of Hiroshige’s prints, but the terminus of a charming journey that allows you to discover — at no cost, at your own pace and from a slightly removed position — the different facets of Hong Kong.

The Central-Mid Levels Escalator Link has led the government to build two more similar systems in Fortress Hill and Sai Ying Pun. And if we took a tour…?


Slow Hong Kong: The 21 Stages of the Mid-Levels Escalator