Still Human: A Film About a Domestic Helper, a Paraplegic – and Human Dignity 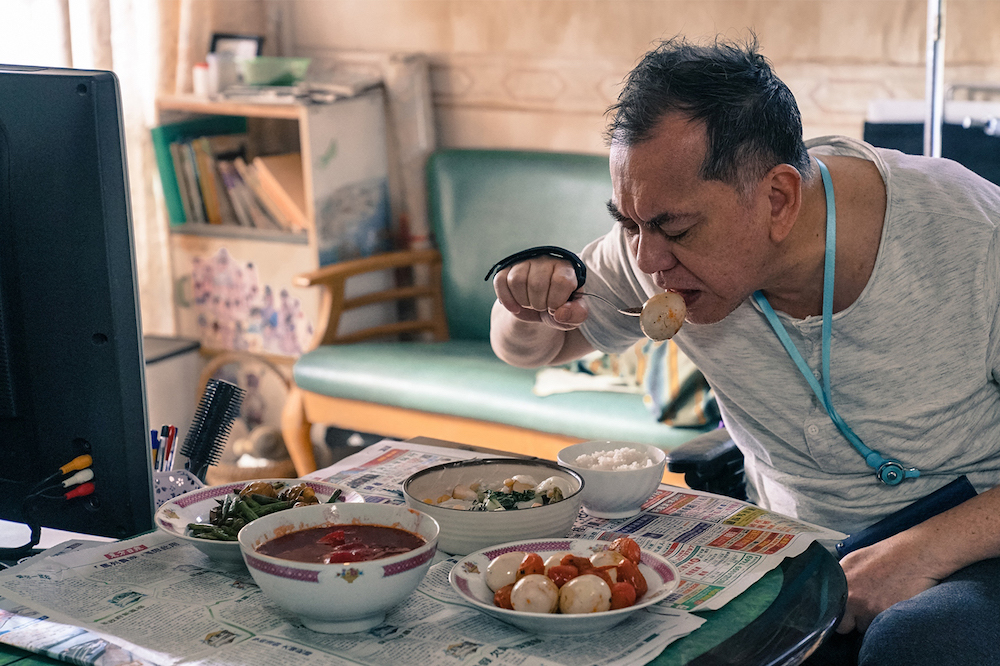 To point out that Crisel Consunji looks nothing like the foreign domestic helper she plays in Oliver Chan Siu-kuen’s debut feature, Still Human, is fitting. That’s entirely the point of the film. Sitting at a table in the Wan Chai branch of the Baumhaus arts learning centre she owns and operates with her husband, Consunji could be any of the ambitious parents currently taking a coffee break in the playroom. Though she has a lengthy musical theatre background, Consunji calls herself a teacher – and now perhaps actor.

Chan, on the other hand, looks every bit the indie filmmaker, dressed in comfortable shoes practical for standing around all day, and in jeans with plenty of pockets in which to tuck notes. Consunji, normally decked out in an outfit best suited to chasing around toddlers and handling errant paint, is glammed up a bit on this day for some photos – the way she was when the director and her star first met.

“I told my [assistant director], ‘She’s too elegant,’” says Chan, laughing as she recalls the audition that brought them together. “But her audition was really strong. She was Evelyn.”

In Still Human, Consunji plays Evelyn, a woman who, like thousands of others, arrives in Hong Kong to work as a caregiver — a foreign domestic helper — to a curmudgeonly paraplegic Leung Cheong-wing, named Anthony Wong, who has a penchant for compelling his helpers to quit. Evelyn doesn’t speak Cantonese and Leung doesn’t speak English; their scratchy communication provides much of the film’s humour. She’s not that good at cleaning and would rather be a photographer, recalling acclaimed Hong Kong-based Filipina photographer Xyza Cruz Bacani. Leung is irascible, feeling alienated from his family and far from affluent. But eventually the two learn to look past the surface and see the disappointments, hopes, dreams, and hidden truths of their respective circumstances. The title could refer to either.

The film is the latest in Create Hong Kong’s First Feature Film Initiative (FFFI) grant programme, designed to give a boost to emerging directors, and follows Wong Chun’s Mad World and Lee Cheuk-pan’s G Affairs. It might be the strongest film from the programme to date, which is actually doing what it was supposed to: give a spark to the local industry.

Chan was grateful for the opportunity. “I could not imagine any private investor that would have funded this film,” she says, before addressing the elephant in the room that is Wong’s presence in the film; his public support of the Umbrella Movement in 2014 has effectively banished him from Mainland Chinese screens. Chan is sanguine. “Even if it doesn’t open in China the world is still a very big market,” she says. “Anthony Wong was a good investment for me – people love him overseas. The same people who told me [he] was a risky choice are now saying he was a good choice.” In many ways Still Human is first and foremost for Hongkongers, though its themes are universal. On the surface, it may seem like an odd couple or buddy dramedy about two polar opposites who find common ground, but scratch that surface and it’s more in line with the recent clutch of films turning a spotlight on some of Hong Kong’s more pressing social issues: Jevons Au’s Distinction focused on marginalised kids with learning disabilities; Kenneth Lau’s Adieu explored the micro and macro impacts of a family dealing with terminal cancer. Chan, who wrote the deft screenplay as well as co-edited, manages to point out just how invisible the disabled and Filipino workers are without getting up on a soapbox, largely through a handful of insightful cameos featuring Evelyn’s friends Rhea, Loma and Ann (Marie Cornelio, Lucy Navarrete Valenzuela and Xyza Cada).

The film was born of a cocktail of observing a single moment, Chan’s everyday experience growing up in Hong Kong, a wheelchair-dependent parent and her own active wokeness and proud feminism. “As Hong Kong people we’re numbed to this,” she explains, citing the regular Sunday scene that sees thousands of Filipina workers converging on the city’s public spaces.

“It’s an everyday thing, but I often thought, ‘Why are they sitting out here?’ And until I started doing research I didn’t really get it. It was a cumulative effect. Why are they coming here? What are the opportunities? And why is it always women? Though that’s not really broached in the film. But the moment came from observing two people in my neighbourhood that inspired these characters. Their interaction was genuinely sweet but I felt a bit uncomfortable. The employer and employee aren’t supposed to mix. But then I reflected and wondered why shouldn’t they mix. Maybe she wasn’t even a domestic worker. It really made me reflect on my own perceptions and behaviours.”

Ultimately the film is about our common humanity and the ease with which Hong Kong people can too easily push anyone not in the mainstream to the periphery — also a common theme to producer Fruit Chan’s work. But it was the dignity Chan gave both characters, but Evelyn in particular, that got Consunji’s attention. After it was determined a recognisable Filipino actress in the role would blow the budget, Chan returned to her initial instincts to cast someone locally, who might be harbouring modest ambitions, which is in line with the film’s themes. “You’re trying to reach out and connect with a certain group of people and you don’t want them thinking, ‘Oh look, a famous person.’ There’s no resonance,” says Consunji.

Crisel Consunji as Evelyn, a domestic helper from the Philippines with both an inner life and a backstory – Photo courtesy Golden Scene

Consunji has been living in Hong Kong since 2008, first arriving to perform in Hong Kong Disneyland’s High School Musical Live! Born and raised in Manila, she studied and worked in musical theatre starting at the age of ten, but holds a master’s degree in political science, completed just before the call from Disney. “You can imagine what a change it was to go from comparative politics to singing and dancing and ‘Hi! My name’s Crisel!’ every day,” she laughs.

Consunji thought her drama days were behind her when she left Disney, but friends convinced her to respond to Chan’s Facebook casting call. The script cemented her desire to be involved. “I felt this was the voice we needed for a dignified story. Everything I’ve seen about this subject was poverty porn. I wanted to be part of claiming the narrative,” she explains, admitting that yes, she’s been the subject of assumptions that can be painful. Consunji is Filipina. She must be a domestic worker, right? “I encounter this from both locals and Filipinos alike. That was one of the first things that got me so upset when I first got to Hong Kong. It’s not everyone but it does represent the culture we grew up with. But in my 11 years a lot has changed. It’s an ongoing process. Sam Lee as Fai, the friend and former co-worker “Chan also backed into filmmaking in a way, even though she was sure she wanted to make films as a kid, explaining she had a ‘very traditional Chinese education’. I just so happened to get really good grades, so when I said, ‘I’m going to study filmmaking’ my teachers asked me if I was out of my mind.” She passed over her first choice, medicine, and enrolled in the Chinese University of Hong Kong’s global business studies department. “I got to go on exchanges in South Carolina and Copenhagen. So it was fun, and it taught me things that came in handy later,” she says.

Her studies were followed by three years in banking, during which time she made short films on the side. When a professional internship was on the cusp of turning into a career in finance she balked and headed to Baptist University for a master’s degree in filmmaking. “The biggest change in my career came by working part-time for the screenwriters’ guild,” she says. I met a lot of filmmakers, and that’s how I got my earliest opportunities to write professionally.”

Evelyn realising some of her private ambitions, with a new camera from her increasingly empathetic employer – Photo courtesy Golden Scene

Still Human has been rolling out at selected festivals since it premiered at the Hong Kong Asian Film Festival last year and internationally at Hawaii International. It heads to the Udine Far East Film Festival at the end of April. Here at home, Chan hopes Still Human will open Hongkongers’ eyes to more than just how invisible so many of their compatriots are. “People under any circumstances, facing any challenges, at any point in life are entitled to the good things: harbouring dreams, good relationships, love,” she finishes. “No one has a right to look down on anyone who is different, and who has hidden dreams – big or small.”


Still Human: A Film About a Domestic Helper, a Paraplegic – and Human Dignity