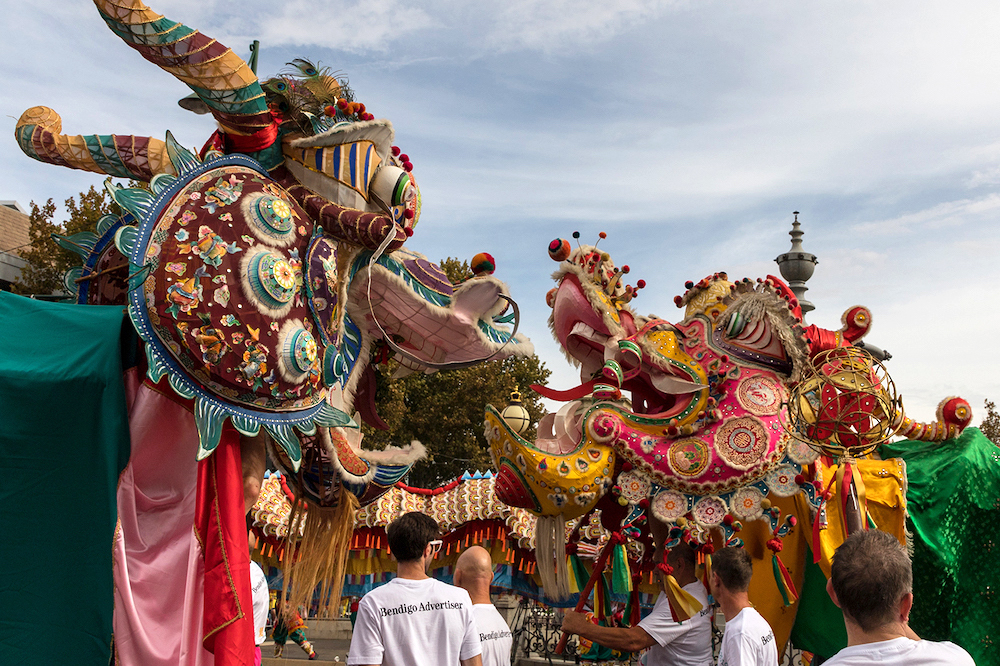 Dai Gum Loong makes his way through the streets of Bendigo. Loong and Sun Loong arrive to meet him.

The clangour of cymbals and drums splits the air as lions prowl, pounce and tower vertiginously above the gathered crowd. An azure sky frames their acrobatics on this Holy Saturday as the dragons lie dormant, waiting to rise. Lion teams from across Australia have converged to grace these Easter celebrations in Bendigo, a city of 95,000 people about 150 kilometres northwest of Melbourne – a city with a surprising Chinese heritage. 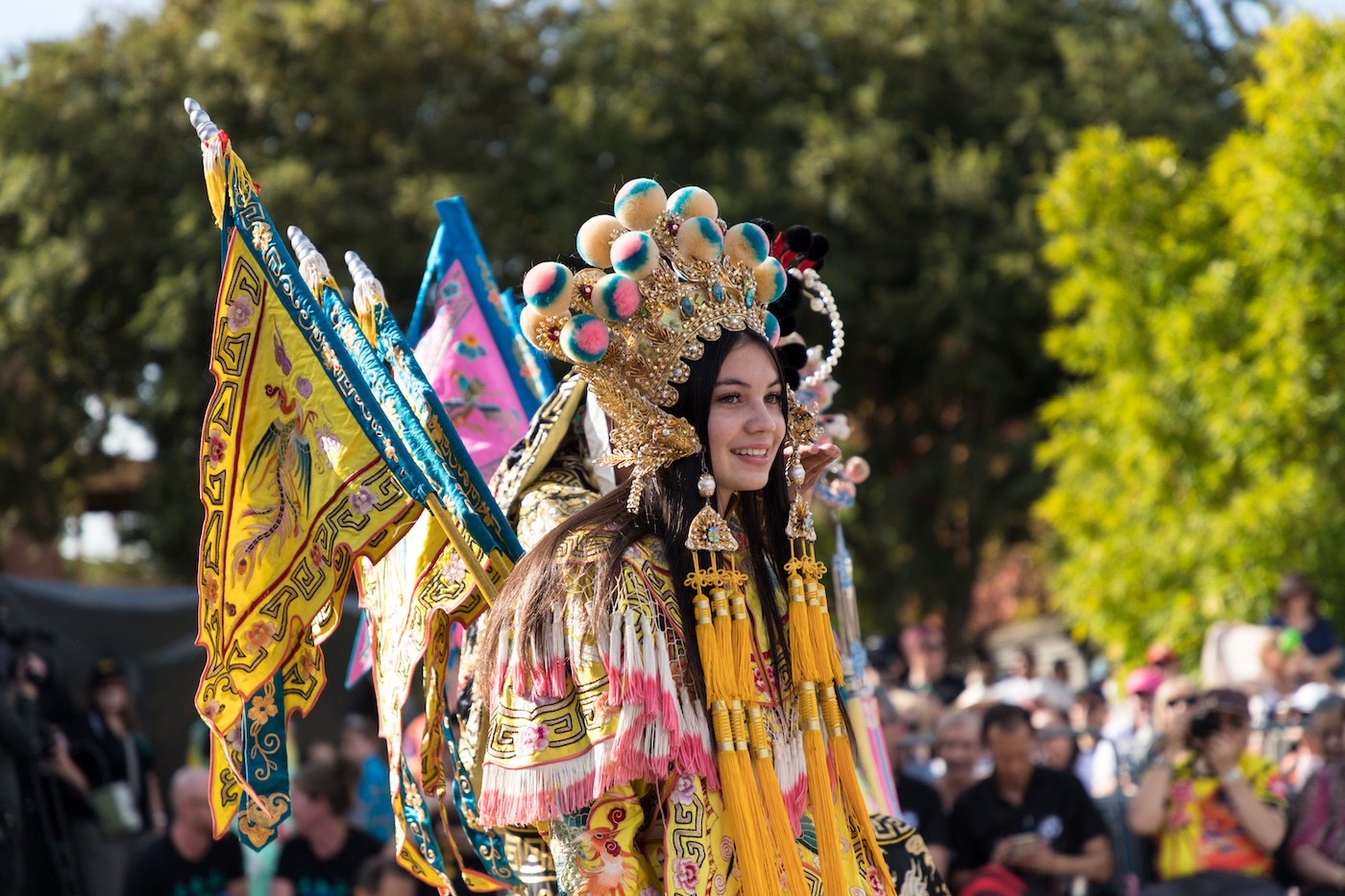 Transplanted to a new landscape, the lion dance has taken on a powerful, balletic form beyond stylised movement; animalistic gestures, humour and athleticism bring these formidable beasts to life. The afternoon’s lambent glow is a reminder of what drew thousands of Chinese to Bendigo even at the height of the White Australia Policy – the promise of gold and a better life. If only they could see that their descendants have thrived and how their adopted country has embraced Chinese culture in the name of charity and beneficence. On signal, the rapid-fire report of half a million firecrackers reverberates across Rosalind Park sending hundreds of bats aflutter, a lucky omen taking wing. Across the city, dragons begin to stir. Inside the softly-lit Golden Dragon Museum, busy fingers prepare Bendigo’s elder dragons. For years, volunteer conservator Kirstie Jones has been the dragons’ protector. She works tirelessly securing loose ornaments, polishing tarnished mirrors and replacing nylon thread with less harmful cotton. Loong, a 150-year-old Qing Dynasty-era dragon, will soon make his first public appearance since 2012. Though faded, he is magnificent. Special care must be taken: his bearers will wear gloves, and bags into which they have been instructed to put any pieces that might fall off Loong. Horse bells inside the dragons give them a festive chime. Routine maintenance on Loong, the oldest dragon in the world.

Yar Loong, the night dragon, is also preparing for flight. Translucent, as though made from gossamer, this 80-year-old lantern dragon comes from Hong Kong’s famed Kum Yuk Lau workshop. Abandoned by a Sydney group, Yar Loong first appeared at the Bendigo Easter Parade in 1939. Severely damaged in a fire, he was furloughed and only rediscovered in the 1970s then restored in 1996; he is beloved.

So far, Jones has gone over 65 metres of scales on Bendigo’s main dragon, Sun Loong. “There are 300 more,” she notes offhandedly. Fifty-year-old Sun Loong will retire this Easter, but Jones must dust off the cobwebs for one final duty – to meet Bendigo’s new dragon, Dai Gum Loong, and show him the way to his new museum home. The same ritual took place in 1970 when Sun Loong, then the new kid on the block, was met by Loong. The two dragons delighted crowds as they strolled the streets of Bendigo together.

Richard Guy, former chairman of the Bendigo Bank, remembers that day well. “As a child, I was terrified of Loong,” he recalls. “He was always accompanied by lots of crackers and noise, and he looked fearsome. My father told me that he ate naughty boys!” Dai Gum Loong waits to be awakened inside a school gymnasium. He is the longest imperial dragon in the world at 125m with 7000 individual scales. It was Guy’s father Allen who helped commission Sun Loong at Hong Kong’s Lo On Kee workshop. The elder Guy had chaired Bendigo Bank’s antecedent companies and, along with a group of friends, raised the A$25,000 (HK$137,000) necessary to replace the ageing Loong. Now Richard has taken up the mantle, raising A$750,000 to build Dai Gum Loong and to restore Sun Loong. It is as though his family’s association with dragons was preordained. “When I was asked to be involved it really wasn’t a question for me, it was an honour,” he says. “I hope that Dai Gum Loong captures the imagination of Australia and beyond and that people will come to remember Bendigo as a dragon city.” Dai Gum Loong emerges from his lair for the first time.

Before dragons, Bendigo was famed for gold. Early Chinese immigrants called it Daai6 Gaam1 Saan1 (大金山, “Big Gold Mountain”) and it is for this that Dai Gum Loong is named. The dragon’s silken body measures 125 meters and is covered in 7,000 scales. He is the longest imperial dragon in the world. Built in Shau Kei Wan by Master Hui Ka-hung of Hung C Lau workshop, Dai Gum Loong’s gestation was arduous. Anita Jack is manager of the Golden Dragon Museum, which was created through the vision of her father Russell. Now taking up his duties, Jack has been instrumental to the process of creating Bendigo’s new dragon and seeing to his safe passage.

Dai Gum Loong makes his way through the streets of Bendigo. After arriving in Australia a month ago, the modular beast had to be assembled under Jack’s careful watch. The operation was a community effort and took place in secret within an aircraft hangar. The Bendigo Woodturners, a local crafts club, built the sturdy wooden stands that hold the dragon up and vintage car restorers, Simon Young and Shelley Humphrey, closed shop for a day to bolt and tie the bamboo and aluminum frame together.  “There’s a lot of overlap between automotive work and dragons,” says Young.

Even at a very late stage, one day before Dai Gum Loong’s Good Friday eye-dotting ceremony, work is still being completed. Master Hui and his nephew/apprentice, “Tiger Boy” Hui Siu-kei, are frantically making finishing touches to the dragon’s technicolour neck. On the verge of success, Tiger Boy is reflective. “This is probably going to be the only opportunity I will have in this life to create a dragon like this,” he says. “In 50 years when they need a new dragon I will be over 70 years old. It’s been an exceptional experience to be part of history.” Since Dai Gum Loong, the apprentice has been kept busy. His uncle’s workshop has received a number of other dragon commissions as a result of Bendigo’s patronage and there is no doubt the tiny Shau Kei Wan shop will continue building their massive dracontine creations. Dai Gum Loong’s head weighs 27 kilograms; it takes both physical strength and high standing in the community to be honoured as his head carrier. The role has traditionally fallen only to men. Felicity Brennan-Tong, a lifelong lion dancer and two time Easter Parade Princess, fondly remembers her late father, David Hui Tong, who is widely regarded as one of the city’s greatest dragon carriers. “He was built like a rugby player,” she says. “He had a lot of strength behind him. He could throw a dragon around and do things that others couldn’t.”

Dai Gum Loong’s sheer size may prove a challenge even to the most adept carriers. At the eye dotting ceremony, veteran dragon bearer Dan Beck strained under the immense weight, cords standing out on his neck, arms taut like cables. For such an unusual sport there is no one way to train. One carrier took to raising multiple kettlebells on one arm, and another described a regimen of planks and deadlifts to prevent hernias and spinal injury.

Yar Loong and Sun Loong greet one another.

Easter Sunday brings grey, indeterminate skies swollen and streaked with dark clouds. Dragons are known for bringing rain, but showers aren’t good for Dai Gum Loong’s paper hide. Finally, word comes that the procession will go ahead. Incense is lit and respects paid then volunteers assume their positions. Drums thunder as Hung C Lau heads up the procession. The massive dragon breaks free of inertia and emerges from his lair. Taking places of honour are Kirstie Jones and Felicity Brennan-Tong, Bendigo’s first ever female head carriers.

Striding powerfully, the women pass Dai Gum Loong from one to another on his maiden flight. “I’ve waited so long for this,” one carrier exclaims. “As a girl I was told I’d never carry a dragon and that was the first time I faced the harsh reality of discrimination.”

“I had hoped for this for my daughters but I could never have imagined this for myself – this really is the people’s dragon,” adds Jones, buoyantly. Loong and Sun Loong arrive to meet him.

Under police escort, Dai Gum Loong winds into town, flanked by cheering crowds thirty deep. Coming down the opposite hill, an armada of pounding drum carts, pennants flapping, heralds Bendigo’s dragons: the diaphanous Yar Loong, stately Sun Loong and venerable Loong. An older gentleman, on seeing the dragon of his youth, calls out to Loong: “Long time no see, mate!” One woman weeps with joy at the sight of Yar Loong. The dragons bow and nod respectfully, attended by capering lions and the deafening roar of firecrackers. At their centre, Anita Jack embraces her father. “We did it,” she says, smiling between tears of joy. “We did it.”

Back home in Australia, the world's largest imperial dragon joins his predecessors – and so do the citizens of Bendigo, united by Chinese tradition.