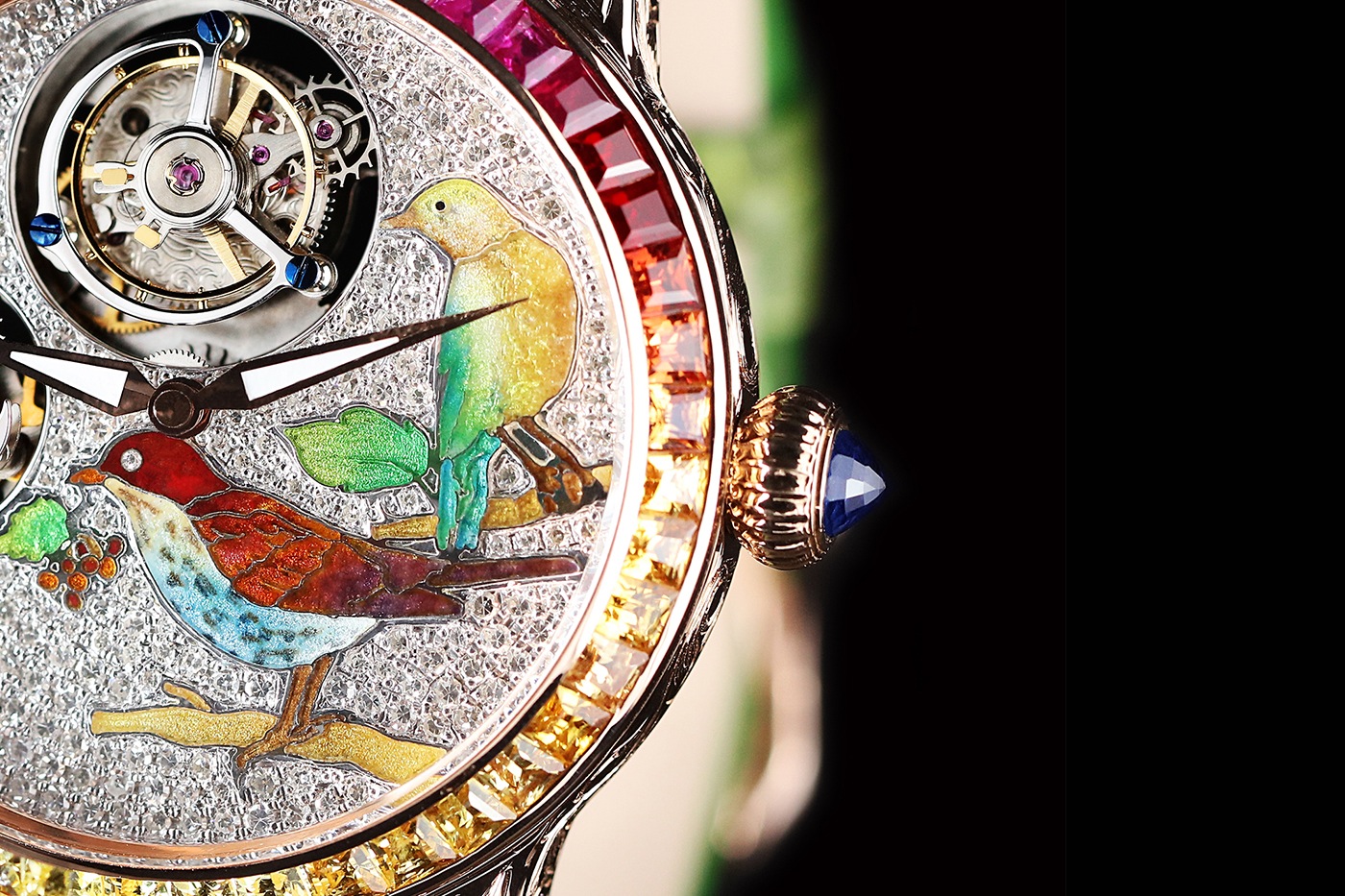 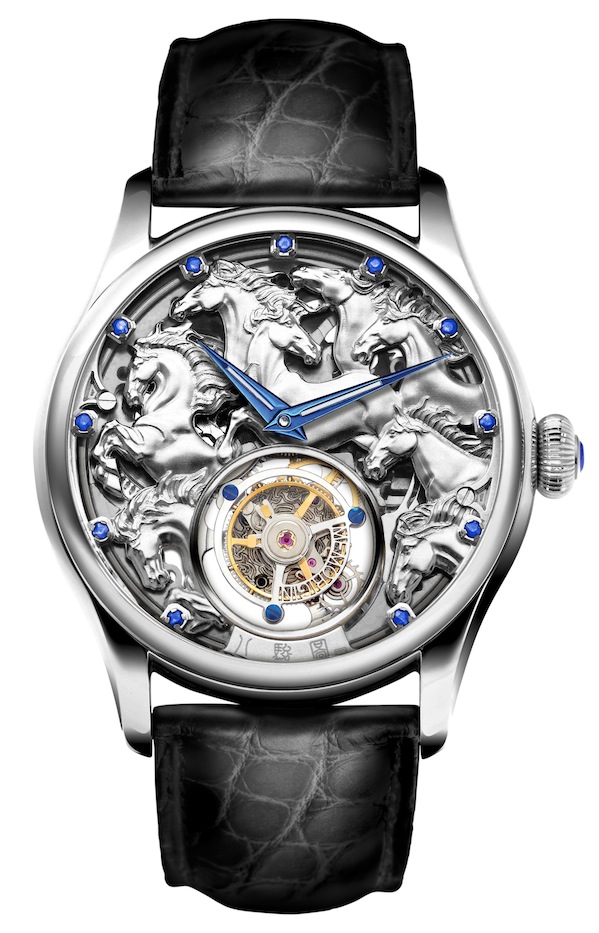 Horse watch from the Zodiac series by Memoringin 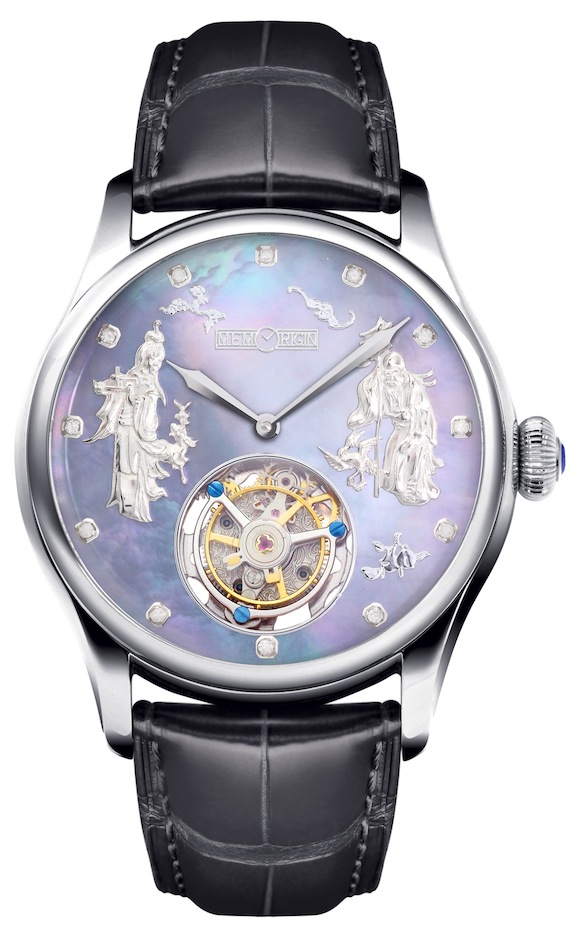 This story is brought to you by HKTDC Hong Kong Clock & Watch Fair, developed and produced by Zolima CityMag

It was the Jesuits who first brought Western-style clocks to China in the 16th century, initially to Macau and later mainland China. These intricate objects, which the Chinese came to call “striking clocks” owing to the sound they emitted, became very influential, assimilating far more quickly into Chinese life than any other foreign technology, and having almost as strong an impact on society as the Gregorian calendar.

That enthusiasm for clock technology has run through the course of Chinese history since then. There are many examples of how mechanical clocks have played a lively role in the history of Sino-European diplomacy owing to their popularity in China, with ornate gifts of timepieces made to imperial courts crafted to earn the favour of emperors through the Qing and the Ming dynasties.

Hong Kong’s own history with watches comes much later, with watches and their paraphernalia, including straps and cases, being manufactured in factories and workshops here from the 1930s onwards, and the Federation of Hong Kong Watch Trades and Industries Ltd. being established in 1945. In the 1960s, Hong Kong watch assembling replaced watch component production as a large number of Swiss movements were supplied to the city.

The late 1970s and 80s saw electronic and quartz technology enter the market, providing cheaper alternatives to their mechanical counterparts. By the early 1990s, Hong Kong watch factories started closing down as manufacturing moved to a newly-opened up mainland China, where labour costs were low. Fast forward almost 30 years and watchmakers are comparatively thin on the ground, though a number of enthusiastic entrepreneurs are paving a way forward for a new generation of Hong kong watch design. 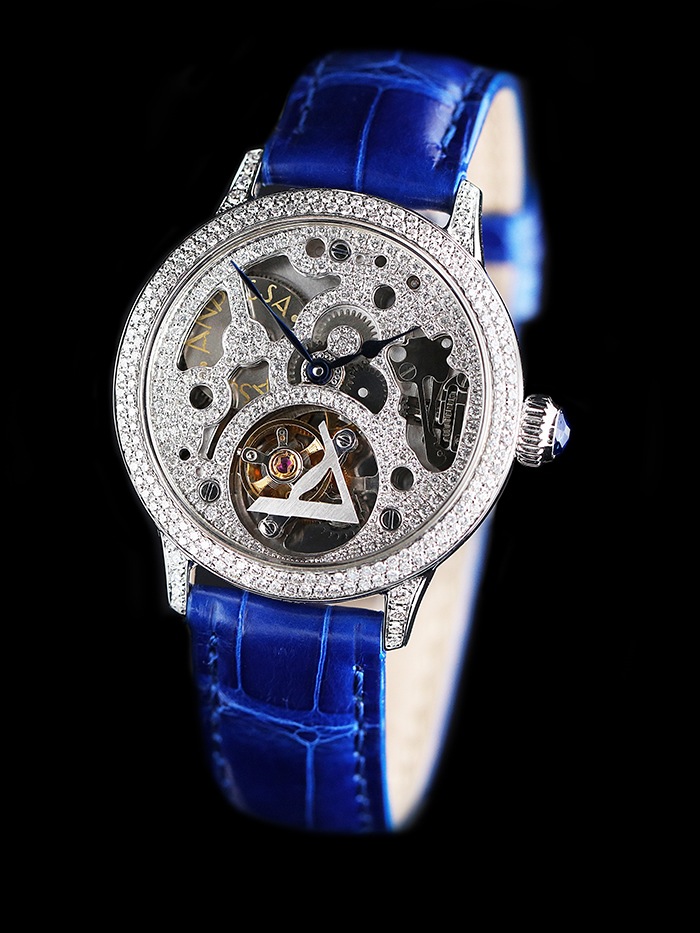 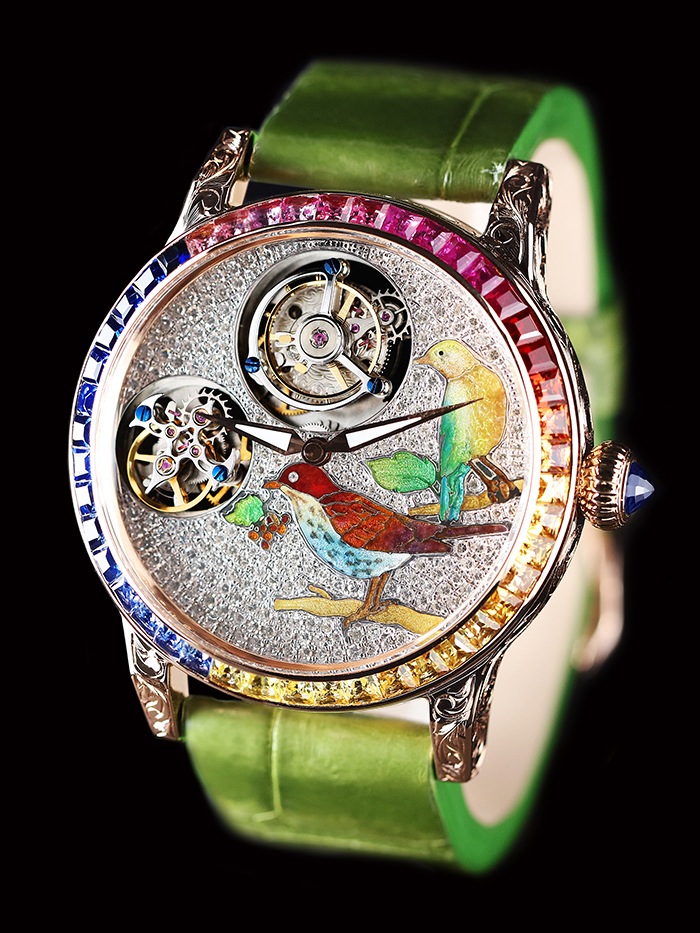 Double Tourbillon Watch with hand-crafted features in enamel and saphir

45-year-old Gary Ching is one such example. Ching has always loved making things and taking on big challenges, but long before he had the resources to start his own watch brand, he worked days as a salesman of hi-fi stereos, and nights as a DJ in karaoke joints in Sham Shui Po, changing clothes in public washroom between shifts. That was a long time ago now, and in the 20 or so years since, Ching has since worked various jobs, acting for years as a photographer and printing technician before taking on a whole new venture: starting his own watch-making business, a passion project that many deemed unviable as a career path or sustainable business. He is gradually proving those naysayers wrong, launching his own brand, Anpassa, in 2013, a nimble business that builds customised wrist watches for clients wanting something personalised and handmade.

Among the products he has carefully designed are matching wedding watches made out of gold that are adorned with attachable clasps that depict phoenixes and dragons. Chinese symbolism features quite regularly in his designs, which can reference animals of the Chinese zodiac. One piece he is particularly proud of is that of a monkey design he made for his young son. His pieces are created after careful discussion with his clients in which he determines how to make out of their life story something memorable and unique. 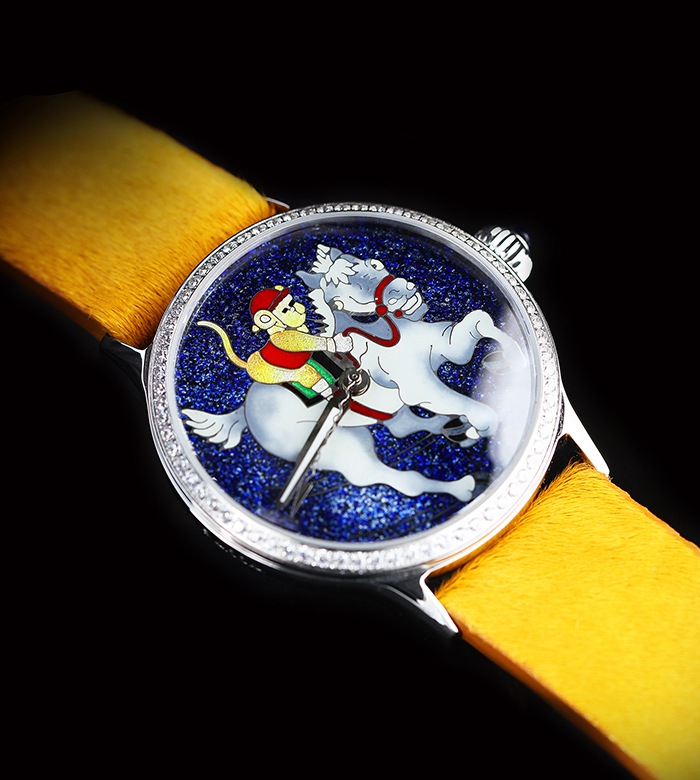 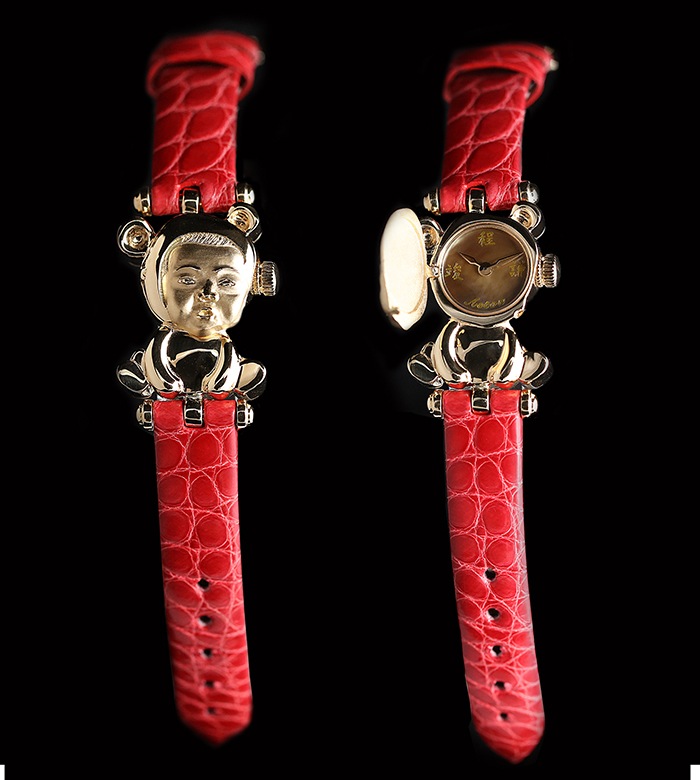 Operating from a 1,000-square-foot workshop in Kwun Tong, he and his wife run a small team of craftsmen who perform the intricate work of putting together watches tailored specifically to the stories of their would be owners. It’s certainly not the easiest of projects, but it’s one that both enjoy, and in which they find fulfilment. “I believe if you want to to something, you can do it,” says Ching, describing how he first set upon learning to make watches years ago and takes pleasure in the physical aspect and challenge of assembling them piece by piece, a process he learnt by watching hundreds of YouTube videos.

This is a business model that works without the speed and ease of production lines, which is how they manage to operate in a relatively small space, thereby saving on rent. Individual watches can take months to complete, using a mode of production not unlike that of Hong Kong in the 1950s and 60s, when manual labour was a much larger part of the city’s employment ecosystem, before the city’s manufacturing needs moved to Mainland China amid the rising cost of labour here. Ching is not the only watchmaker in Hong Kong, but he belongs to a small demographic of upstarts competing in a market dominated by long established international brands. He hopes it will be a business that can grow to the point at which he can pass it on to his son, who is now a toddler, and who he hopes will share his enthusiasm for making things with his hands alongside flying the flag for Hong Kong design.

Horse watch from the Zodiac series by Memoringin 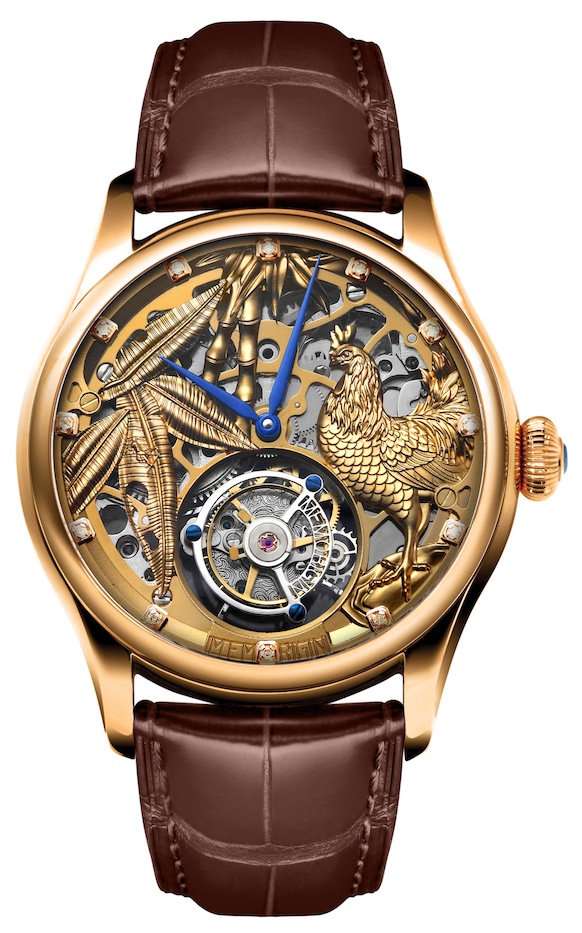 Goat watch from the Zodiac series by Memoringin

Ching is not alone in his endeavour to raise the profile of Hong Kong watch making. William Shum started Memorigin in 2011. He belongs to a new generation of entrepreneurial watchmakers devoted to creating original designs that showcase Hong Kong talent. Memorigin is a brand that positions itself as a luxury product from the city of colliding cultures, merging Swiss technology — notably the tourbillon movement that stretches back to the 17th century — with certain legacies of Chinese design and philosophy. Like Ching, Shum says he always had an enthusiasm for watches, but attributes the launch of his own watchmaking brand to destiny, as opposed to a love of intricate handiwork.

A graduate of Cornell, Shum decided to go into watchmaking after visiting a factory owned by his father in Hangzhou, which he realised had the capabilities to produce the tourbillon mechanism favoured by luxury watchmakers. Developed and patented between 1795 and 1801 by French-Swiss watchmaker Abraham-Louis Breguet, a tourbillon produces a turning motion that aims to counter the effects of gravity, and helped make pocket watches more accurate. Now that digital watches prove more reliable ways of tracking time, the tourbillon serves more a mechanism proving the sophistication of a watch more than its accuracy. This factory in Hangzhou is one of the 30 or so in the world with the capability to create this mechanism, manufacturing for a number of international clients, but none from Hong Kong. Shum resolved to change that.

Shum set about to launch his own watchmaking brand using this resource to produce middle market to luxury watches designed in Hong Kong that were manufactured in mainland China. But, despite certain serendipitous forces operating in Shum’s favour, all wasn’t smooth sailing. “It is hard to start a watch business here,” he says. “You really have to be devoted to your brand to start and it’s not easy to be successful. Difficulties include trying to convince customers that products designed in Hong Kong can be of good quality, especially amid the competition of behemothic international brands that enjoy long legacies. “Step by step, I hope Hong Kong can build up its reputation for creating luxury goods,” he says. “I want to show the beauty of Hong Kong.”

Much of that beauty he is referring to takes takes reference from the Chinese antiques that have inspired Shum. His father has been collecting them for decades, and they now number in the thousands. “My family is very traditional Chinese, and my father has been collecting wooden antiques for more than thirty years,” he says. Shum’s father, Shum Mak-ling, was an industrialist born in Hangzhou who came to Hong Kong before William was born. He collected antiques that were otherwise being cast aside, accruing a collection of around 10,000 pieces.

William Shum shares his father’s enthusiasm for Chinese heritage, which he infuses into his own products. This passion for showcasing the best in homegrown aesthetics is something that has helped garner a follow both in Hong Kong and mainland China, alongside Japan, which shares an appreciation for intricate and sophisticated products. That sensibility is also at the heart of his passion for elevating the status of Hong Kong design. “I want to show that we can cherish our own cultural history,” he says. “I am happy that there are more Hong Kong brands that are trying to do that.”

Memorigin and Anpassa will be exhibiting at Salon Te at the HKTDC Hong Kong Watch and Clock Fair  from September 4 to 8, 2018 at  the Hong Kong Exhibition Centre, Wanchai, Hong Kong. Trade buyers can register for a free admission badge at the fair website or mobile site. Salon de TE also welcomes all watch lovers aged 12 or above on Sep 8.