To Yuen Tong Temple (tou4 jyun4 dung6 桃源洞), in Mui Wo, Lantau Island, is one of those Hong Kong sites that hide secrets at every turn. The literal translation of To Yuen Tong Temple is Peach Blossom Cave, but it can also be translated as Peach Blossom Spring, or even better as Peach Blossom Spring Cave, as it refers to a poem written in 421 by Tao Yuanming – one of the most important cultural references in China, which refers to a perfect place covered in peach blossoms, similar to the Garden of Eden.

The main area at street level is a large open court in between two residential compounds, and it is dotted with statues of the many divinities worshipped locally. There is Kwun Yum, reproduced in a blue and white porcelain statue and with offerings of pineapples, and a small Tin Hau wooden statue inside a glass case decorated in gold and red, with little lions standing guard. 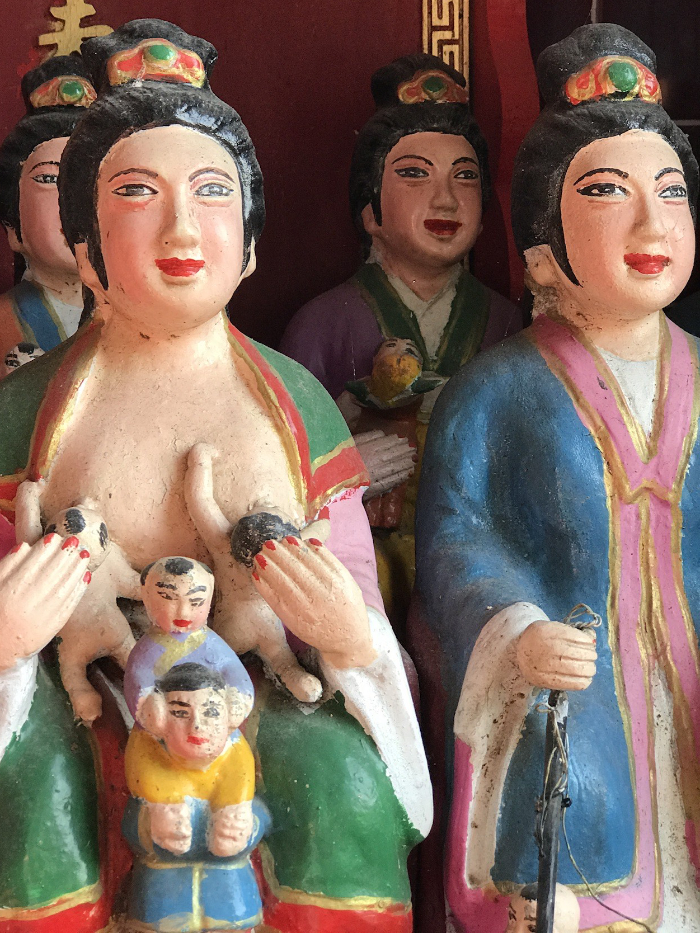 One of the Twelve Wet Nurses nursing two children

Just behind this is a more controversial hall where the temple’s management has been keeping a columbarium, in spite of complaints from nearby residents – full permission for this is still pending with the Hong Kong authorities. The real surprises, however, come as one climbs up a narrow flight of stairs decorated with flags that leads to a second temple, dedicated to Gamfa Fuyen (gam1 faa1 fu1 jan4 金花夫人), or Golden Flower Lady, and her twelve assistants, the Twelve Wet Nurses (sap6 ji6 naai5 noeng4 十二奶娘). Yet more temple halls await further up, dedicated to yet more goddesses, this time the Seven Sisters (cat1 zi2 七秭), and an assortment of more random male counterparts.

Gamfa Fuyen is one of those all-powerful female deities that appear to be particularly venerated along China’s southern coast, in Taiwan and among some overseas Chinese communities in Southeast Asia. Her story weaves in and out of Taoism and Buddhism, as is the case with many folk religion’s gods and goddesses: according to legend, and a few county records, she may have been born near Guangzhou in 1375, in the seventh year of the reign of the Ming emperor Hong Wu (who lived from 1328-1398, and reigned from 1368 until his death) and gave signs of supernatural abilities since she was ten. Some temple records describe her as a medium or shaman—a mou4 (巫)—and, as is the case with most goddesses, she died unmarried. The records concerning her biography are less exhaustive than those we have for Tin Hau – maybe because, according to some sources, she passed away at just 15 years of age, after drowning in a lake. 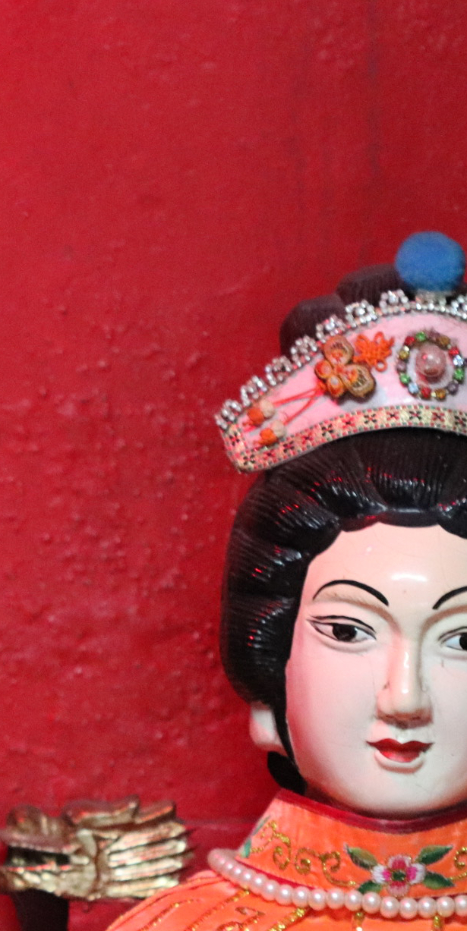 Details of the seven sisters

The miracles started after her death. Her body didn’t decompose and instead released a sweet perfume. A few days later, a wooden statue appeared in the lake, in the spot where she had died, looking like a golden flower. The statue was rescued and worshipped, and it proved capable of granting children to the women who prayed to it – which is why she is also known as Mother Gamfa. Another legend links her to the Yi group in southwestern China, where she helped lost children, and in particular children separated from their parents by war, find their way back home. This multiple origin is not unusual in Chinese folk religion: as gods and goddesses worshipped by different ethnic groups became standardised through centuries of assimilation into the Chinese empire, they became Sinicised and assumed a more Han Chinese identity, even while they often retained their previous identity in their birthplaces.

Few of these twists are apparent in Mui Wo, however, where pride of place is given to Gamfa Fuyen’s twelve assistants, the Twelve Wet Nurses. (In Mui Wo, the Golden Flower Lady is honoured only with a banner, whereas the temple in Peng Chau boasts a statue.) At the To Yuen Tong Temple they are represented in all their popular glory: dressed with bright coloured tunics that open at the front, some of them are shown with little boys sucking milk from their breasts, while others display the little boys that their patroness has, presumably, helped to conceive, in front of them – their coveted male sex in full view. They wear their hair collected in a top bun and decorated with ribbons and jewels, and wear a full face of makeup.

As visitors walk towards the To Yuen Tong Temple through a narrow path frequented by cows, bicycles and few pedestrians, they come close to one of those female cults that assumed greater importance in rural Hong Kong in years past. When women were tied to their villages in the New Territories, and their principal role was that of wives and mothers—hopefully of boys—local temples would be the main place where childless women could ask for comfort and blessings. As Hong Kong society modernised and the traditional patriarchal rules became looser, the temples that hosted Gamfa Fuyen and the Twelve Wet Nurses have become less central to a woman’s life, even in rural areas. One of the Twelve Wet Nurses, holding a baby boy But few temple complexes are as filled with female deities as the To Yuen Tong one. A few steps further up from the hall with the Twelve Wet Nurses are the Seven Sisters. In Hong Kong today there remain a few more Seven Sister temples, the most popular of which is a small temple in Peng Chau, built in the 1950s, which still sees quite a lot of worship. A smaller one is in Tsuen Wan.

The sisters are arranged in line, with the one in the middle dressed in red: she is called the Weaver (zik1 neoi5 織女), a protagonist of the legend of what is known today as Chinese Valentine’s Day (cat1 zik6 七夕) to whom women could appeal to help them acquire better embroidery skills. Unmarried women would also ask for her assistance in finding a good husband: according to the legend, she met the handsome Cattle Herder (ngau4 long4 牛郎) and managed to maintain their long distance relationship across heaven and earth by meeting once every year on the Magpie Bridge (zoek3 kiu4 鵲橋) in the Milky Way that had supposedly been built to separate them.  Their annual reunion is the seventh day of the seventh month in the lunar calendar. The Cattle Herder and the Weaver also correspond to the stars Altair and Vega, linking a local legend to larger cosmological histories. The goddess Kwun Yum is said to appear in the sky too, to bless their yearly rendez-vous. This year, Chinese Valentine day would have been August 25, however, due to the Covid-19 situation, no major gatherings will be held either in Mui Wo or in Peng Chau. The hall of the Seven Sisters in To Yuen Tong Temple The Seven Sisters covered with a silk cloth, next to the bridal bed The uncovered Seven Sisters in To Yuen Tong Temple

The iconography of the Seven Sisters is quite standardised: they wear brightly coloured and embroidered outfits and tiaras, sport pearl necklaces and are all coquettishly made up. The offerings, both in Peng Chau and in Mui Wo, show that good cosmetics are quite coveted by the goddesses, who prefer them in real form, rather than the usual paper offering type. Worshippers oblige, and at the feet of the Twelve Wet Nurses, as of those of the Seven Sisters, you can see nail polish, blush, a few lipsticks and powder.

At the uppermost level of the temple complex in Mui Wo there is a less frequently seen hall, that points even more explicitly to the fertility cult represented by the Seven Sisters, Gamfa Fuyen and the Twelve Wet Nurses: the face of the seven statues is covered by a bright piece of silk—a different colour for each sister—and just next to them is a red bridal bed. The image of the goddesses breastfeeding male babies also indicates that prayers were reserved for wives desperate to conceive.

As the pressure on women to bear children decreases, the temples will likely see fewer worshippers, but they will remain part of the local heritage, defining an evolving Hong Kong identity.

An unusual temple is a must-visit destination for Chinese Valentine's Day.