Cinema: What Happens When McDonald’s is Home? Wong Hing-fan’s i’m livin it On March 27, as Hong Kong and the rest of the world wrestled with bringing a public health crisis under some semblance of control, the government issued temporary measures designed to slow the spread of the Covid-19. To that end, fast food behemoth McDonald’s decided it would close most of its restaurants at 6pm and switch to a purely take-away and delivery model for the immediate future.

That sounded reasonable – until it became clear that this meant kicking out the hundreds, if not thousands, of so-called McRefugees who, since the Golden Arches began opening around the clock in 2006, spend their nights at a McDonald’s table. So it’s ironic that veteran Hong Kong film pro Wong Hing-fan’s directorial debut, i’m livin’ it, won’t be quite as revelatory on the issue now that the multinational chain has made headlines. Flack back to December 2019. It’s a grey day in Macau as Wong is getting ready to walk the closing night red carpet of the International Film Festival and Awards Macao. He has just done a round of press interviews, doling out sound bites, and he is taking a break in a tucked-away corner of the Macao Cultural Centre. He hasn’t yet changed into his tuxedo, but his hair—styled in a kind of semi-mohawk—is nonetheless impeccable.

When Wong is told that an earlier preview screening of i’m livin’ it elicited quite a few sniffles, he ponders the idea for a moment. “It was not my intention to make audiences cry,” he says. “The story wasn’t designed for that. I just wanted to reveal a story about this issue.”

Like many of Hong Kong’s emerging filmmakers, Wong chose to take an intimate approach to some of the social problems that plague the city rather than take his many years of film industry experience and aim for blockbuster glory. “Making a movie is not easy,” he says. “But sometimes you’ll get struck with inspiration and come up with a good story and a script.” It has been two and a half decades since he began his first film job as a general crew assistant. “Maybe making a thriller or a ghost movie would be a little easier, but I think as a new director the first movie should be a meaningful one. I wanted to make something I really loved and really wanted to do.”

Which is how i’m livin’ it came to be, in a roundabout way. Wong’s first brushes with the movies came at six or eight years old, with help from an aunt. “For some reason [she] always had free movie tickets, so she took me to the cinema a lot,” he recalls with a grin. “Then when I was 14 or 15 I started to understand that movies could resonate with audiences” – socially, politically or emotionally. He considers Japanese auteur Hirokazu Kore-eda (The Truth, Nobody Knows) an influence for his ability to draw naturalistic performances out of his actors. “I find them very authentic.”

That organic appreciation for the form led Wong to start working in advertising. He’s a self-taught filmmaker, like Christopher Nolan and Steven Spielberg, who learnt the process through experience — which he did in just under two years. Then he lucked out and got work as an assistant on various film crews in 1995 and eventually moved up to the knowledge-rich position of first or second assistant director on films such as Johnnie To’s A Hero Never Dies in 1998, producer-director Soi Cheang’s Dog Bite Dog (2006) and Juno Mak’s Rigor Mortis (2013). By the time Wong decided to strike out on his own, in 2017, he’d racked up over 35 credits.

Also factoring in to the decision to make his first feature was the 2014 death of his mother. Realising his father was ageing too lit a proverbial fire under Wong, who wanted to prove his father’s long-time support wasn’t misplaced. “I started working in cinema quite young. I didn’t make much money and my father once asked if I’d like to work with him [in the shipping industry]. But filmmaking was my ambition, my lifelong dream, and he never asked me again.”

That brought Wong to i’m livin’ it. Collaborating with screenwriter Ja Poon, the duo dove into researching homelessness and the burgeoning McRefugee phenomenon in one of the world’s wealthiest cities. Wong unearthed a diverse array of reasons the restaurants’ overnight residents were there, from being mentally ill with no overnight support to the thorny subject of Hong Kong rents being so high the working class—people with jobs—simply couldn’t afford a place to live. “I’d say 90 percent of the details in the movie’s stories were based on news articles and research we did beforehand,” he says. “I want Hongkongers, and audiences elsewhere, to know about people who spend their night in fast food restaurants. And it’s not just Hong Kong. It happens in China, Korea, Japan. It’s a universal story and a universal problem.”

Wong shot i’m livin’ it over five weeks in the autumn of 2018 with help from producer Soi Cheang, who had a hand in bringing superstar Aaron Kwok on board to star alongside Pang Ho-cheung regular Miriam Yeung (Love in a Puff, Aberdeen). At the film’s Tokyo International Film Festival world premiere in November, Kwok recalled how the script had been floating around since Cannes in May. “I saw the script at that time, and I told them that I wanted to act in the film no matter what the conditions were. I want to support filmmaking in Hong Kong.” Yeung had just wrapped a lengthy television series and Kwok jumped directly over from the set of Cold War II, which not coincidentally both Wong and Cheang worked on.

Wong considers himself fortunate to have secured a major box office draw for his first film. “I had a great cast,” he says, admitting that “Aaron didn’t have to audition.” He had discussed it with Cheang, who had landed Chow Yun-fat for the first Cold War, and Cheang told him that it was Chow’s star power that had helped get the film made. “Without him this film wouldn’t have happened,” he says. In Hong Kong, it’s still best for directors to have a star or two lined up before they start asking for funding.

Wong’s debut isn’t the first film to examine growing wealth gap and a seemingly endless cycle of poverty; the subject has been on the minds of Asian filmmakers for some time, exploding onto the international cinema stage with Kore-eda and Bong Joon-ho’s back-to-back Palme d’Or-winners Shoplifters and Parasite. When considered alongside those two films I’m livin’ it forms a neat Tokyo-Seoul-Hong Kong trilogy about life in the margins.

The story pivots on a former financial wizard, Bowen (Aaron Kwok) who has fallen on hard times, and finds himself the proverbial den father to a makeshift family that spends its nights in a burger joint – not actually named as McDonald’s despite the film’s title playing on the chain’s famed “I’m lovin’ it” slogan. Among the crew are Jane (Miriam Yeung), a middling nightclub singer, Mama (Cya Liu) a woman working herself to the bone to pay off her dead husband’s loan shark debt and raise her daughter NanNan. There’s also a teen runaway, Sam (Zeno Koo) that Bowen takes under his wing, an elderly man named Uncle Wait (Alex Man) who patiently waits for his dead wife to come and meet him, and a man struggling with an undefined mental illness, who is known as Chatting Cheung (Cheung Tat-ming). Bowen, Nan-nan and Mama settling in for a night at a fast food restaurant Sam (Zeno Koo), a young runaway and Bowen spending the night at the burger joint 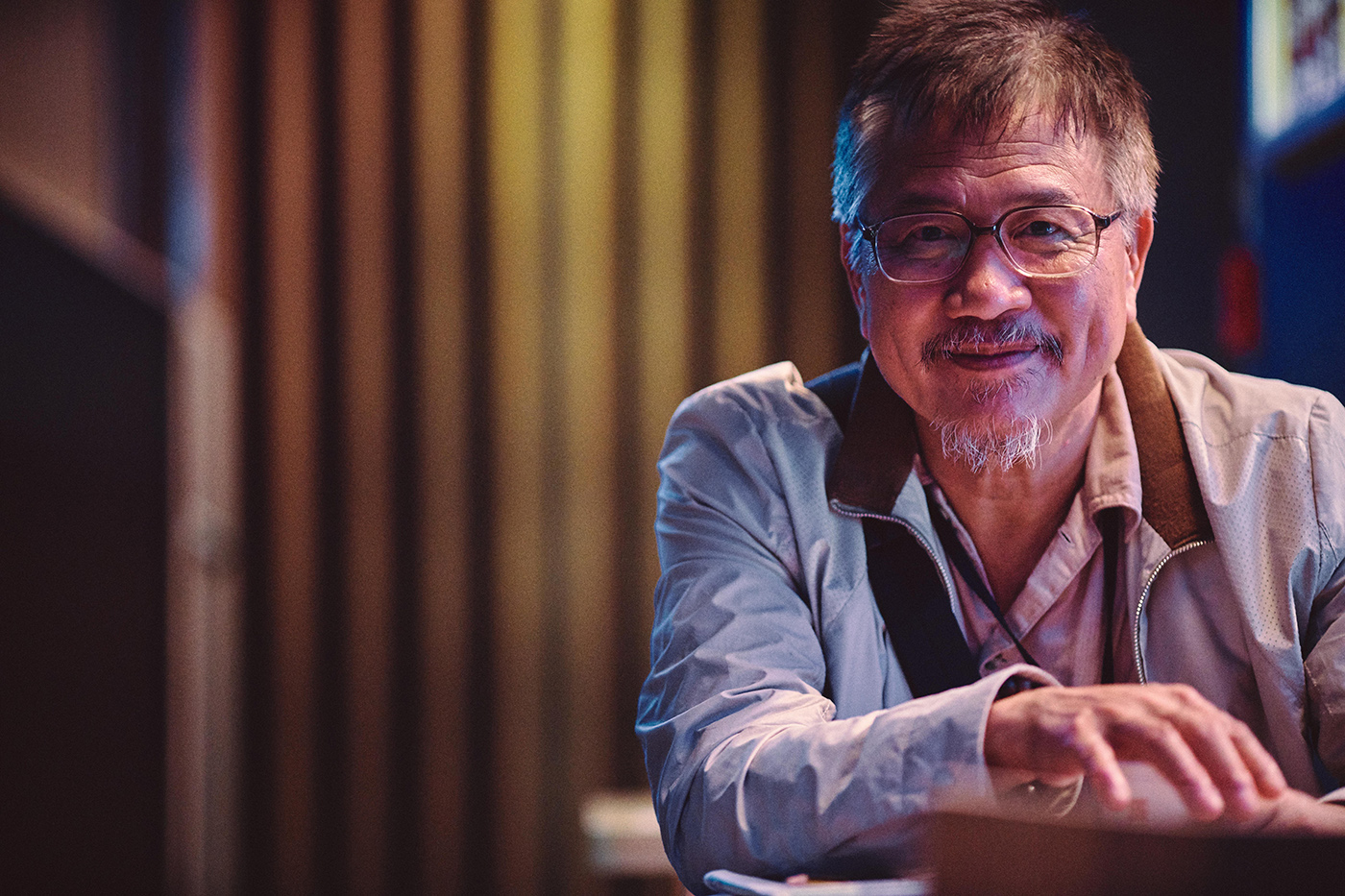 The film treats its characters with dignity even as it paints them as amalgams, keeping their personal histories obscured, underscoring how easily they could be anyone. If it succumbs to a bit of misplaced uplift from time to time, Wong’s willingness to jettison a forced, happy ending for a more realistic one is a welcome digression from Hong Kong films of the past. There’s not a lot of hope in i’m livin’ it. It feels—as Wong intended—authentic.

“Ja [Poon] and I did some volunteering while we were researching, and delivered food to the elderly,” he says. “There are always hundreds at the community kitchens.” He also noted that “community fridges” that locals stock with food for those in need—as seen in the film—really do exist in the back alleys and side streets of less privileged neighbourhoods like Sham Shui Po.

Ultimately, Wong and Poon balance enlightenment with storytelling. For every insensitive bystander that decides to shoot a humiliating phone video of Uncle Wait fighting to keep a grip on reality, there’s a genuinely kind restaurant worker to defend him, as depicted in one scene. It also quietly celebrates the overlooked communities of marginalised people that exist around all-night restaurants as well as the wider community that tries to help where it can. And while Wong is hardly a novice filmmaker, like other first-time directors he decided to tell a simultaneously specific and universal story that speaks to Hongkongers about the city they call home.

The release date for i’m livin’ it will be announced in due time.


Cinema: What Happens When McDonald’s is Home? Wong Hing-fan’s i’m livin it

A film industry veteran but first-time director, Wong Hing-fan takes a seat in the big chair for a look at Hong Kong’s working poor.