What Kind of City Do You Want? 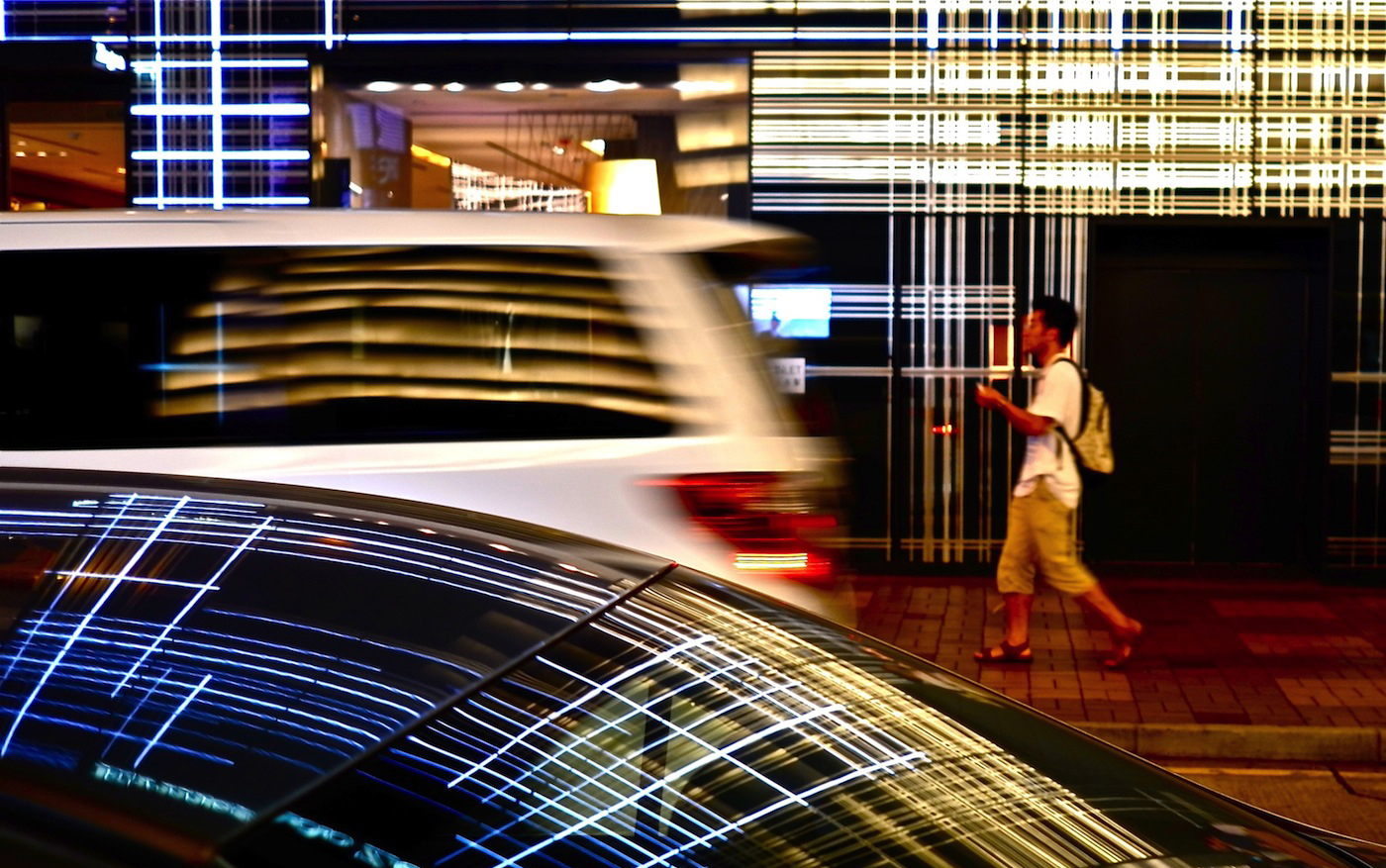 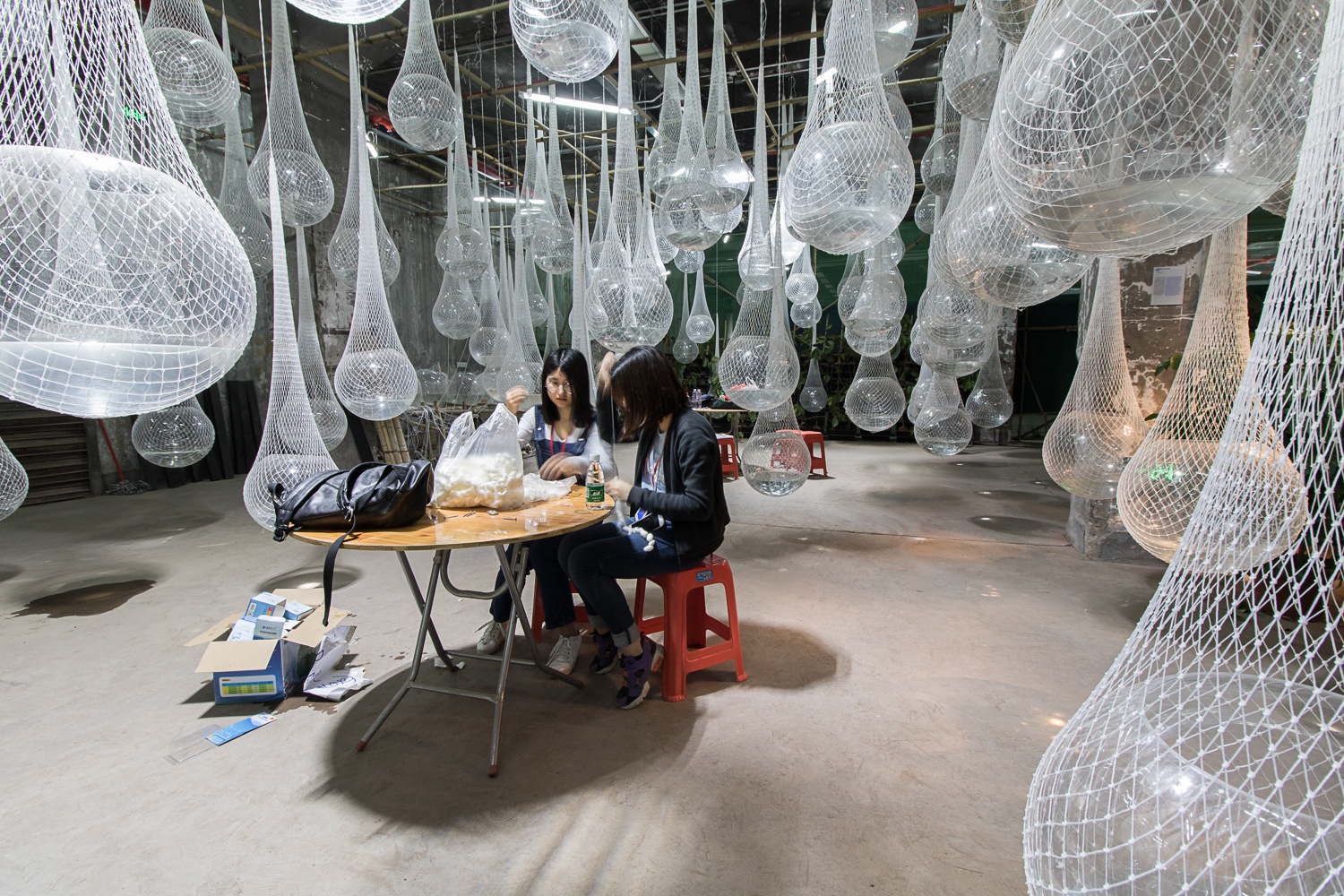 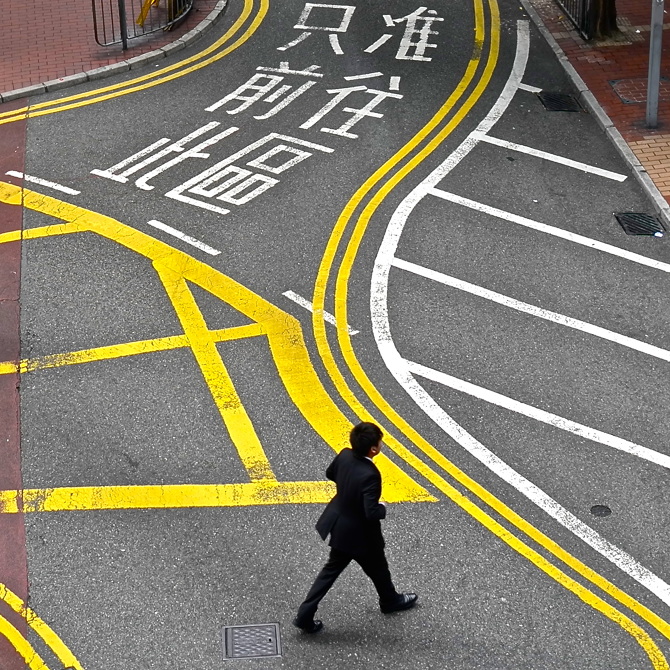 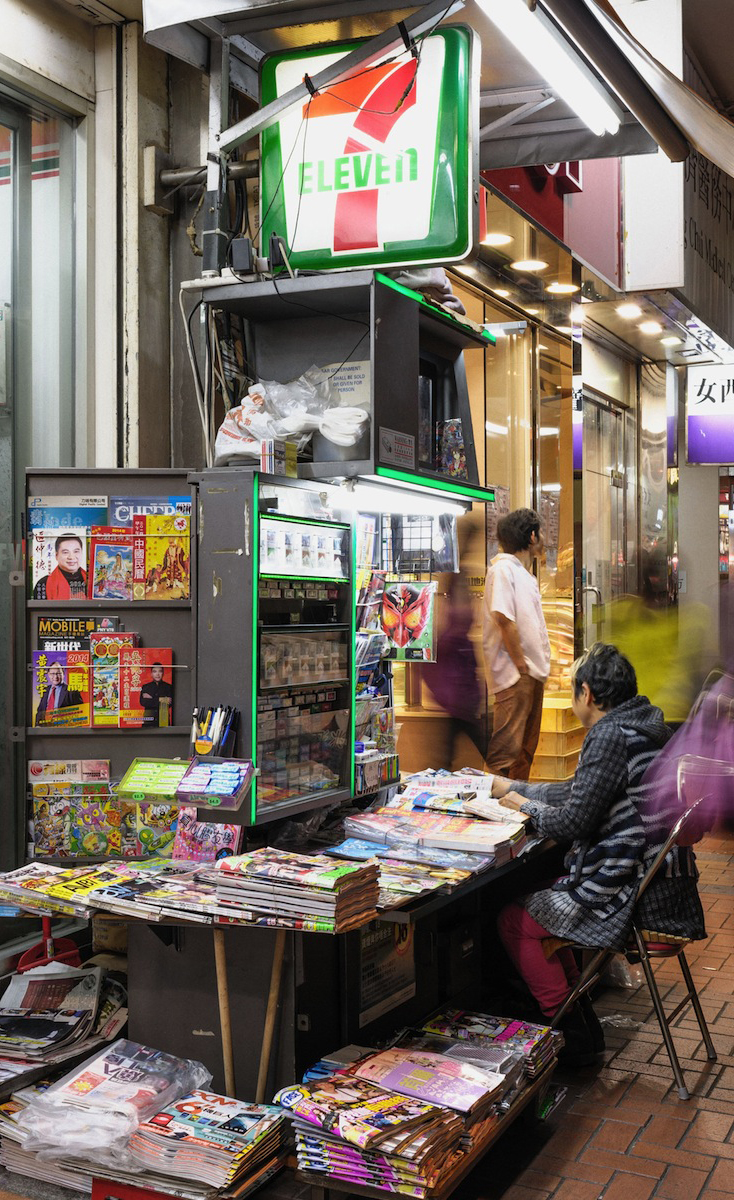 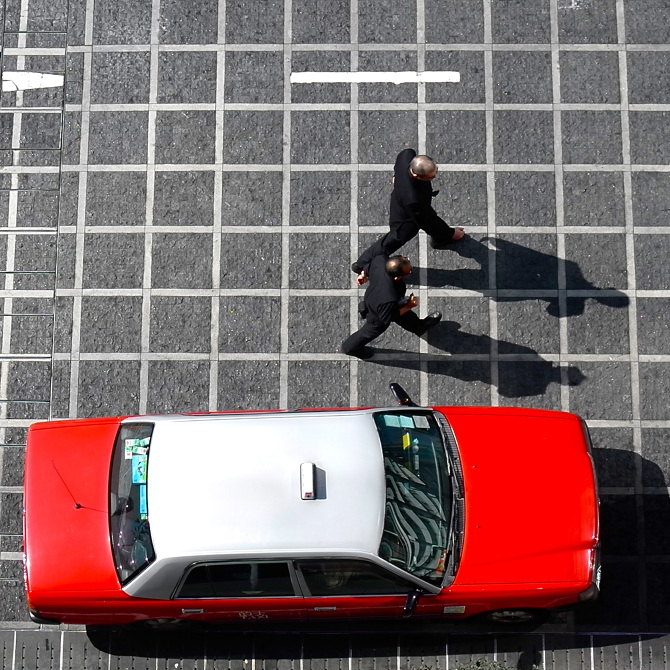 A light drizzle is falling from the sky as a spotlight is cast over the Dacheng Flour Factory. It’s the opening day of the latest Bi-City Biennale of Urbanism\Architecture (UABB), a three-month exhibition in Shenzhen and Hong Kong that raises big questions about what kind of future we want for our cities: a top-down model that prioritises economic growth above all else, or something more bottom-up that values creativity and quality of life?

“It’s not about building, it’s about unbuilding. It’s not about making boxes, it’s about breaking boxes,” says Aaron Betsky, one of UABB Shenzhen’s four curators, along with architects Alfredo Brillembourg, Hubert Klumpner and Doreen Heng Liu. “We have built enough structures but we are not using them well enough and we are not distributing the spaces we have in a manner that is equitable.”

This is an especially pertinent question in Shenzhen, where UABB is taking place in a defunct flour mill in Shekou, a waterfront suburb that is quickly shedding its industrial past for a glamourous future of luxury high-rises, shopping malls and starchitect-designed cultural centres. The biennale is at once a part of this change and a sceptical observer of its impact; even as it is funded by the Shenzhen government and China Merchants Group, one of the biggest landowners in Shekou, it doesn’t shy away from poking holes in the conventional wisdom of endless growth that has long prevailed in this part of the world. “This is an invitation for people to regain control over how to make the city,” says Klumpner.

An hour by ferry away from Shekou, the atmosphere at the Hong Kong version of UABB is markedly different, with the industrial grime of a former flour mill replaced by the thick foliage of Kowloon Park. Though it shares few organisational connections with Shenzhen — both sides of the biennale are funded and curated independently — the Hong Kong exhibition nevertheless raises many of the same issues as its northern counterpart.

“We see the biennale as a cultural event for Hong Kong to re-assess how the city is changing. For the young generation, this is a great platform for them to share their aspirations. You cannot talk about the future without talking about what we have, the legacy of what makes Hong Kong unique.”

It’s a concern that binds together both Hong Kong and Shenzhen. There are many obvious differences between the two metropolises, one a former British colony that maintains a distinctive language, identity and urban form, the other a paragon of modern China that developed almost entirely after the Deng Xiaoping’s economic reforms in the early 1980s. Crowded Hong Kong is gripped by a sense of existential crisis while Shenzhen sprawls into the future with unbridled optimism, buoyed by a new role as China’s tech capital and a fast-growing economy that has made it into the richest city on the mainland. Yet in many ways, Hong Kong offers a glimpse at a future that awaits Shenzhen. Many of the exhibits in Kowloon Park present an alternative vision of the city, one that places more emphasis on environmental and social sustainability rather than conventional economic growth. In one exhibit, a group of architects explore how to turn Des Voeux Road Central into a car-free space for pedestrians and trams. Artist Kacey Wong’s Transformer Bar II is mobile mint-growing, mojito-making stall that offers a wry commentary on urban agriculture and the government’s policy of slowly eliminating food hawkers. In another exhibit, Hong Kong-born Canadian architect Rufina Wu and German photographer Stephen Canham explore the overlooked world of Hong Kong’s newsstands. Like other hawkers, they are slowly disappearing as the government only allows their licences to be transferred to immediate family members. “Unless their spouses or their children are willing to take over the newsstand, we’re looking at the last generation,” says Wu.

For her, the newsstands are an example of the improvisational make-do attitude that creates the lively disorder so typical of Hong Kong’s streets. “Every single one of them is unique. That’s why we found them so fascinating,” she says. “Cities like London and Paris have their newspaper kiosks and those are very iconic and emblematic of the city – you see them from a distance and recognise them. In Hong Kong, all of them are kind of camouflaged with all the other stuff happening on the street. Each of them takes on a different shape and size depending on what they can use as surface areas for their displays. Each location has its own specificity that it needs to respond to.” That diversity of character is something that Hong Kong-based Korean photographer Sarah Choi explores in her work, which is displayed in Kowloon Park’s Heritage Discovery Centre during the length of the biennale. Just as Wu and Canham’s project puts a spotlight on the newsstands that blend into the urban frenzy, Choi’s photos isolate the colours and patterns that define the Hong Kong streetscape: road markings, tile walls, the distinctive accordion doors of old shops. “It shows story, it shows history or character or some personality,” she says.

Her work is sometimes compared to that of Fan Ho, whose images of Hong Kong in the 1950s and 60s use the city’s shadows and streets to create compositions that are at once abstract and full of life. Choi wasn’t aware of his work until well after she began documenting the streets. “Maybe we have the same eye, only he was 50 years ago and I’m here now,” she says. There’s also a sense that both Choi and Ho are channeling some aspect of Hong Kong’s essential character. “Some of the [photos] are very similar because we are both in Hong Kong. Even 50 years later, a lot of things have changed, but a lot has stayed the same.” Many of the exhibits in Shenzhen shed light on similarly overlooked aspects of that city’s fabric. Several touch on the topic of urban villages, the former country settlements that predate the establishment of the Special Economic Zone in 1981. Unlike the master-planned blocks that dominate most of the city, the villages grew haphazardly and organically as their inhabitants replaced traditional village houses with tenements for migrant workers from around China. Today, the villages are bastions of grassroots life, with affordable homes and retail spaces, but many of them are slated for demolition as Shenzhen’s government seeks to move away from its working-class past. That push extends to the biennale site itself. The previous edition of UABB was held in a former glassworks, while the current site, the Dacheng Flour Factory, is a similarly derelict piece of industrial land that first opened in 1980, at the beginning of Shenzhen’s transformation from an agricultural backwater into an industrial powerhouse. The transformation of both the glassworks and the flour mill into cultural hubs is part of a strategy to use Shekou’s industrial past to create what Shenzhen-based anthropologist Mary Ann O’Donnell calls a “Shekou buzz” – one that will serve to promote the many new residential, commercial and cultural developments in the area.

The flour mill has been transformed for the biennale, with a new black-box theatre, three cafés and workshop spaces – though the site still retains plenty of grit. Inside the towering grain silo that dominates one half of the site, a new viewing platform lets visitors explore the eerie interior of the massive concrete structure. Outside, the space is lit by a series of spotlights designed by German artist Seigrun Appelt, which turn on and off at random intervals. “As the light changes, the character of the space changes, too,” she says. “You can choose to stand in the shadow or the light, to observe or be observed.” Social City in the flour Mill

In Hong Kong, the choice to hold the biennale in Kowloon Park comes after protests and a boycott of the 2013 edition, which was held on the Kwun Tong waterfront. Many people from the neighbourhood’s cultural community felt that UABB was being used to promote the area’s redevelopment, which has already displaced many of the musicians, designers and artists who had found cheap industrial space to run their creative practices. But there are still a few points of contention in Kowloon Park, especially at Tree Gun Farm, where a group of urban farmers have replaced a flower bed with a fruit and vegetable patch modelled on a subdivided flat, complete with a metal-framed bunk bed that will serve as a trellis for bean vines. Nearby, sweet potatoes will soon sprout from the ground, while a papaya tree should be ready to bear fruit by the end of the biennale.

“The location here is really relevant,” says Chan Ho Lok, a member of Very MK, which maintains a network of rooftop farms around Mongkok. Chan is one of a growing number of urban agriculture activists who are trying to preserve Hong Kong’s remaining agricultural land while also promoting the growth of urban farms in Kowloon and on Hong Kong Island. The soil at Tree Gun Farm is imported from the northeastern New Territories, where family-run organic farms are threatened by development. “Pretty much every local development issue is [represented] here, from agriculture to people’s livelihoods,” says Chan.

While the government’s Leisure and Cultural Services Department has already criticised the farm for being too “messy,” members of the community seem to enjoy it. Chan says park janitors collect dead leaves to sprinkle over the farm’s soil, while a nearby Hindu temple donates vegetarian food waste to be used as compost. “Everybody is collaborating,” says Chan. “We hope this will set an example to the general public and the government that it is possible for people to participate in the management of public spaces.”


What Kind of City Do You Want?

The latest edition of the Bi-City Biennale of Urbanism\Architecture explores Hong Kong and Shenzhen – and how they can become better cities.