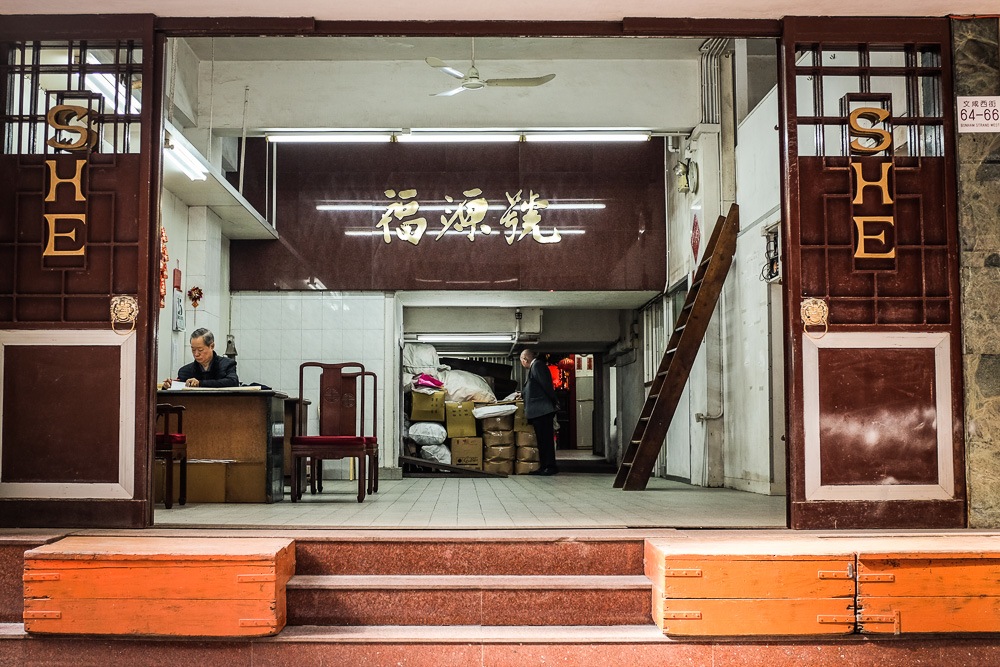 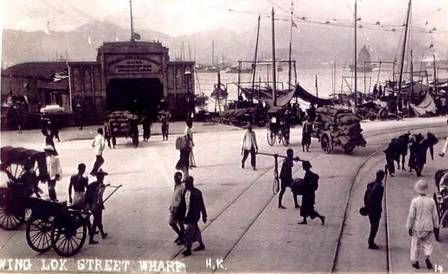 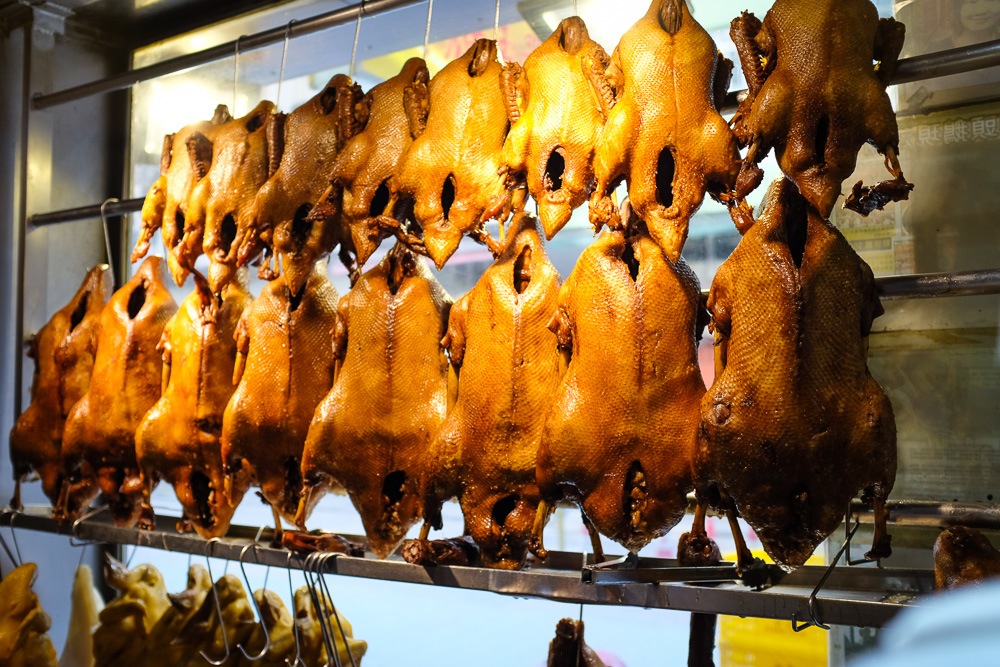 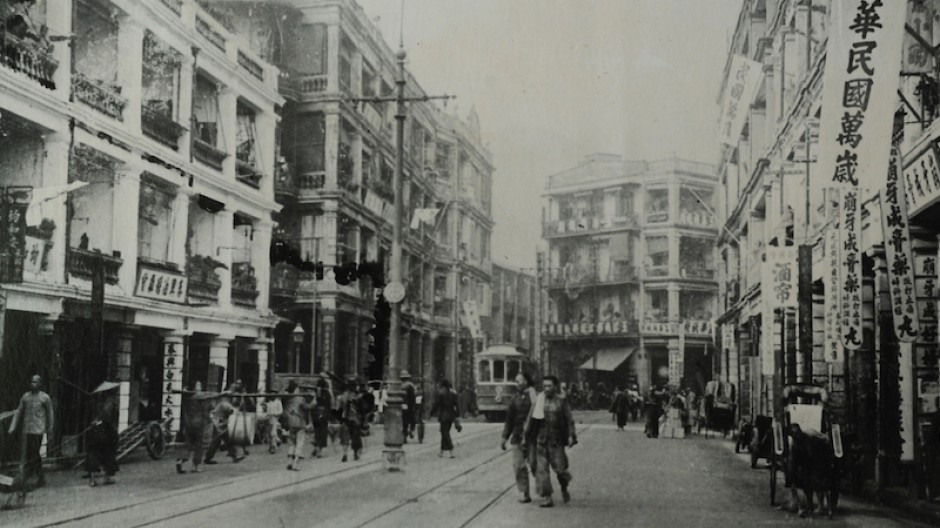 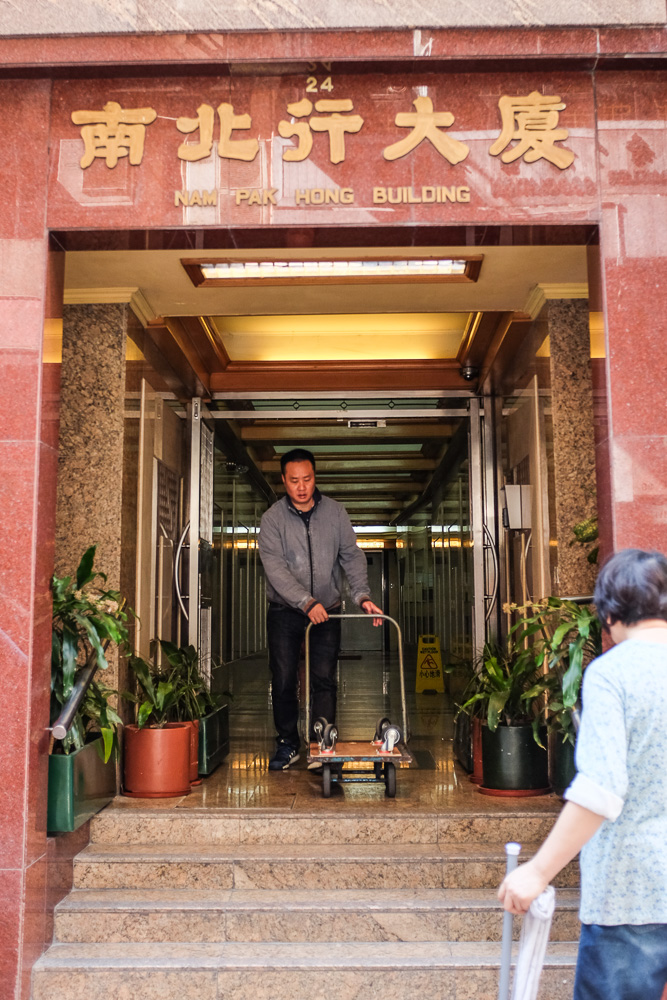 These days, the Western District has become synonymous with whatever is gentrified and hip. And while stylish new coffee joints may be mushrooming between mechanic shops and fruit stalls, some remnants of the district’s glorious past as the centre of entrepôt trade still exist. Wholesale shops still line Connaught Road and Des Voeux Road, selling dried seafood, rice and seeds, their shopfronts often busy with delivery trucks loading and offloading shipments. Though they may seem quaint today, they are a reminder of a time when this part of Hong Kong was one of the city’s wealthiest.

The Hong Kong Tourism Board now refers to the area as Ginseng and Bird’s Nest Street, but it used to be nicknamed the Wall Street of Hong Kong. Bonham Strand West (named after the third governor of the city, George Bonham) was referred to by its inhabitants as Nam Pak Hong (naam4 baak1 haang4 南北行), literally the South-North Trade. Sometimes, Wing Lok Street, also known as Rice Street, would also be included under the reference. The North was represented mainly by manufactured goods from China and Japan, while the South primarily supplied raw products and food from Southeast Asia.

The Nam Pak Hong’s principal traders set up the Nam Pak Hong Association in 1868, the first Chinese business association in Hong Kong. It acted as a union for the industry and set up trade rules, resolved disputes and even set up units for the prevention of fire and crime in the community. Their members were also some of the founders of the Tung Wah Group of Hospitals, Hong Kong’s first Chinese hospital. Even when other Chinese associations began opening around the city, Nam Pak Hong remained the largest and most powerful.

Many of the initial founders of Nam Pak Hong were from Chaozhou, a city in the east of Guangdong Province. The Teochew people from the area often refer to each other in their language as ga gi nang – “my own people.” The solidarity and kinship among Teochew immigrants around the world is one of their most noted strengths. In Hong Kong, the region and people became known by its Cantonese pronunciation, Chiu Chow (ciu4 zau1 潮州), which is still widely used today.

Chiu Chow people trace their origin to a wave of migration during the Jin Dynasty (265-316), when people escaped southwards to avoid northern nomadic groups. They eventually settled in eastern Guangdong. During the First Opium War (1839-42), many Chiu Chow people left China through the British treaty ports to find a better living abroad. In more recent history, many more escaped southwards and beyond during the Chinese Communist Revolution.

These waves of migration sent many Chiu Chow people towards Southeast Asia and Hong Kong, but their intense sense of kinship meant that powerful Chiu Chow networks were set up across the region.This link also led to the setting up of a strong Chiu Chow-Thai community in Kowloon City almost a hundred years later.

Sometimes they were referred to as the “Jews of the East,” a term first used in a Thai newspaper after King Rama VI of Thailand praised their “racial loyalty and astuteness in financial matters.” Many of Thailand’s rich merchant circles today are still dominated by Thai people of Chiu Chow ancestry. In Hong Kong, there was a difference between the well-off Chiu Chow of Nam Pak Hong and the Chiu Chow they recruited to work for them as coolies and rickshaw pullers. Around the 1850s, the Chiu Chow coolies consolidated their communities around the Kowloon Wharf and Godown Co. and the area around Nam Pak Hong known as Triangle Pier (saam1 gok3 maa5 tau4 三角碼頭) or Wing Lok Street Pier. There was a wide gap between their fortunes, but the rich Chiu Chow were devoted to clan loyalty and employed mainly their own compatriots. This explains why a large percentage of Hong Kong’s coolies at the time were from Chiu Chow. Recruiters were often sent back to the village to find men who would be willing to sign with a specific employer for at least six months, before they were allowed to look elsewhere. This indentured servitude was considered a form of indirect payment for bringing them here.

Nowadays, a walk down Bonham Strand West is a quiet one. You have to look carefully to find clues of the old Nam Pak Hong. There are two buildings which still carry its name – the Nam Pak Hong Building and the Bonham Commercial Centre, whose Chinese name is Naam4 Baak1 Haang4 Soeng1 Jip6 Zung1 Sam1 (南北行商業中心). The road is flanked by long, empty offices that open directly onto the pavement. Behind a simple desk there will be an empty chair or occasionally two women or men sitting, looking intently at books – the accounts. A few offices have an air of nostalgia to them, with wooden panelling and big Chinese signs, while others have a small team sorting through dried Chinese herbal roots. Many of them are still busy wholesalers, but their industry has been taken over by bigger importers, overshadowed by multinationals and a culture now interested in different products. Nam Pak Hong is no longer the Wall Street of Hong Kong. 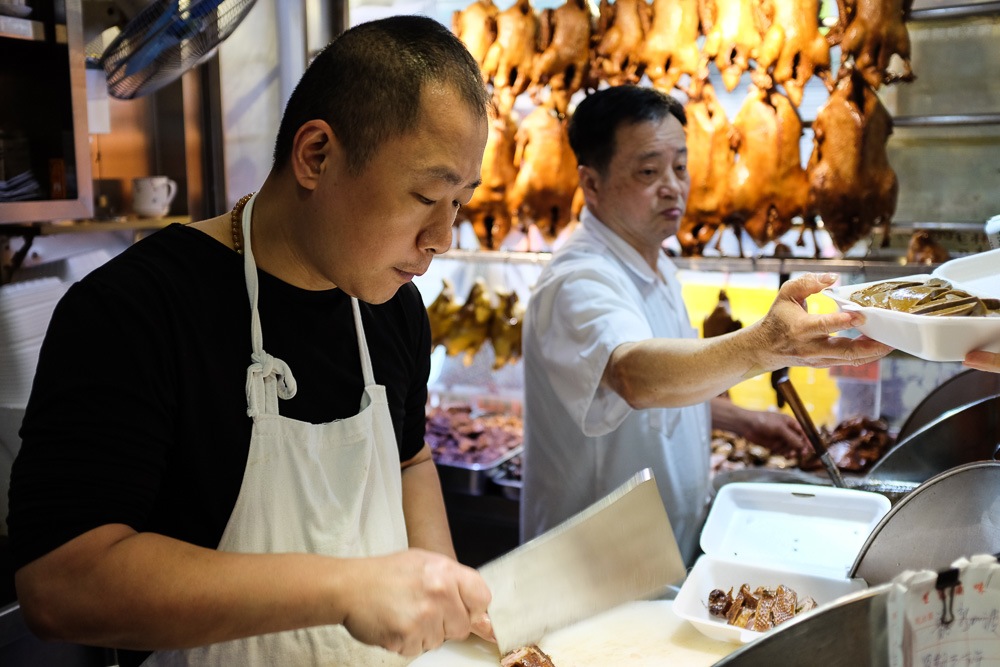 Chef is chopping up slices of braised goose, a Chiu Chow specialty – Photo by Nicolas Petit

Further down the road in Sai Ying Pun, the signs of Chiu Chow life are no longer omnipresent. Most of the dried seafood shops are not owned by Chiu Chow, but by Fujianese families or local Cantonese. While most Chiu Chow families are still very proud of their heritage and numerous community and clan organisations are still active, most individuals have blended seamlessly into Cantonese life. The most explicitly visible symbols remaining are through food.

Li proudly displays a photo of the old entrance to their restaurant. Li himself grew up on the mainland and did not move here until the late 70s, joining the rest of his extended family who were already here. His accent in Cantonese is slightly skewed and when he pours a cup of Kung Fu tea, a favourite Chiu Chow blend of potent oolong, he explains his family’s relationship with language. “My children can still speak Teochew,” he says. “Their grandmother doesn’t speak anything else, in order to communicate, they had to learn. For their future kids, I don’t know. Many young people nowadays can understand, but not speak.”

Behind him, the chef is chopping up slices of braised goose, a Chiu Chow specialty. The geese are braised for about an hour and a half before being hung up to dry while waiting for customers. The high fat content of the geese keeps the meat very tender. A steady stream of customers come in for various things, including a whole goose ordered for Lunar New Year celebrations, along with braised eggs and Chiu Chow chicken.

Li brings out a live crab and stabs it deftly under the belly with a chopstick, killing it in an instant. Cold crab is a favourite Chiu Chow dish. The crab is steamed, then refrigerated and the meat served chilled. “This is what they used to serve in the Chiu Chow snack alley – we love it,” he says. What happened to the old Chiu Chow Alley? “I think there is some tall Li Ka Shing building now in its place,” says Li.

Li Ka-shing is Asia’s richest man, with an estimated fortune of US$27 billion. He is also a Chiu Chow person – no doubt the most famous in Hong Kong. He embodies the classic rags-to-riches story and the fulfilment of the Hong Kong dream that so many Chiu Chow immigrants had when they first arrived. Though the Chiu Chow may no longer be the barons of Hong Kong’s Wall Street, nor the guardians of the city’s food staples, they have left a strong imprint on Hong Kong’s social services, local culture – and of course, its supply of delicious succulent goose.

Chiu Chow people from eastern Guangdong are one of Hong Kong's most formidable ethnic groups, transforming a section of Western District into an international trading powerhouse. There are still remnants of the old Chiu Chow neighbourhood left today.