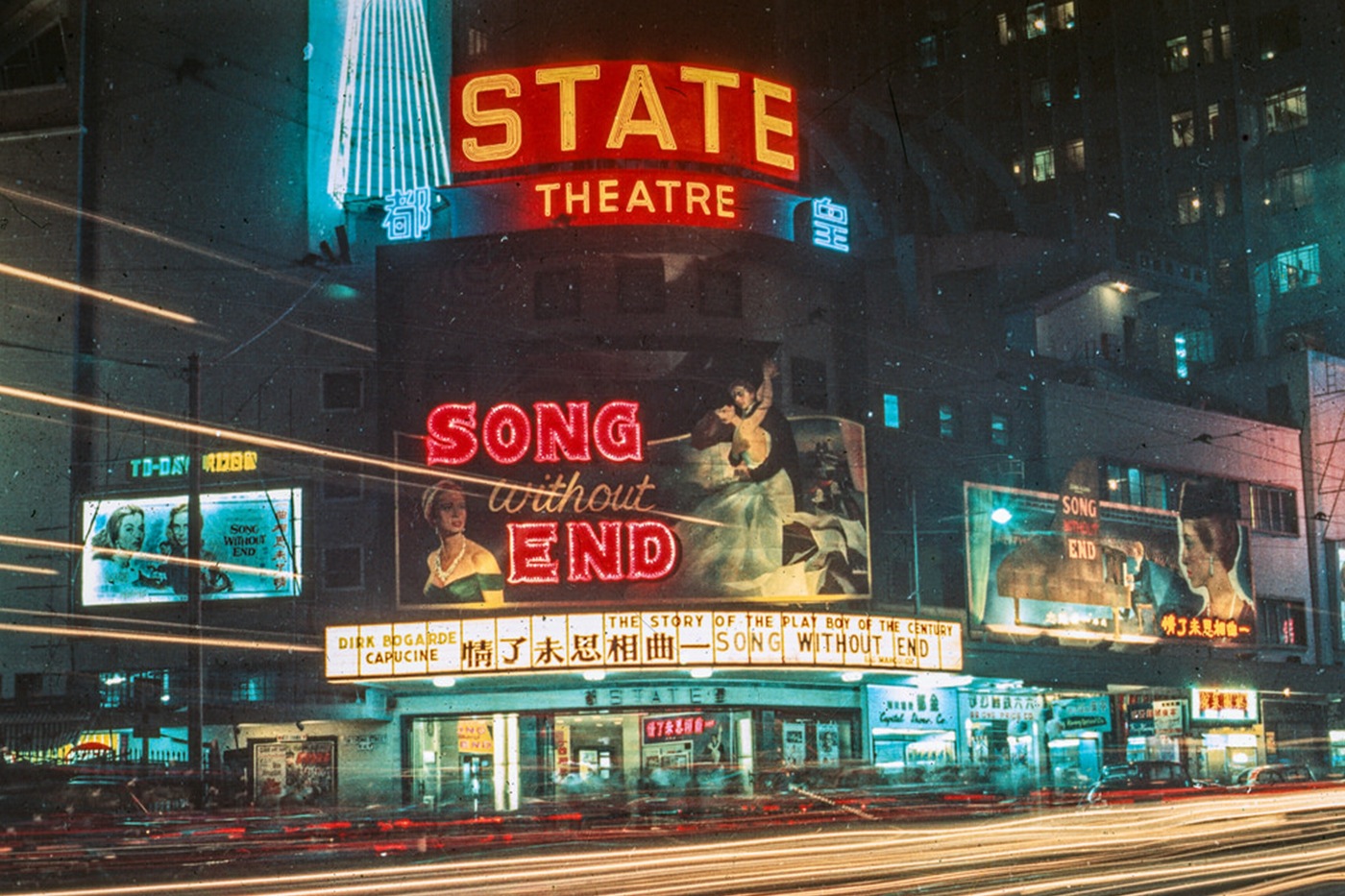 Sixty years ago, people in Hong Kong didn’t have to travel far to find entertainment. Neighbourhoods all across the city were filled with neon-lit theatres that showcased local flicks and Hollywood hits.

Growing up in 1960s Yau Ma Tei, shipping clerk Cheung Chi-ying remembers having the choice of six different cinemas within walking distance of his family’s flat. “Each one targeted a different class of audience,” he says. The Universal Theatre showed Hong Kong-made movies, while the London Theatre showed Hollywood films. The Majestic Theatre was the cheapest option, with a programme of “second-tier” Western films without any Hollywood cachet.

These cinemas helped Hong Kong become the movie capital of Asia. By the 1980s, Hong Kong was producing more than 300 films per year, and they found no shortage of eager eyeballs. But the local film industry began to decline in the 1990s, and so did the number of local screens. Bit by bit, the old movie palaces disappeared. Now there is just one left – and it too is at risk of disappearing, despite being awarded Grade I heritage status in December.

The State Theatre has stood on King’s Road in North Point since 1952, when it was built as the Empire Theatre by Harry Odell, a Cairo-born Jew who settled in Hong Kong after World War I, became a stockbroker and married a socialite. After fighting to defend Hong Kong during World War II and spending the Japanese occupation in a POW camp, he got into the film business. “I emphasise here that this is not just another theatre,” Odell told the South China Morning Post just before the theatre’s opening, and he wasn’t kidding. There was nothing else like it in Hong Kong: a 56-foot cinema screen, 1,400 seats, a diamond-shaped ceiling and an underground car park.

Even more remarkable was its architecture. The whole theatre is held up by a distinctive parabolic roof trusses that were lit up at night. Lee Hoyin, director of the University of Hong Kong’s architectural conservation programme, says no other building in Hong Kong has this kind of structure. “As far as I know, it is very likely to be one of a kind in Asia,” he says.

The theatre opened with a screening of Just For You, a comedy musical starring Bing Crosby and Jane Wyman, but it didn’t limit itself to movies. “I only associate myself with the finest of artists,” declared Odell, who brought some of the world’s top classical musicians to Hong Kong. The Empire Theatre was a cultural beacon for people from all walks of life. “Hong Kong was a cultural desert at the time, and Empire Theatre was a flower blooming out of a desert,” Darwin Chen, former culture chief for the Hong Kong government, told the South China Morning Post last year.

In 1958, Odell sold the theatre to Hong Kong Enterprises, which owned the Queen’s Theatre in Central. The new owners built an apartment block and shopping arcade next to the theatre and changed its name to the State, but they maintained the venue’s mixed programme of live performances and film screenings. And while the opening of City Hall in 1962 eclipsed the theatre as Hong Kong’s top cultural destination in 1962, it kept a certain amount of cachet, playing host in 1970 to Taiwanese singer Teresa Teng, who at 17 years old was already a rising star in Chinese pop music.

The State Theatre finally closed its doors in 1997 and was later converted into a snooker hall. Its distinctive façade was obscured by billboards and it seemed to recede into the increasingly grimy landscape of King’s Road, another tired concrete building in a neighbourhood whose glory days had passed. In recent years, property companies began buying up flats and shops in the State Theatre’s adjacent tower block, and it seemed like it would suffer the same fate as Hong Kong’s other grand cinemas.

The State Theatre shortly after its opening in 1952. Photo courtesy Haider Kikabhoy

That’s when heritage activists took notice. “I’ve always loved the building – I find it mesmerising,” says Haider Kikabhoy, co-founder of Walk in Hong Kong, which organises heritage-focused walking tours. Kikabhoy grew up in Quarry Bay and passed by the theatre often, though he never saw a film there. His work partner, Wendy Ng, has an even deeper connection: her mother owned a children’s clothing store in the State Theatre shopping arcade. “She spent ten years of her childhood there.”

News that the State Theatre may be demolished unleashed a flood of memories from people who remembered its glory days, when it and other venues like it were the building blocks of Hong Kong’s popular culture. “The public was really switched on,” says Kikabhoy. “I suspect you’ll get similar reactions for a lot of postwar buildings. They’re still around, so they’re still part of daily life.”

Despite the public support, Kikabhoy knew it would be an uphill battle. In 2015, one of the last corner pawn shops in Hong Kong, the Tung Tuk Pawn Shop in Wan Chai, was demolished despite a last-minute public outcry. Kikabhoy remembers the chairman of the Antiquities Advisory Board (AAB) telling activists that their campaign was too little, too late. “That comment really stuck with me,” he says. “It was a kick in the teeth.”

The State Theatre was already on a list of buildings whose heritage value would be assessed by the AAB, which can assign one of three grades to historic buildings. Grade I is the highest grade, awarded to “buildings of outstanding merit, which every effort should be made to preserve if possible.” That doesn’t offer any legal protection against demolition, but it does give the government the mandate to step in and negotiate with property owners if they want to tear the building down. A Grade I building with particularly high value can be designated a Declared Monument, which is the only category that actually bars demolition.

The heritage assessment system hasn’t changed since the 1970s, and its lack of legal weight puts it at odds with conservation policies in many other cities. Kikabhoy wasn’t optimistic about the State Theatre’s chances. “We never thought there was a chance it could be saved,” he says.

Things didn’t look good last spring, when the Antiquities and Monuments Office (AMO) delivered a report to the AAB that recommended a Grade III rating, which only requires a building to be documented in photographs before it is demolished. “The AMO didn’t really have a full grip on the story,” says Kikabhoy. The AMO argued that the State Theatre’s interior had been altered, which reduced its heritage value, but when an AAB member asked exactly how the interior had been changed, the AMO wasn’t able to answer. In response, the AAB postponed the hearing to give the AMO more time to research. The State Theatre in 2016. Photo by Haider Kikabhoy

Though the AMO’s mission is to protect Hong Kong’s heritage, its members seem to take a very narrow view of what is worthy of protection. After the botched presentation to the AAB, journalists from RTHK spoke to several members of the AMO’s five-person board. Their attitudes were remarkably flippant. Historian Stanley Siu suggested that only ancient monuments were worthy of the government’s full protection. “If a Han dynasty tomb is worth five points [on my marking sheet], and a Qing dynasty building scores four points, then how many points can I give State Theatre?” he asked.

Another board member, architect Louis Lor, dismissed the theatre as “a very simple structure.” He cast doubt on its cultural value. “Whose collective memories are we talking about? Teresa Tang might have performed at State Theatre, but my son doesn’t know who she is.”

Kikabhoy could hardly believe that these words came from the people tasked with conserving Hong Kong’s heritage. “We realised we’ve got to beat the government at their own game,” he says. “We had to do our own heritage assessment.” They began asking experts for their help, which led them to Jos Tomlow, an engineer and professor of architecture at University of Zittau/Görlitz in Germany, who examined the State Theatre’s unique roof structure and declared it to be unique in the world. The assessment also revealed that the AMO was wrong about the interior: although false ceilings had been installed when the theatre was converted into a snooker hall, the original structure remained intact.

Kikabhoy thought the new assessment would be enough to win the State Theatre a Grade II rating, but they got a surprise when they presented their case to the AAB late last year: the board voted 14 to 8 to rate the theatre as a Grade I structure.

The high rating sets an important precedent for the conservation of postwar architecture. Very few buildings from the 19th and early 20th centuries are left in Hong Kong, and most of those are churches, temples, government buildings and other institutional landmarks. Buildings from the 1950s and 60s are less rarefied, which makes them the new frontier for heritage conservation. “They were built during the postwar population boom – they are buildings for the people,” says Kikabhoy. This is the quality that makes them so significant, but as the comments from AMO panel members shows, it also makes it easy to dismiss them as too ordinary to be worthy of conservation.

The path forward for the State Theatre still isn’t clear. The government has a programme that pairs historic buildings with non-profit organisations that operate them for the public – the same programme that led to the conservation of the PMQ, another mid-century landmark. But that would require the government to buy the State Theatre, which doesn’t seem likely at the moment. Kikabhoy says a buyout or a land swap, in which the owner is given a similarly valuable piece of land elsewhere in exchange for giving the theatre to the government, would be “complicated, very costly and controversial. It’s in the nature of the bureaucracy to avoid tricky situations.”

Darwin Chen has proposed that the government lease the theatre from its current owner and run it as a repertory cinema and performance venue. Others hope the theatre could be reopened as a private enterprise. Whatever the scenario, it could be a chance for Hong Kong to save an icon and build a new future for its past.

Despite receiving the city's highest heritage grade, the 1950s-era State Theatre is still at risk of being demolished.