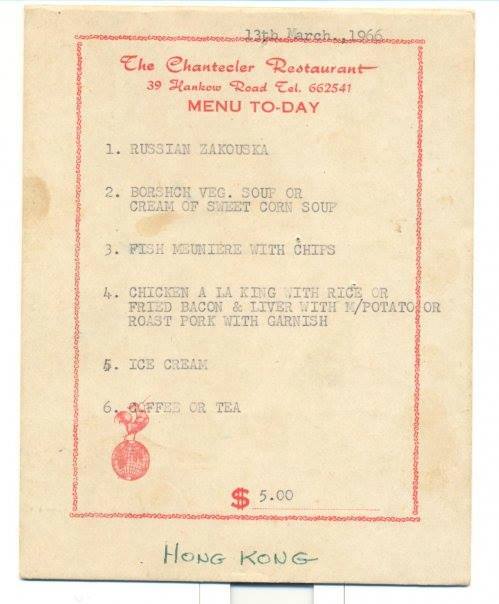 Stanley Yu sips a coffee and looks around at the restaurant his family has owned for 65 years. “Queen’s Café is not just a restaurant to me,” he says. “I grew up with it. I remember my grandfather coming home from work with the smell of the kitchen on his body.”

This isn’t exactly the same restaurant that Yu’s grandfather opened in 1952. That first location was a few blocks away, on King’s Road in North Point. Since then, Queen’s Café has expanded to three other branches, though a few touches of the original remain. “These are the lights from the original restaurant,” says Yu, pointing to the vintage wall lamps that surround the dining room. They blend in easily with the rest of the decor. Dark wood tables, leather banquettes and white curtains evoke another era. So does the menu. Though Queen’s Café is often associated with the “soy sauce Western” cuisine that emerged after World War II, it is actually a remnant of a time when many of Hong Kong’s most famous restaurants were run by Russian émigrés. “Borscht, beef stroganoff, chicken kiev” – Yu lists some of the classic dishes at Queen’s Café. His grandfather, Mischa Yu, trained in Russian restaurants in Shanghai, and when he came to Hong Kong, he made the dishes he knew best. “Back in the 50s there were a lot of Russians in Hong Kong,” says Yu. “At the time, Western food in Hong Kong was Russian food.”

Hong Kong was a transient place for much of its history, a stepping stone for Chinese migrants on their way to California or Australia, a layover for British colonials, and a temporary refuge for those caught up by the waves of history. Once powerful communities have vanished, like the Portuguese who dominated civic life for a century. The Russians came and went, too – but not without leaving a trace.

When the Bolshevik Revolution led to the collapse of the Russian Empire, more than a million loyalists — known as White Russians, in contrast to the “red” Bolsheviks — fled the country. By the mid-1920s, more than 300,000 of them lived in China, mostly in the cities of Harbin and Shanghai. At first, they enjoyed a comfortable life, especially in Harbin, which was a de facto Russian colony and the headquarters-in-exile of the Russian Orthodox Church. When China officially recognised the Soviet Union in 1924, however, White Russians were rendered stateless, and Russian enterprises in Harbin were repopulated with Soviet citizens.

Many refugees struggled to find work. Some had served in the imperial Russian military, which made them attractive as security guards and policemen; in the early 1930s, around 30 White Russians were hired by the Hong Kong Police to serve in a special anti-piracy force that consisted of around 100 men. Others drifted around China, trying to make a living in an increasingly unstable country.

That was the case for George Pio-Ulski, a musician who had fled Vladivostok for Harbin as a teenager in 1924. He passed through Shenyang, Beijing and Qingdao before ended up in Shanghai, where he found work in a series of hotel orchestras. In 1934, while working at the St. George’s Hotel, he began dating a young woman named Lila Nozadze, whom he had spotted dancing in the hotel’s ballroom.

Russians in the Hong Kong Police, 1930

Nozadze had her own itinerant history. In 1917, her mother was living in Baku, Azerbaijan, when she received a call from her military husband, who had fled with the retreating White Russian army to Vladivostok. She embarked on a nearly 12,000-kilometre journey to join him, and it was on this voyage that Nozadze was born. Once the family was reunited in Vladivostok, they travelled south to Shanghai, where Nozadze’s parents scraped by doing odd jobs.

When the Japanese invaded Shanghai in the autumn of 1937, Nozadze and Pio-Ulski fled yet again, this time to Hong Kong, where Pio-Ulski had found a job with the Hongkong Hotel Company. He was a busy man, playing in the orchestra at the Hongkong Hotel, The Peninsula and the Repulse Bay Hotel. Nozadze was hired to work at a local shop called the Linen Chest. “I think those years were happy for both of them, judging from their smiling faces on all the photos taken at the time,” says the couple’s daughter, Nona Pio-Ulski Langley.

That happy life was shattered when the Japanese invaded Hong Kong in December 1941. As stateless refugees, Pio-Ulski and Nozadze were spared the concentration camps where Allied citizens were kept prisoner, but historical records suggest that they may have aided a British intelligence unit during the occupation. Details are murky and Langley’s parents never elaborated. “They were so circumspect – they never spoke about the war, they never spoke about anything in the past,” says Langley. 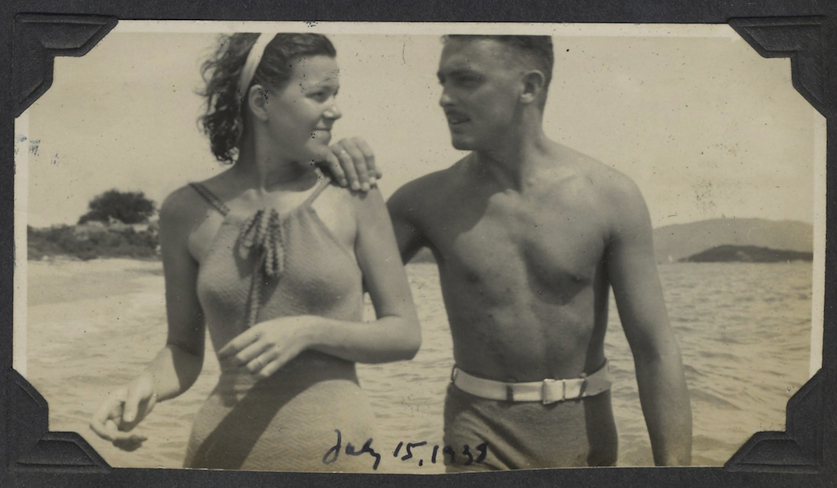 She was born two years after the war, in 1947, and she recalls a comfortable youth in Hong Kong. “Life was sweet,” she says. Her father continued playing music, but he also began working as a civil servant for the government, and he eventually found a cushy expatriate job with Hongkong Tramways. The family had lived on Morrison Hill in a flat upstairs from another Russian family, the Vargasoffs, but after Pio-Ulski was hired by Hongkong Tramways, they moved into a company house on Broadwood Road. Langley remembers it as a big three-storey house with a large garden that contained three flame trees.

Community life revolved around the Russian Orthodox Church, whose Hong Kong parish opened in 1934 at 12 Essex Crescent in Kowloon Tong. But few of Hong Kong’s White Russians saw the city as more than a way station. Haunted by decades of war and exile, Langley’s parents were keen to forge a new identity. “My parents didn’t speak Russian to me or my sister – I think they wanted us to grow up British,” she recalls. Her father went so far as to change their surname from Pio-Ulski to Parks. “They wanted to leave all of that behind.”

But Hong Kong at the time was a highly stratified society, and British colonials weren’t eager to accept Russian refugees on equal terms. That was especially true after 1949, when many of China’s remaining Russians fled the mainland after the Communist Revolution. When they arrived in Hong Kong, they faced discrimination and low pay. “Taboos about specific forms of interaction with the Russians were as strong as those for Asians,” notes historic Robert A. Bickers in his book Britain in China. 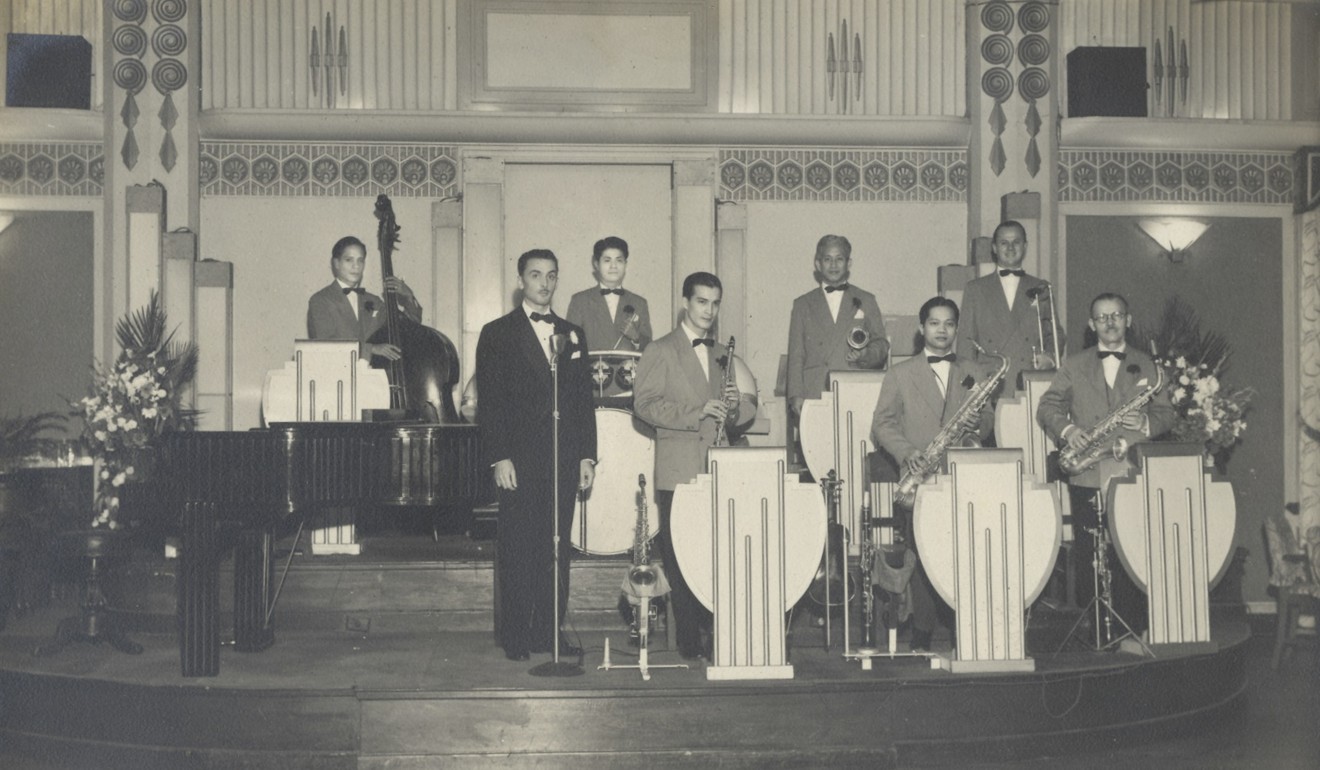 The colonial government initially planned to build refugee camps on Lantau for the new arrivals, but eventually decided to accommodate them in boarding houses and other private accommodations. Many White Russians earned money as domestic helpers and construction workers, which they supplemented with allowances from the United Nations. (Today, the UN still deals with asylum-seekers in Hong Kong, but the government now prohibits them from working, leaving many in a precarious situation.) All told, about 20,000 White Russian refugees passed through Hong Kong in the decades after World War II.

As someone born in Hong Kong, Langley passed for British, especially after her family changed their name. But she still encountered hostility. “They would ask what part of England I was from, and I said, ‘Actually, I’m not English,’ and when I went through the whole thing of telling them my background, suddenly they weren’t so chummy,” she says. At one point, she was engaged to a British naval officer, but he dumped her when he realised that marrying a Russian would hinder his military career.

Meanwhile, Russian restaurants began to crop up around the city: Cherikoff’s, Chantecler and Tkachenko’s were just a few of the more famous examples. Their bakeries produced Russian cakes and pastries and their dining rooms served a huge range of Russian and Western dishes. The daily set menu for Chantecler, located on Hankow Road in Tsim Sha Tsui, began with a selection of zakouska (Russian hors d’oeuvres), followed by a bowl of borscht, fish meunière with chips, and chicken à la king. Ice cream was served for dessert, along with coffee or tea.

“Some of my students still remember Tkachenko’s cakes,” says Irina Ustyugova, a Russian teacher who moved to Hong Kong from Moscow in 2008. “Even today, if you look at the cakes in a local bakery like Maxim’s, with the layers of cream – this is the Russian way of decorating cakes.”

Most of the White Russians left Hong Kong for Australia and the United States in the early 1960s. After school, Nona Langley worked for HSBC until 1974, when her father retired from the tram company. The entire family then left to join relatives in Perth. “I hated it,” she says. “I felt at home in Hong Kong, but when I came to Perth, I was teased for being a new Australian.” But life in the Western Australian capital was affordable, and Langley soon met a Royal Navy officer named Philip, who she went on to marry. “He wasn’t your usual Englishman – he didn’t mind marrying someone with a Russian background,” she says with a laugh. Langley returned to Hong Kong just once, in 1980, and found that it had already changed so much it no longer felt like home. She put her memories aside for decades as she raised a family in Perth. “It was only after my parents died that I found this great suitcase full of stuff, full of photographs and things,” she says. “Then I cursed myself for not being interested in this when I was young.”

Langley now runs a website that delves into her family’s history and that of the broader White Russian community in China. She isn’t alone in her interest. Many former Russian émigrés have reconnected on social media to swap memories. Here in Hong Kong, Russian-speaking expats are launching the first Russian Culture Week, which will include a walk through the Happy Valley Cemetery, where historian and journalist Kira Pozdnyaeva will explain the history of the local Russian community.

Irina Ustyugova says the White Russian history adds an extra layer of meaning to her experience of Hong Kong. “It’s a part of Russian history that disappeared and I didn’t have a chance to meet it,” she says. She describes the Culture Week as a way to “announce to people that we are here.” Today, there are about 2,000 Russian nationals in Hong Kong, with even more Russian speakers from former Soviet countries such as Kazakhstan. The historic White Russian community, however, has vanished.

But its legacy lives on, at least in Hong Kong cuisine. Borscht, known in Cantonese as lo4 sung3 tong1 (羅宋湯 – literally “Russian soup”), is a staple of many local cha chaan teng, although here it is made from tomatoes and cabbage instead of beetroot. At Queen’s Café, many families have been customers for two or three generations, and Stanley Yu says he intends to keep things as faithful to his grandfather’s vision as possible. “If we don’t do it, no one else will,” he says. “We are one of the only ones left.”

Correction: An earlier version of this story misstated the name of Hong Kong’s police force in the 1930s. It was the Hong Kong Police, not the Royal Hong Kong Police. The “Royal” prefix was not granted by Queen Elizabeth II until 1969. We regret the error.

As many as 20,000 Russian refugees passed through Hong Kong in the 20th century. They left behind a fascinating historic legacy.